The development of cross-border hydroelectric projects (HEPs) with the neighbouring countries has witnessed some momentum in the recent years. This is largely attributed to the huge hydropower potential in South Asia to meet the growing power demand of countries in the region, complement domestic generation during seasonal variations and exploit the spatial location of the neighbouring countries with regard to the load centres. Although significant hydropower capacity has been developed under the Indo-Bhutan partnership, considerable capacity is expected in the coming years. 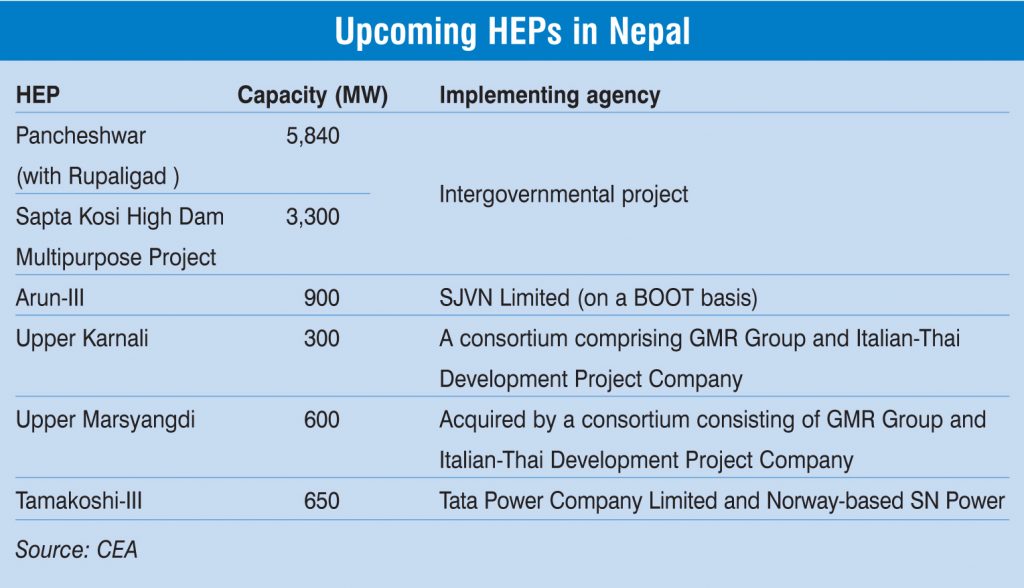 Nepal offers another avenue for developing cross border HEPs. Currently, the country exports electricity to India. However, the scenario might reverse in the coming years, once the projects under discussion are commissioned. Currently, HEPs aggregating 51 MW of capacity have been set up in Nepal under the Indo-Nepal energy cooperation agreements. These are small HEPs (below 25 MW of capacity) namely the 21 MW Trisuli HEP, the 15 MW Western Gandak HEP, the 14 MW Devighat HEP and the 1 MW Pokhra HEP.

Two HEPs namely the Pancheshwar/ Rupaligad HEP and the Sapta Kosi High Dam and Sunkosi Diversion cum Storage HEP, aggregating over 9,000 MW of capacity are under discussion. For the 5,840 MW Pancheshwar/Rupaligad HEP, a draft DPR prepared by WAPCOS Limited in November 2016 is currently under examination and appraisal by various departments of the Indian and Nepalese governments. The project involves the construction of a dam with live storage and two underground powerhouses, one on each bank of Pancheshwar river with a total installed capacity of 4,800 MW. It also includes the construction of a dam with live storage with two underground power stations, one on each bank of the river at Rupaligad with an installed capacity of 240 MW. The project entails a total cost of around Rs 331.08 billion and is expected to generate over 9,000 GWh power during a 90 per cent dependable year. Another project namely the 3,300 MW Sapta Kosi High Dam Multipurpose Project is expected to generate 15,730 MUs of electricity. However, its development is being affected by the law and order situation in Nepal.

Besides these projects, the government of Nepal has awarded a contract to SJVN Limited for setting up the 900 MW Arun-III HEP on a build-own-operate-transfer (BOOT) basis for a period of 30 years. As per the MoU, SJVN will provide 21.9 per cent of power to Nepal from the run-of-river project without any charge and pay 7.5 per cent of total income as royalty to the Nepal government. The project is scheduled to be commissioned in 2020-21.

Another key trend is the growing participation of Indian private companies in Nepal’s hydropower segment. On this front, a consortium comprising GMR Group and Italian-Thai Development Project Company of Thailand is implementing the 300 MW Upper Karnali HEP, a run-of-the river project in Western part of Nepal on a BOOT basis. GMR Energy will provide 12 per cent of free power to Nepal and pay 27 per cent free equity to the Nepal government. The project entailing an estimated cost of Rs 87.50 billion is expected to generate 3,466 MUs of power annually. Further, the consortium is developing the 600 MW Upper Marsyangdi HEP in Nepal. Located in Lamjung and Manang districts, the project is being developed by Himtal Hydropower Company Private Limited, a Nepalese subsidiary of GMR Energy Limited. Besides, the Nepalese government has signed an MoU with Tata Power Company Limited and SN Power, Norway for developing the 650 MW Tamakoshi-3 in Janakpur Zone. The project entails an annual power generation of 2,340 MUs. 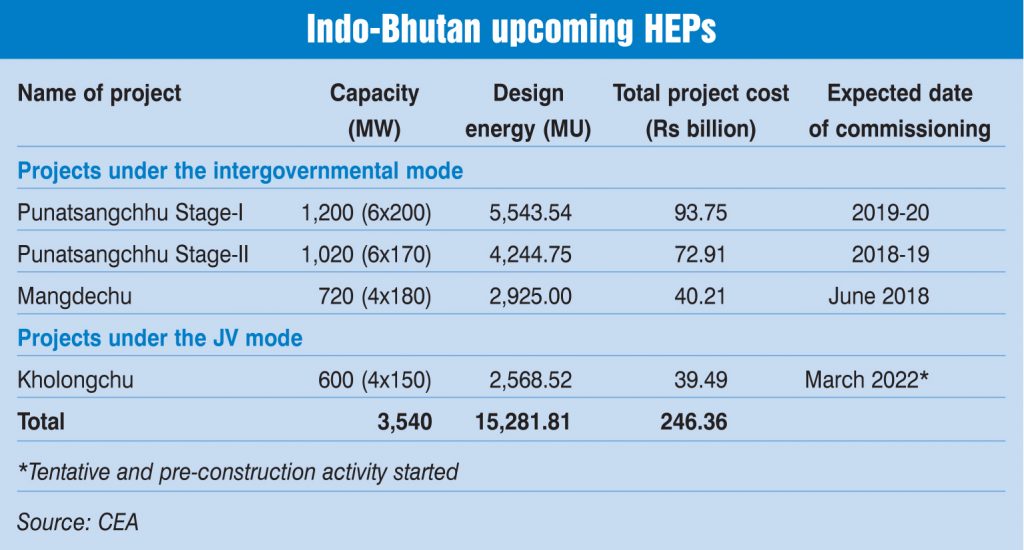 With the aim to facilitate the cross-border trade of electricity, one of the noteworthy steps was the issuance of guidelines on the cross-border trade of electricity by the Ministry of Power in December 2016. The guidelines aim to align the cross-border electricity transactions with the existing laws and requirements for physical infrastructure development, reliable and stable system operations, economic and commercial aspects, and settlements and reconciliation of the obligations. The guidelines can prove to be a turning point in the creation of a regional electricity market and a robust cross-border electricity infrastructure. Further, the guidelines give preferential treatment to overseas power generators and trading companies, in which the majority stake is held by Indian companies (public or private). In fact, greater clarity in policy and regulations will result in fast tracking the development of the huge untapped hydro potential in the neighbouring countries. India has also taken the lead in promoting cross-border trade through Indian power exchanges.

However, a lot remains to be done for the development of cross-border HEPs. Discussing the key issues in cross-border trade of electricity Samdrup K. Thinley, chief executive officer, Bhutan Electricity Authority, says, “There is a need to develop interconnections to support cross-border power exchange. There is also a need to harmonize the grid codes to ensure reliable interconnected operations. In addition, a transparent tariff setting mechanism for the regulated assets-transmission and distribution is required.”

In a bid to address the problems related to transmission constraints in augmenting the cross-border trade of electricity, the Indian government is focusing on developing cross-border transmission links. With regard to power transmission links with Bhutan, there are two additional 400 kV links (Punatsangchhu HEP-Alipurduar and Jigmeling-Alipurduar) apart from the three existing interconnections, which are expected to be operationalised during the Thirteenth Plan period. Meanwhile, for cross-border power transmission with Nepal, the 132 kV links (the Raxaul-Parwanipur and Kataiya-Kushaha lines) and the upgradation of the 400 kV double circuit Dhalkebar-Muzaffarpur line will prove beneficial. The 400 kV Muzaffarpur (India)-Dhalkebar (Nepal) line is expected to be operationalised at its rated voltage by December 2017, which will further enhance the power transfer capacity between the two countries.

Net, net, a number of initiatives are being undertaken by the government to resolve the issues facing cross-borders transmission and trading of electricity, which is expected to provide a thrust to the development of cross-border HEPs.