Substations are an integral part of power systems as they enable energy transfer from generating stations to the transmission network, the distribution network and the final consumer. Substations also help in the protection of the system by keeping its frequency within the specified limits, ensuring stability, controlling the voltage and undertaking fault analysis. The number and capacity of substations in India have seen a tremendous growth over the past few years.

In recent years, the focus has been more on high voltage levels in order to meet the increasing requirements of the transmission network. These include carrying bulk power over longer distances, optimising right of way, minimising losses and improving grid reliability. To this end, in 2015, the first ±800 kV HVDC (high voltage direct current) substation was installed in India. During the Twelfth Five Year Plan, the substation capacity at the 220 kV and higher voltage levels has increased by more than 75 per cent so far.

As per the Central Electricity Authority (CEA), the capacity of substations at the 220 kV and above voltage levels stood at 720,494 MVA as of February 2017. Of this, about 76,500 MVA was added during 2016-17 (between April 2016 and February 2017), an over achievement of almost 70 per cent against the targeted capacity addition of 45,188 MVA for the year. The capacity addition has been largely driven by the need for system strengthening and connecting new generating plants to the grid. Of the total installed capacity, 60 per cent is owned by the state sector and 37 per cent by the central sector. With respect to voltage, the maximum capacity operates at the 220 kV level (42.8 per cent), followed by 400 kV (32.5 per cent). The growth in the substation capacity is expected to continue in the coming years. As per the CEA’s Draft National Electricity Plan, 292,000 MVA of substation capacity at the 220 kV and above voltage levels is expected to be added between 2017 and 2022.

Meanwhile, at the 33 kV and below voltage levels, the substation capacity is estimated at more than 600,000 MVA across four million operational substations as of March 2016. The substation capacity addition in the distribution segment has been primarily due to the increase in the number of consumers and the corresponding demand. The government is also supporting substation capacity addition in the distribution segment through various initiatives such as the Integrated Power Development Scheme (IPDS) in urban areas and the Deendayal Upadhyay Gram Jyoti Yojana (DDUGJY) in rural areas. These schemes envisage the installation of new substations as well as the augmentation of some existing ones. Almost 30 per cent of the planned outlay under the IPDS is earmarked for substation development. Under the DDUGJY, around 10 per cent of the planned outlay is allocated for substations.

In order to address the issues of land availability, safety and communication, various improved technologies are being used for the design and construction of reliable substations. Due to the scarcity of land, particularly in densely populated urban areas and hilly areas, there is an urgent need to reduce the land requirements for setting up distribution and transmission systems. To this end, the use of gas-insulated substations (GIS) has gained popularity. GIS technology requires about 30-80 per cent less land and promises higher safety as compared to the conventional air insulated substations (AIS). However, these stations entail higher capital cost too. To address this issue, a number of utilities are installing hybrid substations, which use both GIS and AIS technologies. They can be customised as per the requirements of the utilities. 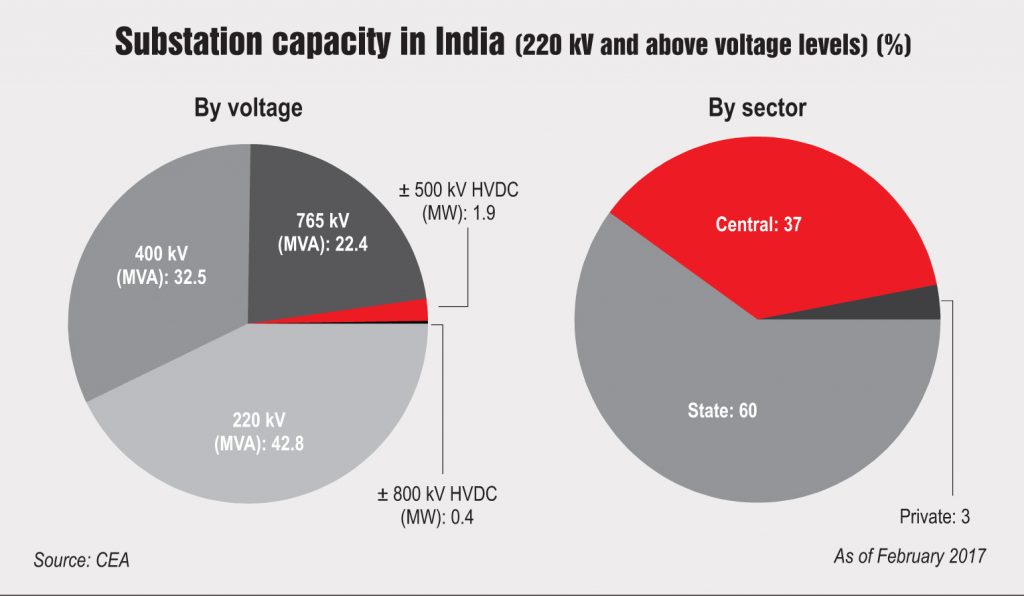 Apart from technology, the space requirements can be reduced by opting for different designs. One such solution is underground substations. These are installed underground but serve all the normal functionalities, and mostly use GIS technology.

The fast restoration of power supply in case of any fault is one of the primary objectives of the transmission and distribution utilities, particularly in places that provide critical services such as hospitals, communication networks and defence establishments. With respect to the transmission network, the grid standards notified by the CEA stipulate that every transmission licensee must have emergency restoration systems at the 220 kV and above voltage levels. In this context, vehicle-mounted mobile substations (comprising trailers, incoming and outgoing HV and LV hybrid switchgears, power transformers and associated connectors) can be used as a substitute of the existing substation. This will help resume power supply in a short time and prevent the consumer’s operations from getting affected due to power cuts.

Utilities are also using controlled switching devices for controlling voltage switching in order to minimise switching transients and inrush currents. They also help in reducing the stress generated in the switching process, thereby increasing the life of the substation and network equipment and enhancing the system security.

Over the past few years, there has been an increased focus on the automation of substations. This allows continuous monitoring and control of various substation components from a remote location. Besides giving information about operations, automation and digitalisation of substations help the utilities enhance predictive maintenance and planning. It also ensures reduced asset downtime, faster restoration of faults and effective asset management.

Some of the key components of digital substations are intelligent electronic devices, the supervisory control and data acquisition system, bay controller units, communication interface and phasor measurement units. The key factors that need to be considered while selecting an automation system for substations are adaptability, interoperability and flexibility. Currently, all new substations are being provided with some level of automation.

One of the key issues facing the substation segment is land scarcity. While it is being addressed through technology development, there is also a need for utilities to coordinate with various urban planning agencies, developers and special economic zones regarding the provision of land for substations in order to meet their long-term requirements.

Any event causing a disturbance in the operation of the substation impacts the overall performance of the system. Real-time measurements and monitoring are essential to reduce such occurrences. While several technologies have been introduced, challenges pertaining to high investment requirements, regulatory approvals and limited know-how of the utility officials continue to hinder their deployment in substations. The high costs involved are a cause for concern, especially for the financially stressed public discoms.

The capacity of substations has increased significantly in the recent past and is expected to grow further in the years to come. In addition, there will be greater focus on the modernisation and automation of substations given the wide number of available technologies and the ongoing push towards smart grid development. Moreover, utilities need to pay greater attention to research and development in order to bring down costs. Various government initiatives are also likely to play an important role in the development of the substation segment.