Taking cognisance of the need to augment hydropower generation in the country, the government is undertaking a host of reform measures to revive the sector. In the recent amendments to the Tariff Policy, 2006, issued in January 2016, it has exempted HEPs from tariff-based competitive bidding till 2022. Earlier, this exemption was valid until December 2015, but now HEPs will continue to follow the cost-plus approach for tariff determination. Meanwhile, in order to expedite the implementation of under-construction HEPs, the Prime Minister’s Office has asked NITI Aayog to prepare a report on stalled hydropower projects. Concurrently, the Ministry of Power (MoP) has set up a committee to suggest ways to expedite the completion of HEPs. Besides, the government is mulling over putting on offer HEPs for development with all approvals and land use rights in place, based on a model similar to that of ultra mega power projects for thermal power plants.

Further, over the years, hydropower generation performance in terms of MUs per MW has witnessed a cyclical performance with no clear trend (see Figure). Overall, between 2005-06 and 2014-15, the ratio recorded an improvement from 2.8 to 3.1. In the first 11 months of 2015-16 (April 2015 to February 2016), the MUs per MW stood at 2.68, as against 2.95 during the corresponding period of the previous year. The operational performance of the HEPs has been adversely affected by physical damage to plant infrastructure, leading to water leakage in the tunnels, construction joints and the dam as well as by partial underflow of the soil. In order to maintain proper operation of the HEPs, it is essential to undertake plant renovation and modernisation in a timely manner.

As per the Central Electricity Authority (CEA), about 12,407 MW of hydro capacity across 44 projects is scheduled for commissioning between 2016-17 and 2021-22. Some of the big-ticket hydro projects lined up for commissioning between 2016-17 and 2021-22 are NHPC’s 2,000 MW Subansiri Lower in Andhra Pradesh, NHPC’s 1,200 MW Teesta Stage III in Sikkim, THDC India’s 1,000 MW Tehri pumped storage plant in Uttarakhand, and NHPC’s 800 MW Parbati Stage II in Himachal Pradesh. 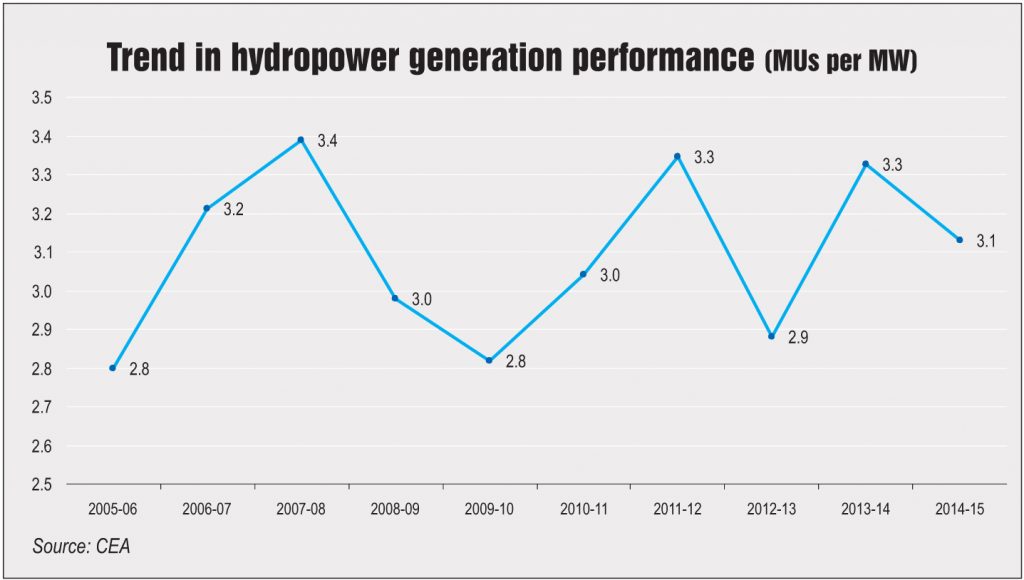 A major deterrent to capacity addition in the hydropower sector is the environmental impact of HEPs. Following the floods in Uttarakhand in June 2013, the Supreme Court had imposed a ban on the implementation of HEPs in the state. The matter is currently subjudice. Meanwhile, the Ministry of Environment, Forest and Climate Change’s expert body  recently recommended a  go-ahead for projects such as the 171 MW Lata Tapovan and the 24 MW Bhyundar Ganga. However, it suggested some design changes for projects such as the 300 MW Alaknanda HEP and the 195 MW Kotlibhel IA HEP. Similar environmental issues came to the fore in the north-eastern region, where previously sanctioned projects now appear to have an adverse impact on the downstream states. These include the 300 MW Panan HEP and the 500 MW Teesta VI HEP.

Another significant challenge faced by developers in the implementation of HEPs is time and cost overruns. This is owing to several reasons, including difficulties in resettlement and rehabilitation, delays in obtaining clearances, geological surprises, opposition from the local population, hurdles in land acquisition, contractual disputes and manpower shortages. As a result, HEPs, which were considered to have the lowest tariffs, are now witnessing an upward tariff trend. Therefore, hydropower is losing its competitive advantage over projects based on other fuels, making state utilities reluctant to buy power at such high tariffs.

Another bottleneck in the execution of hydro projects is the lack of basic supporting infrastructure such as roads and bridges. Transmission networks are vital for the commercial viability of the proposed HEPs. Specifically, the upcoming HEPs in the north-eastern region have inadequate grid connectivity. In the coming years, more and more HEPs are likely to be located in tougher geographical terrain, which would further increase the cost of building roads and power evacuation infrastructure. 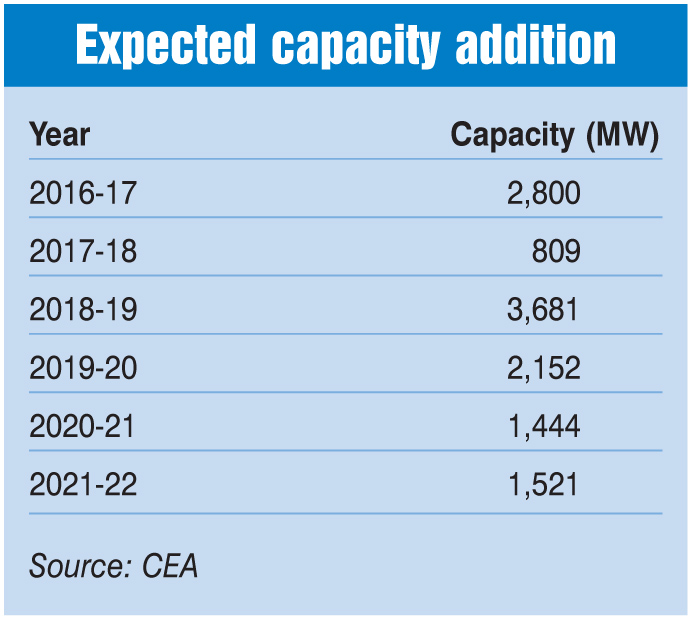 On account of the challenges faced in the implementation of HEPs as well as inadequate policy support, the hydropower sector has witnessed subdued participation from the private sector. The existing rate of return on equity for HEPs is comparable to sectors like renewable energy, making less business sense for developers to invest in projects that are considered high risk. Further, financing activity in the sector has remained slow owing to the uncertainties associated with these projects. From the financers’ perspective, in order to mitigate the risks associated with HEPs, it is essential to create provisions for construction guarantees and performance bonds for the pass-through of liquidated damages, for offstake guarantees, and for the allocation of grid connection risk, among other things.

In sum, the project economics of HEPs is adversely affected by the challenges faced in their execution. Although India is endowed with rich hydropower resources, developers and financiers have been reluctant to invest in this segment owing to the uncertainties associated with it. However, going forward, the host of policy initiatives being taken by the government are expected to improve the outlook for hydro.