The demand for electricity in rural areas is increasing rapidly due to an increase in the customer base, and changes in lifestyle and consumption patterns, which calls for continual strengthening and augmentation of the distribution network. However, the poor financial health of distribution utilities has resulted in under-investment in the distribution network, leading to poor upkeep and maintenance of assets, particularly in rural areas. As a result, strengthening and augmentation of the sub-transmission and distribution infrastructure has become necessary to ensure reliable and quality power supply in rural areas. A key step in this direction is feeder separation between different consumer categories.

Feeder separation has several advantages for a country like India where agricultural metering levels remain low. Separation of feeders for farm and non-farm consumers ensures better load management and increased power supply to rural households and small industries. It helps in flattening the load curve by shifting the agricultural load to off-peak hours, thus facilitating peak load management. For states with low levels of metered sales, feeder segregation allows greater revenue potential for discoms as it helps in reducing the theft and technical losses that prevail in unmetered agricultural consumption.

Feeder separation also helps in reducing the peak power purchase cost through better distribution of agricultural load, leading to savings for discoms. According to a survey conducted by the World Bank in 2014, prior to feeder segregation, more than 80 per cent of consumers in Rajasthan and Gujarat complained of low voltage problems; post segregation, this came down to 6 per cent. Given the significant increase in the rural labour force involved in non-agricultural activities, the increase in electricity supply through feeder segregation has also led to several socio-economic benefits, including job creation and improvement in the quality of life.

A total amount of Rs 430.33 billion, along with budgetary support of Rs 334.53 billion from the central government, has been approved under the scheme for feeder separation and strengthening of the sub-transmission and distribution infrastructure in rural areas. As of April 2016, Rs 158.44 billion has been released under the scheme to 17 states for feeder separation.

Over the years, feeder separation has played a key role in augmenting electricity penetration in the state. Under this scheme, a parallel rural distribution network was laid to cover the entire state, which separated agricultural consumers from non-agriculture ones to facilitate load management and regulate agricultural consumption without affecting power supply to other consumers. It also helped in DSM through various measures such as switching to agriculture feeders, proper grouping of feeders, reducing the gap between maximum and minimum demand, facilitating better load forecasting, and encouraging the use of efficient pumps. In June 2014, the Ministry of Power announced its plan to replicate the Jyotigram Yojana in other states with necessary modifications. 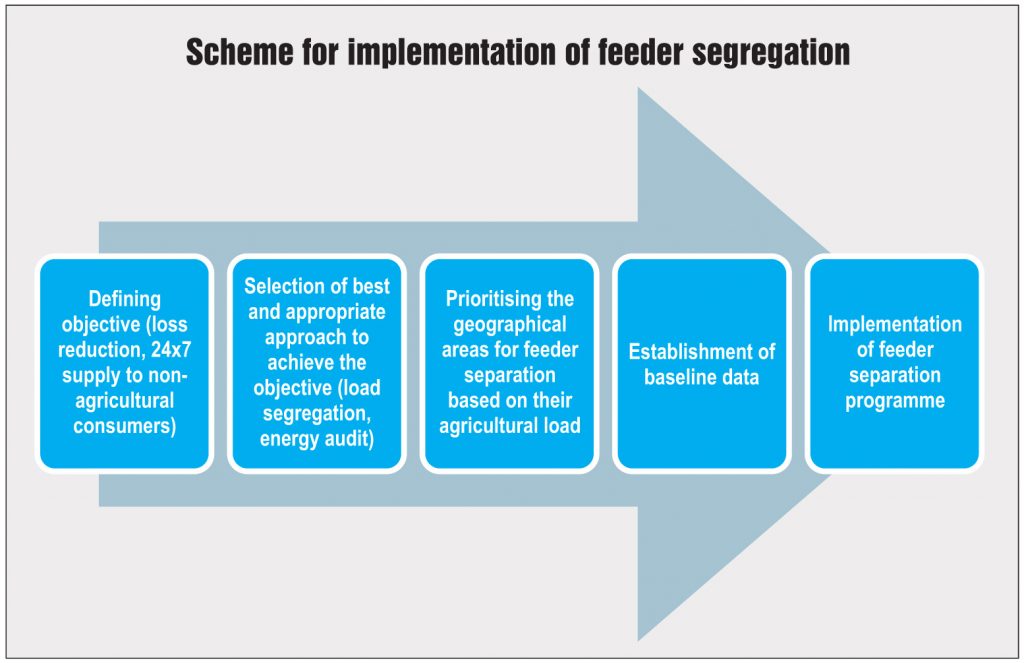 Although feeder separation plays a key role in improving access to electricity, there are various issues that need to be addressed in the policy framework. As per the World Bank report, “Lighting Rural India – experience of rural load segregation schemes in states”, state utilities are under-utilising the potential benefits of data available from segregated feeders, which leads to inefficient targeting of power subsidies. Further, utilities find it difficult to estimate the agricultural consumption correctly. Another issue associated with the policy is that a standard rural load segregation approach for all states may not work as states differ from each other in terms of their objectives, geographical conditions, power infrastructure, consumer mix, AT&C losses, rural development models, etc. Hence, a one-size-fits-all approach is not feasible for feeder separation.

There are also various challenges in the implementation of feeder separation. There is no agreed framework for computing the cost-benefit analysis of the feeder segregation programme of any state. While cost estimates are largely known, the benefits to utilities in terms of revenue augmentation and cost reduction of peak power purchase have not been undertaken. Other implementation challenges include difficulty in maintaining feeder segregation in the medium and long run, detecting unauthorised loads during the peak agriculture season and augmenting investments in metering software and data processing.

According to the findings of a study conducted by a sub-group of the Forum of regulators in 2014, a national-level programme for feeder segregation should be implemented in a graded and calibrated manner while allowing states to have flexibility to adapt the design of the project consistent with their respective needs and priorities. As per the roadmap, it distinguishes between inputs for pure agricultural feeders and non-agriculture feeders. For pure agricultural feeders, the sub-group recommends the use of an LT high voltage distribution system (HVDS) as an input as it entails lower costs as compared to a 100 per cent HVDS constituting an independent DT for each agricultural consumer. It controls the unauthorised running of motors and also reduces technical losses, resulting in a reduction in AT&C losses on agricultural feeders. With respect to non-agricultural feeders, it is essential to tackle the high AT&C losses, which are in the range of 40 per cent to 70 per cent. The sub-group suggests that one of the cheapest methods is to shift meters outside the consumer premises inside pillar boxes, re-lay the LT distribution system and ensure 100 per cent metering of all non-agricultural consumers.

Feeder segregation has helped improve rural electrification by ensuring quality and reliable power supply. The government’s thrust on feeder segregation through the DDUGJY has also increased with higher investments and increasing participation by states. However, steps have to be taken to further improve feeder segregation. In order to enable better targeting of subsidies through feeder data, automated metering of agricultural consumers is essential to obtain consumer-specific consumption information and subsequently ensure better subsidy delivery. The use of IT-enabled rural power systems will also help in the collection and analysis of electricity input and consumption data, improve load management, and thus, reduce losses. Each state should adopt a bottom-up approach in deciding its framework for feeder separation within the overall broad guideline decided by the central government. Proper implementation of these measures will further improve the results of feeder separation and strengthen the rural electricity infrastructure.