Coal-based power should not be marginalised, believes Ravi Uppal, managing director and group chief executive officer, Jindal Steel and Power Limited (JSPL). In a recent interview with Power Line, he spoke in detail about the key issues that impact the thermal power industry and his outlook for the sector. Excerpts…

The power generation capacity in India is about 320,000 MW, of which 220,000 is thermal (coal and gas). With gas-based capacity amounting to about 25,000 MW, the thermal capacity largely comes from coal. Further, a large part of the gas-based capacity is lying paralysed due to a shortage of gas and the unaffordable rates of imported gas. Over 50,000 MW capacity is based on renewable energy sources (mainly wind and solar). When it comes to renewables, the capacity is growing quite rapidly with almost 5,000 MW-6,000 MW being added every year. However, the plant load factors (PLFs) of these sources of generation are relatively low, around 25 per cent.

Hydropower is also underutilised in the country, with about 44,000 MW of installed capacity against a total potential of about 200,000 MW. Hydropower must be harnessed more, as it is not only a cleaner and cheaper form of energy, but is also complementary to both thermal (for stable generation) and renewable sources of generation (for meeting peak loads). Since hydropower can be switched on and off in a very short time, it can be highly effective in meeting undulations in power demand. So, hydro has significant importance, which is why the government’s recent push for amendments to the hydro policy is absolutely well placed and also long overdue. The cabinet is yet to approve these draft amendments.

These days, it is being said that we are surplus in power. However, a large part of the population still does not have access to electricity. Our per capita electricity consumption is only about 1,050 units, which is much lower than that of the global average of 3,500 units. Hence, to say that we are power surplus or that we have sufficient power is incorrect. To increase the per capita consumption, power should be made available and delivered in every part of the country, and it should be made affordable.

On the transmission front, the government has taken certain good measures, including the installation of a number of high voltage direct current (HVDC) lines for bulk movement of power. With the interconnection of the regional grids, the transfer of power from power surplus to deficit parts of the country has been facilitated.

Electricity can be made more affordable by reducing the aggregate technical and commercial (AT&C) losses, which are 20-21 per cent, whereas in some developed countries, including South Korea and Japan, losses are only 3-5 per cent. Power can be cheaper if we are able to bridge this difference of 15 per cent. At present, the tariffs are very high with industrial and commercial consumers paying between Rs 7 and Rs 10 per unit. At the same time, agricultural consumers are given free power. While it is all right to provide subsidised power to a segment in order to support it, supplying power that is completely free is something we should refrain from doing. Having said that, there is a lot of headroom to grow power capacity in India so as to reach out to each consumer and increase the per capita consumption. There is a need for a more pragmatic approach, with greater focus on the fuels that we have in our country.

What is your view on the government’s projections that India will not need new coal-based capacity addition to meet its power demand by 2027?

I do not agree with the view that we do not need more coal-based power for the next 10 years. When we say that we do not need thermal power, it is basically assumed that we are not likely to have enough demand. In 2016-17, 88 per cent of the power generated came from thermal. Further, the average PLF for renewables is 25 per cent, and for thermal it can easily be 100 per cent. In other words, 40,000 MW of renewable power is actually equivalent to 10,000 MW of thermal capacity. So, to say that “x” MW of thermal capacity is not required due to “x” MW of renewable capacity is misleading. We should make sure that we do not completely marginalise coal-based generation, which is the most stable and reliable form of generation, and the only controllable power that we have. Most importantly, it provides power generation at a stable and good frequency, which is essential to support high load operations such as industries.

What are the biggest challenges for thermal power producers? What has been the impact of the new environmental norms on the industry?

One of the biggest challenges currently is the lack of demand. Further, there is no perfect market for power trading. For government-owned generation companies like NTPC and NLC India, there is an assured market for power. They sign power purchase agreements (PPAs) even before they set up a power plant, whereas private producers like us do not generally have definitive customers and have to worry about where to sell power. Even today, we are using less than 50 per cent of our 3,400 MW capacity because we are not able to market the whole capacity. Hence, there is no perfect market trading, with much of the capacity already booked by the government utilities. So, there is very little room for private companies to participate in power trading.

As per the new norms, technologies such as flue gas desulphurisation (FGD) for nitrogen oxide (NOx) control are required, which means an additional investment. So, they are reducing the margins further for developers, especially when there are no new PPAs for them. Plants that are very old, have outlived their economic life, are not fuel efficient and do not meet emission or water norms must be phased out. There is no point in upgrading and keeping these assets. However, it should be ensured that the new capacity being added is based on supercritical and ultra-supercritical units, equipped with new technologies for sulphur oxide (SOx) and NOx control such as FGD, which make sure that the impact on the environment is minimal. There is no looking away from that.

How has been the operational performance of the company’s plants over the past year?

Our plants are super-efficient and are among the best power plants in the country. When we have the load, we run our plants at 103 per cent, and never at below 100 per cent. But a matter of anxiety for us is the lack of demand and PPAs. At present, we are pumping a lot of power into the national exchange, which is not a very happy thing to do, as we are selling power on a day-to-day basis. Since there are no PPAs, everybody is rushing to sell power through the exchange, which is the only channel to sell it, and hence, the prices are very low. If there is demand, we have the capacity to meet it. Overall, we are pleased with the way our people are operating our power units. We have won a lot of national and international awards with the way we are maintaining our plants in terms of availability. 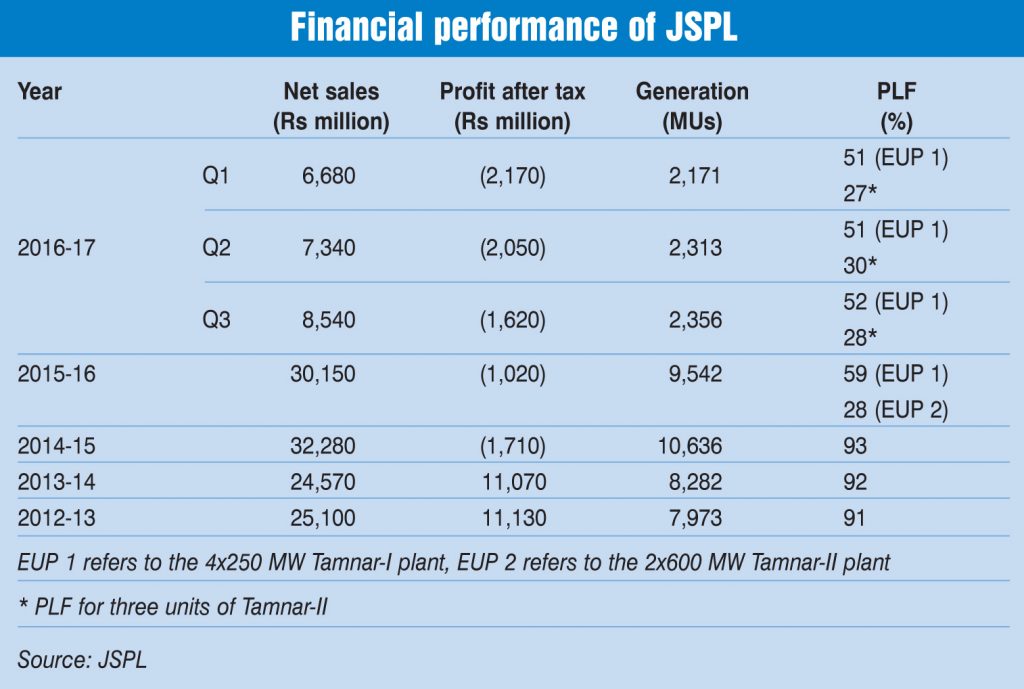 What is JSPL’s long-term strategy for the independent power producer segment?

The primary and undivided focus of our company is to use the capacity that we already have. We will also have a continued focus on operational excellence because that helps us to control the cost of the power we produce. We also plan to change gears in terms of whom we sell the power to. We will not only sell power to utilities through PPAs, but also to other consumers in the market through bilateral agreements and other available mechanisms. We are keen to enter the renewables space, but we are waiting for an opportune moment. Renewable energy technologies are undergoing a major transition and the cost of generation and the capital cost of setting up plants are coming down dramatically. The rate of change is too rapid; when it slows down a bit, we shall take a step forward. We already have a large land bank for solar and are just waiting for the technology to stabilise. We would also be happy to get into power distribution. We already have the distribution licence for the Punjipathra industrial estate, where we are selling close to 150 MW of power. We would like to enhance our electricity distribution capacity.

What is your outlook for the power sector for the next two to three years?

The power sector in India has a long way to go. We should not believe we have excess installed capacity. It only appears surplus because of low demand and no access to electricity for a number of consumers. By 2030, the installed capacity should more than double from the current 320,000 MW. The private sector will have a huge role to play, especially in the distribution segment. The government needs to reduce its role in the power sector and allow a buyers’ market to exist. A clear roadmap needs to be developed, defining what needs to be done.