In order to meet the new standards by the stipulated deadline, new emission control systems need to be installed and retrofitted at power plants. One of the widely adopted technologies for emission reduction across the world is flue gas desulphurisation (FGD). The government has identified this as one of the technologies to be installed in power plants across the country to cut down emissions.

The Central Electricity Authority (CEA), along with regional power committees, has prepared region-wise implementation plans to install FGD systems in about 122 GW of coal-based capacity. The countrywide installation is planned to be completed by December 2023. The CEA has also identified 72 GW of capacity at plants that do not have space to install FGD systems and hence could be phased out.

Power Line takes a look at these implementation plans…

The Ministry of Power (MoP) constituted a committee under the chairmanship of the CEA chairperson in September 2016 for preparing a phasing plan for implementation of the new environmental norms issued by the MoEFCC. The committee includes members from the CEA, the Ministry of Coal, the MoEFCC, the Central Pollution Control Board, Power System Operation Corporation Limited, NTPC Limited and the Damodar Valley Corporation. One of the key recommendations of the committee is the installation of FGD in coal-based plants. Since FGD helps in reducing SPM emissions significantly along with SOx emissions, it has been given preference over other measures in plants that have space for installing these systems. This will avoid unnecessary expenditure on other measures to reduce SPM emissions for most of the units.

Following the recommendations of the committee, the CEA identified the capacity that has space for FGD installations. Based on deliberations with plant owners and other stakeholders, the respective regional power committees have prepared phasing plans for FGD implementation for the four (northern, southern, western and eastern) regions. Later, in March 2017, it was decided to phase out units that do not meet the SOx emission norms and also do not have the space for installing FGD. Against this backdrop, the MoP and the MoEFCC directed the CEA to draw up a phase-out plan for such units. 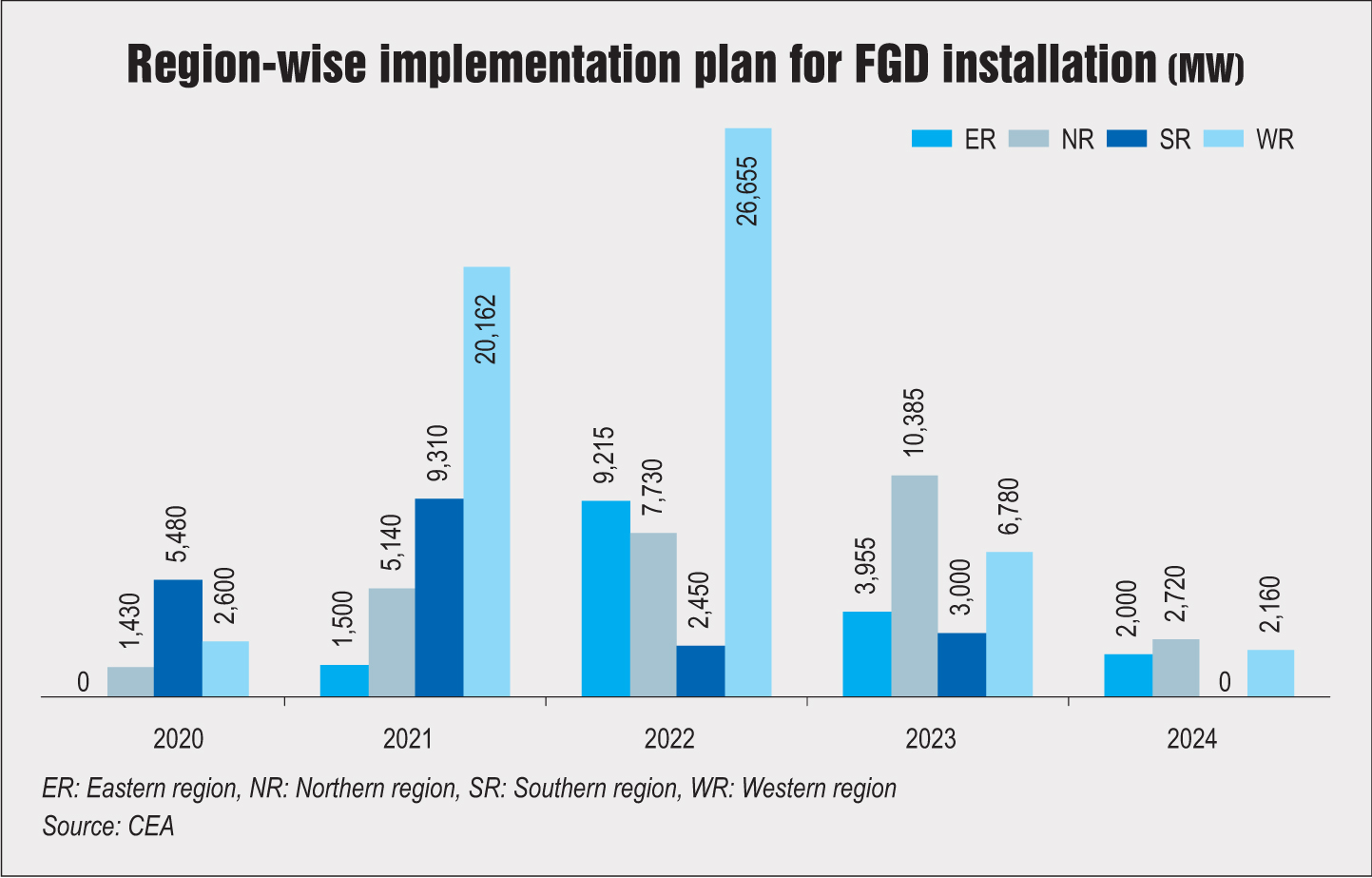 As per the four regional plans, FGD will be installed in 295 units aggregating 122.6 GW of capacity. Units below 25 MW and those recommended by the CEA for retirement or replacement with new supercritical units have not been considered for the phasing plan. The majority of this capacity, about 47 per cent, is located in the western region, followed by the northern region with 22 per cent of capacity. About 85 per cent of this capacity is less than 10 years old, making it even more prudent to install FGD in these units.

It is estimated that pre-installation activities would take about three years’ time and therefore, the phasing plans for the installation of FGD have been prepared starting January 2020. As per the plans, all the identified units will have FGD installed by 2024. It was also deliberated that a shutdown of about six weeks would be required for the installation of FGD. While the tentative shutdown periods have been identified based on the anticipated demand-supply scenario of each state and region, the time for actual shutdown may vary depending on the grid conditions prevailing at the time.

As per the CEA, the cost of installation of wet limestone-based FGD is estimated to be around Rs 5 million per MW. The tariff implication of FGD, considering an operational life of 15 years, auxiliary power consumption of 1.5 per cent and plant load factor of 62 per cent, is likely to be around Re 0.32 per kWh. However, it is being argued that the cost implications could be higher, considering the loss on account of the shutdown and raw material costs. 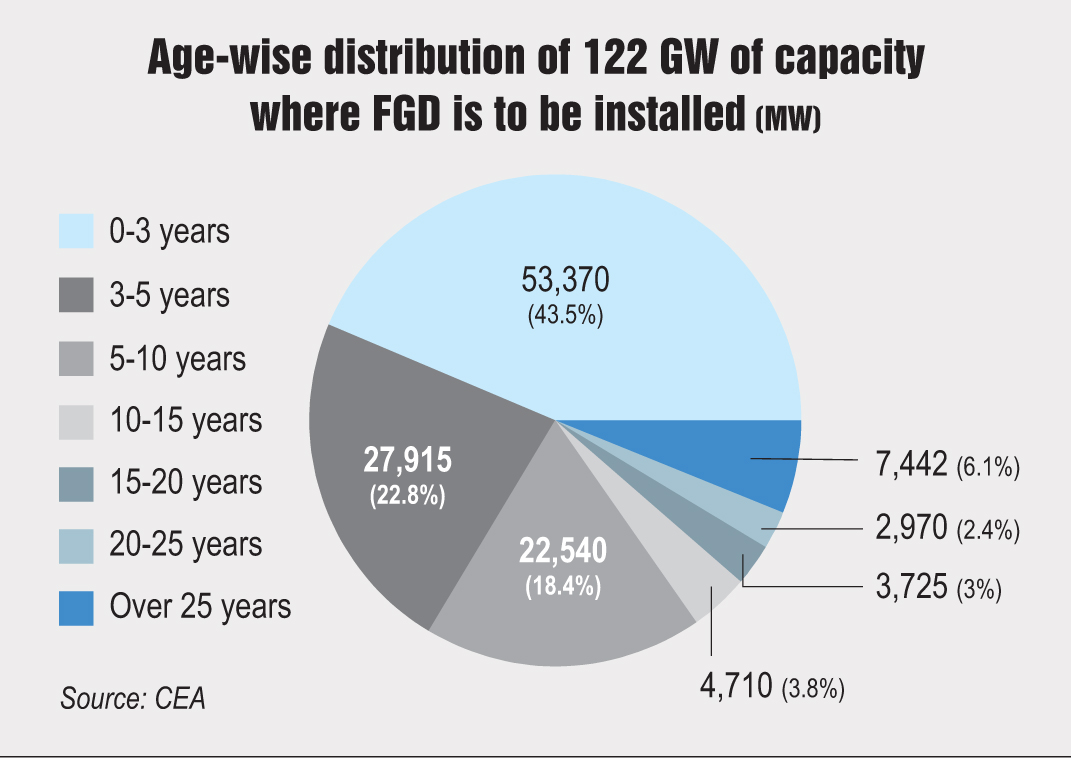 Challenges in meeting the norms

The biggest challenges for the implementation of the new norms are lack of space and insufficient time. A number of units do not have space available to install FGD, in which case it is very difficult for such units to comply with the emission norms. In the case of units that have space available, approximately three years are required for the pre-implementation work. Considering this, two years, time (from the issue of the norms in December 2015 to the stipulated deadline of December 2017) is highly insufficient even if the plants had initiated the implementation in December 2015 itself.

Another major constraint is the lack of clarity on the recovery of expenditure incurred on the installation of the new systems. Whether the additional cost of FGD installation would be passed through in the tariff or whether the government would directly fund the process is not yet clear. In a recent order in the matter of a petition (by Maithon Power Limited) seeking approval of capital expenditure for compliance with the amended emission rules, the Central Electricity Regulatory Commission (CERC) disposed of the petition on the grounds that the Tariff Regulations, 2014 do not provide for such approvals.

The installation of FGD will result in an increase in water consumption. This, in turn, necessitates a revision in the norms for specific water consumption by plants. Meanwhile, the avenues for disposal of gypsum and sources of high quality limestone also need to be looked into. 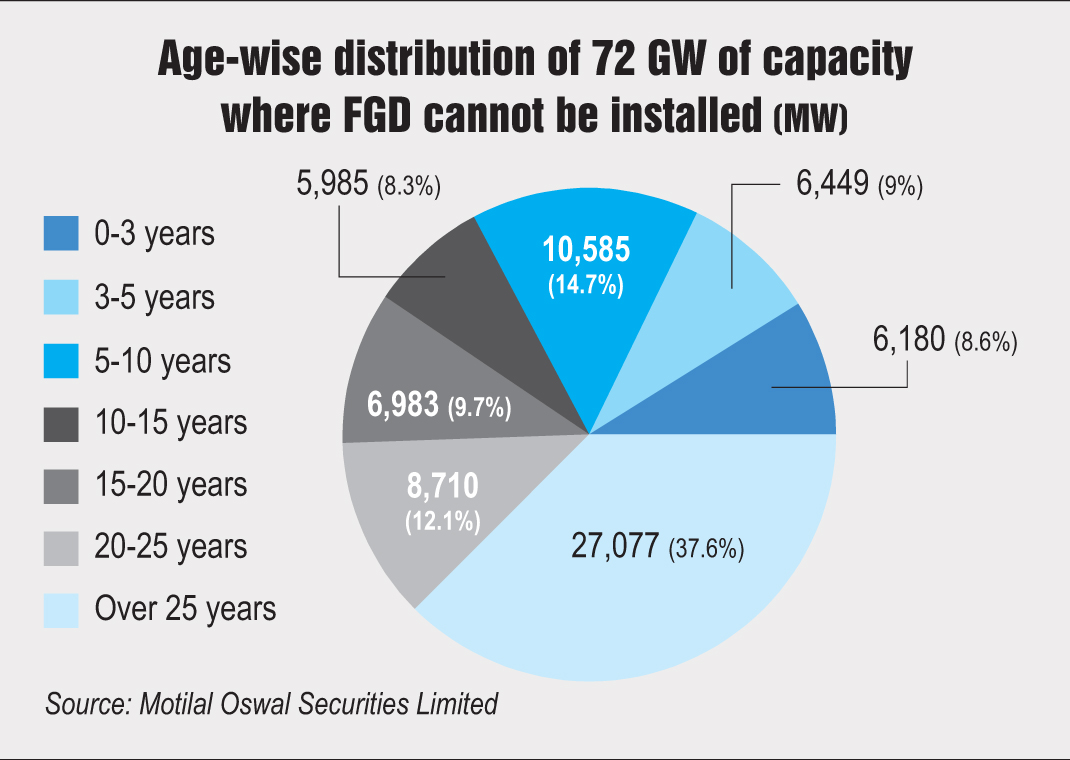 Phasing out of 72 GW

The CEA has identified about 72 GW of thermal capacity that is not in a position to install FGD due to the non-availability of space and hence will not be able to comply with the new SOx emission norms. It would not be prudent to incur additional expenditure for meeting the norms partially for SPM and NOx and thus could be phased out.

As directed by the ministries, the CEA, along with the generators and load despatch centres, is working on a phase-out plan for the aforesaid capacity, considering technical issues like load generation balance, grid security, transmission constraints and local problems like radial loads. The southern regional power committee has already prepared and communicated the phase-out plan. The eastern regional power committee, after detailed deliberations with stakeholders, directed the power plants to submit their phasing-out plan directly to the CEA. Generating companies in the western and northern regions have also submitted their views and plans regarding the phasing-out of non-compliant plants.

As per the analysis of Mumbai-based Motilal Oswal Securities Limited, the shutting down of some capacity is not likely to disturb the grid much. However, closing as much as 72 GW (over 30 per cent of the installed thermal capacity) can significantly lower the thermal capacity-to-peak demand ratio.

Also, half of this capacity is less than 20 years old and has not recovered its investments. Some plants have, in fact, been commissioned in the past three years – for instance, Rihand power plant of NTPC and Chhabra power plant of Rajasthan Vidyut Utpadan Nigam Limited. Further, some plants, such as NTPC’s Korba and NTPC’s Vindhyachal, are very crucial and could pose serious grid operation challenges if phased out. Meanwhile, capacities that are more than 25 years old (38 per cent), including Titagarh (CESC Limited) and  Patratu power plant (owned by Patratu Vidyut Utpadan Nigam Limited, a joint venture of NTPC Limited and Jharkhand Bijli Vitran Nigam limited), could easily be taken out of the system.

With the closure of more than 25-year-old plants, the electricity market, which currently has excess supply due to low demand for power, could balance sooner than expected. This would help independent power plants and lead to demand for long-term power purchase agreements. It could also boost investments in the transmission segment due to the realignment and construction of new lines to connect the load centres to the new supply points. 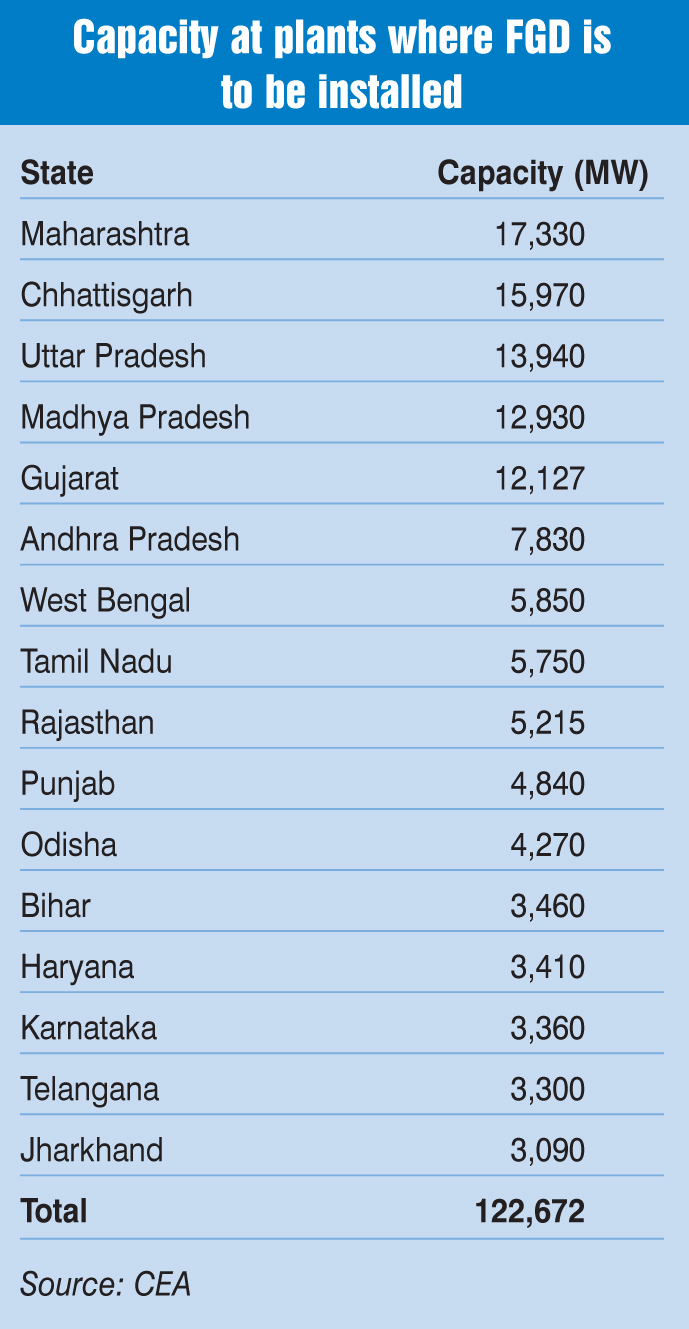 A detailed study of the post phase-out scenario is essential to examine grid operation issues and power system dynamics at the all-India level. The central and state transmission utilities would need to strengthen their networks. Also, the capacity under planning would have to be completed sooner in order to maintain energy security.

Meanwhile, developers are reassessing the feasibility of installing FGD or alternative technologies such that the plants comply with the norms and are not required to shut down. For instance, NTPC has stated that its Simhadri power plant, included in the list of non-compliant plants, has space to install FGD and should be removed from the list. Similarly, more such plants could be removed from the list of non-compliant plants in the coming months.

With only six months left to the December 2017 deadline, adherence to the norms seems nearly impossible. The ministry has so far neither extended the deadline nor announced any penalties for non-compliance. In fact, it has repeatedly indicated its intent to not do so. In April this year, in a written response to a question in the Rajya Sabha, the late Anil Madhav Dave, who was then minister of state for environment, forest and climate change, clarified that there was no proposal under consideration to dilute the notification regarding emission standards for thermal power plants.

However, the formulation of the implementation plan by the CEA, which clearly states that FGD would be installed between 2020 and 2024, has in a way given more time to power plants to comply with the standards. This is also likely to push the government to formally extend the timeline.

Meanwhile, power plant developers are also exploring the possibilities of partial and combined FGD. With respect to regulatory support, the CEA is already working with the CERC and the latter is expected to come out with a methodology for the same soon.

Overall, the notification of new norms and the preparation of an implementation plan for the same are seemingly the right steps in the direction of reducing emissions from thermal power plants. However, there is still a long way to go as is evident from the implementation plan.

Digitising Energy: Imperative for a robust and reliable power system

The Indian power sector has been struggling with issues such as infrastructure inadequacy, and transmission and distribution inefficiencies. There are several technical challenges in terms of manual distribution processes and lack of real-time information that […]

Towards Viability: Stakeholder views on CERC paper on storage systems

With the increasing share of renewable energy in total generation arises the need to optimise generation and maintain grid reliability. One of the solutions for addressing the challenges of large-scale renewable integration and enabling enhanced […]