Power Line takes a look at the current state of the renewable energy sector in Telangana, the policy and regulatory initiatives as well as future plans…

The state is actively promoting the renewable energy sector through various policy and regulatory measures. It already has in place the Telangana Solar Policy, 2015, which offers a slew of incentives. It provides for a 100 per cent refund of value added tax (VAT)/goods and services tax for all inputs required in solar power projects. Besides, there is provision for 100 per cent refund of stamp duty on the land purchased for a solar power project. These benefits are applicable to grid-connected solar power projects based on both photovoltaic (PV) as well as solar thermal technologies set up for the sale of power to state discoms or to third parties within the state and for captive generation. There is an exemption of cross-subsidy charges for power sale within the state. Banking of 100 per cent energy is permitted for sale within the state.

The Telangana State Electricity Regulatory Commission released the Net Metering Rooftop Solar PV Grid Interactive Systems Regulations in November 2016. According to the policy, the state will have a three-phase service wherein single-phase consumers will be eligible for net metering for up to 5 kW of capacity. Further, the capacity of a rooftop solar PV system to be installed on the premises of an eligible consumer should not be less than 1 kWp and not more than 1 MWp. In addition, the tariff payable to an eligible consumer under the net metering arrangement will be the average power purchase cost of a discom.

The state also released the draft wind power policy in 2016. According to the draft, the policy proposes ease-of-doing-business provisions similar to those offered under the solar policy. These include facilitation of approvals through a single-window clearance system, deemed conversion of land to non-agricultural land status, exemption from the Land Ceiling Act, exemption from wheeling and transmission charges for captive/group captive use within the state, refund of VAT and stamp duty and electricity duty exemption. The draft policy also suggests that wind power plants should be given must-run status as per the provisions of the grid code, and banking of 100 per cent of energy must be permitted for all captive and open access/scheduled consumers. Further, for projects located in the state and selling power to third parties within the state, 100 per cent exemption should be provided on the cross-subsidy surcharge.

According to the Ministry of New and Renewable Energy, Telangana’s cumulative installed solar capacity stood at 1,287 MW as of March 2017,  of which around 759 MW was added during 2016-17. The state has plans to increase the installed solar capacity significantly in the next few years. To this end, it has signed power purchase agreements for 3,800 MW of solar power projects, all of which are expected to come online by June 2018, thereby helping the state achieve its 5,000 MW renewable energy target by 2019. Solar power developers such as ACME Solar, Sky Power, Adani Green, Suzlon, Mytrah, Gestamp and Shapoorji Pallonji are among the solar power developers engaged in setting up solar power projects in the state.

In addition, a solar park, with a capacity of 500 MW in Phase I, has been sanctioned in Mahabubnagar district, which will be developed by the Telangana New and Renewable Energy Development Corporation at an estimated cost of Rs 2,150 million.

As per National Institute of Wind Energy estimates, Telangana has a strong wind power potential of about 4,244 MW at 100 metres above ground level. However, the state has seen little progress in this segment as compared to the solar segment. Its installed wind power capacity as of March 2017 was around 100 MW, with a capacity addition of only 23 MW reported in 2016-17.

Telangana has sanctioned the setting up of 361 MW of wind projects, which are expected to be commissioned by 2017-18. The state’s draft wind policy suggests a target of 2,000 MW of capacity by 2018-19. It also talks about promoting wind-solar hybrid projects for better utilisation of common infrastructure and related facilities. The feed-in tariff for such projects would be as determined by the state electricity regulatory commission. In addition, as the central agencies look increasingly towards competitive bidding for wind power projects, which have helped bring tariffs down, the offtake of wind energy is likely to improve, leading to greater investments in the segment in states like Telangana. 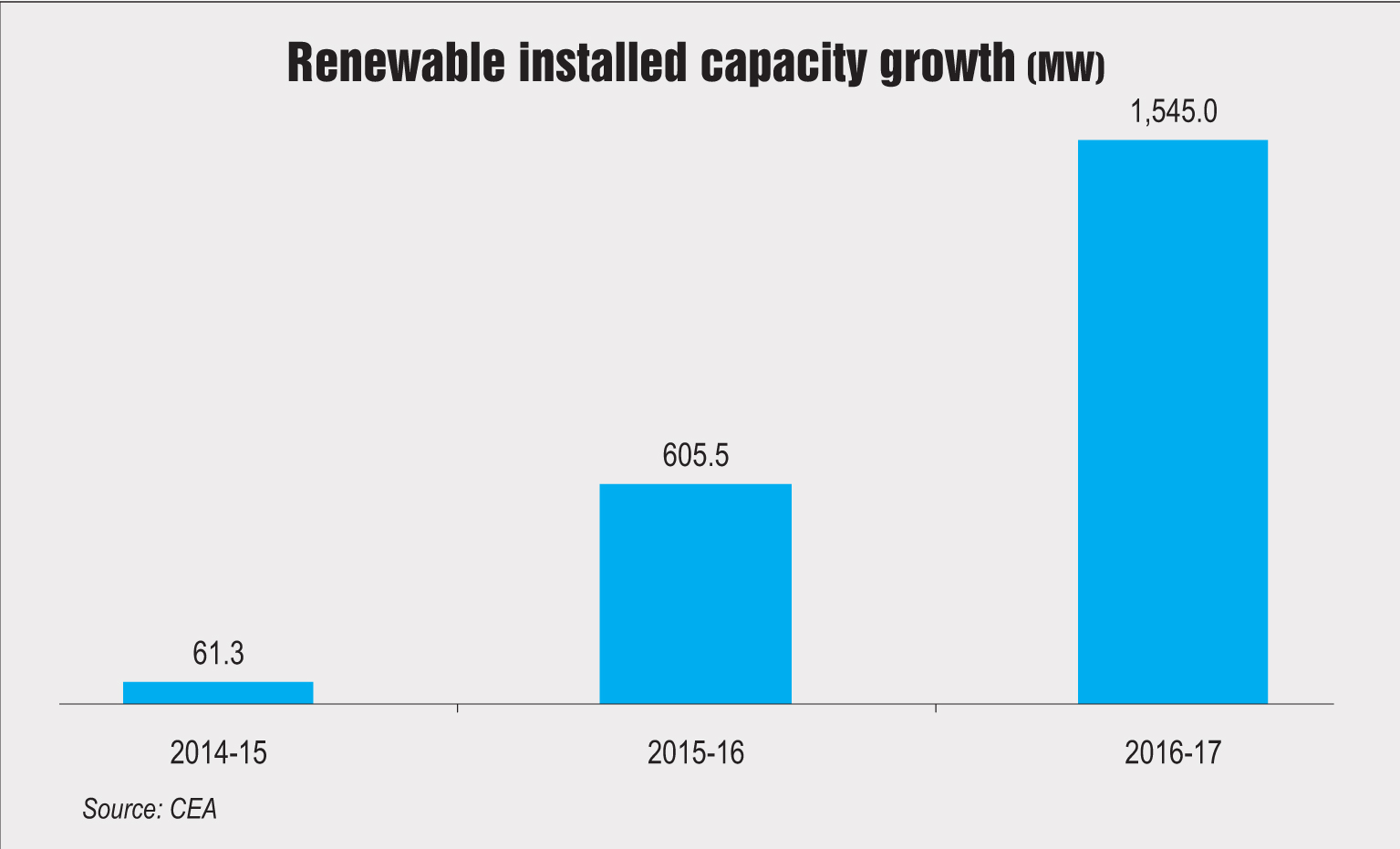 Since Telangana is a relatively new state, it has been facing many challenges in ensuring the availability of the requisite infrastructure for absorbing the upcoming renewable energy capacity. To this end, the state needs to expedite its transmission network growth plans to evacuate the 5,000 MW of targeted renewable energy capacity expected to be commissioned by 2019. The poor financial health of the state’s discoms has also posed a challenge in the off-take of renewable energy. However, with the state’s decision to join the central government’s Ujwal Discom Assurance Yojana, the situation is likely to improve in the near future. The state had a poor renewable purchase obligation (RPO) compliance level at 40.4 per cent in 2015-16. It needs 1,576 MW and 2,363 MW of solar power capacity to fulfil its RPO commitments for 2017-18 and 2018-19 respectively, against the 1,545 MW of capacity installed so far.

Covid-19 has altered the world, but it has not stopped the steady mar­ch of renewable energy. In fact, during the pandemic, the segment grew faster than it has done in the past. […]

At the 15th Annual Solar Power in India conference organised by Re­ne­wable Watch, a developer in the commercial and industrial (C&I) solar segment with experience in both captive and open access projects remarked that their […]