In India, the distribution of natural energy resources is uneven and concentrated in a few pockets. Without interstate as well as inter-regional links, these resources cannot be used optimally. There is also a need for a stable and secure grid. Technologies such as flexible alternating current transmission system (FACTS) and high voltage direct current (HVDC) ensure the stability and security of India’s complex grid system by reducing transmission losses; optimising the power flow; minimising cascading disturbances; preventing blackouts; supporting the integration of intermittent renewable energy resources into the grid; and increasing transmission capacity and system stability.

HVDC technology is being increasingly deployed around the world for bulk power transfer. In India, some of the notable projects with ±800 kV HVDC systems are the Northeast Agra transmission link, the Champa-Kurukshetra link and the Raigarh-Pugalur-Tirichur link. In addition, HVDC technology is contributing to interconnections in the SAARC region. The 500 MW HVDC back-to-back India-Bangladesh interconnector has been operational since 2013.

The key benefits of HVDC systems include controlled power flow, bulk transfer and the absence of unrestricted line length. They also allow for asynchronous operations and stabilise HVAC systems by controlling power swings. HVDC is cheaper than HVAC technology when it comes to long distance and large quantum of power transmission since it requires fewer lines, and therefore less right-of-way (RoW) clearances for the same amount of power transmission.

An HVDC system can be divided into the conventional line commute converter (LCC) HVDC system and voltage source converter (VSC) HVDC system. Conventional HVDC transmission is based on LCC converter technology and uses high power thyristors. Such systems use semiconductors that can withstand voltage in either polarity and can be turned on by control action, but the turn-off and “commutation” rely on the external circuit. LCC HVDC presents several limitations vis-a-vis VSC HVDC as it requires stronger AC systems, filters for lower order harmonics, costly MI cables and 50 per cent reactive compensation. Further, its converter transformers are exposed to direct current.

HVDC transmission based on VSC uses high power insulated-gate bipolar transistors (IGBT). In these systems, active and reactive power is controlled independently. Compared to conventional HVDC, VSC HVDC is able to control AC voltage almost twenty times faster, thus eliminating the need for fast telecommunication between two stations. VSC operates in all quadrants of its capability curve and can be used as a static synchronous compensator (STATCOM). In addition, a standard transformer design can be used to withstand DC voltage or harmonic currents in a symmetrical monopole configuration. The disadvantages of VSC HVDC include low power capability, high station losses, high cost and low reliability. 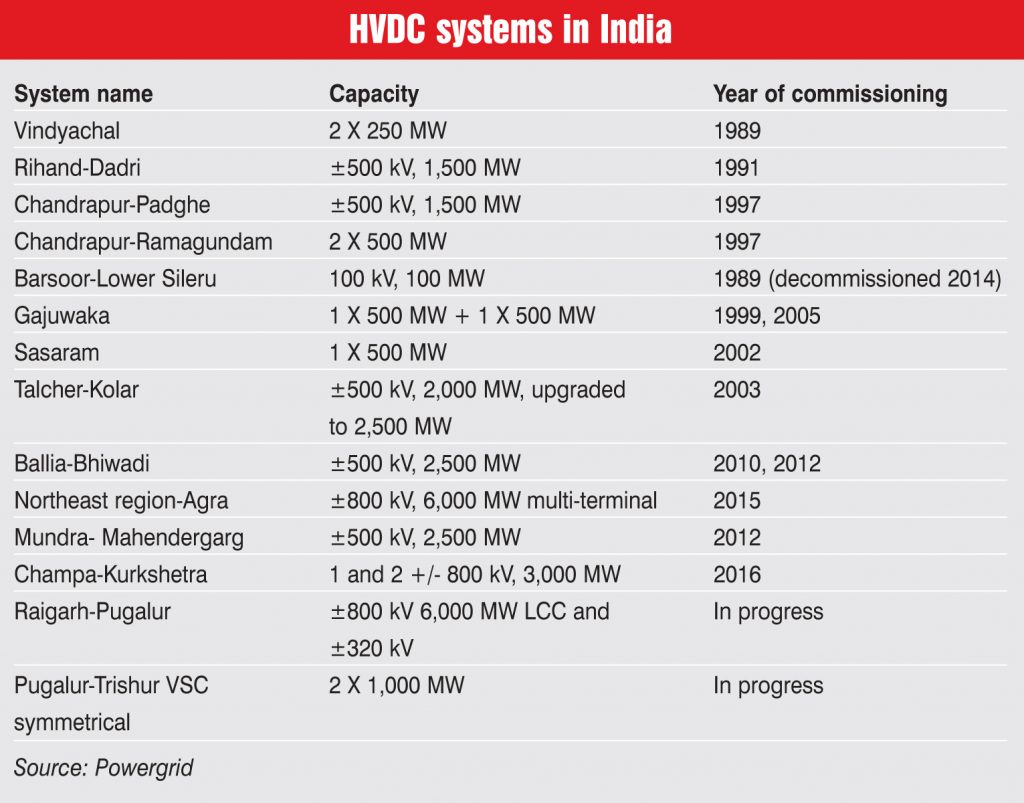 These devices can also be divided into four categories based on how they are connected – series controllers, shunt controllers, series-shunt controllers and series-series controllers. Series FACTS devices boost stability, while shunt FACTS devices provide reactive power compensation. In addition, FACTS devices can be classified into two generations. First-generation devices have been in commercial use since the 1970s and employ conventional thyristor-switched capacitors and reactors with only current turn-on features. They employ capacitor and reactor banks with fast solid-state switches in traditional shunt or series circuit arrangements. First-generation controllers are static VAR compensators (SVCs), thyristor-controlled series capacitors (TCSCs), and thyristor-controlled phase-shifting transformers.

Fixed series capacitors (FSCs) are the simplest source of series compensation. They can increase the transfer capability and reduce the transmission angle. They increase system stability by limiting load dependent voltage drops.

TCSCs have several advantages over FSCs. Their key benefits are that they can be used for load load-flow control and power oscillation damping.

Meanwhile, SSSCs can vary the effective impedance of a transmission line by injecting voltage with an appropriate phase angle in relation to the line current. IPFCs, on the other hand, are ideally a combination of two or more SSSCs that are connected through a common DC link to facilitate the bidirectional flow of real power between the AC terminals of SSSCs.

STATCOMs offer dynamic voltage control, power oscillation damping and system stabilisation, which enhance the capacity and quality of power. These are compact devices that have high response speeds and minimal environmental impact.

A combination of a STATCOM and an SSSC, UPFCs are one of the most versatile FACTS devices. A UPFC device comprises two VSCs coupled through a common DC link. The UPFC is able to simultaneously or independently control the transmission line voltage, impedance and angle. It can control both real and reactive power flows in a transmission line.

Further, SVCs stabilise voltages and control dynamic reactive power. The typical response time of an SVC ranges from 30-40 milliseconds, which is shorter than that of STATCOM.

The biggest challenge that the transmission sector is facing today is RoW, which can be overcome by high intensity transmission corridors. Power Grid Corporation of India Limited has seamlessly upgraded the ± 500 kV Talcher–Kolar HVDC terminal from 2,000 MW to 2,500 MW without changing any equipment. This has been achieved by enhancing the cooling of transformers and smoothing of reactors at negligible costs.

Going forward, FACTS and HVDC will play increasingly important roles in Indian transmission networks as they can increase the efficiency of the transmission system, improve dynamic performance under various contingencies and help prevent grid disintegration.

Technology Landscape: Growing automation and digitalisation across the power sector

The technology landscape in the power sector is evolving at a fast pace driven by the changing energy mix and increasing electricity supply. As renewable capacity continues to grow, technology adoption becomes imperative to maintain […]

The power sector in India has undergone a sea change.  The integration of regional grids into a single natio­nal grid in addition to simultaneously providing near-universal electricity acc­ess has helped the sector achieve surplus power. […]