The transmission segment has grown significantly over the past few years driven by a conducive policy framework, active private sector participation, and concerted efforts by Power Grid Corporation of India Limited (Powergrid). As of May 2017, the country’s transmission infrastructure (at the 220 kV and above voltage level) comprised 371,878 ckt. km of transmission lines and 730,435 MVA of transformation capacity. In addition, the high voltage direct current (HVDC) capacity stood at 19,500 MW.

During the Twelfth Plan period (2011-17), the transmission line length grew at a compound annual growth rate of 7.3 per cent while the transformation capacity grew at 12.5 per cent. The interregional transmission capacity also increased from 27,750 MW to 75,050 MW during the same period. In terms of line length and transformer capacity, the state sector has a dominant share followed by the central sector (predominantly Powergrid) and the private sector.

The transmission sector is moving towards higher voltage levels, with Powergrid commissioning critical ±800 kV HVDC projects in the past two years. These include the 3,506 ckt. km Biswanath Chariali (Assam)-Agra (Uttar Pradesh) bipole line – the country’s first HVDC line to be commissioned in September 2015. In March 2017, Powergrid completed trial operations of the 1,500 MW Pole I of the ±800 kV Champa-Kurukshetra HVDC transmission system and began commercial operations. It also commissioned the 2,576 ckt. km Champa-Kurukshetra HVDC transmission line at a total cost of about Rs 63 billion. The Champa-Kurukshetra HVDC transmission system is part of the ±800 kV, 3,000 MW Western Region-Northern Region HVDC Interconnector Transmission System for independent power producer projects in Chhattisgarh.  It will be further upgraded to 6,000 MW through the addition of a second HVDC bipole of 3,000 MW at an estimated cost of Rs 52 billion. It is expected to be completed by December 2018. 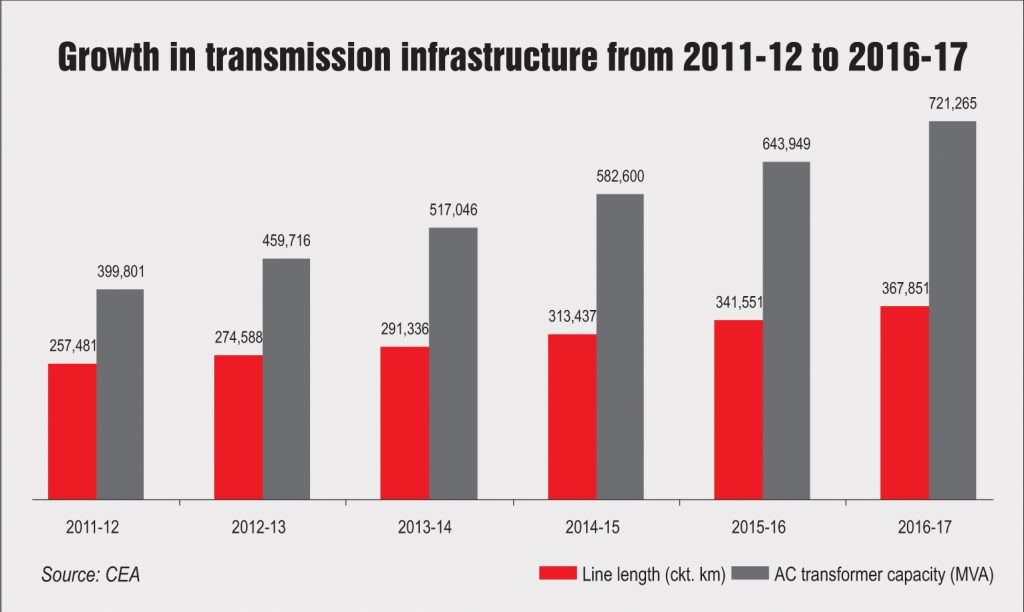 Policy and regulatory measures in the power sector have consistently supported growth in the transmission segment. In the past year and a half, the Central Electricity Regulatory Commission (CERC) has notified key regulations, which had been long awaited by the industry. The most prominent among these, the Ancillary Services Operation Regulation was notified in August 2015 with an objective to restore frequencies to within the prescribed levels and relieve transmission congestion.

On January 20, 2016, the cabinet approved the amendments to the National Tariff Policy, 2006, with the aim of aligning it with the current state of the power sector. The amended policy stated that all transmission projects should be awarded through the tariff-based competitive bidding route to ensure greater transparency in project awards. Besides, it stressed on the creation of adequate transmission capacity to enable increased access to low-cost power. Further, wind and solar plants have been exempted from paying interstate transmission system (ISTS) charges and sharing ISTS losses. The Ministry of Power (MoP) also released the Guidelines on Cross-border Trade of Electricity in December 2016, thus providing a policy framework to accelerate power exchange across the South Asian region. 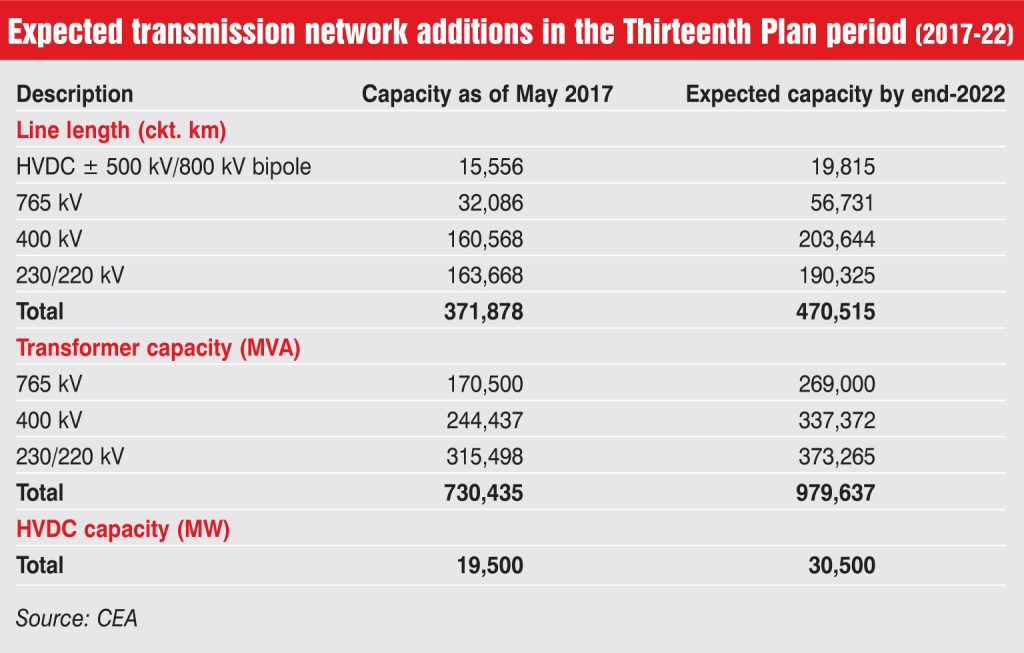 The central government has notified plans to increase the renewable energy capacity to 175 GW by 2022 from the current level of about 57 GW. In order to ensure grid integration of such a huge capacity, the sector is implementing the Green Energy Corridors (GEC) project to enable the flow of renewable energy into the national grid network. The programme has been divided into two phases – GEC I and GEC II. GEC I has been designed to support a total of 33 GW of solar and wind power, while GEC II will help evacuate 20,000 MW of solar capacity through interstate and intra-state transmission systems.

The key components under GEC I include pooling stations at  Bhuj, Banaskantha, Chittorgarh, Ajmer, Bikaner and Tirunelveli, as well as other control infrastructure like forecasting of renewable generation, balancing infrastructure, dynamic compensation, renewable energy management centres and real-time monitoring. Overall, about 17,000 ckt. km of line and 34,650 MVA of transformation capacity addition is planned under GEC I, which is being funded by German development bank KfW and the Asian Development Bank. The implementation timeline for various elements in GEC I is from April 2017 to May 2019.

GEC II envisages a total investment of about Rs 128 billion for evacuating power from upcoming solar parks across 19 states. Under the transmission scheme, around 4,206 km of transmission line length and 29,390 MVA of substation capacity would be added along with other transmission infrastructure. The various elements in the scheme are expected to be commissioned by 2021-22. 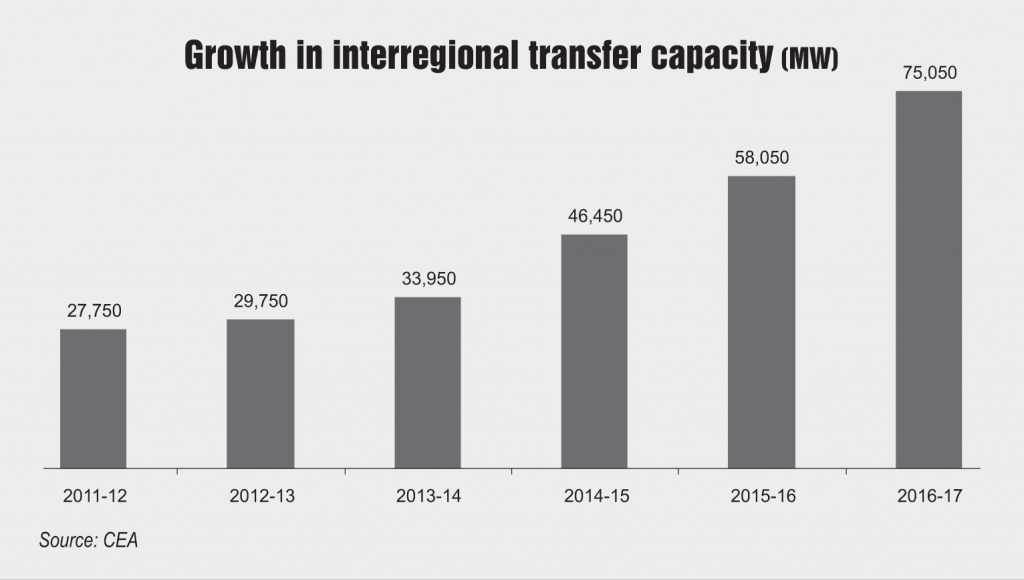 On the policy and regulatory front, the MoP is likely to revise the bidding guidelines for ISTS projects. A key recommendation of the committee undertaking the revision is to award ISTS projects on a build-own-operate-transfer basis, instead of a build-own-operate-maintain basis. In addition, an overhaul of the transmission planning process is under way to align planning with the changing scenario in the sector such as the development of a power market, the integration of renewables and increased congestion. To this end, the CERC notified the draft transmission planning regulations in April 2017.

Going forward, the transmission segment is expected to keep growing at a fast pace to meet the additional power transfer requirement, especially from renewables, to demand centres.

Company Highlights: Key developments in the past 12 months

It was a hectic year for the Indian power sector with significant activity on many fronts. On the generation front, large capacities were added in the coal, hydro and nuclear power segments with public sector […]

With increasing order inflows and high capacity utilisation, the transformer industry is currently on the path to recovery. This can be attributed to various reform initiatives taken by the government to accelerate power sector growth. […]

The distribution segment is the weakest link in the power sector value chain and has been reeling under operational and financial distress. Distribution utilities have been facing challenges including high aggregate technical and commercial (AT&C) […]