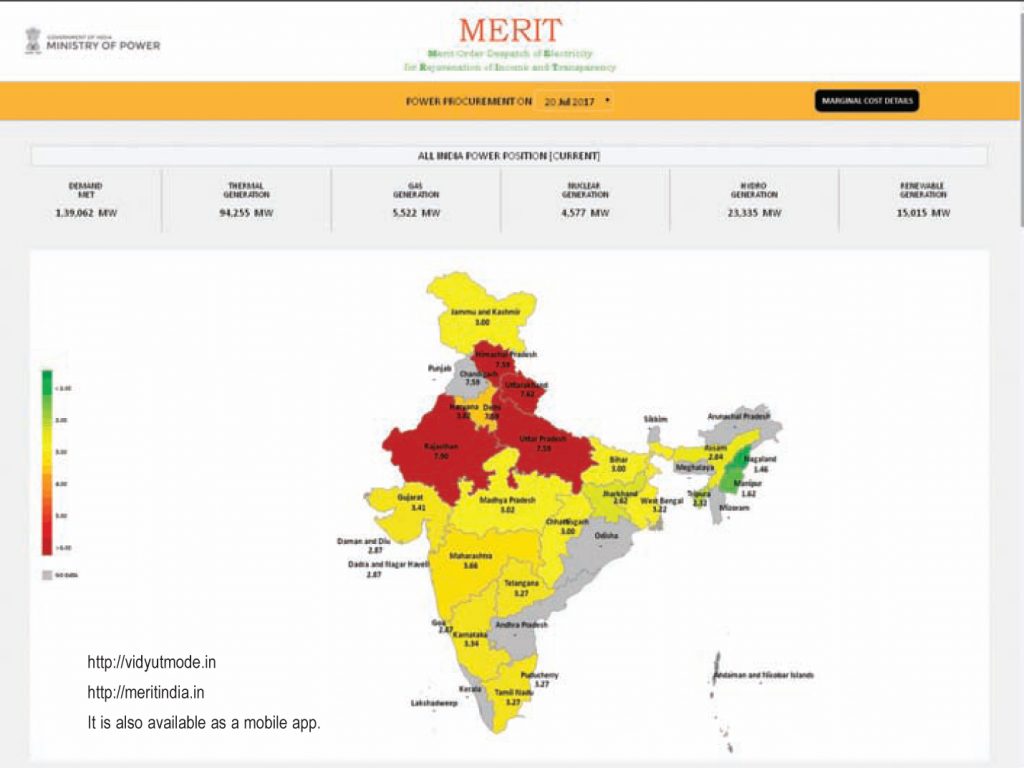 In  the series of web portals and mobile apps being launched by the government to promote transparency and efficiency in the power sector, the MERIT (Merit Order Despatch of Electricity for Rejuvenation of Income and Transparency) portal/app has been the most recent addition. The portal has been developed by the Ministry of Power (MoP) in association with Power System Operation Corporation Limited (POSOCO) and the Central Electricity Authority (CEA), to manage and track the merit order despatch of power.

The portal/app displays a wide range of information related to the merit order including the all-India power demand and source-wise generation, the power procurement portfolio of each state, daily state-wise marginal costs of all power plants, daily plant-wise declared and scheduled energy summary for all states, source-wise power purchased, and power purchase costs for various states. It also gives reasons for deviation from the merit order such as “must run” conditions and transmission constraints.

As per the Electricity Act, 2003 and the National Tariff Policy, 2016, the procurement of power should be based on the merit order despatch principle. Further, the policy states that the merit order mechanism should be uniform across states. While most states claim to follow the merit order principle, it is not known whether they actually adhere to it. If not, what is the quantum of deviation from the merit order? In order to resolve these issues and facilitate renewable integration, a Merit Order Despatch Committee was formed in October 2016, with the chairperson of the CEA as its chairperson, and joint secretary of the MoP as its member secretary. The committee also had representatives from the Ministry of New and Renewable Energy, regulatory commissions, POSOCO and state load despatch centres (SLDCs).

One of the key recommendations of the committee was the development of a web portal on which merit order information of each state/discom should be made available, with the data being updated on a regular basis. After deliberations with the states, it was resolved in May 2017 that the states will share their merit order despatch data on a regular basis. Subsequently, the MERIT portal was launched on June 23, 2017, along with the weather portal for the power sector.

Some of the other recommendations of the committee pertaining to merit order operation were formulation of detailed guidelines/framework for the state electricity regulatory commissions (SERCs), preparation of merit order at state periphery on the basis of variable cost of generation along with transmission losses, and consideration of inter-state transmission charges only for short-term transactions while preparing the merit order stack.

The committee also suggested measures to ensure the must run status of renewables. To this end, it suggested a compensatory mechanism for the curtailment of renewable energy-based generation citing various reasons such as transmission constraints, grid security and low system demand. It also suggested that the provision of compensation for curtailment would be applicable only to stations giving day-ahead forecasts and schedules. 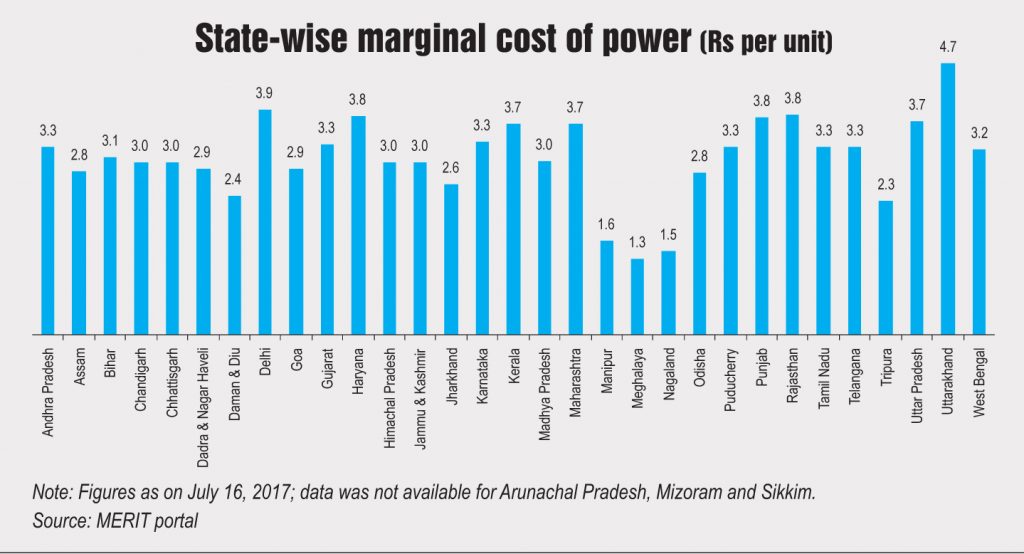 For the portal, the data is collated by the SLDCs of each state and is directly uploaded by them, as per the data formats prepared by the CEA. On a daily basis, the SLDCs upload data on the availability of each source as well as the scheduled energy on the basis of the merit order, along with a report specifying the reason for deviating from the merit order, if any. The portal gives data for the last seven days.

The information available on the portal is likely to help states optimise their power procurement strategies, leading to lower overall power purchase cost for the discoms as well as the consumers. It will also ensure the must-run status of hydro and other renewable energy sources, thereby promoting the use of clean power. It will also promote competition among generators for lower costs by providing information to all stakeholders including generators and utilities. In addition, this will create pressure on the discoms to procure power efficiently since the information will be available to consumers as well.

The broad advantages of the MERIT portal include consumer empowerment, participative governance, transparency pertaining to power procurement, efficient operations, better understanding of the utility portfolio, optimisation of the power procurement costs, integration of renewable energy, and better know-how of the supply side reliability and adequacy. 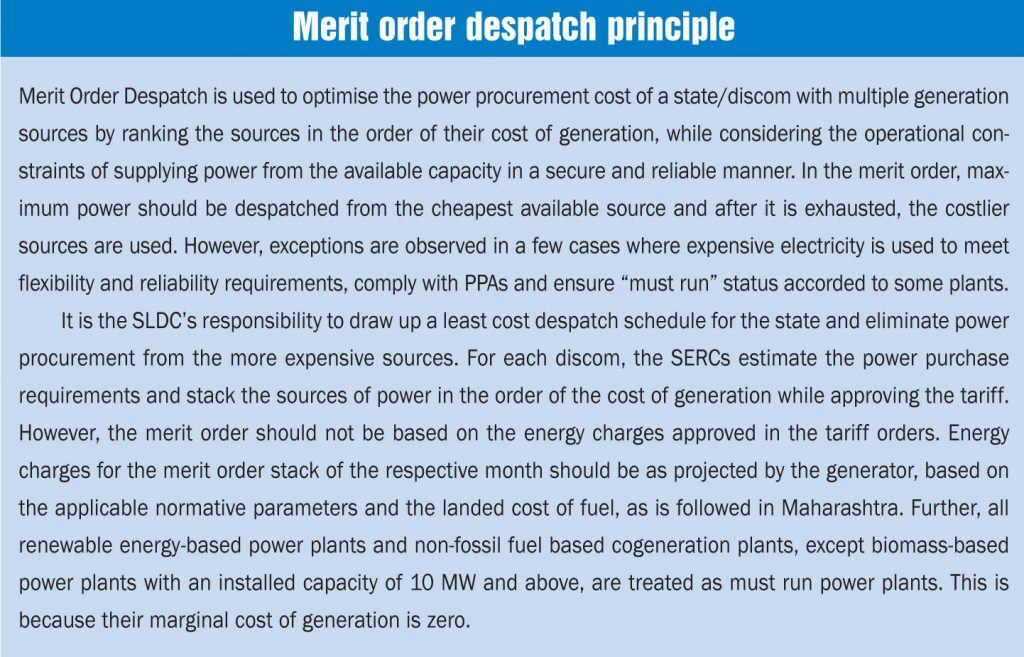 The launch of the portal is a notable step in bringing about transparency in the power procurement process of the states. Reportedly, power utilities can save as much as Rs 200,000 million through improved scheduling with the support of this portal. While it is well known that there is a huge potential for the replacement of high cost power, it remains to be seen how the portal will be utilised to do so.

Meanwhile, the rationality of the merit orders and power procurement strategies must be reassessed, especially in view of the low prices prevailing in the short-term market. While such as West Bengal, Rajasthan and Bihar have already achieved significant savings through the optimisation of power procurement strategies, some states continue to buy expensive power under the long-term power purchase agreements (PPAs) despite the availability of cheaper options.

Another emerging concept is that of a national merit order despatch in the context of central generating stations. Many such stations are currently under-scheduled because of state-wise power allocation. While these plants may not be the cheapest sources of power in a particular state, they may be so for some other state/region. But if the latter is not an allotted beneficiary of the plant, it cannot procure power from it. This results in the creation of unrequisitioned surplus and an increase in the overall average cost of power for the country. Thus, going ahead, there is a need to optimise power procurement at the national level, in addition to the state and regional levels.

Pilot Procurement Scheme: Some respite for gencos as PTC signs first round of PPAs

After a long lull, there is some visibility on the power purchase agreement (PPA) front for power gencos. In October this year, the first round of PPAs were signed under the government’s medium-term power procurement […]

The amount of generation from renewable energy-based sources has increased considerably over the years. It is expected to increase further in the coming years in line with the sustainable development goals that aim to provide […]