Renewable energy has experienced tremendous growth in the past one year, with its cumulative installed capacity surpassing that of hydroelectric power. As of March 2017, the country’s total renewable energy capacity stood at around 52 GW, accounting for 16 per cent of the total installed capacity as against hydro projects, which stood at 14 per cent. The growth in capacity can be mainly attributed to the favourable regulations and policies for achieving the 175 GW renewable energy target by 2022. Factors such as continuous fall in capital costs and a conducive business environment at the central and state levels have also helped drive the growth. Until recently, the renewable energy sector was driven by grants and subsidies. However, with the government eliminating generation-based incentives (GBIs) and  reducing accelerated depreciation (AD) benefits from 80 per cent to 40 per cent from April 2017, the sector is fast moving towards self-sustainability.

Of the country’s total installed renewable energy capacity, solar power accounts for 12.3 GW (as of March 2017), while wind power capacity stands at 32 GW. The last fiscal year (2016-17) was the most successful one for the renewable energy sector as it saw a capacity addition of 11.5 GW, at par with the thermal capacity addition. In fact, 5.8 GW of this capacity was added in a single month before the close of the financial year. Some other significant highlights during the year were the 750 MW Rewa and 250 MW NTPC Kadapa tenders that saw solar tariffs falling to an all-time low of Rs 3.30 per unit and Rs 3.15 per unit respectively. Besides, the wind segment switched from the traditional feed-in tariff regime to competitive bidding for project allocation, with the first tender floated by the Solar Energy Corporation of India (SECI) for 1,000 MW of capacity.

In addition to record installations, the year also saw tariffs falling down to Rs 3.30 per unit as recorded in the 750 MW Rewa solar project tender results. Mahindra Renewables, ACME Solar Holdings and Solenergi Power won a tendered capacity of 250 MW each. Many factors such as timing and ready off takers contributed to Rewa’s success despite the challenges facing the solar power segment like delays in discom payments, land acquisition and power evacuation issues. In April 2017, the tariffs fell further owing to NTPC’s auction of 250 MW of capacity at its Kadapa ultramega solar park in Andhra Pradesh. Solairedirect won the entire auctioned capacity at a tariff of Rs 3.15 per unit.

Despite being a record year, capacity addition in the solar segment could not meet even half of the 12 GW target. One of the key reasons was the disappointing performance of the rooftop solar segment, which added only 500 MW of capacity during the year. However, it is likely to increase significantly on the back of lower tariffs and the mandate to install rooftop solar plants on all government-owned buildings. Further, Indian Railways has committed to install 5 GW of renewable energy by 2025 at an investment of $3.6 billion. Of this, around 1.1 GW is expected to come from rooftop solar plants.

The regulatory changes brought by the government were primarily responsible for the high capacity additions in the year. The reduction in AD from 80 per cent to 40 per cent starting April 2017 compelled developers to commission projects before the deadline. In addition, uncertainties surrounding the fate of GBIs  in the new financial year have also played a key role in increasing capacity additions. Another significant change in the wind segment was the introduction of the competitive bidding regime. The first reverse auction for wind energy took place during 2016-17. The 1,000 MW tender auctioned by SECI was oversubscribed by nearly 2.6 times. Tender results released in February 2017 saw the prices falling to a record low of Rs 3.46 per unit, nearly disrupting the segment. 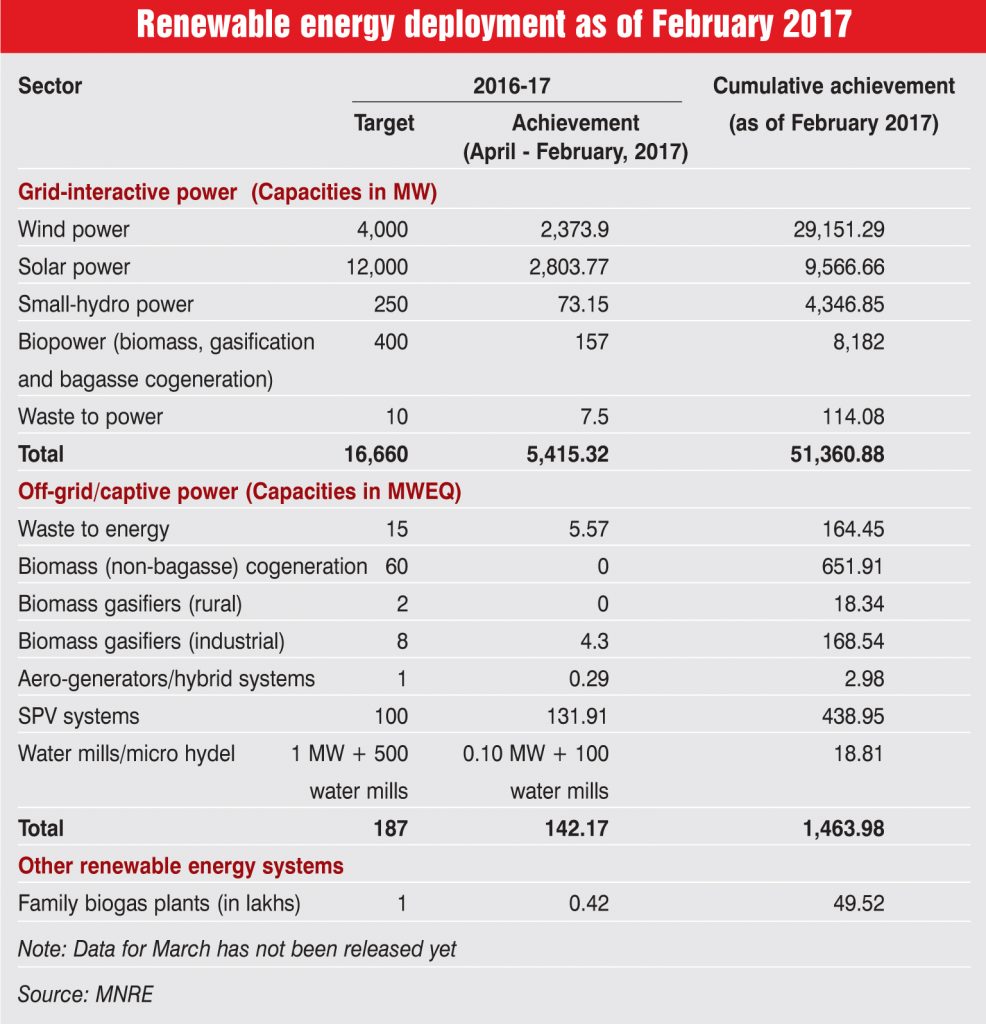 As of February 2017, the cumulative small-hydro power (SHP) capacity stands at 4,346.8 MW. The segment added only 73.15 MW in 2016-17 against the target of 250 MW set by the Ministry of New and Renewable Energy. Policy ambiguity and technological issues such as long gestation periods as well as uncertainties due to rainfall and lack of weather forecasting methods have restricted the growth of this segment even at places with high potential. Also, developer interest has been waning on account of falling tariffs. To increase interest, the government plans to introduce a competitive bidding regime for the allocation of SHP projects. However, not all stakeholders have supported the move.

The government has tried to focus its attention on the biopower segment over the past two years. A Rs 100 billion Integrated Bioenergy Mission is planned to be launched for the period 2017-18 to 2021-22, to achieve the target of adding 10 GW by 2022. With about 157 MW added during the year, the cumulative capacity stands at 8,182 MW as of February 2017. This, however, is far short of the target of 400 MW allocated to the segment. Limited regulatory support and lack of availability of raw material at low prices, poor storage infrastructure and improper operations and maintenance have contributed to the sluggish growth of this segment. The waste-to-energy (WtE) segment recorded a capacity addition of 7.5 MW as of February 2017, against a target of 10 MW to bring the cumulative capacity to 114.08 MW.

The renewable energy sector faces many challenges, the key one being the issue of grid integration. The intermittent and variable nature of renewable energy requires a sophisticated grid network for efficient power evacuation. Moreover, efficient forecasting and scheduling guidelines need to be established and adhered to for better grid integration.

The solar segment in particular has been facing evacuation challenges, thereby dampening investor interest. States such as Tamil Nadu and Rajasthan have asked operators to reduce generation due to the grid’s inability to evacuate power from the plants. This led to a lukewarm response to the latest tenders. For instance, a recent tender floated by the Tamil Nadu Energy Development Agency received bids from only the state’s own distribution company, Tamil Nadu Generation and Distribution Corporation. In another case, NTPC retendered 750 MW of solar capacity at its Pavagada Solar Park, which was first tendered in February 2017, due to the lack of evacuation infrastructure.

Apart from power evacuation issues, the wind segment also has to deal with challenges associated with old projects blocking good wind potential sites. Besides, there are delays in the signing of power purchase agreements with discoms, issues related to delayed payments by the off-takers and a general sentiment of not procuring power from wind projects due to its expensive nature.

The renewable energy sector is growing rapidly on the back of the government’s efforts to achieve the target of 175 GW of installed capacity by 2022, which resulted in record capacity additions in 2016-17.

The quantum of investments in the renewable energy sector has also increased. In 2016-17, investments stood at $14 billion, twice the size of those in 2015-16 and more than thrice those in 2014-15. In comparison, the total investment in the sector stood at $4 billion.

As of March 2017, 14 GW of capacity is  under construction in the solar segment, most of which is expected to be commissioned in the ongoing fiscal year. In addition to this, 6 GW of solar capacity will be auctioned. Going forward, the share of renewable energy in the country’s power generation portfolio is set to increase significantly, in tandem with the government’s commitment of becoming a greener economy at the Paris summit. 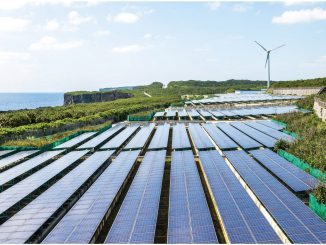 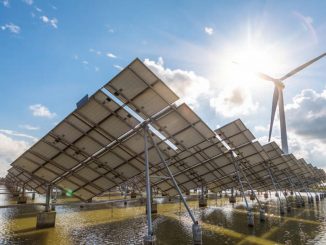 May 2017
Off-grid renewable energy systems are increasingly being viewed as a means to provide sustainable and cheap electricity [...]
More 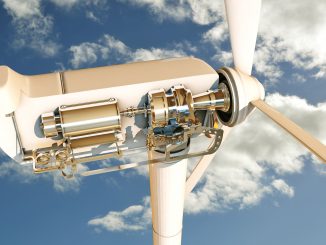 May 2017
Over the past few decades, technological advancements, along with finance and business model innovations, have led to [...]
More