Lack of access to finance has been a long-standing hurdle in the path of renewable energy growth. Where capital has been available, the terms have often been unfavourable for long-term sustainability. However, with a growing influx of funds into the sector over the past few years, access to competitive capital seems to be improving. A look at the key deals in the renewables space in 2016-17…

For a sector that began with low investor confidence, renewable energy has moved rapidly towards dynamic growth. Consolidation in the form of mergers and acquisitions (M&As) has been a preferred growth route for companies. The trend has now assumed greater significance with deal values increasing in size and big market players being acquired by even bigger players.

The acquisition of Welspun Renewables by Tata Power Renewable Energy Limited (TPREL) was a highlight deal of the past year. In June 2016, TPREL bought 100 per cent stake in the Indian business of Welspun Renewables for about Rs 92 billion, making it one of the biggest deals in the history of the Indian renewable energy sector. The deal added about 1,140 MW of assets (88 per cent solar and 12 per cent wind) to TPREL’s existing portfolio, taking it to 2,300 MW. With falling tariffs and prices, it was becoming increasingly difficult for Welspun to focus on renewable energy, which is not its core competency.

Other highlights included the acquisition of US-based renewable energy company SunEdison’s Indian assets by the Greenko Group for about $392 million in October 2016. Interestingly, this followed the investment of $230 million made by the Abu Dhabi Investment Authority (ADIA) and Singapore’s sovereign wealth fund GIC in the Greenko Group in June 2016. In another deal, Sembcorp acquired 74 per cent stake in Mulanur Renewable Energy Private Company Limited. Germany-based Senvion’s acquisition of wind turbine manufacturer Kenersys India for an undisclosed amount in August 2016 was yet another major deal.

Equity deals also serve as a market entry strategy for many companies. Global companies are increasingly entering the Indian renewable energy space with the aim of investing in and profiting from the growing sector. In February 2017, Japan-based JERA, Inc., a joint venture between the Tokyo Electric Power Corporation and Chubu Electric Power, acquired a 10 per cent stake in ReNew Power Ventures Private Limited for $200 million. Another emerging trend is the purchase of stakes in Indian renewable energy companies by global financial institutions. The purchase of an undisclosed stake in Hero Future Energies by the International Finance Corporation (IFC) for $125 million in January 2017 and ADIA’s investment of $265 million in ReNew Power are examples. 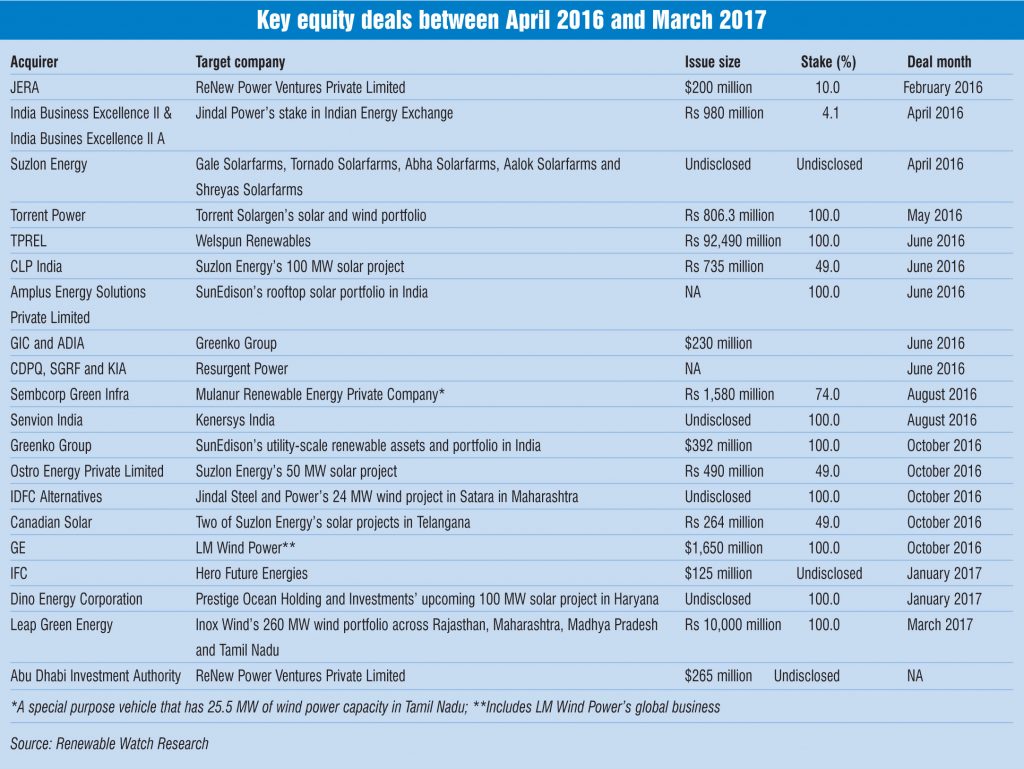 Project equity too has emerged as a new tool for companies to invest in the renewable energy market. Project equity deals refer to the purchase of assets (or stakes) of the target company instead of purchasing equity in the company. US-based solar panel manufacturer First Solar is looking to sell 200 MW out of its total solar assets of 260 MW in India, potentially fetching $200 million for the company. Macquarie Infrastructure and Real Assets (MIRA) is in the process of acquiring 320 MW of Hindustan Power Projects’ solar assets in a deal potentially valued at $300 million. This will mark MIRA’s entry into the Indian renewable energy market. Kiran Energy Solar Power is also seeking buyers for its 83 MW solar portfolio. Amplus Energy Solutions, backed by private equity firm I Squared Capital, has shown interest in the deal.

Green and masala bonds have emerged as alternative financial mechanisms to provide capital on competitive terms for renewable energy projects. Started in 2007, the green bond market has grown to a cumulative valuation of $180 billion globally, with the issuance increasing up to $81 billion in 2016, nearly double the amount of $42 billion in 2015. The first green bond in India was issued by YES Bank in 2015 and the market has grown significantly since then to cumulatively reach $2.7 billion in 2016, making the country the seventh largest green bond market in the world.

Since the issuance of YES Bank’s $3,300 million bond with a term of seven years, several public and private companies have issued bonds. Primary among these are masala rupee bonds worth Rs 20,000 million issued by NTPC in October 2016. These bonds have a five-year maturity and an interest rate of 7.48 per cent. NHPC issued corporate bonds worth Rs 45,000 million, while Axis Bank issued maiden green bonds of $500 million in June 2016.

Multilateral banks and financial institutions are increasingly extending loans and commercial borrowings to companies in the Indian renewable energy space. Owing to consistent growth and positive returns, more than 24 commercial borrowing deals have taken place over the past year.

Institutions such as the Asian Development Bank (ADB) and the World Bank Group have been primary providers of loans to renewable energy companies. ADB gave a $390 million loan to ReNew Power and another Rs 11,375 million to Mytrah Energy Limited. The latter loan will be released on a project finance basis. ADB also provided a $1 billion loan to Power Grid Corporation of India Limited (Powergrid) to strengthen grid infrastructure. In an institution-to-institution deal, ADB loaned another $200 million to the Indian Renewable Energy Development Agency (IREDA), which provides low-interest capital for renewable energy development.

The World Bank Group has extended loans worth about $1.02 billion to the Indian government for the development of the renewable energy sector. This is in addition to the $625 million given to the State Bank of India as a long-term loan. German government-owned development bank KfW has extended loans worth Rs 3,000 million to Kerala and Maharashtra for the development of two large floating solar park projects with a cumulative capacity of at least 40 MW. It has provided another $1 billion to the Indian government as a soft loan (given below the market interest rate). The New Development Bank (formerly known as BRICS Development Bank) has given a $250 million loan to Canara Bank for investment in the renewable energy space.

In addition to various global banks, international non-banking financial companies have also provided long-term capital as loans to renewable energy companies. These include multiple loans by the Overseas Private Investment Corporation (OPIC), an independent US government agency. OPIC loaned $20 million to Azure Power for a period of 15 years at a capital cost of 4.74 per cent. It also provided $250 million to ReNew Power and another $20 million to the Indian government.

The renewable energy sector in India has to grow at about 25 GW per annum to achieve the 175 GW by 2022 target, which would require huge amounts of investments. While access to capital has improved over the years, market sustainability has become a challenge with tariffs and returns on investment decreasing. Moreover, with the increase in the number of incidents of backing down generation from renewable energy projects in states such as Tamil Nadu and Rajasthan, as well as defaults on payments by discoms, investor confidence has begun to shake. Despite these challenges, the government is determined to push the sector towards the target set, thus calling for increased capital investments. In such a scenario, M&As are likely to continue not only at the parent company or subsidiary level, but also at the project and asset levels. Given the dynamism of the renewable energy market, funds are expected to continue to flow in, while factors like low entry and exit barriers will continue to drive greater equity-based deals in the sector. 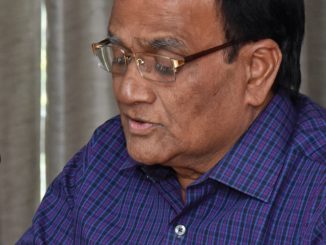 Views of JVVNL’s R.G. Gupta
“We are heading towards a healthier grid”