Indian Railways (IR) operates the world’s fourth largest rail network spread over 66,500 route km. The system runs nearly 19,000 trains every day, carries 24 million passengers per day, and transports more than 1.1 billion tonnes of freight per year across the length and breadth of the country.

IR is also the largest energy consumer in India, utilising nearly 20 billion units per year, with a peak demand of nearly 4,000 MW. In addition, it consumes almost 2.8 billion litres of diesel per year, that is, around 3.2 per cent of the total diesel consumption in the transport sector. Energy is the second biggest expenditure item for the organisation, accounting for about 24 per cent of its ordinary working expenses.

In 2015-16, IR spent almost Rs 270 billion on energy. The system’s demand for electricity is expected to triple by 2030 to 49 TWh due to increasing passenger and freight volume and electrification of the network. 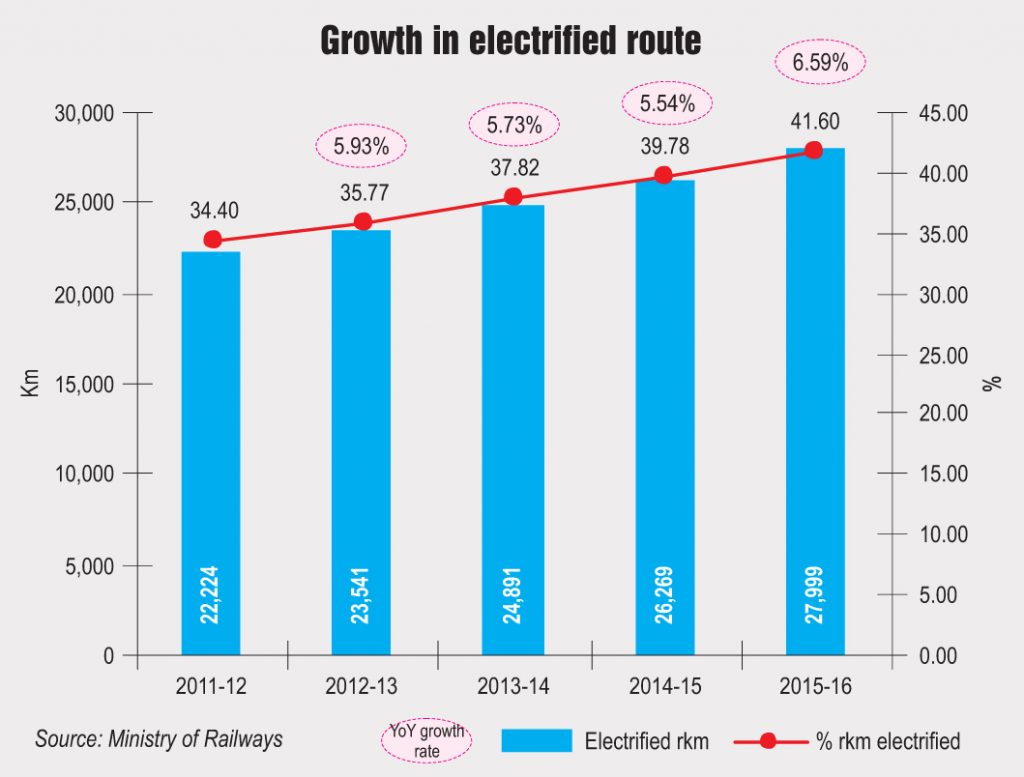 Of the 66,500 route km operated by IR, nearly 42 per cent is electrified, which accounts for 85 per cent of the total electricity consumption of the network. IR’s electrified rail network is connected at the 132 kV level with the state grid system, and utilises power at 25 kV alternating current (AC), 50 Hz on a single phase. The energy is distributed to the traction powering units through the overhead electric wire network on railway tracks. The railway system is directly connected to state transmission utilities and energy is consumed irrespective of the state boundaries. Region wise, about 60 per cent of IR’s traction power network is in the western and eastern regions.

About 64.8 per cent of freight and 51.3 per cent of passenger traffic is hauled by electric traction. The remaining traffic is hauled using diesel, or a blend of 5 per cent biodiesel in high speed diesel (HSD). The power consumed for traction (15.7 TWh) costs an average of Rs 6.80 per kWh, growing at 4 per cent per annum. However, the cost of running a train on diesel is four times the cost of running a train on electricity.

Therefore, IR is transitioning from a diesel-powered network to an electrified one in order to reduce its operational costs and meet its national decarbonisation commitments. Under the Paris agreement on climate change, India has pledged to reduce its emissions intensity by 33-35 per cent from the 2005 levels by 2030. Electrification leads to a reduction in greenhouse gas emissions of 3.36 million tonnes per year. The transition to an electrified rail network will enable the integration of renewable energy alternatives such as solar and wind. In addition, electrification will reduce the dependence of the system on imported fuel. It will also be suitable for heavy traffic density, and thus lead to decongestion of highways.

As compared to 800 km of average electrification in earlier years, 1,600 route km was electrified in 2015-16. Electrification would reduce the consumption of imported oil, thus reducing the burden on the exchequer. 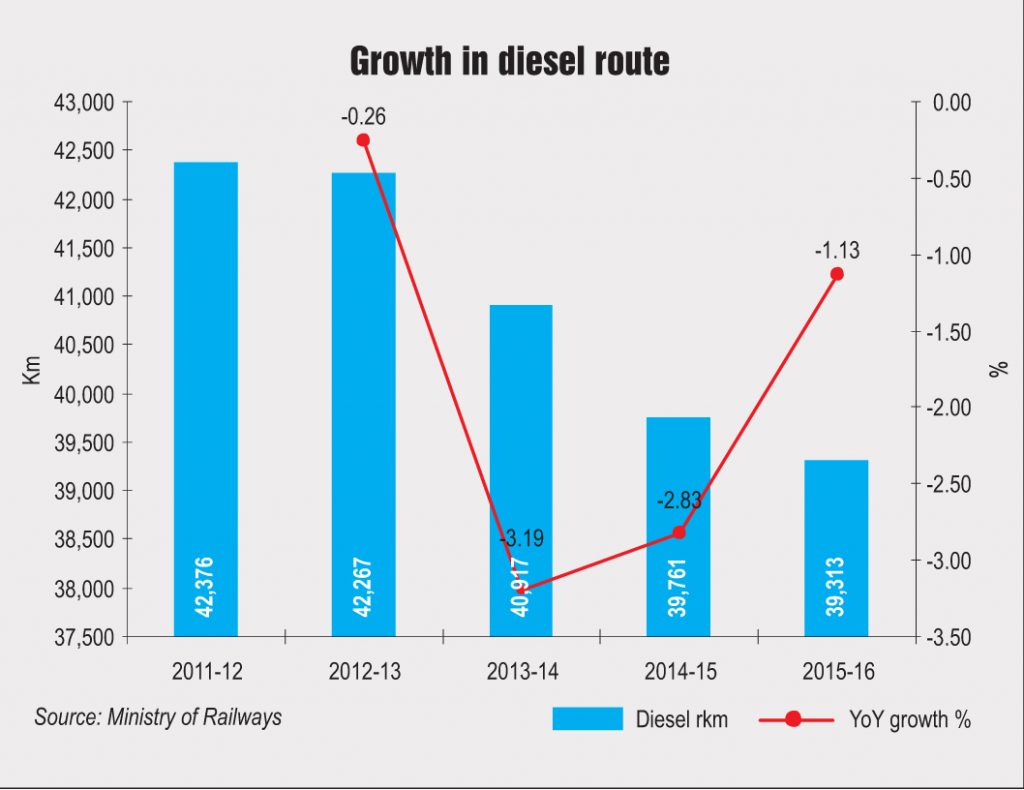 As part of the action plan, the acquisition and introduction of new energy-efficient rolling stock has been initiated. A project has been awarded to Madhepura Electric Locomotive Private Limited, a joint venture (JV) of the Ministry of Railways and Alstom Manufacturing India Limited, to manufacture, supply and maintain state-of-art 12,000 horsepower (HP) energy-efficient locomotives. Also, Chittranjan Locomotive Works has completely switched to the production of only energy-efficient insulated-gate bipolar transistor-based high HP three-phase locomotives.

IR has introduced the head on generation (HoG) system, wherein the lighting, air conditioning and other electrical loads would be met through electric power drawn by locomotives from the grid. This system will eliminate the need for diesel-powered cars for supplying electricity to coaches, and help carry additional passengers.

All new electric multiple units produced will be energy efficient and will have three-phase technology with regeneration capability. Since 2007, around 200 energy-efficient rakes with regenerative braking features have been introduced in the Mumbai suburban area. In order to meet the increased requirement of electric locomotives resulting from accelerated electrification, IR has decided to manufacture electric locomotives at Diesel Locomotive Works, Varanasi, also.

The Electricity Act, 2003 provides IR with deemed distribution licensee status, allowing it to buy energy directly from generation companies. Until 2015, IR had been buying electricity from distribution utilities as a bulk consumer. As the rates offered by the distribution utilities were very high, in 2014, IR sought a clarification from the Central Electricity Regulatory Commission (CERC) on its status as a deemed distribution licensee. In November 2015, the CERC issued a clarification that IR is authorised to undertake power transmission and distribution. Further, it directed all regional load despatch centres, state transmission utilities and state load despatch centres to facilitate the railways’ medium- and long-term access from the generating unit and other sources.

Consequently, IR switched to procuring part of its electricity requirement directly from the market through the bidding route for short-term and long-term contracts. Currently, a total of 730 MW is being supplied under four power purchase agreements (PPAs) signed by IR, 550 MW power from Ratnagiri Gas and Power Private Limited, 80 MW from Tata Power, and 50 MW each from NTPC and Adani Power. With these efforts, the average rate of procuring power has reduced by around 35 per cent. Overall, the average rate of procuring power has reduced from Rs 7.07 per kWh (rate at which power is purchased from state distribution utilities) to Rs 4.61 per kWh.

New tenders for direct power purchase have been finalised with Jindal India Thermal Power for the northern, eastern and western regions, for a period of three years. While PPAs have been signed, IR has received no-objection certificates only from Madhya Pradesh and Rajasthan so far. Meanwhile, Railway Energy Management Company Limited has finalised a tender for procuring 400 MW of power for the southern region for nine months. This will later be replaced with a medium-term contract.

To further reduce its energy costs, IR is also setting up its first coal-based captive power plant (CPP) at Nabinagar, Bihar, in a JV with NTPC. The plant will have a total installed capacity of 1,000 MW, comprising four units of 250 MW each. The first unit was commissioned on March 30, 2016 and is expected to cover 26 traction substations in West Bengal. The plant is expected to result in annual savings of Rs 2 billion. IR has also announced its plans to set up a 1,320 MW coal-based CPP at Adra, West Bengal, in a JV with NTPC, and a 700 MW gas-based captive power plant at Thakurli in Maharashtra.

Further, IR is expanding its dedicated transmission network from its current network from Dadri to Kanpur and from Kanpur to Allahabad. It has sanctioned construction of 6,790 km of transmission network covering seven routes in the coming three to four years. The Mughalsarai-Son Nagar and Allahabad-Mughalsarai routes spanning a total length of 290 km will be developed with IR’s own resources and the Mughalsarai-Howrah, Delhi-Bharuch and Howrah-Mumbai routes, spanning 3,800 km, will be developed through the tariff-based competitive bidding process. 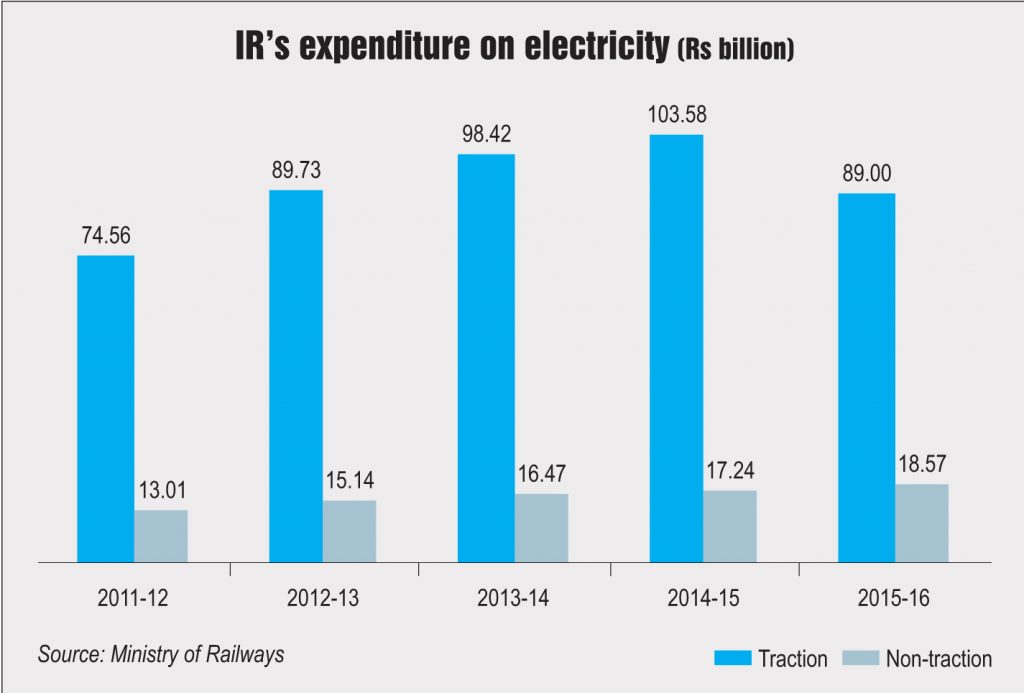 At present, IR has an installed renewable capacity of 53 MW, which includes 16 MW of solar and 37 MW of wind. Around 218 stations have rooftop solar plants.

The operational solar capacity includes a 2 MW solar power plant at the Modern Coach Factory, Rae Bareily, a 1 MW solar power plant at the Katra railway station, a 30 kW solar plant at the Railway Board, 5 MW of solar power at various stations and a solar-based lighting system at levelcrossing gates. The operational wind power capacity includes a 10.5 MW windmill plant set up in Tamil Nadu in 2009 for meeting the non-traction energy demand of the Integral Coach Factory, Chennai, and a 26 MW plant  commissioned in 2015, in Jaisalmer, Rajasthan, to supply power to three traction substations of the Kota division.

Under a United Nations Development Programme (UNDP) initiative, IR has set a target of 5 GW of solar deployment across the country by 2025. This will attract billions in private investment for IR, and increase solar power generation capacity fivefold against the railways’ target of 1 GW. Further, this would contribute around 5 per cent to the national solar target of 100 GW.

IR plans to reach 1 GW of installed solar capacity by 2020 as announced in February 2015, and is currently working on a plan to implement this capacity. Large-scale solar photovoltaic projects are likely to come up on the vast area of unused land available with the railway sector. This capacity will be set up with support from the Ministry of New and Renewable Energy and through financial assistance from the National Clean Energy Fund. 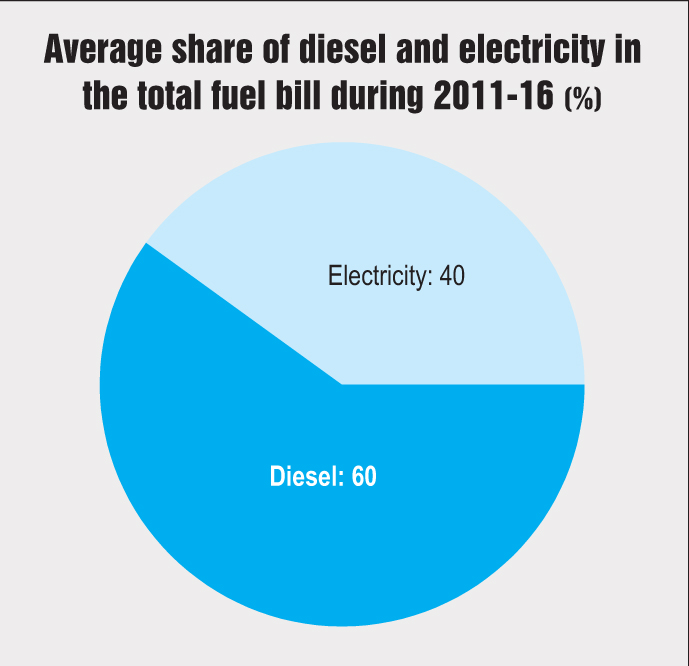 Of the 18.25 TWh of electricity that IR consumes, only 15 per cent is used in the non-traction area. The 2.5 billion kWh of energy consumed for non-traction purposes costs IR an average of Rs 7-Rs 7.50 per kWh. This electricity is used to feed the manufacturing workshops, maintenance depots, colonies, station areas and platforms. This demand has largely remained the same over the past 10 years, reflecting the impact of energy efficiency measures.

Several steps have been taken in the non-traction area to reduce energy consumption. These include improving efficiency, and shifting to renewables and automation. Improvements in energy efficiency can be attributed to the implementation of LED lighting at all stations; the energy audit of installations having loads greater than 100 kW, using a web-based electrical energy management system, Railsaver, done to assess the demand profile and actual end-use to map the energy consumption pattern; the use of three-star and above rated electrical products and equipment, and energy-efficient pumps; the use of variable voltage variable frequency control for cranes, lifts and escalators; the use of energy-efficient water coolers and energy-efficient pumps; and the replacement of 60 watt ceiling fans with 35 watt super-efficient ceiling fans. Solar-based LED lighting is being used at all level crossing gates while solar water heaters have been replaced by electric geysers. Some of the other initiatives are deployment of occupancy sensors for office lighting, automation of pumps and installation of automatic platform lighting management systems.

Some of the other energy efficiency measures under consideration are introduction of smart grid technologies and smart metering, and installation of building automation and control systems. 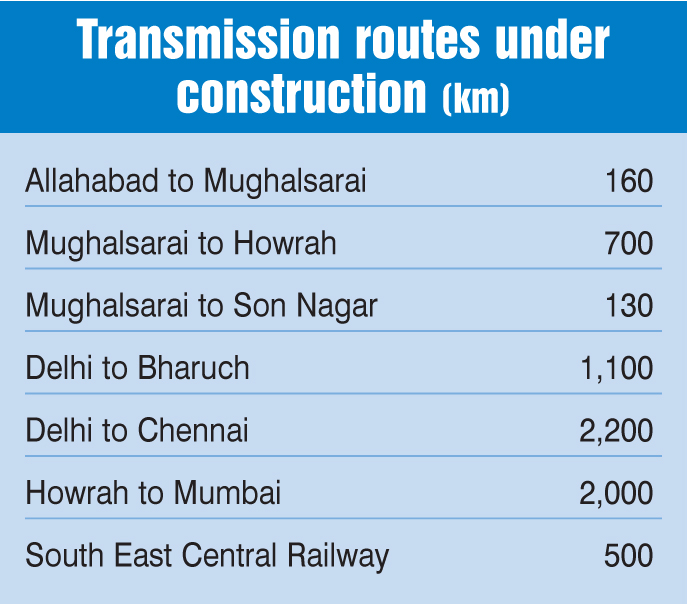 One of most challenging railway projects for the conversion of 1,500 V direct current (DC) traction systems to 25,000 V AC traction systems has been successfully completed in the Mumbai division of Central Railway. This will result in savings of Rs 1 billion-1.2 billion per annum. The engineering, procurement and construction mode of contract execution has been introduced in railway electrification, and the majority of the future contracts will be awarded on this basis. 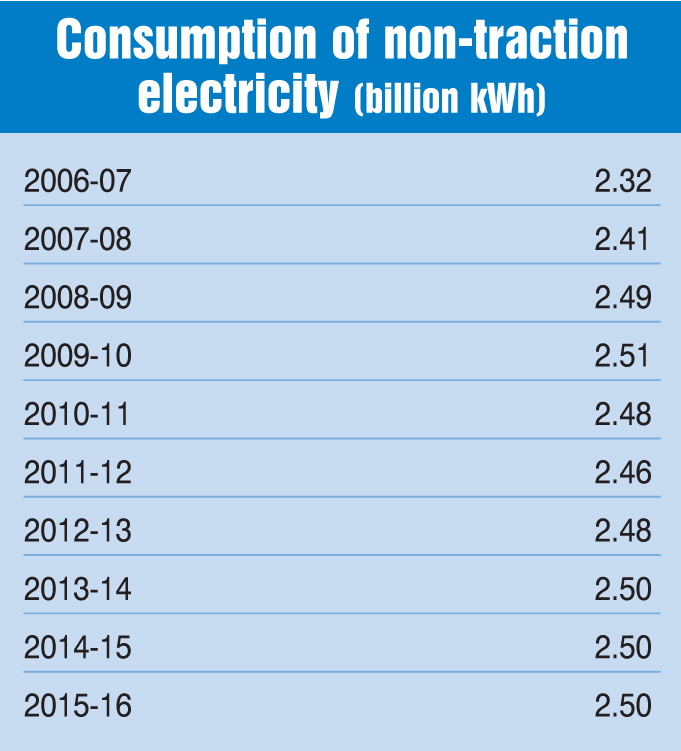 Going forward, the electricity requirements of IR will continue to grow as it pursues greater electrification. With its long-term objective to reduce diesel consumption and the fuel bill, IR is exploring the feasibility of using alternative fuels such as biodiesel, CNG and LNG. In this regard, it plans to blend up to 20 per cent of biodiesel in HSD by 2030. Further, it plans to convert 25 diesel electric multiple unit rakes to run with 20 per cent CNG by 2020 and 100 rakes with 40 per cent CNG by 2030. In addition, it is working on the development of LNG locomotives (80 per cent substitution of HSD). One prototype LNG locomotive is expected to be ready by 2020.

Distributed generation (DG) refers to a variety of technologies that generate electricity near the end users. Some of the DG technologies are solar panels, and combined heat and power (CHP). They may serve a single […]

The much-awaited trading of energy saving certificates (ESCerts), issued under the Perform, Achieve and Trade (PAT) I scheme, commenced on September 26, 2017. Against the backdrop of a sound regulatory and policy framework, ESCerts trading […]

Diesel generator (DG) sets are an important source of power supply for various sectors such as railways, marine, mining, building and construction, and telecom and data centres. Their usage has, however, declined in the commercial […]