State-run power sector infrastructure financing company Rural Electrification Corporation (REC) has come a long way since it was established in 1969. From an initial mandate of energising pumpsets, REC has expanded its activities significantly to include all segments of the sector and currently has a net worth of over Rs 340 billion. At a press conference organised by the company, Dr P.V. Ramesh, chairman and managing director, REC, talked about the company’s ongoing activities and financial and operational performance. Excerpts…

The power sector is going through a major transformation, in terms of outreach, quality, penetration, institutions and the industry. As of date, we have an installed capacity of about 329 GW across 2,200 generating units with an average plant load factor  of 63 per cent while the peak demand is about 160 GW. There is a demand-supply dissonance. The demand is persistently growing; the per capita consumption of electricity is more than 1,100 units today. However, it remains far short of other countries, not only the developed countries but also as compared to the world average as well as BRICS countries. But if we look at particular parts of the country, such as Delhi, the per capita consumption matches and in some cases exceeds that of some developed countries. Overall, the demand still has a long way to go.

In addition, a massive transformation is likely to come from the Ujwal Discom Assurance Yojana (UDAY) through an improvement in the operational and financial efficiency of discoms. Under the scheme, aggregate technical and commercial losses are expected to come down to 15 per cent, the gap between the average cost of supply and the average revenue realised to come down to zero from around 60 paise per unit and power supply to be available for 24 hours from the current average of 19 hours in a day. Overall, there will be an investment of around Rs 15 trillion over the next five years, about Rs 2.5 trillion to Rs 3 trillion per annum.

So, there is a huge need for investment in the power sector. A major push will come from the various schemes being implemented by the government, including the Deendayal Upadhyaya Gram Jyoti Yojana (DDUGJY), UDAY and Power for All, across all spectrums of the power sector. 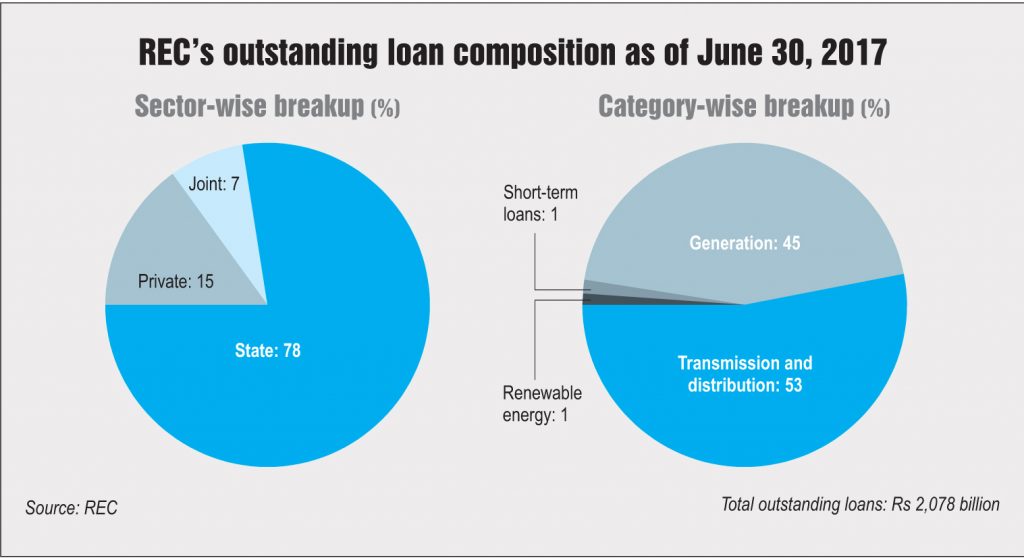 Currently, REC has been financing about Rs 600 billion of annual investments in the power sector and this is expected to grow further to Rs 750 billion to Rs 1,000 billion a year. The company has exposure to all segments of the sector. It has a well diversified portfolio with the top ten borrowers accounting for about 37 per cent of the current loans and the single largest borrower accounting for 6.5 per cent of the total loan book.

In 2016-17, the total sanctions amounted to Rs 838 billion, recording a growth of about 28 per cent over the Rs 654 billion sanctioned in 2015-16. In the first quarter of the current fiscal (April to June 2017), the company has already sanctioned Rs 338 billion. The generation segment accounts for the majority share with sanctions worth Rs 177 billion, followed by the transmission and distribution segments (including the DDUGJY), with sanctions of Rs 142 billion. The major recently sanctioned projects include Tamil Nadu Generation and Distribution Corporation’s (Tangedco) 1,200 MW Udangudi supercritical thermal power project (Rs 104 billion) and the Damodar Valley Corporation’s 500 MW thermal power station in Jharkhand (Rs 29 billion). With respect to disbursements, about Rs 580 billion was disbursed in 2016-17 against Rs 460 billion in 2015-16. In the first quarter of this year, total disbursements of Rs 127 billion have been made. While disbursements to the generation, renewable energy and distribution segments have gone up quarter on quarter, those to the transmission segment and in the form of short-term loans have declined.

In June 2017, the company became the first public sector undertaking to launch green bonds in the international securities market with the issue of $450 million 10-year green bonds. The bonds have been listed on the London Stock Exchange as well as the Singapore Stock Exchange. 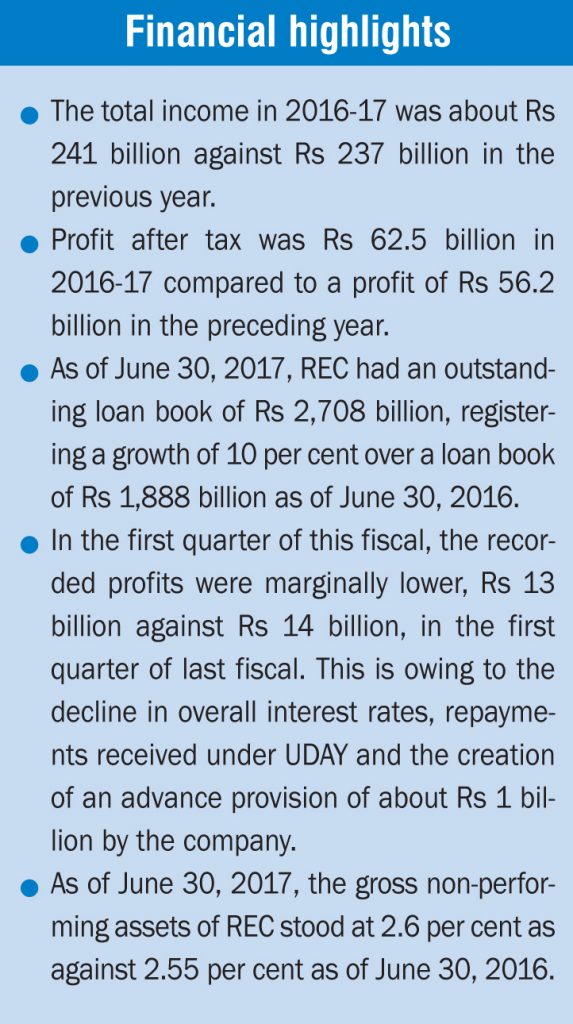 REC is the nodal agency for the implementation of the two major government schemes – DDUGJY, launched in December 2014 to provide electricity to all villages and UDAY, launched in November 2015 for financial and operational performance improvement of discoms. Under the DDUGJY, more than 15,000 villages, of the targeted 18,452 villages, were electrified as of August 1, 2017. Of these, 1,405 villages were electrified in 2014-15, 7,108 in 2015-16 and 6,015 in 2016-17. Overall, the progress has been remarkable, not just in terms of village electrification, but also habitat and household electrification. About 3,300 villages are left to be electrified and are targeted to be electrified by May 1, 2018. However, we are aiming at electrification of all villages by December 2017 itself. These villages are located in interior and inaccessible areas of states such as Assam, Meghalaya, Manipur, Odisha, Bihar, Jharkhand, Chhattisgarh and Madhya Pradesh. But the states and the discoms are well poised to electrify them. While electrification through the expansion of the grid is the most preferred option, it is not possible or economically feasible to do so in some villages. Electrification of such villages is being taken up through solar stand-alone systems or microgrids.

UDAY is showing very promising results. The company has received Rs 420 billion under UDAY – all the repayments that were to be made under the scheme by March 31, 2017. So, we are not expecting any more repayments under UDAY. The funds received under UDAY have already been used for further lending. While it certainly has had an impact in terms of loan book size and non-performing assets that could have grown much bigger, the impact has not been significant in terms of actual profitability. Also, we are a public financial company and are committed to power sector development. UDAY is a scheme aimed at ensuring that the financially encumbered discoms are unburdened so that they can focus on investment. As long as our clients are healthy, we have a robust demand for investment, which is driven by financial health.

Energy Accounting: Metering, billing and collection initiatives across the country

The power distribution segment is plagued with issues of high aggregate technical and commercial (AT&C) lo­ss­es, as well as financial losses, which can be controlled to quite an extent by following adequate metering, billing and […]

Even though the aggregate technical and commercial (AT&C) losses in the distribution segment have declined over the past few years, these losses vary widely across states and continue to pose a challenge for the discoms. […]

Changes at the Top: Key appointments in the past year

Several leadership changes have taken place in the power sector over the past 12 months. The foremost among these was the appointment of a new minister for the sector. Raj Kumar Singh took over the […]