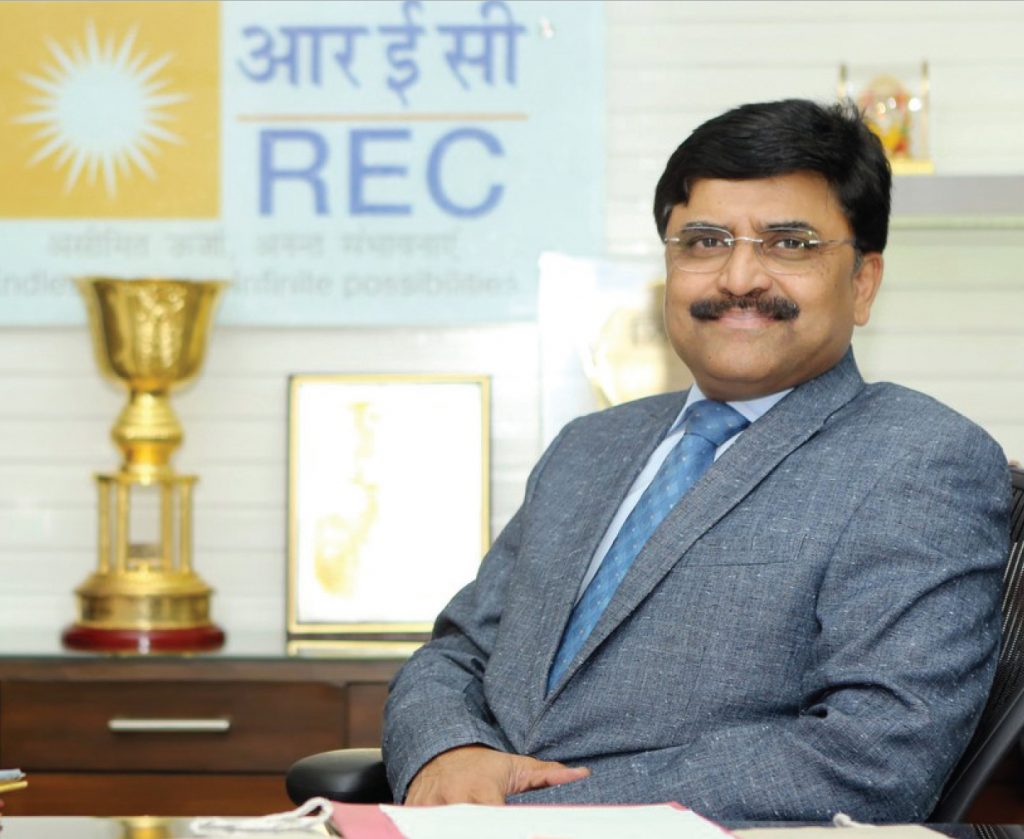 State-owned Rural Electrification Corporation (REC) is a leading financial institution (FI) for the power sector and the nodal agency for various government programmes including the Ujwal Discom Assurance Yojana (UDAY), the Deendayal Upadhyaya Gram Jyoti Yojana (DDUGJY) and Power for All. In a recent interview with Power Line, Dr P. V. Ramesh, chairman and managing director, REC, spoke about the company’s performance and growth strategies, the progress of key government schemes, and the outlook for the power sector. Excerpts…

How do you rate the performance of the power sector in the past year?

The power sector has been undergoing a transformational change over the past three years on account of a series of reform and policy measures implemented by the government, as well as a surge in investment, rising consumption and the strong focus on village and household electrification. As on March 31, 2017, the country’s installed generation capacity stood at 326.8 GW, with a yearly addition of 24.8 GW, that is, an 8 per cent growth year on year. From a scenario of power shortages and lack of quality supply, India now has surplus power available in real time on the power exchange at affordable rates. Further, the distribution scenario is improving rapidly, with the benefits of reform programmes like UDAY starting to show results. On the renewable energy front, the country’s orientation to become a low-carbon economy is also evident with the cost of solar and wind power falling to record lows.

What were REC’s key accomplishments over the past year?

During 2016-17, REC posted its best results ever, with all-time high sanctions and disbursements of Rs 838.71 billion and Rs 580.39 billion respectively, as compared to Rs 654.71 billion and Rs 460.26 billion in the previous financial year. In addition, Government of India grants of Rs 80.37 billion were disbursed to the states under the DDUGJY during 2016-17. REC also generated the highest ever net profit of Rs 62.46 billion for 2016-17. REC is among the financial institutions with the lowest non-performing assets (NPAs) in the country with gross NPAs of 2.41 per cent and net NPAs of 1.62 per cent as on March 31, 2017.

REC’s stock has performed exceptionally well in the past year and has been included in Nifty Next 50 stocks. Further, REC has recently become the first Indian financial institution to successfully list its green bond on the London Stock Exchange. The money raised will be used for renewable energy financing.

How has the DDUGJY progressed so far? What is the strategy being implemented to fast-track village electrification?

The honourable prime minister, in his address on the 69th Independence Day, pledged that all the unelectrified villages would be electrified within 1,000 days with the help of state and local bodies. Accordingly, the Ministry of Power (MoP), along with REC, the nodal agency overseeing the DDUGJY, took up village electrification in mission mode. On April 1, 2015, there were 18,452 unelectrified villages in the country. Since then, various measures have been taken for expediting the electrification of these villages. These include the development of a dedicated web portal (www.garv.gov.in), the deployment of engineers at the field level to monitor, uploade/update field conditions on the web portal, monthly intensive reviews by the MoP with the states/ discoms, and the nomination of nodal officers at the state level by the MoP and REC. Further, REC’s state officers coordinate with all the stakeholders to accelerate village electrification through daily reviews and monitoring. Moreover, wherever conventional grid connectivity is not feasible, villages are being electrified through off-grid solutions.

As of September 2017, 14,416 villages have been electrified and 987 villages have been found to be uninhabited, leaving 3,049 villages to be electrified (Arunachal Pradesh 1,180, Assam 365, Odisha 363, Jharkhand 349, Chhattisgarh 246, Bihar 212, others 389). The electrification of the remaining villages is fraught with challenges as these are located in far-flung areas with hilly terrain or are left wing extremism-affected and forest areas. These villages are planned to be electrified through off-grid solutions. States/Discoms are making efforts to electrify all the unelectrified villages by May 2018, and the MoP and REC are monitoring the progress closely.

What is your assessment of the impact of UDAY on discom finances and on your company?

Till date, 26 states and one union territory have joined the scheme, which covers almost 95 per cent of discom debt as on September 30, 2015. Sixteen states have opted for financial restructuring, wherein the states have agreed to take over Rs 2,080 billion of discom debt. Discoms have also issued bonds of approximately Rs 240 billion. The interest savings to the discoms due to the state takeover and conversion of loans into discom bonds have been to the tune of Rs 150 billion till March 31, 2017 (that is, 12 paise per kWh). UDAY has, therefore, been a catalyst in improving the financial health of the distribution companies. It has also been a positive step for REC’s business. Distribution utilities are important customers of REC. REC’s fortunes are linked to the financial and operational health of these discoms in a significant way. Thus, a scheme like UDAY, which seeks to bring fundamental and long-term improvements in the health of discoms, is always very welcome as far as REC is concerned.

It is usually said that banks/FIs have lost out due to UDAY prepayments. I would like to say here that the unsustainable debt and accumulated losses of discoms, if allowed to increase further, would have put the loan assets of banks and FIs under the risk of NPAs. If anything, UDAY has ensured that banks have secured their capital while the discoms have found a sustainable solution to their burgeoning losses/debt. Seen in this context, UDAY has indeed been a win-win situation for all stakeholders. Further, financially strong discoms would definitely be in a better position to take on system improvements and expansion works, and the business prospects of companies like REC definitely improve.

What is the company’s growth strategy for the next two to three years?

REC offers a wide range of products to finance the needs of the power sector across the value chain. REC has a strong foothold in its existing area of operations and is poised to enter new areas of business. Accordingly, we are exploring avenues for diversification, such as financing power equipment manufacturing, debt syndication, fee-based project appraisal for other FIs, lines of credit for large renewable energy projects and for manufacturers of electric vehicles, storage and charging infrastructure, etc. Amongst the power sector components, renewable energy will be a key focus area for REC over the next few years, in keeping with the government’s ambitious thrust on developing this segment. REC’s renewable energy portfolio has been growing in terms of both quantity and quality.

What are some of the challenges facing REC and how do you plan to address these?

There are certain challenges in the form of rising NPAs in the power sector, absence of big-ticket power projects, tough competition from banks, challenges pertaining to the interest rate regime and slow growth in the manufacturing sector in general. Power projects also face issues relating to promoters’ equity constraints, PPA challenges, longer time horizon and dynamic policy environment. However, we are aware of these challenges, and are making consistent and serious efforts to manage stressed assets, raise resources at low cost and ensure deployment of these resources in avenues offering the best returns.

What is REC’s outlook for the power sector in the near term?

The outlook for the power sector appears to be very positive. With the likelihood of enormous capital expenditure and the development of equally huge operational infrastructure, REC is looking at an optimistic business scenario in the near future as well as in the longer term. The government’s proactive push to address and resolve the sector’s challenges is strengthening this promising outlook. REC is well equipped to meet the market’s demands and is poised to play a vibrant role in the economic development of the country.