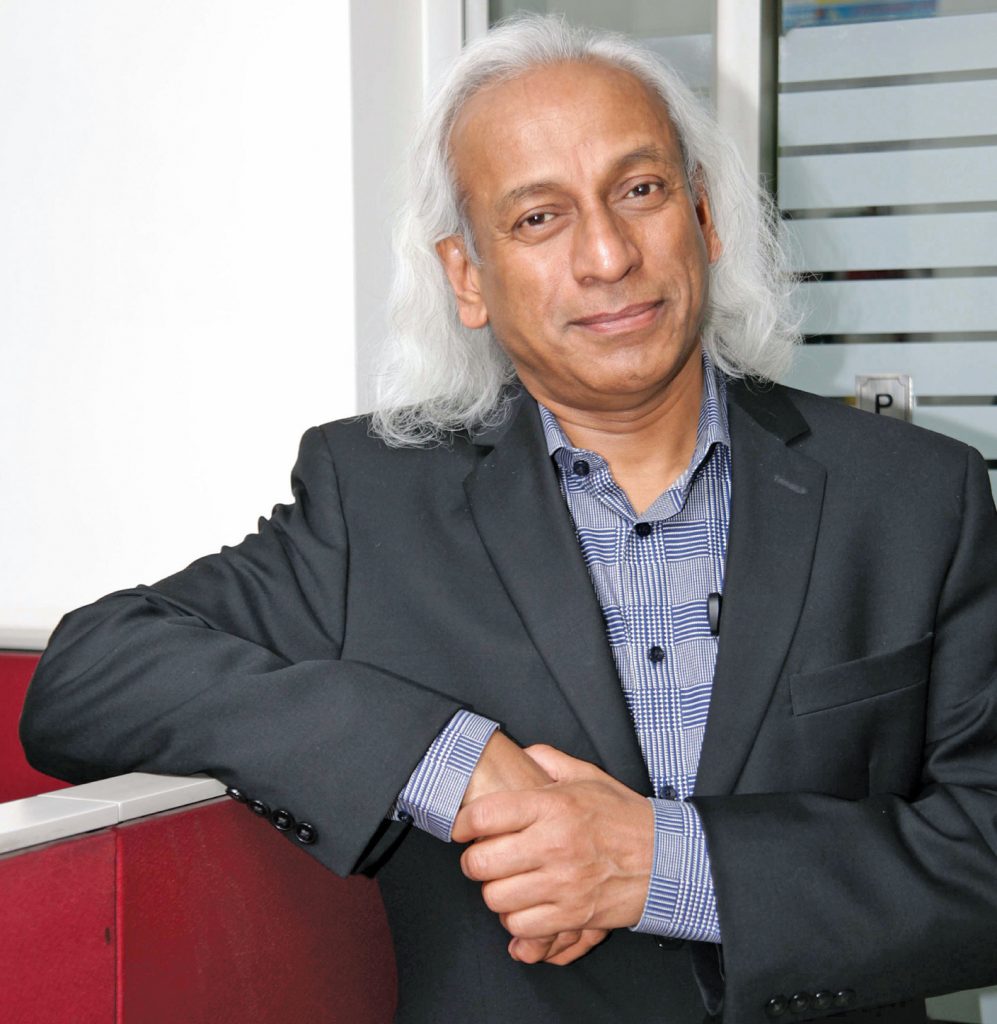 Working in the office of the India Smart Grid Forum (ISGF) in Malcha Marg, the tranquil, wide avenue lined with trees in the diplomatic enclave of New Delhi, is about as quiet and safe a job as Reji Kumar Pillai has ever had.

It’s not that the work at ISGF isn’t exciting. It is hugely exciting. The Forum is a think tank that is advising the Ministry of Power, the regulators and utilities on how to accelerate the development of smart grid technologies in the power sector. Its mandate is to advise the government on policies and programmes for promoting smart grids, work with national and international agencies to develop standards, and help utilities, regulators and the industry in technology selection, training and capacity building.

That’s a hugely demanding and challenging job. But it can be deemed to be relatively “safe” because Pillai has for long periods of his career worked in dangerous conflict zones in Africa, Afghanistan and, in India, in the trouble states of Assam, Punjab and Jammu & Kashmir, where he was locked up in a room by armed militants who stole the wages he had come to hand out. But more of that later.

At present, Pillai, as president of the ISGF, is using his expertise, to spearhead a mission to leverage technology to transform the electric grid in India and light every home at an affordable cost through sustainable developmental models. Last year, Pillai was unanimously elected chairman of the Global Smart Grid Federation (GSGF), an umbrella organisation of smart grid associations from various countries. “It is a great honour for India to chair a global technology forum,” he says.

Pillai played a pivotal role in formulating the Smart Grid Vision and Roadmap for India in 2013, in the launch of a National Smart Grid Mission in 2015, in formulating the Model Smart Grid Regulations, and in helping the Bureau of Standards draw up standards for smart meters. “The Smart Grid Vision and Roadmap for India is a very important policy document because, for the first time, the government said it will provide lifeline supply of electricity – not just connections where a wire is connected but it means nothing – for six to eight hours to all customers during the evening hours,” he says.

The ISGF’s contribution to early adoption of net metering policy in 2013 was also important. All 29 states now have net metering policies, which mean that, in theory, every electricity consumer in India can be a “prosumer” (a consumer of electricity who also produces it and can sell it back to the grid, often through a rooftop solar system)  also – something that many developed countries have not yet enabled.

The ISGF is currently carrying out research on Wi-Fi as a last mile connectivity solution for smart metering, smart grids as anchor infrastructure for smart cities, the future of transportation, and electric vehicle charging infrastructure standards for India and application of Blockchain technology for the electricity sector.

“Our attempt is to bring the experience and technology of countries that have already invested in smart grids to India, particularly that of the US, Europe, Japan and South Korea. All of them embarked on the smart grid journey and executed large projects covering millions of customers. Some have been successful and some less so. A number of delegations have visited India for smart grid workshops where experts, utility officials and policymakers interact so that they can learn from the international experience to plan projects in India,” he says.

Some countries have conducted technology demonstration projects in India facilitated by the ISGF. For example, a pilot project in Panipat, involving 11,000 customers and using Japanese technology and funding, has gone smoothly. The project has included smart metering, SCADA, outage management and peak load management systems.

On the policy side, Pillai says the biggest stumbling block, as everyone in the power sector knows, is the distribution utilities. “The main problem is that the top management of the discoms at the state level changes very frequently, making it impossible to turn them around. Their financial losses are mounting and they are constrained to go in for load shedding rather than buy electricity at a higher cost and sell at lower tariffs. Policy paralysis is keeping tariffs artificially low, leading to load shedding and customers using DG sets, inverters and kerosene lamps, which are much more expensive than the true cost of electricity from the grid. The situation isn’t sustainable,” he says.

Fortunately, Pillai adds, in states where there is continuity of leadership, such as Gujarat, Andhra Pradesh, West Bengal, Madhya Pradesh and Maharashtra, improvements have happened. “However, if, at the end of the day, the objective is to give 24×7 quality electricity to all citizens all day, we are not near that.”

It is a pity, he says, that India efficiently manages the largest and most complex grid in the world with 250 million customers spread over 3 million square kilometres and growing at 8 per cent per annum. It also has a modern and well-run transmission system that is moving towards the highest voltage in the world, ahead of some rich countries. But distribution? That’s where all the problems are concentrated.

Pillai had the kind of pastoral childhood, spent in the lap of Kerala’s abundant nature, that is disappearing these days. His parents had a large tract of farmland in Pathanapuram village, two hours from Thiruvananthapuram. But there was no electricity. “After school, the first thing we had to do before going to swim in the river was pick up the kerosene oil lamps, clean them, refill them, and insert fresh wicks so that at night we could study by their light. It strained our eyes. When I was in Class 7, we got electricity.”

After graduating in mechanical engineering, he joined NTPC in Delhi as a trainee engineer in 1981, working in project management. After six years, he left to set up his own transmission construction company. Based in Delhi, he handled projects all over India, including Punjab at the height of the Khalistan separatist militancy, Assam at the height of the ULFA agitation, and Jammu & Kashmir in the early years of the armed insurgency.

When he shut down the company eventually, it wasn’t because of this risk to life and limb. Not that he settled for a quiet desk job after this. Pillai started working as a part-time consultant on various international assignments, which took him to countries wracked by violence – Nigeria, the Ivory Coast and Kabul in the days after the American invasion that overthrew the Taliban. “Kabul was very difficult. After four months, I left. The daytime temperature used to be -5. At night, it was -18. There was no electricity most nights, never mind heating.”

How did he keep warm? “Vodka,” he smiles. “Only vodka helped. Vodka is the only liquid that doesn’t freeze even at -40 temperatures.”

After a short spell with IBM, he came to head the ISGF in 2011 in what is an honorary post. A team of 12-14 people work with him. The ISGF gets no funding from government. It outsources a lot of its work. Much of its first level of research is done by high caliber interns from good colleges.

Pillai is not clear what he will do when his tenure ends in 2019, but one thing is clear: the technology that will change the face of the world is his passion. The topic comes up during the interview when he is asked what book he is currently reading. It is Homo Deus: A Brief History of Tomorrow by Israeli author, Yuval Noah Harari, who also wrote Homo Sapiens.

His excitement about the future, about the next revolution in human history in which he says existing business models are not going to suffer mere “disruption” but “total destruction” is infectious. “Our world will change totally, just as it did after the first printing press, after the first steam engine, after the first car and after the internet. The next phase of transportation will be aerial – flying cars, passenger drones, hover bikes, etc.,” he says. Blockchain technology, which is today in its infancy like the internet was 25 years ago, will soon destroy several businesses – all transactions will be peer to peer and all aggregators and middlemen will disappear.

“Last year, a Japanese novel written by Artificial Intelligence passed the first round of screening and was shortlisted for a prestigious literary award. A hotel in Japan is already operated entirely by robots speaking several languages,” he says.

The interviewer at this point looks nervous about the alien and weird future that Pillai is outlining, but the latter isn’t afraid of this bold new world and believes no one else should be. Jobs will be an issue, he admits, but since every previous revolution in human history has created new jobs, maybe there is nothing to worry about. “Parliament should be talking about these issues instead of wasting time on petty matters. We should be talking about how we are going to regulate the traffic when it moves from the roads to the air. What are the policy changes we need to facilitate and support this change? But I don’t see any public discourse on it,” he says.

The interviewer feels a distinct shudder as the conversation becomes surreal, that is, the year 2035-2040, when it is predicted that we will achieve “singularity”, the word for when machines will gain the same intelligence as humans.

Not Pillai. He becomes even more energised. In fact, he thinks “singularity” will happen earlier than 2030. “I am passionate about technology and how it can change lives,” he says.