The key driver for the adoption of new technologies in India is the creation of a single, reliable and resilient grid. The national grid, a large, meshed synchronous transmission network, comprises regional and state grids that operate at a single frequency.

Even before the process of creating a single unified grid started, high voltage direct current (HVDC) technology was enabling the transfer of power between regional grids via asynchronous back-to-back (BTB) links. During the 1980s-90s, when the country’s five regional grids were functioning independently on five different frequencies, India’s first HVDC station, the 500 MW BTB Vindhyachal station, commissioned by ABB, dramatically increased the flexibility of the Indian grid by permitting power flow between regions, and consequently optimised generation to meet load variations.

Since then, HVDC has continued to play an indispensable role in India’s grid by enabling controlled power exchange between regions, improving the stability of the alternating current (AC) system, and minimising power reduction during outages. Further, as the peak load grows exponentially and large-scale renewable energy is added to the country’s grid, the deployment of HVDC will become even more crucial in the future in order to provide greater flexibility and create a more dynamic and robust grid.

Evolution of HVDC in India

HVDC technology has the ability to transfer bulk power over large distances with lower losses and a smaller footprint as compared to AC technology. For longer distances, the losses in AC transmission are significantly higher than in DC systems.

In India, HVDC technology has not only facilitated the creation of linkages between regional grids and is connecting remote renewables to busy consumption centres, but has also contributed to the establishment of the South Asian Association for Regional Cooperation (SAARC) grid.

Several ±500 kV HVDC lines were developed during the 1990s and 2000s to create transmission corridors for the transfer of power from generation clusters (hydropower in the northeast and northern regions, and coal-based power in the eastern and western regions) to concentrated power demand pockets in the northern, western and southern regions.

The country’s first ±800 kV and the world’s first multi-terminal HVDC project – the North-East Agra ultra HVDC (UHVDC) link – was operationalised in November 2015, with the completion of Pole 1 aggregating 1,500 MW. The project with enable the transfer of 6,000 MW from India’s north-eastern region to the northern region. The country’s second ±800 kV project, the 6,000 MW Champa-Kurukshetra line – is operational with 3,000 MW capacity. 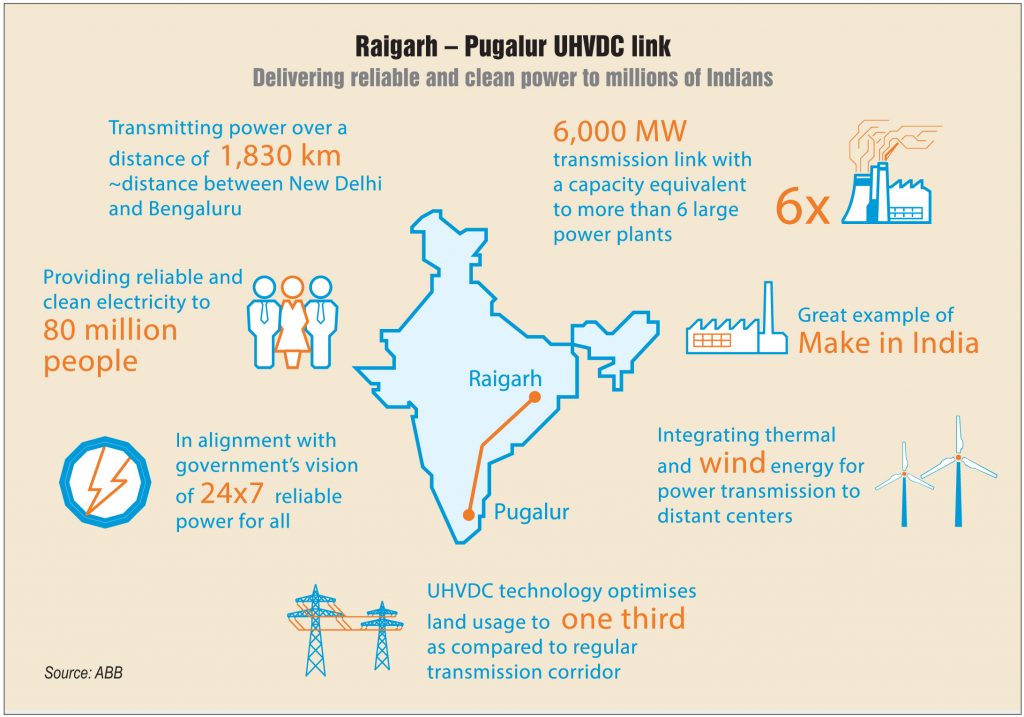 India’s third ±800 kV project – the 6,000 MW Raigarh-Pugalur-Trichur project. The 800 kV Raigarh-Pugalur UHVDC system, connecting Raigarh (Chattisgarh) in central India and Pugalur in the southern state of Tamil Nadu, is currently under development by the Power Grid Corporation of India. The project is being executed by ABB, along with its consortium partner, Bharat Heavy Electricals Limited and is expected to be completed in 2019.

Once commissioned, the 1,830 km link will be among the longest in the world. With a capacity of 6,000 MW – the equivalent of more than six large power plants – it will be enough to meet the electricity needs of over 80 million people in India. The two-way link will integrate thermal and wind energy for transmission of power to high consumption centres located thousands of kilometres away, supporting electricity demands in the south, when wind strength is low, and transmitting clean energy to the north, when there is excess wind power.

HVDC transmission links help to conserve land as they occupy only one-third of the space compared to the alternative. In this case, that amounts to a saving of approximately 244 square kms of space – around one-third the area of Bengaluru. The mega project will also feature technologies selected to minimise the footprint of the transmission stations.

HVDC is also contributing towards the creation of the SAARC grid. The 1×500 MW HVDC BTB India-Bangladesh interconnector has been operational since September 2013, while the second 1×500 MW HVDC BTB converter unit is under way. After its completion in June 2018, the link’s capacity will increase to 1,000 MW. To further enhance power trade with Bangladesh, an AC interconnection from the Northeast and eastern part of India to Bangladesh has been proposed along with a 500/1,000 MW HVDC BTB terminal in Bangladesh. In addition, an HVDC connection between Madurai in India and Anuradhapura in Sri Lanka, through the Palk Strait, is under consideration. 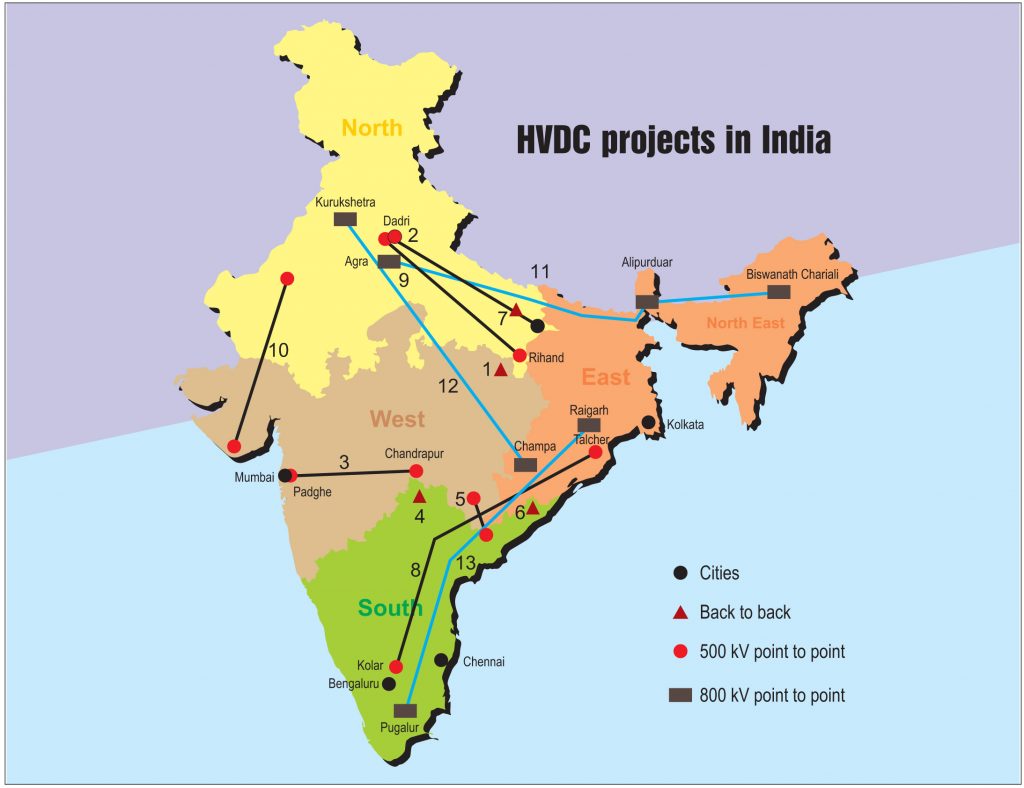 Recent technological advancements have positioned India as a major technology hub, with the key global equipment suppliers keen to establish a strong foothold in the country’s transmission equipment market. Backed by a strong manufacturing base, a diverse product portfolio and extensive global experience, equipment suppliers are not only going to meet India’s new technology demand, but are looking to tap opportunities in other South Asian countries as well.

The major HVDC players are ABB, which pioneered this technology, GE and Siemens. ABB, in partnership with Bharat Heavy Electricals Limited (BHEL), recently won a turnkey contract for the 800 kV Raigarh-Pugalur project. The ABB-BHEL consortium is also executing the North-East Agra multi-terminal link. ABB, which has over 60 years of global experience and a portfolio of more than 100 HVDC links, was also associated with the country’s first HVDC project, the Vindhyachal BTB project. GE T&D India Limited (erstwhile Alstom T&D India Limited) is executing HVDC converter terminals for the 800 kV Champa-Kurukshetra project, besides having built the HVDC BTB systems at Vizag, Chandrapur and Sasaram. Meanwhile, Siemens along with Sumitomo Electric Industries Limited is executing the 320 kV Pugalur-Trichur HVDC system.

HVDC is expected to play an important role in the country’s changing energy scenario as it provides system stability, prevents cascading grid disturbances and allows greater control over the power flow. Given the growing grid complexity and load, and the increasing need for integrating large-scale renewable energy, creating smart grids and boosting power trade in the SAARC region, HVDC is imperative for the country’s future energy system.