Globally, there are over 200 high voltage direct current (HVDC) systems installed across continents, since the world’s first commercial HVDC link was commissioned by ABB in 1954. The ever increasing pace of HVDC deployment has been spurred by the successful grid operation experience, rapid development of power electronics performance and a growing demand for renewable energy generated electricity.

HVDC links are being increasingly deployed to connect regions, countries and even continents, enabling power trading, balancing loads and maximising the use of renewables. Transmission distance can vary from about 100 km to more than 3,000 km and as short as “back-to-back”, where the transmission distance is only a few metres, but still interconnects two non-synchronised power grids. Kriegers Flak is a good example of this kind of interconnection, enabling the integration of wind to the Danish and German grids.

The main advantage with HVDC interconnectors is transmission loss reduction; an HVDC system can reduce transmission losses by around 50 per cent compared to high voltage alternating current (HVAC). HVDC is the only viable method to transport a large amount of electricity in a cable system, to overcome the challenge of capacitive charging of the insulation caused by alternating current operation, which consequently leads to large losses of active power in long distance HVAC cable systems. This means that the amount of power being transmitted by HVDC links has been rising constantly.

An example is the ±1,100 kV Changji–Guquan ultra high voltage direct current (UHVDC) project in China. Once the construction is completed in 2019, it will carry more than 12,000 MW of power in one set of power towers. That is equal to approximately 12 large power plants or close to 2,000 large-scale wind turbines.

India also has an impressive HVDC track record, where ABB introduced the technology over 25 years ago, and has demonstrated its ongoing commitment to deploying this technology. With many gigawatts of potential hydropower in the northeast and wind power in the south, the need to transmit and balance these renewables and, therefore, the need for HVDC is growing. Following the ±800 kV multi-terminal the Northeast-Agra UHVDC link, there are three significant under-construction projects: the ±800 kV Raigarh-Pugalur, Champa-Kurukshetra lines, and the ±320 kV Pugalur–north Trichur line.

The development of HVDC Light by ABB in the 1990s led to the introduction of voltage sourced converters (VSCs) that can control the AC grid. This made it possible to support and even start-up weak grids in case of outages. Today, these converters are dominating new projects under construction in Europe. They are also being deployed to connect remote offshore wind. For instance, the DolWin1 and DolWin2 links connect 1,700 MW of wind power from the North Sea to the German mainland grid. Two major 1,400 MW VSC-HVDC interconnectors are under construction: the Norway-Germany ‘Nord-Link’ and the Norway-UK ‘North Sea Link’. Both of these links will be used to trade wind power (generated in Germany and the UK) with abundant, large-scale hydropower generated in Norway. The nature of HVDC makes it possible to operate and adapt power flows in real time with today’s advanced control systems.

The 20th anniversary of HVDC Light in 2017 marks the next chapter in the development of VSC technology, facilitating more interconnections and greater integration of renewables. The latest generation of HVDC Light offers more than double existing power capacity (to over 3,000 MW) and, by enhancing voltage levels further to 640 kV, also doubles the distance capability to 2,000 km, without compromising on losses. The solution is also much more compact – delivering more power per square metre – a huge benefit in applications like offshore wind transmission, city centre in-feeds or interconnections. The latest ABB ability-based MACH control and protection system provides greater efficiency and reliability.

While energy storage is a good method to bridge gaps between renewable generation and local loads, transmission is significantly cheaper. It brings further advantages such as grid resilience and trade of electricity to reach healthy price levels, avoids excessive construction and enables renewable power plants to be constructed at sites with the best conditions for solar and wind. HVDC interconnectors will increasingly be one of the most valuable tools for grid operators to build greener, stronger and smarter grid, today and tomorrow.

There are several drivers for deploying HVDC systems as discussed above. In the following section, four applications related to connecting offshore wind, remote generation, regional grids and cross-border grids are discussed in detail. 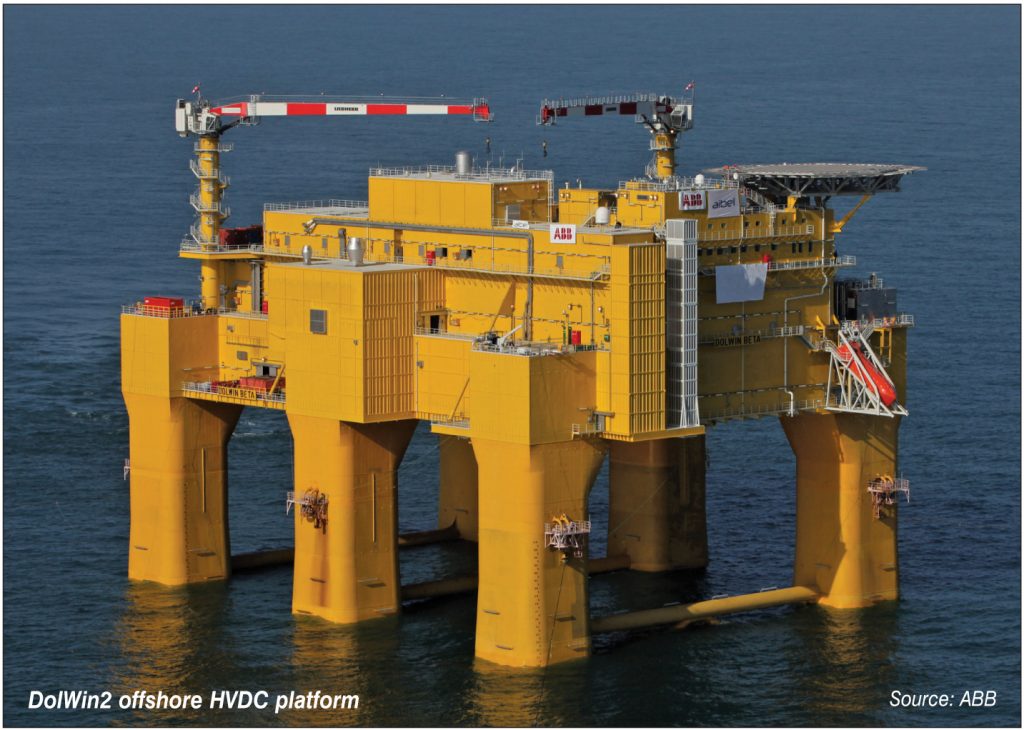 The DolWin2 offshore wind transmission link, owned by the Dutch-German transmission system operator TenneT, was commissioned successfully by ABB earlier in 2017. DolWin beta is the world’s most powerful offshore converter station in the North Sea. The ±320 kV converter station, housed on an offshore platform, has a 916 MW power transmission capacity, enough to power around 1 million households with clean energy.

The offshore wind farms are connected with AC cables to an HVDC converter station installed on an offshore platform in the North Sea. The power they generate is transmitted through a 45-km long DC sea cable system and a further 90-km long land (underground) cable to an HVDC onshore station at the grid connection point of Dörpen West.

The HVDC Light system that is used provides numerous environmental benefits, such as electrical losses of less than 1 per cent per converter station, neutral electromagnetic fields and compact converter stations. HVDC Light technology is ideal for connecting remote wind farms to mainland networks without distance limitations or constraints on the grid.

In 2010, ABB commissioned the ±800 kV Xiangjiaba-Shanghai link, which was at that time the world’s most powerful and longest UHVDC link. Overhead line length at 1,980 km makes Xiangjiaba-Shanghai one of the longest overhead transmission links in the world, surpassed only by the Rio Madeira HVDC in Brazil, which is about 2,400 km long. The State Grid Corporation of China (SGCC) is the owner of the link and ABB the main technology supplier. The project was completed one year ahead of schedule. 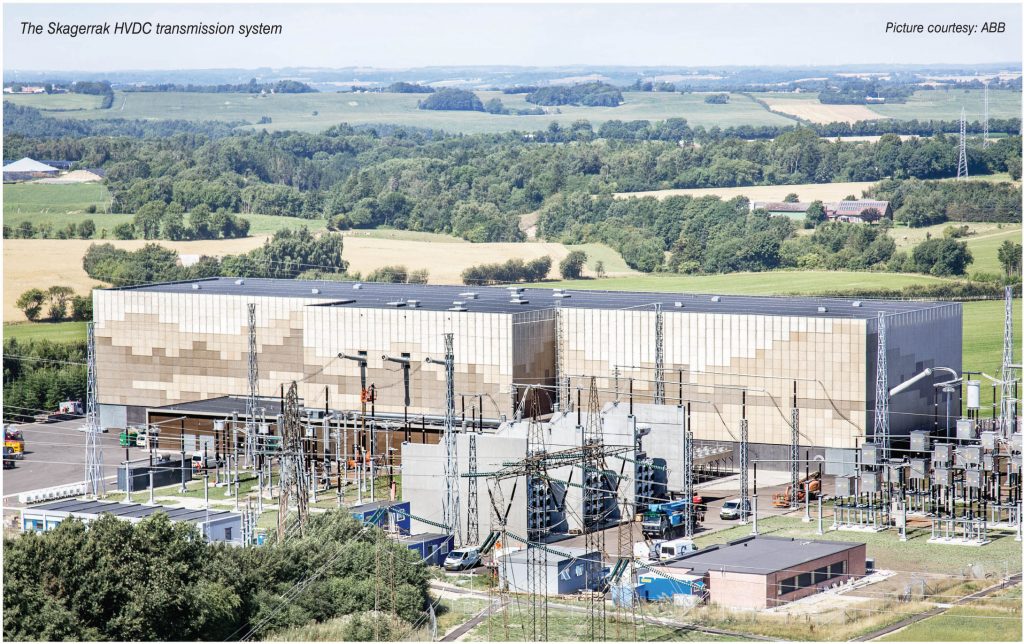 The link, with a rated power of 6,400 MW, has the capacity to transmit up to 7,200 MW of power from the Xiangjiaba hydropower plant, located in the southwest of the country, to Shanghai, China’s leading industrial and commercial centre, about 2,000 km away.

In this turnkey project, ABB was responsible for the overall system design and supply of the main equipment, including 28 high and ultra high voltage converter transformers, ten from Sweden and the rest manufactured with ABB components and technology in China, with local partnership. Other key products delivered include thyristor valves, DC and AC switchyard equipment and the DCC800 HVDC control system.

The link represents a major breakthrough in the technology of power transmission. System voltage at ±800 kV was 33 per cent higher than the voltage used for the ±600 kV Itaipu transmission line in Brazil. The power rating at 6,400 MW was also record breaking, while losses were reduced to 7 per cent, compared to 10 per cent losses on conventional 500 kV DC transmission lines.

The Skagerrak HVDC transmission system comprises several HVDC links, which together provide a total of 1,700 MW transmission capacity between Kristiansand in southern Norway and Tjele on Denmark’s Jutland peninsula. The link is owned by Statnett in Norway, and Energinet in Denmark.

Skagerrak 1 and 2 rated 500 MW was commissioned in 1976-77 and Skagerrak 3 rated 500 MW became operational in 1993. The latest Skagerrak 4 project was awarded to ABB in 2011, and comprises a fourth link using HVDC Light technology, which operates in a bipole mode together with the Skagerrak 3 HVDC Classic link and a control system upgrade of the latter. This is the first time an HVDC Classic and an HVDC Light link are tied together in such a bipole configuration. This is possible because of ABB’s advanced MACH control system, which was also used for a Skagerrak 1 and 2 upgrade. The new link boosts transmission capacity between the mainly hydroelectric-based Norwegian system and the wind and thermal power-based Danish system by an additional 700 MW, with a voltage rating of ±500 kV. It enables both networks to add more renewable energy to their energy mix, and to use electricity more efficiently.

The system helps overcome distance and grid constraints while ensuring robust performance, power quality and minimal electrical losses. In the rare case of a power system outage, the technology’s black start capability allows for a fast network restoration, using power from the other end of the link. These factors were essential in the selection of the HVDC Light technology for the Skagerrak 4 HVDC link.