India jumped 30 places to reach the 100th rank for the first time in the ease of doing business rankings, as per the World Bank’s Doing Business 2018 report. The annual exercise, which was carried out for 190 countries, recognises India as among the top 10 economies this year in terms of having made the largest strides in improving its business climate.

Notably, of the various indicators such as starting a business, dealing with construction permits and getting credit, that are used to arrive at the rankings, India has been a star performer on the “Getting Electricity” indicator. Its rank on this indicator was 29 in this year’s edition of the report. In 2015, the rank had been a dismal 99th. While the 2018 ranking is no doubt a few notches lower as compared to 2017 when it was ranked 26th, it has managed to retain its position within the top 30. More importantly, India’s distance to frontier (DTF) score, which measures the gap between India and global best practices, has improved consistently year after year. As the World Bank notes, “Getting electricity is an area where the country continues to perform well.”

Observers say that the positive performance is reflective of the various regulatory and administrative easing measures and initiatives taken by the discoms of Delhi Tata Power Delhi Distribution Limited (TPDDL) and Mumbai (Reliance Utilities), which have made electricity availability a less cumbersome process for users now as compared to earlier.

In Mumbai, it takes slightly longer, with the same number of steps, 47 days to get a connection, but it is still far better than the 136 days that it takes in South Asia. It takes just five procedures in Delhi and Mumbai to obtain an electricity connection, compared to 5.7 in South Asia and 4.7 in OECD high-income countries.

Both cities have also improved their rankings on the reliability of supply and transparency of tariff index. Both Reliance Utilities and TPDDL have been rated 7 on the index compared to 5.5 in 2016 when this measure was first introduced by the World Bank. (The index ranges from 0 to 8, with higher values indicating greater reliability of electricity supply and greater transparency of tariffs.) 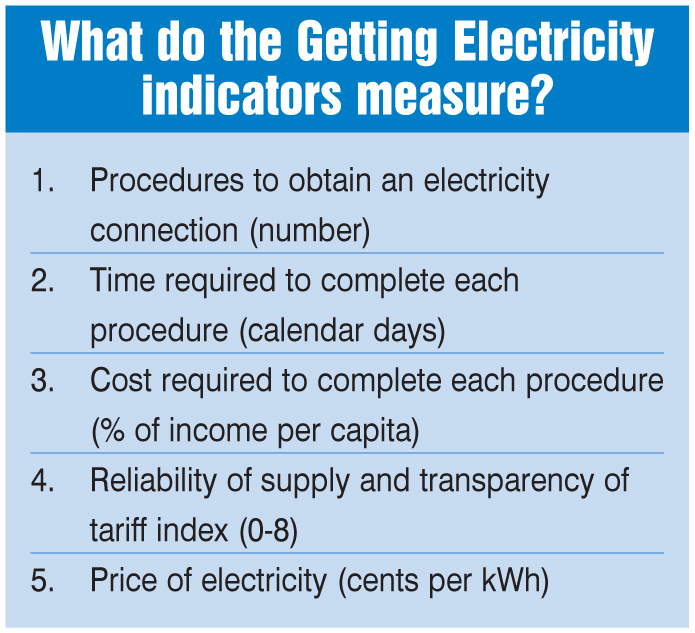 The report uses the System Average Interruption Duration Index (SAIDI) and the System Average Interruption Frequency Index (SAIFI) to measure the duration and frequency of power outages. For Delhi, the SAIDI and SAIFI values are 2.9 and 2.7 respectively, equivalent to an outage of one hour per quarter of the year. For Mumbai, the SAIDI and SAIFI scores are even better at 0.9 and 1.6 respectively, equivalent to an outage of one hour per year. The report also assigns scores to utilities to monitor power outages. A score of 1 is assigned if the utility uses automated tools, such as an outage/incident management system (OMS/IMS) or supervisory control and data acquisition (SCADA) system; 0 if it relies solely on calls from customers, and records and monitors outages manually. Both Mumbai and Delhi have SCADA systems in place for automatic restoration of power supply and thus, for Delhi and Mumbai, the scores were 1 on this parameter.

In 2015 and 2016, the report notes that TPDDL streamlined the connection process for new commercial electricity connections by allowing consumers to obtain connections for 200 kW capacity to low-tension (LT) networks. This reform led to the simplification of the commercial electricity connection process. It eliminated the need to purchase and install a distribution transformer and related connection material, as the connection is now made directly to the distribution network, leading to a reduction in cost. Second, the time required to conduct external connection works by the utility has been greatly reduced. This has reduced not just the time but also the cost from 846 per cent of income per capita to 187 per cent in 2017 and 166 per cent in 2018.

The documentation requirements are also far less now. Applications can be made online with no need for physical documents to be filed. Besides the initiatives undertaken by the utilities and reforms for easing several administrative procedures have also helped. Notable amongst these was the notification to waive electrical inspector approval for 11 kV installations carried out by discoms, which was issued by the Central Electricity Authority (CEA) and the Ministry of Power. The process was earlier quite time-consuming. With the waiver, discoms can now do self-certification for such cases. Further, the rationalisation of LT and high tension tariffs in Delhi and Maharashtra has helped bring down the cost of electricity. Also, the state regulatory commissions in Delhi and Maharashtra have made it mandatory to apply for electricity connections above 100 kVA load online. Further, the CEA regulations have been amended for allowing the installation of transformers up to 500 kVA on double-pole structures. 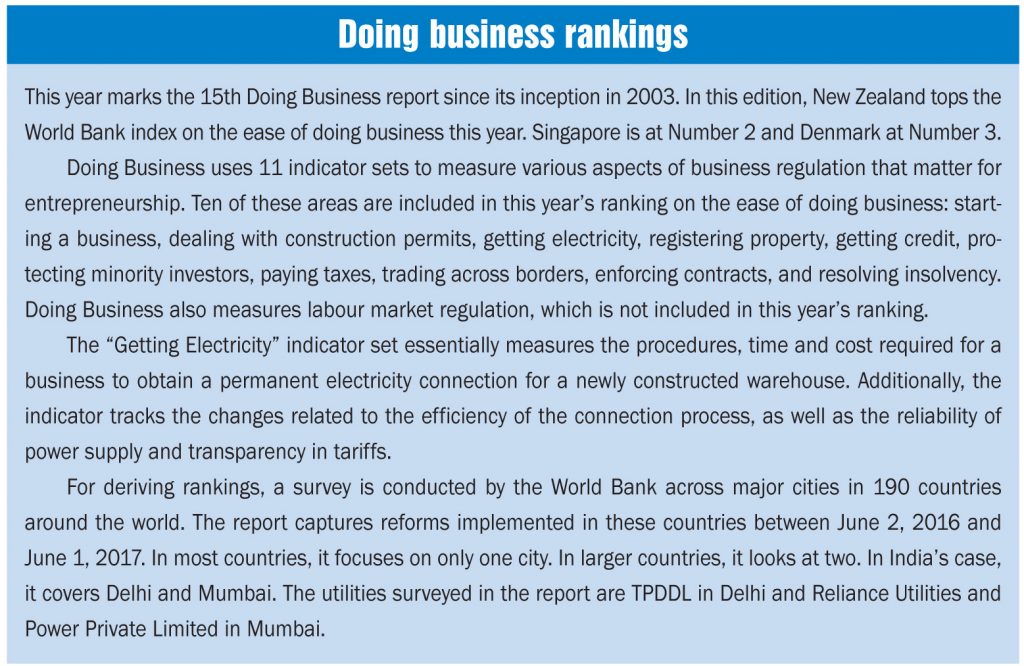 While the rankings are certainly a shot in the arm for the power sector, experts say that they are not fully representative of the sector. One of the key criticisms of this exercise, experts point out, is that it considers a ground position of only two cities. Moreover, only two private discoms have been surveyed in a sector that is run largely by state-owned companies. There are a number of other ground realities and issues that the sector is grappling with, which have been overlooked by the rankings.

While the power sector has achieved a remarkable turnaround, clearly, a lot more needs to be done to maintain the reforms momentum.