Coal-based generation continues to be the mainstay of the country’s power sector. In the past one to two years, the domestic coal supply scenario has improved significantly with Coal India Limited (CIL) significantly ramping up its production. However, recently, power plants have been facing shortages in coal availability. Although coal despatches from mines have been increased, shortages continue to pose challenges in power plant operations.

Apart from this, the coal sector has witnessed a host of reforms in recent years. In a major move for allocation of coal to consumers, the government launched a new, auction-based coal linkage policy, SHAKTI (Scheme for Harnessing and Allocating Koyala [Coal] Transparently in India), in May 2017.

In the past couple of months, coal stocks at thermal power plants (TPPs) have witnessed a declining trend. The lack of proper planning and improper logistics coordination led to a build-up of non-evacuated coal at the mines, eventually resulting in shortages at the plants. In fact, during the summer months of 2017, the coal stock pile-up at CIL’s pitheads posed a risk of flash fires in the summer heat. In the months of August and September 2017, there was a steep decline in hydro and nuclear power production, putting an additional burden on thermal power generation. Meanwhile, heavy rains adversely affected CIL’s coal production.

As of November 19, 2017, the coal stock position of coal-based power plants stood at about 8.74 million tonnes (mt), sufficient only to meet the coal requirement for six days. A total of 12 power plants had critical coal stocks (less than seven days), of which 10 plants had supercritical stocks (less than four days). Since coal evacuation from mines is constrained by the availability of the railway capacity in terms of connectivity, rake length (number of wagons) and tonnage per wagon, even with sufficient coal in the mines, it cannot be immediately transported to the generating units. As a result, a few states including Maharashtra and Karnataka had to resort to load shedding. Further, there has been a surge in power prices at the exchanges with the price of power discovered on the exchange recently reaching as high as Rs 7.50 per unit.

During April-October 2017, coal despatches to the power sector stood at 248.9 mt, marking an increase of 9.6 per cent over the corresponding period of the previous year. Coal despatches to the power sector in August, September and October 2017 grew at 17.9 per cent, 16.5 per cent and 16.7 per cent respectively as compared to the same period in the previous year. The increase in coal despatch has been on the back of a decline in coal stocks with the power plants, thus creating a need to augment coal availability at the plants.

Notably, on November 14, 2017, CIL and Indian Railways (IR) recorded the highest ever loading of rakes for the month of November, at 250. Of these, 223 rakes were exclusively for thermal power stations. CIL and IR aim to achieve 266 coal rake loadings per day.

During 2015-16, coal imports stood at 203.95 mt, recording a decline of 6.4 per cent. The trend of decline in coal imports continues in 2017-18 as well. During April-June 2017, 52.74 mt (provisional) of coal was imported as compared to 57.38 mt during the same period in 2016-17, showing a decline of 8.1 per cent. Besides, power utilities imported around 33.62 mt of coal during April-October 2017, down by 16 per cent compared to the same period a year ago. The decline in coal imports has been on account of the increase in domestic coal production. However, imports cannot be eliminated completely given the insufficient domestic coking coal stocks and the fact that some power plants are designed to run on imported coal.

The price of imported coal (mainly from Indonesia, Australia and South Africa) has declined and remained low over the past two to three years. However, there has been a price rise in recent months. Prices have surged on the back of an increase in demand for imported coal by China as well as a reduction in supply from Indonesia and Australia. This has adversely affected Indian power producers as well. The declining trend in demand for imported coal can be attributed to its high price in the international market.

The new auction-based approach is a welcome change from the earlier regime, wherein the Standing Linkage Committee granted linkages. Under SHAKTI, coal linkages will be allotted to public sector generation companies at a notified price based on the recommendations of the Ministry of Power, while independent power producers will be granted linkages through auctions. CIL has already conducted the first auction under the scheme in September 2017. While a total of 31 applications were received by CIL, only 14 were found to be eligible under the scheme and 10 of these companies actually participated in the bid. The discount on the levellised tariff offered by the generation companies ranged from 1 paisa per unit to 4 paise per unit. A total of 27.18 million tonnes per annum (mtpa) of coal has been booked from eight different sources. This allocation is expected to result in an increase in the annual generation of over 47 BUs and savings in tariff of nearly Rs 1.25 billion per annum for a period of 25 years. With more auctions in the future, plants that are currently stressed due to the lack of coal supply are expected to become operational. It will also be a positive development for the financial institutions that have funded such projects. However, bidders need to be cautious and weigh the risk of under-recoveries while bidding. 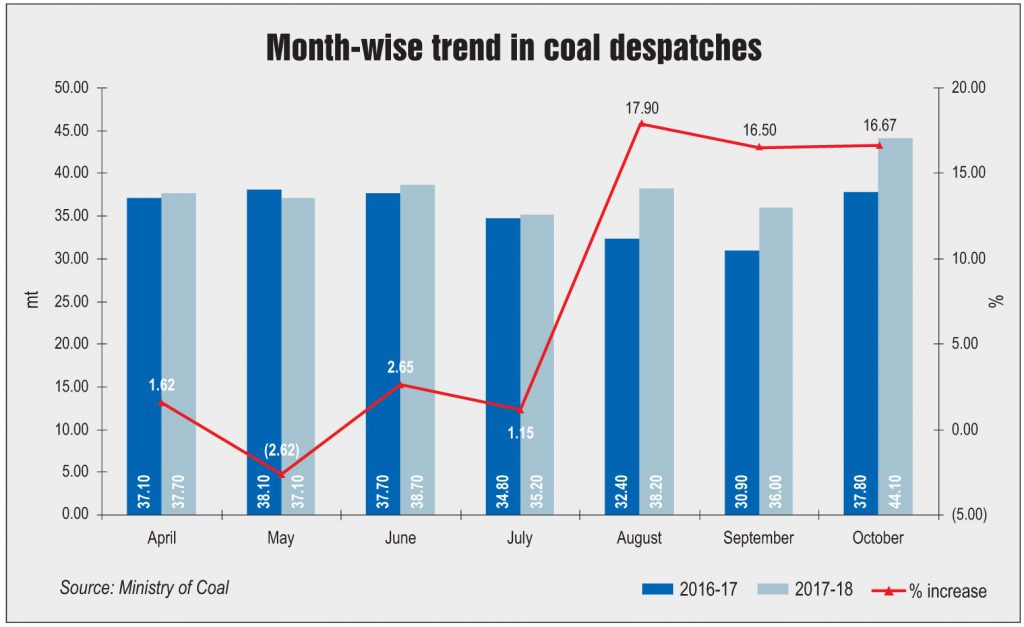 The scheme for the flexible utilisation of coal at power plants, approved by the union cabinet in May 2016, witnessed the first instance of implementation recently with Gujarat State Electricity Corporation Limited (GSECL) issuing a tender for procuring electricity from 1,000 MW of capacity at less than Rs 2.82 per unit. The GMR Group has secured the contract for supplying electricity from 500 MW of capacity at Rs 2.81 per unit.  GSECL has coal allocations from Korba and Korea Rewa coal fields in Chhattisgarh, which will be used by GMR to generate electricity from its power plant in Chhattisgarh. This will save the cost of transporting coal from mines in Chhattisgarh to Gujarat, making power generation cheaper.

Notably, GSECL’s tender for procuring 1,000 MW had witnessed tepid response, with only one company participating in the bidding, with an offer to sell 500 MW of power. Besides, only five developers had participated in the pre-bid meeting for the auctions, which were deferred multiple times expecting larger participation. Reportedly, the poor participation of developers was owing to stringent terms and conditions of the contract and inequitable risk apportionment.

In sum, a number of steps have been taken in the coal sector to ensure the availability of good quality coal at power plants from domestic sources. However, proper planning of coal despatches from the pitheads to the plants, in coordination with IR, is important to ensure that situations such as the recent coal supply shortage at plants do not recur.