Coal-based power continues to hold the highest share in the country’s installed capacity and total generation. However, coal-based power plants in India are currently facing a number of challenges such as declining efficiency levels, low power demand from discoms and a need for substantial capital investment to meet the new environmental norms. Further, the Central Electricity Authority (CEA), in the draft National Electricity Plan 2017-22, stated that the country does not need any more coal-based capacity addition until 2022 other than the capacity already under construction, thus putting the future of coal-based power in doubt.

The generation from coal-based power plants has increased at a CAGR of 8.11 per cent over the past five years, from 691 BUs in 2012-13 to 945 BUs in 2016-17. In the first seven months of 2017-18 (April to October), around 566 BUs of coal-based power has been generated, recording a year-on-year growth of about 5 per cent. While the generation has continued to increase with the overall increase in capacity, the growth has slowed down owing to the declining plant load factors (PLFs) of coal-based plants.

Between 2012-13 and 2016-17, the average PLF in the country declined by 10.3 percentage points, from 69.9 per cent to 59.6 per cent. Sector-wise, the central sector power plants have consistently performed better than the private and state sector plants. In 2016-17, the PLF for the central sector coal-based plants stood at 70.4 per cent, followed by the private sector plants at 55.9 per cent and the state sector at 54.7 per cent. During the current year (as of October 2017), the all-India PLF has been 59.6 per cent. The declining PLF in the country can be attributed to several factors such as growing renewable energy penetration and low power demand from discoms.

In India, coal supply in the power sector has improved significantly over the past couple of years. It increased from 567.6 million tonnes (mt) in 2012-13 to 647.73 mt in 2016-17 (provisional), recording a CAGR of 3.35 per cent. The increase in the supply of coal to thermal power plants (TPPs) during this period has been primarily due to improved coal output by Coal India Limited. However, there has been a slowdown in coal production in the current fiscal, which is also reflected in the coal stock position across power plants in the country. As of November 20, 2017, the total coal stock at power plants was about 8.8 mt, sufficient only to meet coal requirement for six days. A total of 22 power plants had critical coal stock (less than seven days), of which nine plants were facing supercritical stock (less than four days).

Meanwhile, with an overall improvement in domestic coal supplies, coal imports have seen a corresponding decline. Imports have fallen from 203.95 mt in 2015-16 to 190.95 mt in 2016-17, recording a decline of 6.4 per cent. This is because imported coal has been substituted by domestic coal. However, imports cannot be eliminated completely owing to inadequate domestic coking coal stocks and the fact that some power plants are designed to run on imported coal. 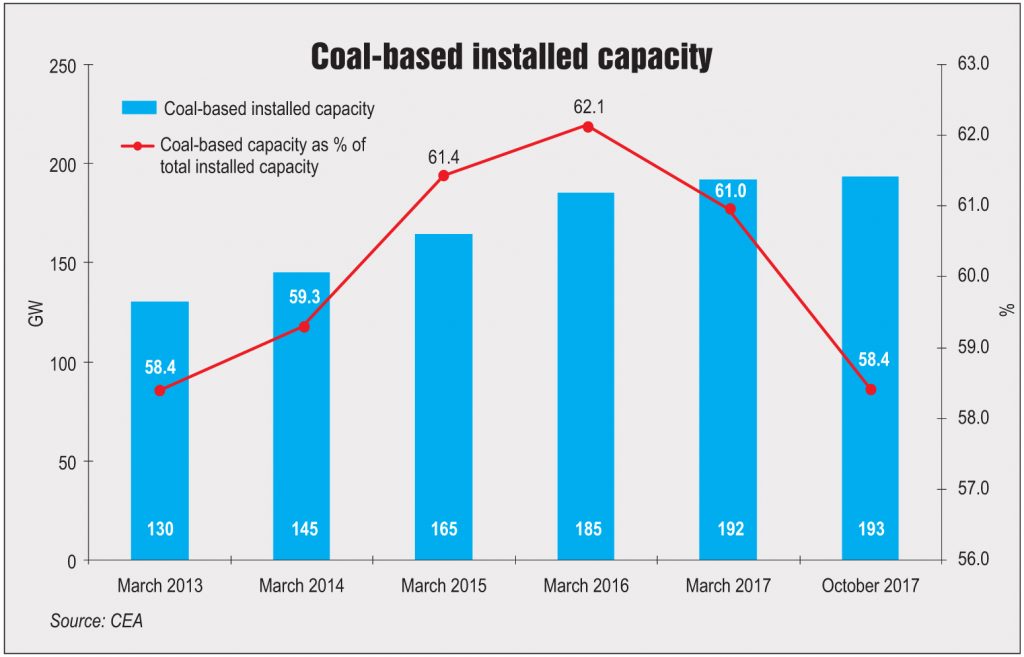 The key issues faced by the coal-based power generation segment include the absence of power purchase agreements (PPAs) and low PLFs. The poor financial health of discoms has significantly compromised their power offtake capabilities. As a result, there is a huge operational and under-construction generation capacity lying without PPAs. Besides, the poor power offtake by discoms is affecting the PLF of TPPs.

The low PLFs can also be attributed to the increasing share of renewable energy in the country’s total power mix. As renewable energy is placed higher on the merit order, coal-based power is frequently backed down and rescheduled, depending on the renewable energy generation. Due to low PLFs, the per unit cost of generation has gone up making TPP operations less profitable. Apart from higher costs, when subjected to cyclic or frequent ramp-up and ramp-down, the plants become less efficient, resulting in higher maintenance requirements and lower equipment lifetime. The problem is likely to aggravate further with large-scale integration of renewable energy in the coming years. Therefore, there is a need to prepare power plants for flexible operations. This means additional capital investment and operations and maintenance (O&M) costs.

Another critical challenge faced by both upcoming and operational power plants is the additional capital expenditure required to comply with the tightened emission and water consumption norms set by the Ministry of Environment, Forest and Climate Change in December 2015. 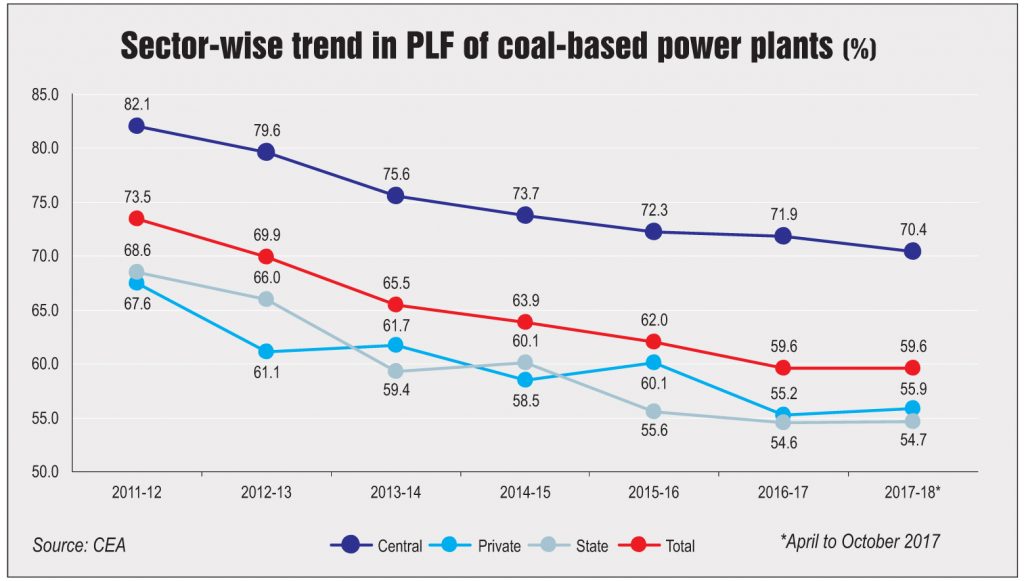 Apart from the coal availability issues observed in recent months, coal quality continues to be a serious cause for concern. Often, discrepancies have been found between the quality of coal billed in the agreement and that delivered at the power plant. To this end, the government is taking a number of steps such as coal sampling and coal washing.

Currently, there are no new projects in the pipeline apart from the plants that are already under construction. The draft National Electricity Plan  has indicated that no new coal-based capacity addition is required. It stated that the coal-based capacity of 50,025 MW that was under construction at the time is likely to meet the capacity requirement for the period 2022-27. Meanwhile, the draft National Energy Policy released by NITI Aayog in June 2017 states that coal-based installed capacity is expected to increase to 330-440 MW by 2040, after considering a transition towards cleaner and sustainable supply options.

That said, even though the share of coal might reduce and its role may change, it is likely to remain an important source of power generation. Coal-based power will be key to balancing the grid, with the increase in intermittent renewable energy generation.

Going ahead, a key trend that is expected to dominate the operations of the existing plants is the shift towards efficient and environment-friendly power generation practices, driven by the policy push towards renewables. Greater emphasis will be laid on new O&M strategies, flexibilisation technologies, energy efficiency, retrofitting, strategies to improve water management, and better coal and ash handling solutions.