Indian power system operators are facing the challenge of rapidly integrating a large quantum of infirm renewable energy under a tight system frequency regime. Even with the best of forecasting and scheduling practices, imbalances are inevitable in real-time operations and in fact play a critical role in ensuring overall system balance, and secure and reliable grid operations. In this context, it is important that the imbalance pricing mechanism is dynamic and captures the market realities. This has been recommended in the second volume of a report prepared by a Central Electricity Regulatory Commission (CERC)-appointed expert group. The report suggests measures for bringing power system operations closer to the national reference frequency of 50 Hz.

The expert group, formed in April 2017, was headed by A.S. Bakshi, member, CERC, along with representatives from the Central Electricity Authority, Power System Operation Corporation of India and Power Grid Corporation of India Limited, which is the central transmission utility. The first volume of the report focuses on reviewing the Indian and global grid operation experience, and the existing operational frequency band in India for safe, secure and reliable system operation. The second volume reviews the principles of deviation settlement mechanism (DSM) pricing including its linkage with the frequency in light of the emerging market realities.

Based on the analysis of prices in the Indian electricity market over the past decade, the report notes that in recent times, the DSM price (formerly known as the unscheduled interchange charge) has been the lowest as compared to the prices prevailing in bilateral contracts, the day-ahead market (DAM) (power exchange discovered price) and the ancillary services market. This could act as an incentive for participants to lean on the grid, which could disrupt grid security.

DSM has been operating as a penalty mechanism. However, with improved system adequacy and parameters, imbalance pricing must be made more dynamic and capture the market realities. Given that DAM prices are discovered closest to the time of delivery, DSM could be linked to DAM. However, other new products must be introduced at the exchanges to ensure better price discovery closer to the time of delivery.

The report concludes that the existing DSM mechanism promotes efficiency and merit order despatch, provides ex ante information to everyone, enables real-time imbalance pricing, diffuses market power, discourages advertent deviations and has the highest priority in the payment settlement process. However, the present design needs to be modified to include five additional features in DSM pricing to capture market realities. These are market-linked price vector, factoring value of the lost load, consideration of interplay of prices in various market segments, capturing the time value of electricity, and geographical location and transmission congestion.

Broadly, the expert group has made six key recommendations with respect to DSM. These are: 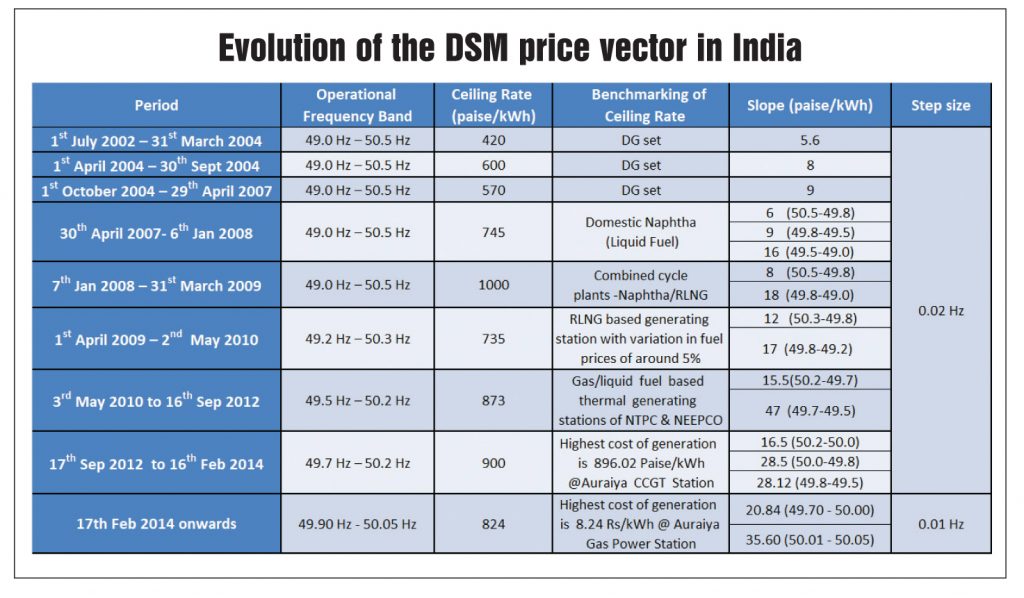 To begin with, the report suggests linking DSM and DAM prices for six months on a pilot basis starting April 1, 2018. The market-linked imbalance pricing mechanism can be refined based on the experience gained during the pilot exercise.

The report deliberates on various design aspects associated with the market-linked price vector and gives recommendations on each of these. It includes the following:

Prices available as a reference for DSM: Of the two available reference prices – DAM prices and the costliest generator despatched under ancillary services, the former has been preferred. The DAM comprises 3-3.5 per cent of the all-India generation with over 1,000 generators voluntarily participating in this double-sided closed auction for every 15-

Size of market segments proposed to be linked: About 90 per cent of electricity generated in India is tied up in long-term and medium-term contracts. The balance is traded in the short-term market, of which 5 per cent is traded in the bilateral (over-the-counter) market, 3-3.5 per cent in DAM and the balance 1.5-2 per cent in deviations. The average volume in DSM is 60-70 MUs per day. The DAM and DSM segments are of comparable size with the former being slightly larger. Further, the participants in the DSM segment can participate in DAM.

Unconstrained MCP or ACP and periodicity of prices to be linked: It is suggested that the daily average area clearing price (ACP) in the DAM should be used as the basis for the determination of market-linked DSM price at 50 Hz for the time being and not the time block (15 minutes) ACP, which could be highly volatile. The ACP will help factor the geographical aspect as well as the congestion. If there is no congestion, the ACP and the market clearing price (MCP) would be the same. Otherwise, if the market discovers congested corridors on a day-ahead basis, the ACP and MCP would be different.

Frequency band: A frequency band of 49.85-50.05 Hz is recommended for determining the DSM price vector initially. An advance notice of about six months may be given to the utilities to gear up for a tighter band of 49.90-50 Hz mandated by the Indian Electricity Grid Code.

Point of linking DSM vector and DAM prices: The average daily ACP can be used as a reference and linked to the DSM rate at 50 Hz.

Slope of the DSM rate vector: It will have a dynamic slope determined by joining the identified price points at 50 Hz (daily average ACP), low frequency of 49.85 Hz (Rs 8 per unit) and 50.05 Hz (zero) on a daily basis.

Volume limits and cap rates: The present DSM mechanism defines volume limits, violation of which attracts penalties in the form of additional charges ranging from 20 to 100 per cent of the applicable DSM rate for a particular time block. In order to ensure secure grid operation, all the volume limits along with associated surcharge/additional surcharge should be retained in the new market-linked DSM price mechanism. The volume limits for renewable-rich states have been relaxed to 150-250 MW by the CERC based on the level of renewable penetration. The cap rates for applicable generators should be linked to the variable charges for that generator as billed for the previous month.

Establishment of truly inadvertent deviations: For this, it is suggested that the sign of deviation must change once in  every six time blocks (instead of 12 time-blocks at present). Further, an appropriate commercial provision (such as a 20 per cent additional charge for violation) must be introduced to ensure compliance. Also, in energy terms, the total

deviation from schedule during a day should not exceed 3 per cent of the total schedule for the drawee entities and 1 per cent for the generators. In case of a violation, an additional 20 per cent charge of daily base DSM payable/ receivable will be applicable. 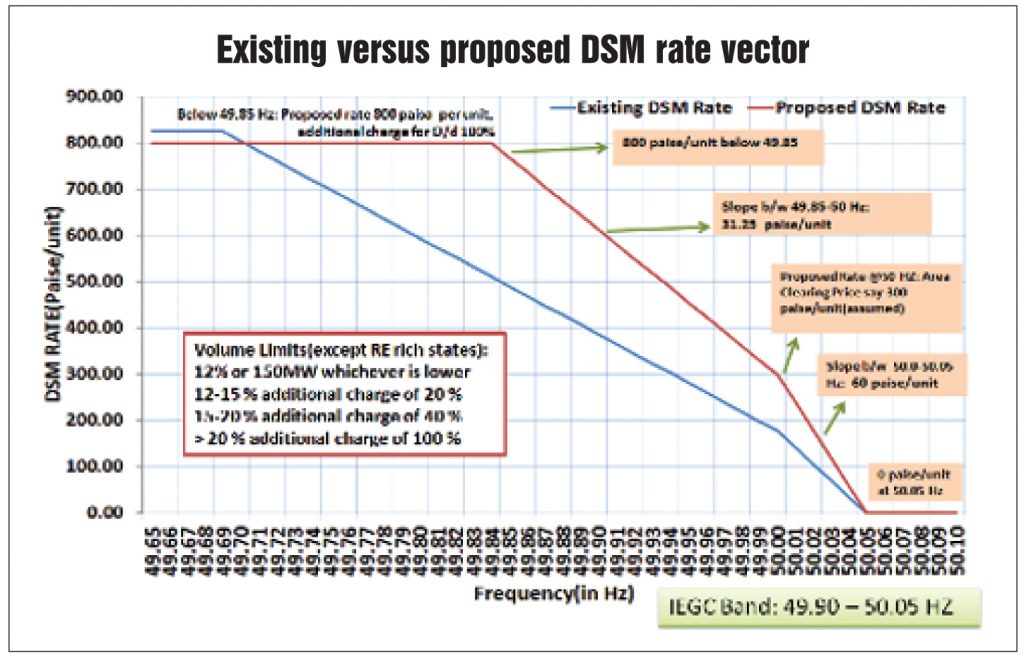 The linking of DSM rates with DAM prices is expected to ensure better demand estimation and accurate scheduling by discoms. This, in turn, is expected to improve grid discipline, act as a deterrent for those using DSM as a trading route, and provide the desired market signals for setting up of reserve and ancillary service-based capacity.

The central regulator, in collaboration with the system operators, is taking steps to ensure secure and reliable grid operations in light of the rapidly changing

market scenario and the integration of a huge renewable energy capacity. The development of market-linked mechanisms to deal with imbalances will be a notable step in this direction.