Given the challenges associated with upcoming hydropower projects, the pace of project development has become not just slower but also costlier in recent years. In this context, renovation, modernisation, uprating and life extension (RMU&LE) of hydro plants provide a cost-effective way to add capacity quickly, besides extending the plant life and ensuring better reliability and availability. The estimated cost per MW for R&M and life extension is much less than the cost of setting up new hydro projects of similar capacity. Further, R&M yields benefits in about three to four years as against six to seven years or even more for developing a new hydro project.

During 2017-22, 49 schemes (seven central and 42 state), with a combined capacity of 9,239 MW are expected to be completed. The total estimated cost for these projects is Rs 64.15 billion for an expected benefit of 4,755 MW. Of these, 24 projects are at the implementation stage, 15 at the tendering stage and two have been completed. Detailed project reports (DPRs) are under preparation for another eight projects.

For the period 2022-27, the government has identified a total of 17 projects (one central and 16 state) aggregating 1,956 MW for R&M works. The accrued benefits from these R&M works are expected to be nearly 752 MW. 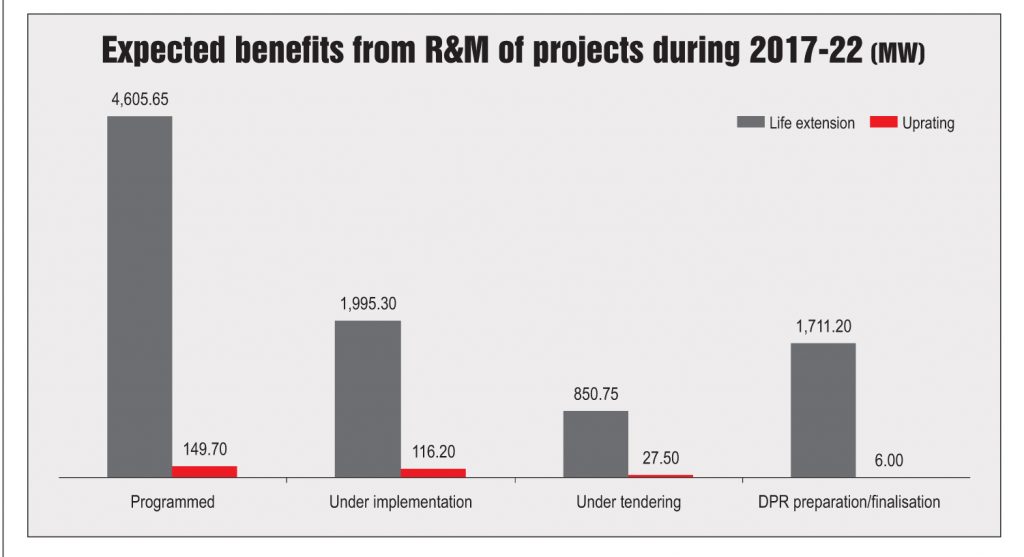 A key challenge in the implementation of R&M works is the lack of proper policies/guidelines, as a result of which utilities often do not carry out these activities. Further, utilities do not give due importance to the preparation of DPRs, which leads to complexities during the bid stage and in delays in R&M works. In addition, the lack of experienced contractors and consultancy firms hinders the implementation of such works. More often than not, utilities want to undertake piecemeal interventions rather than comprehensive R&M work. Therefore, various measures are needed to address these issues.

Normally, the renovation of a hydropower plant is undertaken towards the end of its useful life, that is, after 30-35 years. However, as per industry observers, given that hydro plants are subjected to silt erosion (especially in the Himalayan region), which then results in forced outages, R&M works need to be taken up much earlier than 35 years.

As RMU&LE plays a critical role in the operation of hydro plants, proper planning is needed for the identification of plants requiring renovation. To this end, residual life assessment studies must be conducted as a mandatory technical requirement. Similarly, experienced consultancy firms need to take up DPR preparation work, framing technical specifications and other related works till the re-commissioning of a plant. Utilities need to ensure the quality of DPRs since this not only helps in getting quicker approvals, but also allows timely execution of works. Further, equipment manufacturers need to assist power utilities in framing the scope of DPRs and provide them with timely budgetary allocations so as to enable utilities to firm up the financial requirement in the DPR. Since an increase in R&M costs can lead to higher tariffs for consumers, the implementing agency should consider the technical aspects, cost-benefits and consumer gains of R&M works.

To improve the reliability of a plant, utilities should make provisions for installing modern online monitoring systems, undertaking dissolved gas analyses of transformers, etc. Also, the use of  advanced technologies  for R&M like  computational fluid dynamics  analysis and simulation, finite element analysis for erosion and cavitation studies need to be taken up. RMU&LE works also need to be incentivised to ease the financial stress being faced by state power utilities. In essence, R&M works should be implemented in a phased manner in order to deliver the maximum benefits to plants and utilities. Better project management practices can also help in adhering to time schedules and in the timely completion of projects.