When the penetration level of renewable energy is high, the influence of harmonics on the output of power supply could be significant. Harmonic distortions from renewable energy plants can interact with pre-existing harmonic network distortions and cause serious issues in the grid. Harmonic resonance is caused by the interaction of inductive and capacitive elements such as transformers, power cables and capacitor banks in a wind or solar power project. Harmonics in power systems can damage equipment by causing extra losses in copper windings, torque pulsations, and excitation of mechanical nodes of turbine components.

Therefore, harmonics must be taken into account while developing large renewable energy plants. Various IEEE (Institute of Electrical and Electronics Engineers) and IEC (International Electrotechnical Commission) standards stipulate the limits on harmonic currents that can be produced by wind turbines or solar inverters. While sourcing equipment for a project, it is necessary to procure it from vendors that adhere to these limits. At times, however, limiting the harmonic current injection at equipment terminals is not sufficient to ensure acceptable levels of harmonic contribution from solar/wind projects. Often, parallel resonance may amplify the impact of harmonic currents injected by individual turbines/inverters. This can lead to high harmonic distortion in voltage, which adversely impacts system equipment and other loads.

Energy generation from renewable projects depends on day-to-day weather conditions and, therefore, it is difficult to forecast their output with a high degree of accuracy. The energy produced is highly variable and intermittent in nature, which affects the power quality when it is integrated into the grid. This can lead to voltage sags and swells, frequency deviations, flickers and fluctuations, and voltage spikes in the power system, posing a challenge in maintaining a balance between load and generation.

In order to mitigate the power quality issues arising out of the integration of renewables, steps need to be taken by developers as well as transmission planners and utilities. Developers and transmission utilities need to conduct studies to assess the harmonic impact of the wind/solar project on the power grid and vice versa. Sophisticated modelling techniques can be used for such harmonic assessments.

Further, in order to deal with the intermittency of renewable energy supply, adequate balancing resources need to be developed, besides accurate forecasting techniques. The state transmission utilities need to plan the implementation of reactive compensation devices as well as the setting up of renewable energy management centres (REMCs). As per the draft National Electricity Plan–Transmission, wind and solar farms should maintain a power factor of 0.98 (absorbing) at their grid interconnection point for all despatch scenarios by providing adequate reactive compensation.

The central government’s Green Energy Corridor project is focusing on the integration of large-scale renewable capacity into the national grid as well as the enlargement of the balancing area to address renewable volatility. The project entails the creation of transmission infrastructure in renewable-rich states as well as the implementation of control infrastructure solutions, including dynamic compensation devices [static var compensators (SVC) and static compensators (STATCOM)], REMCs and energy storage.

Power Grid Corporation of India Limited (Powergrid) is taking the lead in setting up maiden REMCs in seven renewable-rich states –  Tamil Nadu, Andhra Pradesh, Karnataka, Maharashtra, Gujarat, Rajasthan and Madhya Pradesh; three regional load despatch centres – Southern Region, Western Region, Northern Region; and at the National Load Despatch Centre. The REMCs will be responsible for forecasting the renewable energy generation within their jurisdiction for different time horizons, and real-time tracking of generation and close coordination with their state load desptach centre or regional load despatch centre for smooth grid operation. Currently, a decentralised forecasting/scheduling approach is being followed, whereby each wind farm and solar park with a capacity of more than 10 MW and 5 MW respectively has to submit its schedule individually. Once commissioned, the REMCs will be handed over to the respective state load despatch centres/Power System Operation Corporation Limited. 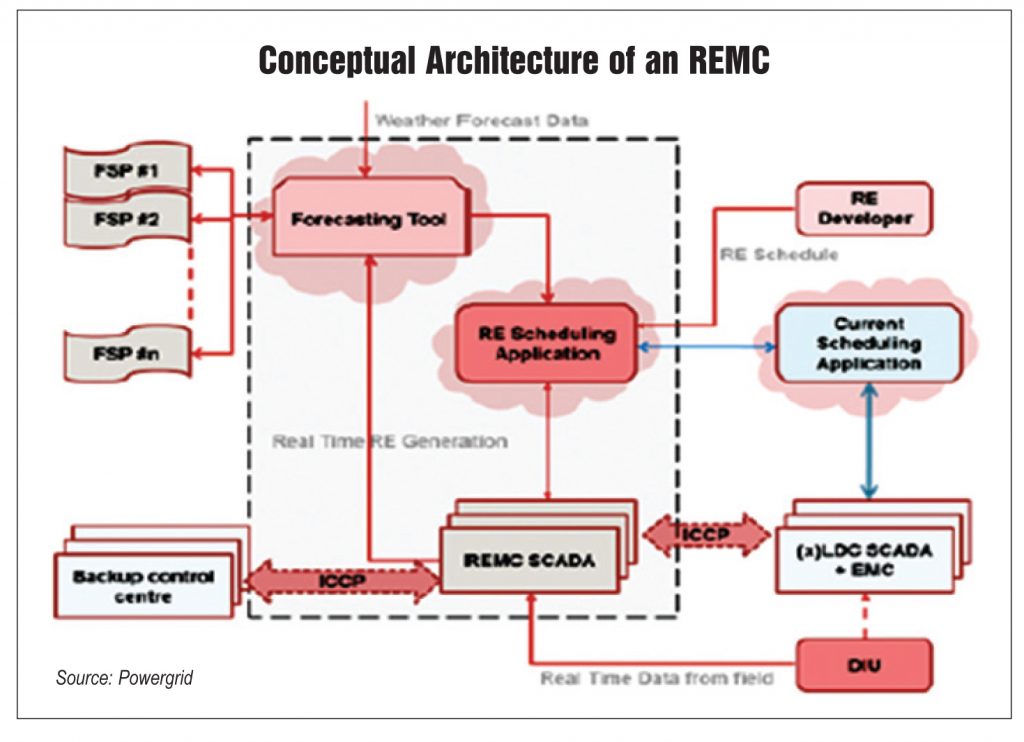 In addition, the deployment of SVCs and STATCOMs worth Rs 36 billion is under way in the interstate transmission system. These devices will provide dynamic stability to the grid under contingent conditions, and a fast and robust system response to severe disturbances in the grid where voltage recovery is critical.

Further, NITI Aayog’s Draft National Energy Policy (NEP) suggests the establishment of flexible demand and supply sources to ensure smooth grid operation. Flexible supply sources include gas turbines, flexible coal-based power plants and pumped storage hydro plants that can come online/go offline quickly in order to maintain grid frequency when renewable generation goes down/up suddenly. Similarly, the creation of flexible demand sources requires the implementation of demand response programmes and smart meters at consumer premises. This can help a utility to meet a sudden surge in demand in an area (owing to a shortfall in renewable generation) by directing consumers to curtail their electricity consumption during a certain period.

Going forward, all these measures will play a crucial role in ensuring power quality, frequency regulation, load balancing, and system stability and security in the transmission grid with the increasing penetration of renewables.