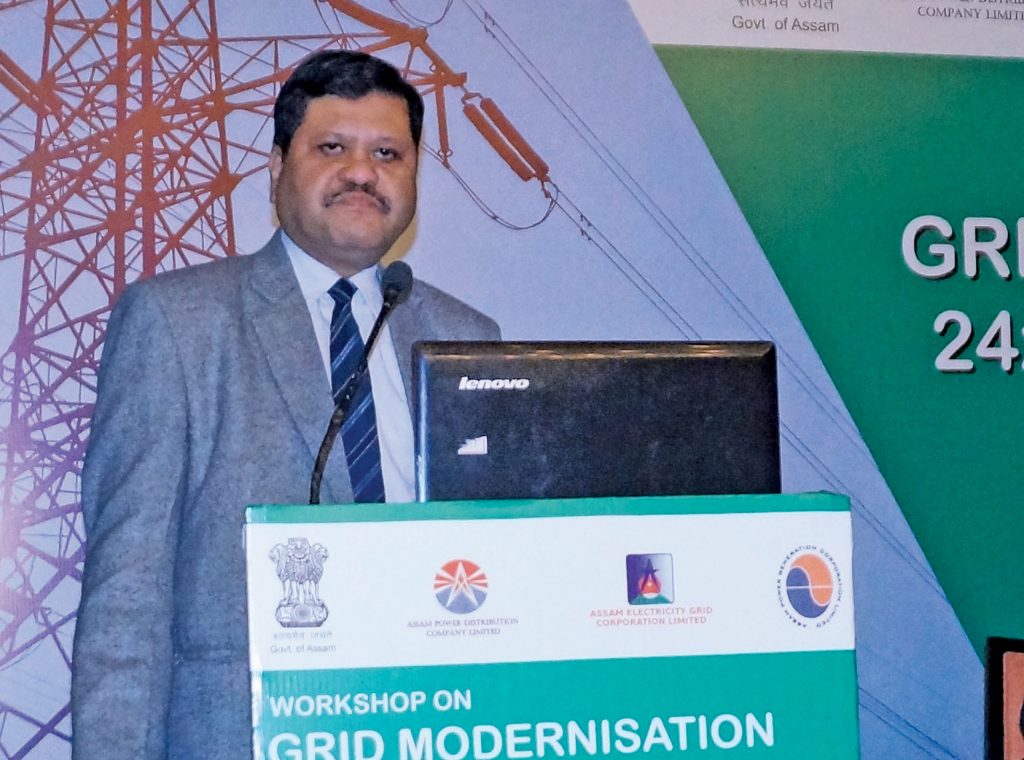 Assam’s power sector has seen major improvements in recent years. The state has achieved 100 per cent rural village electrification and has been able to lower its aggregate technical and commercial (AT&C) loss levels significantly under the Ujwal Discom Assurance Yojana (UDAY), besides improving its collection and billing efficiencies. The state is now gearing up for the expected growth in the solar power segment With a number of projects at the tendering and execution stages. New thermal projects as well as renovation and modernisation of existing ones are also key priority areas to ensure 24×7 power for all. At a recent workshop on “Grid Modernisation in Assam” held by Power Line in association with Schneider Electric India in Guwahati, Jishnu Barua, principal secretary, power, Government of Assam, shared his views on the state’s plans and priorities. Excerpts….

Current state of the sector

Assam’s power sector is on the rise. We recently held the Global Investors’ Summit where we sought investment in the power sector from global players. The summit was quite successful and garnered significant interest from investors in Assam, particularly in the solar energy segment. Solar is the new greenfield investment area in the state where there is immense scope for investment.

Currently, all the three power sector companies are performing relatively well. They have not been reporting profits but are improving each day. The state discom currently provides employment to maximum number of the power sector employees (around 11,000). There are nearly 2,000 employees in the transmission company and  less than 1,000 employees in the generation company. The genco and transco are dependent on the discom for their well-being and once the discom starts paying dues to the transmission company and the generation company, all three companies would do well.

In the wake of the programmes like UDAY, we have made significant strides in bringing down AT&C loss levels from the 23 per cent earlier. Our target is to lower them to 15 per cent. The state government has helped us achieve these targets. Moreover, it has cleared all dues pertaining to UDAY except one last tranche. The cabinet and the state government have already decided to convert the past dues of the discom into equity and grant, so that the discom’s balance sheet is cleaned up.

In 2016-17, we collected around Rs 40.08 billion as revenue, while in 2017-18, we have already collected Rs 44.62 billion (up to February). If we manage to collect around Rs 3 million-Rs 4 million additionally in March 2018, the increase will be about 20 to 25 per cent higher than the previous year.  However, we did have higher expectations as far as revenues are concerned. In December 2017, we were able to bring down our AT&C losses by about 4 per cent and collect around Rs 5.06 billion (excluding government subsidy), which was an enormous achievement. We have, however, not been able to recapture that kind of intensity in our collection in the months of January and February 2018. This was because of the lower energy injection in these months to a certain extent as well as other reasons (fewer working days, etc.)

For 2017-18, by the third quarter, our AT&C losses were 19.98 per cent. In the last three months of 2017-18, if our revenues reach around Rs 48 billion, the losses should be in the range of 17 per cent or lower. The distribution companies are working extremely hard on this front. We are monitoring the daily collections through a WhatsApp group of senior officers.

A large number of rural areas were either not getting power or stable power supply earlier. However, recently with the Deendayal Upadhyaya Gram Jyoti Yojana (DDUGJY), all our villages have been electrified well within the targeted timeline of December 31, 2017. After the launch of the Saubhagya programme, the central and the state governments have mandated that all households have to be electrified. Therefore, by March 2019, another 2.4-2.5 million of the 4.2 million consumers in the state will be covered.

Assam has about 15,000 square miles of area across three revenue districts with a population of about 1.2 million that is completely covered by hilly terrain. These areas are largely underserved. There are also many isolated hamlets, which are best served by either microgrids or stand-alone solar plants. We are trying to improve our power supply to serve these areas.

Our generation company provides only about 240 MW of power, whereas the installed capacity (after accounting for the decommissioning of some units) is about 335 MW. The state’s peak load is around 1,750 MW. The unit cost of delivery of power is as low as Rs 4.9 per unit; however, the cost is higher what we get from outside the state and other sources.

Assam Power Generation Company Limited is currently executing several projects. The 802 MW Margherita thermal power plant is a major upcoming project. It is proposed to be set up as a pithead project using local coal. Several project-related works need to be completed like obtaining coal linkages, and environment and forest clearances, etc. The genco is also working towards replacement, modernisation and renovation of some of the older plants. The replacement unit of the Lakwa thermal power project will be inaugurated very soon. We are closely monitoring the timelines, implementation and execution of our projects. In fact, I am personally monitoring the 13.5 MW Myntriang small-hydro plant.

In addition, we have several solar power projects, which are expected to come up this year itself. The Solar Energy Corporation of India has approved the tender for the 70 MW Amguri solar power project. A pre-bid meeting has also been held. Further, we have floated tenders for solar projects in four different zones aggregating about 100 MW. For these tenders, the ceiling prices range from Rs 4.36 to Rs 4.4. Rooftop solar projects are also expected to come up in the state, in the wake of the solar policy, which has been unveiled by the state government and will be duly notified. The policy will offer as many benefits as policies in other states. We will be following a transparent competitive bidding process. Moreover, wheeling and transmission costs will also be waived.

On the transmission front, we are planning to implement a massive Asian Development Bank-funded project worth over Rs 30 billion to improve the grid system. With the country now coming under one national grid, there is no power shortage; however, we have to ensure that there is stable 24×7 power supply. The systems have to be in place to absorb and distribute power without any transmission losses, without any drop in voltage, grid breakdowns, etc. This requires a lot of investment. We are also thinking in terms of inviting private investments in one or two transmission lines.

We have one major grid line from Rangia to Salakati, which is under construction. However, there are certain right-of-way issues owing to which the project has been delayed. However, we are completely focusing on it and trying to complete the project in another month or two. The managing director of Assam Electricity Grid Corporation Limited is personally supervising the project. We are also seeking help from the local administration.

The state’s power demand is expected to reach around 4,000 MW in another four to five years. Renewables are important because not only are they a clean source of energy but also because we have to meet our renewable purchase obligations (RPO). Approximately 523 MW of power will have to be sourced from renewable energy sources if we are to meet our requirements. So far, we have not able to meet our RPO targets. However, we are determined to have a good fuel mix to include not only solar and wind, but hydropower as well. In the near future, the state will definitely meet its RPO targets and go a little beyond that but it will not replace the other sources of energy.