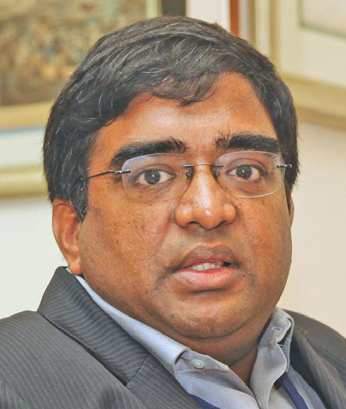 Vinay Kumar is the chief operating officer of the Greenko Group, currently heading the wind and solar verticals. Since he joined the company in 2014, he has, along with his team, commissioned a large portion of Greenko’s over 3,000 MW of clean energy assets in solar and wind. In his current role, he manages the execution of projects in terms of costs, time and quality, and is responsible for building world-class project execution teams. He heads a 600-member project team, with simultaneous operations spread across the country.

His experience spans the entire power sector value chain with stints in generation, transmission and distribution. Before joining the Greenko Group, Kumar co-founded VARP Power Private Limited and was its chief executive officer. The company is dedicated to setting up solar PV grid-connected substations and selling power to customers through long-term power purchase agreements. Prior to his power sector foray, he was with the Indian Revenue Service, Ministry of Finance, where he spearheaded many transformational IT initiatives in the customs and central excise departments.

One of Kumar’s most memorable assignments at Greenko has been the recent commissioning of the world’s largest solar plant in Kurnool Ultra Mega Solar Park in Andhra Pradesh, which was delivered in a record time of five months. He was also a part of the core team that oversaw the merger of the Indian assets of SunEdison with the Greenko Group.

Kumar believes that renewable energy is in the initial scale-up phase in India. He says that utilities today look at three primary parameters when they buy power – affordability, sustainability and reliability. Renewable energy already ticks off two of these three boxes and is on its way to meeting the reliability requirements of the grid. When that is met, Kumar adds, it will be a tipping point in energy disruption. He looks forward to the day when the Indian economy will run completely on uninterrupted clean power and the market will move away from capacity-based, incentive-driven targets.

Kumar obtained a degree in mechanical engineering from IIT Madras and then went on to study business management at XLRI, Jamshedpur. He is also a certified chartered financial analyst. In his spare time, he likes to read books of varied genres, but especially military history. His family includes his wife, who is a gynaecologist, a daughter and a son, who is studying engineering in the US.