Spearheaded by public sector undertaking Energy Efficiency Services Limited (EESL), the objective of the programme is to provide light-emitting diode (LED) bulbs to domestic consumers and aims to replace 770 million incandescent bulbs with LED bulbs by March 2019. The idea is to provide energy efficient LED bulbs to people at affordable prices as compared to the high market price. To minimise costs, EESL has aggregated demand and undertaken bulk procurement of LED bulbs, which has led to a significant reduction in LED prices.

As of April 8, 2018, nearly 295 million LEDs have been distributed across the country. With UJALA, India’s share in the global LED market has increased from 0.1 per cent to 12 per cent, and LED penetration in the domestic market has risen from 0.4 per cent to 10 per cent. The programme, thus, has significantly altered the energy landscape of the country.

UJALA was preceded by the Bachat Lamp Yojana (BLY), which was launched by the Bureau of Energy Efficiency (BEE) in 2009 to replace 400 million conventional incandescent bulbs with compact fluorescent lamps (CFLs). Under the BLY, CFLs were provided at a highly subsidised price of Rs 15 per lamp against a cost of around Rs 70. The balance cost was recovered through the clean development mechanism (CDM). However, the scheme failed to scale up owing to the crash in carbon prices under the CDM, as a result of which subsidising the lamps became difficult.

With the advent of LED technology in the lighting sector, the UJALA scheme was brought in January 2015 to replace the BLY. All households with a metered electricity connection are eligible to procure subsidised LED bulbs from the government. Further, in order to cater to the requirements of the lower-income groups and economically weaker sections, the programme allows consumers to purchase LED bulbs in easy monthly instalments linked to their electricity bill. The LED bulbs are distributed through discom offices, discom bill collection centres and designated EESL kiosks.

UJALA is a zero-subsidy scheme. EESL has adopted a unique business model wherein it aggregates demand from various locations and initiates e-procurement of large quantities of bulbs to get the benefit of price reduction. Thus, consumers get bulbs at a much lower price than the market price.

The scheme is being monitored in real time with data on the UJALA dashboard, which gives a state-wise snapshot of the bulbs distributed and the energy savings achieved, among other things.

The targets under UJALA are annual energy savings of nearly 100 billion kWh, with a corresponding annual reduction of 79 million tonnes (mt) in carbon dioxide (CO2) emissions and a reduction in peak electricity demand by 20,000 MW.

As per the UJALA dashboard accessed on April 8, 2018, with 295.36 million LED bulbs distributed so far, the resultant annual energy savings have been 38,358 million kWh. Further, an annual cost saving of Rs 153.43 billion and a reduction of about 31.07 mt in CO2 emissions have also been achieved. UJALA has also contributed to an avoided peak demand of 7,679 MW.

State-wise, Gujarat has outperformed the other states by distributing 39.21 million LEDs. It is followed by Uttar Pradesh and Andhra Pradesh, which have distributed 23.93 million and 21.8 million LEDs respectively. With respect to distribution targets, Nagaland ranks first, having distributed 641,200 LEDs till December 26, 2017 against a target of 500,000 for 2017-18, indicating an achievement of 128.24 per cent. Goa stands at the other end of the spectrum with only 2,081 LEDs distributed against a target of 1 million during the same period, implying an achievement of less than 0.5 per cent.

UJALA has had a significant impact on the price of LED bulbs in the country, registering a decline of 88 per cent. The price of an LED bulb in September 2016 stood at Rs 38, compared to Rs 310 in February 2014. It has also provided a fillip to the LED lamp manufacturing industry, with a fourfold increase in domestic LED manufacturing capacity. India is now the second largest LED market in the world after China. According to a report by Prayas, an NGO, on the impact of UJALA, India currently has about 176 local manufacturing units and 300 registered companies selling LED bulbs.

Further, EESL’s specifications, including the three-year warranty requirement, have ensured that the LED bulbs procured meet high quality standards, with a failure rate of only 0.3 per cent. This has helped build market confidence in the product. Lastly, the programme has brought about a much-required mindset change among people and sensitised them to the concept of energy efficiency. 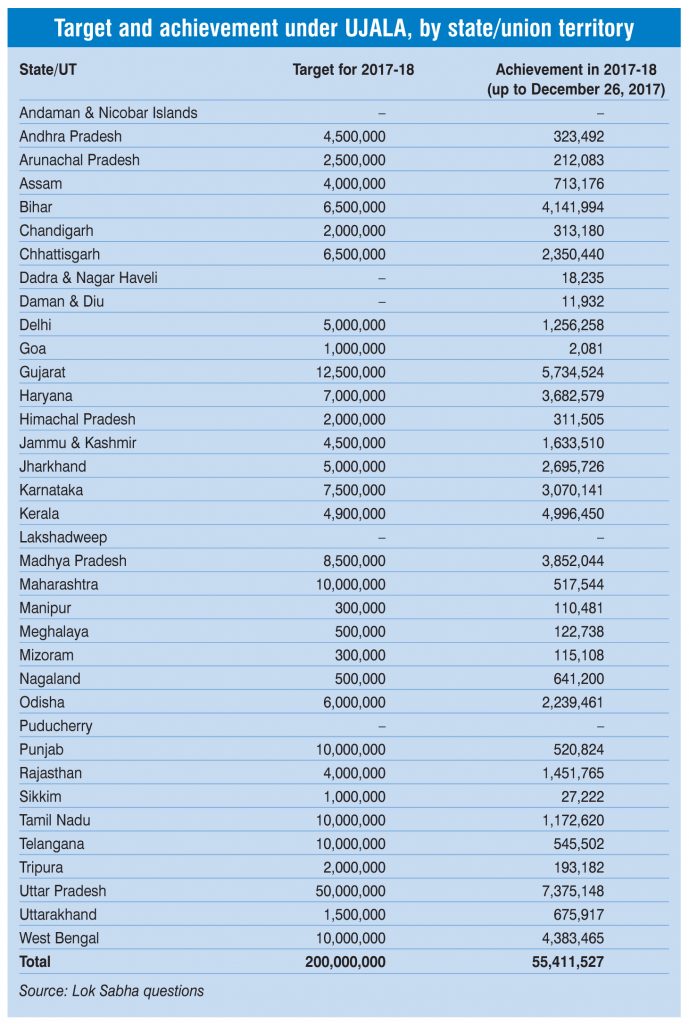 After successfully implementing the UJALA scheme in the country, EESL launched the scheme in international markets such as the UK and Malaysia. The company also plans to expand its footprint in Canada, Bangladesh, Sri Lanka, Nepal and Saudi Arabia. EESL has, moreover, been focusing on expanding its market in India. The company recently signed an MoU with the Airports Authority of India (AAI) for the installation of energy efficient lights at airports, buildings and offices owned by it. The project is expected to be completed by June 2018.

Moving ahead, on the back of the success of UJALA, EESL plans to introduce new energy efficiency initiatives in the country and capitalise on the market for residential fans, street lighting, air conditioners, agricultural pumps and now, electric vehicles. Endeavours in the energy efficiency segment clearly indicate the country’s commitment to usher in greater efficiency in the electricity sector.