The LED lighting market in the country has matured significantly in recent years, with impetus from the Unnat Jyoti by Affordable LED for All (UJALA) programme. The share of LED bulbs in the lighting market has also increased manyfold. As of end 2016, LED occupied a 54 per cent share in the lighting market in value terms (against 11 per cent in 2012) and 17 per cent share in volume terms (against less than 1 per cent in 2012). Further, the market has seen a significant reduction in LED prices and an upsurge in the domestic production capacity.

The rapid growth of the LED market can be attributed to the government initiatives in the segment including the National LED Programme, which was launched in January 2015 with the aim of promoting the use of efficient lighting technology at affordable rates. The programme has two components, UJALA and the Street Lighting National Programme (SLNP). Under the former, the government aims to replace 770 million incandescent bulbs in households with LED bulbs while under the latter it has set a target to replace 13.4 million conventional street lights with smart and energy efficient LED street lights by March 2019.

UJALA is being implemented by Energy Efficiency Services Limited (EESL). Under the scheme, LEDs are available at an initial payment of Rs 10 and the remaining cost is recovered through easy instalments over 10-12 months. As of April 20, 2018, the total number of LED bulbs distributed across 34 states/union territories stood at 296.19 million. The resultant energy savings are estimated at 38 billion units per year and cost savings at Rs 154 billion. State-wise, Gujarat has been the front runner, distributing 39.23 million LEDs. 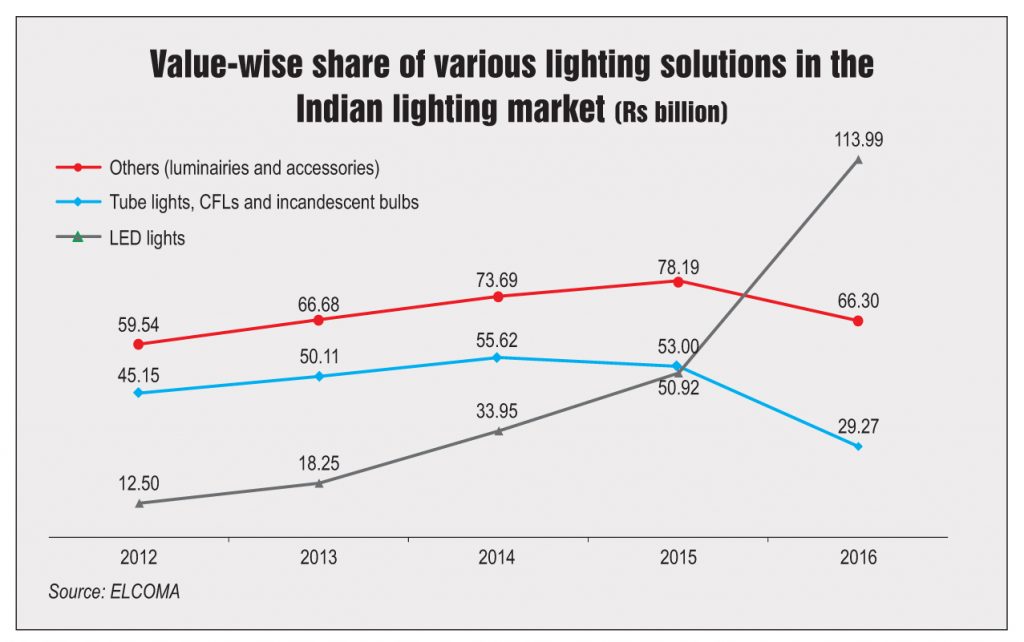 Earlier, the lighting market was dominated by compact fluorescent lamps (CFLs). However, post-2013, LED lighting gained traction. Between 2014 and 2016, the shares of incandescent bulbs and tube lights remained almost unchanged at 54-56 per cent and 15-16 per cent respectively, while the share of CFL bulbs reduced from 28 per cent to 14 per cent.

On the pricing front, the LED market has witnessed a significant correction over the past couple of years. LED prices under UJALA declined from as high as Rs 310 per bulb in January 2014 to Rs 38 in September 2016 (discovered under the EESL tender). The price decline is primarily attributed to the procurement methodology followed. The tenders for bulk procurement issued under the scheme help manufacturers gain from economies of scale and manufacturers often bid aggressively to win the orders. Besides, the procurement process excludes dealers and retailers from the programme, thereby excluding their commission from the final price. 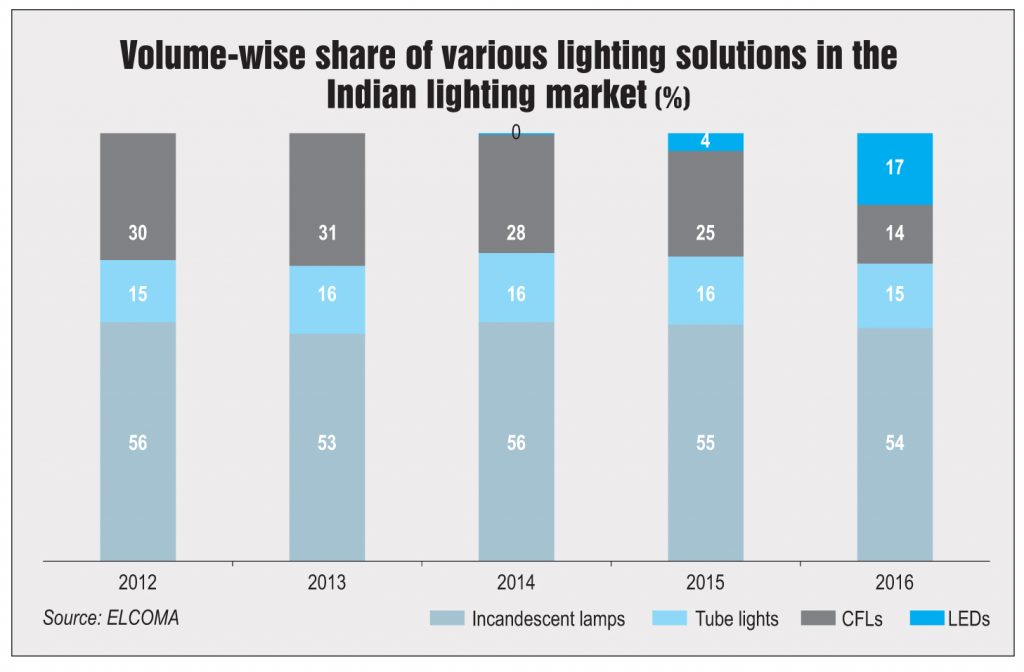 Notably, the price of LED bulbs sold under UJALA is half their retail price. After taking into account EESL’s returns, distribution costs and taxes, the price of a 9W LED bulb is Rs 65-70, as against its retail price of Rs 120-150. In this regard, the report of the Prayas Group, “Understanding the Impacts of India’s LED Bulb Programme, UJALA”, states, “There is no possibility of the market price matching the UJALA price. UJALA prices did act as an external pressure point for a reduction in market prices, but this reduction seems to have reached its limit now.”

Further, as per the report,  there are over 150 local manufacturing units, around 300 registered companies selling LED bulbs and around 15 accredited testing laboratories in the country. The growth of the LED market has primarily been fuelled by the huge demand for LED bulbs under UJALA. As the demand for LED bulbs increased, manufacturers found investing in local assembly lines more economical than importing bulbs. Manufacturers also preferred dealing with one consumer, EESL, rather than engaging with thousands of distributors and retailers across the country. This also brought down transportation costs as they could pack a larger quantity of bulbs in a single shipment to EESL warehouses. 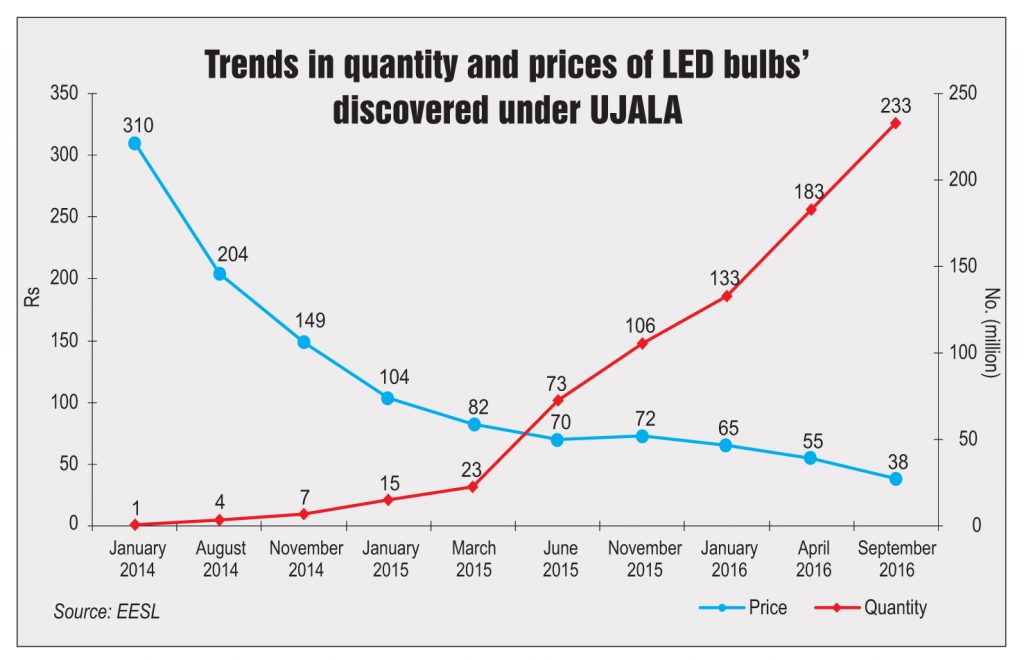 The LED market has witnessed a phenomenal growth over the past few years and the trend is expected to continue in the coming years. As per industry estimates, the Indian LED lighting market is expected to reach a size of Rs 310.1 billion in 2020, growing at a CAGR of 62 per cent between 2016 and 2020. Globally, the LED lighting market is expected to grow at a CAGR of over 40 per cent, in revenue terms, till 2020 from Rs 1,500 billion in 2015. Besides, the growing interest in newer technologies and solutions, and increasing awareness created by LED suppliers through product promotion and advertising are expected to further drive the LED adoption.

Intelligent and smart lighting envisaged under the Smart Cities Mission will create additional demand for LED. According to a study by the Climate Group, upgrading to LEDs can bring down energy consumption by 50-70 per cent. Technology giant Microsoft recently announced plans to deploy a customised internet of things- based solution to control, monitor and manage smart LED public street lights in Jaipur, Rajasthan. The project is expected to result in savings of around $1 million per year on account of reduced energy consumption. Another growth driver for the adoption of LEDs is the government’s focus on energy conservation and efficiency. In view of the declining plant load factor and the absence of a project pipeline for coal-based plants, the government is promoting the adoption of energy efficiency measures and undertaking demand side-management to maintain the reliability of the power sector.

To conclude, the LED market has witnessed significant consolidation in recent years, with the increase in domestic demand and production, and correction of LED prices on the back of UJALA and the growing focus on energy efficiency in electricity consumption. However, for sustaining the growth momentum, it is necessary to ensure healthy competition in the market, continue replacement of traditional lighting options with LED bulbs at the same pace and maintain product quality through strict adherence to the prescribed standards.