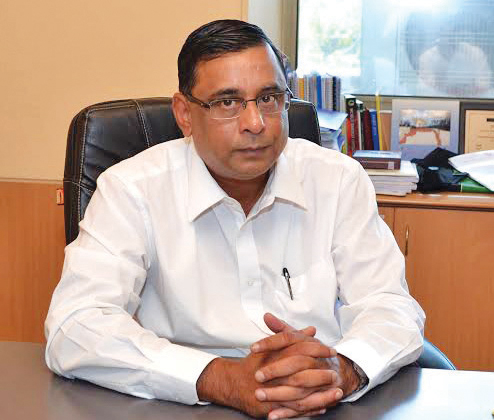 Whatever job he takes up, Saurabh Kumar finds himself firmly in the vanguard of reform. What can be more pioneering right now (apart from artificial intelligence) than ushering in electric cars? Switching the entire government fleet to electric vehicles (EVs)? Creating a whole new infrastructure of charging stations to support these cars? It’s a fascinating job and, after five years as head of Energy Efficiency Services Limited (EESL), set up to lead India’s energy efficiency programme to reduce carbon emissions as parts of its climate change goals, Kumar has lost none of his enthusiasm.

EESL has kick-started the government’s EV programme under which, to begin with, half a million cars used by the government, its agencies, public sector undertakings and regulatory bodies are going to be replaced with electric cars. The first 120 cars to be manufactured for the government were rolled out on March 7 this year and handed over to various departments. The next batch will be handed over soon.

“We have proposed that the government fleet should switch to electric cars because this would send the right signal to the industry. The ministry has urged all departments to make the switch but it is, ultimately, up to every minister and every state government. Andhra Pradesh has committed itself to making all government cars electric,” he says.

The government fleet is simply a subset of the wider goal of promoting electric mobility. Kumar himself has been driving an electric car to commute between his home near India Gate to the EESL office in Noida and is happy with the experience. Electric cars, he notes, have an amazingly lower operational cost as compared to petrol or diesel cars. Their operational cost is one-sixth that of a petrol car and it is this that compensates for its high capital cost. “You recover the capital cost very fast. People are prepared to pay a higher price for the sake of lower operational costs,” he says.

At the moment, not enough people are aware of the benefits. Charging stations are not close enough, triggering a “range anxiety”, that is, will my car run out of fuel before I reach the next charging station? “It’s a chicken-and-egg situation. We won’t be selling enough electric cars until we have the charging infrastructure that is visible to me as a consumer. A consumer won’t tolerate the risk of running out of fuel and being stranded,” he says.

The key is setting up charging stations all over the place quickly. “It’s not that petrol stations can’t become charging stations, or parking lots. They can. The issue is the regulatory uncertainty about who can own it and whether it is classified as the sale of power or a service. If it’s a service, at what tariff will the discoms provide it? Who are the people who can set up the charging stations?” says Kumar.

The power ministry has recently announced a policy on this regulatory issue, under which charging EVs will be a service and not a sale of electricity. This means that those setting up charging stations will not require a licence. “My hope is that the new policy will attract private sector (domestic and foreign) investment in charging infrastructure,” says Kumar. “If there is a decent return, investors will want to come in. In fact, there are already plenty of Indian companies getting into charging infrastructure.”

States such as Karnataka, Andhra Pradesh, Telangana and Maharashtra are considering waiving registration charges for electric car buyers as an incentive. Some countries waive parking fees. These are simple measures that can drive demand.

Meanwhile, the price of the battery (which constitutes about 60 per cent of the cost of an electric car) looks set to keep falling. This prediction of falling prices is based on global demand, excluding India. If demand in India is added to the equation, the price may fall even faster.

EESL has also launched India’s revolutionary LED bulb replacement programme, Unnat Jyoti by Affordable Lighting for All (UJALA), to hand out affordable bulbs to people. It is distributing 400,000-500,000 bulbs a day. Prices have come down from Rs 300 per bulb in 2014 to around Rs 38 per bulb today. Kumar says that it is now planning massive expansion in rural street lighting, high capacity energy efficient municipal water pumps and overseas markets.

Recently, EESL signed an agreement with the Airports Authority of India to change all its lighting to LED lights. ESSL will invest in replacing the existing bulbs and the cost will be covered by the electricity savings that accrue over the next four to five years.

Kumar is an Indian Revenue Service officer of the 1992 batch. He is an electrical engineer from IIT Kanpur and has a master’s in public policy from the National Graduate Institute of Policy Studies, Tokyo, Japan. He has worked in various capacities in the Income Tax Department, the Ministry of Power, and the Bureau of Energy Efficiency (BEE) under its founder Dr Ajay Mathur.

Kumar expresses great respect for Mathur for having inspired and moulded him when he joined BEE. “At the time, I hardly knew anything about energy. I had spent 16 years in the tax department. I had no clue. But Dr Mathur shaped me as a professional in terms of intellectual and practical knowledge,” he says.

His time as a tax collector from 1992 to 2002 was exciting and satisfying. Getting wind of a tax scam, investigating it rigorously so that the claims could hold water, conducting tax raids to collect further evidence and finally getting the tax that had been evaded back into the public exchequer was very satisfying. “I loved the job. I had the independence to investigate anything where I thought tax was being evaded. You have to be creative because the Indian tax evader is ingenious and you have to be creative too in digging out what has been concealed from you. And every case is different.”

One case that he recalls involved simultaneous tax raids on 110 premises belonging to a large industrial house. The raid unearthed a scam of Rs 24 billion. Asked how a tax collector first begins to smell something fishy, Kumar replies: “You start seeing funny activities from the information gathered by your sources. You see a small firm that has a share capital of Rs 300,000  procuring goods worth tens of thousands of crores. You start digging,” he explains.

“Secrecy was absolutely crucial to success. If news of a tax raid is leaked even five minutes before I arrive at the door where the offender has Rs 1 crore of cash inside, those five minutes give him enough time to dispose of the cash and all our efforts of months would have been in vain,” he says.

Looking back on this success, Kumar attributes his zeal to the fact that he was just into his second year as a revenue officer and had “notions of changing the world”.

But while Kumar loved the work, the human aspect was not appealing. Tax raids can unearth secrets that destroy families and relationships. The high emotion and distress that break out in a family when tax officers appear at the door are not a pleasant sight, particularly if children come home from school and walk into that scene.

To come back to Kumar always being in the thick of new reforms, he joined the power ministry in 2002 as deputy secretary in charge of the budget and financing wing during the time when the Electricity Act was introduced and distribution reforms started. The new tariff policy was also coming in. “With so much policy change, it was a great learning experience for me because so much of what you see today was started in those years,” he says. He was also responsible for the task of appraising large power projects for government investments.

Likewise, at BEE, he worked with Mathur between 2007 and 2010, helping to set up the organisation at precisely the time when energy efficiency had become a focus area for the government. “Many things that BEE has done are gold standard in terms of policy and regulation, such as the Perform Achieve and Trade (PAT) scheme, which the World Bank picked up as a showcase,” he recalls.

“If you want me to assess India’s efforts in energy efficiency, I would say we are one of the best in the world. We are leaders in the global lighting challenge. Our EV programme is ambitious and advanced. In terms of energy efficiency policy and implementation, I would rank India among the top three to five countries.”

Although his term ends in April 2018, it has been intimated to Kumar that he will be asked to continue for another two years. “I am happy with that. It’s been an incredible journey, often doing things that are not only being done for the first time in India but often for the first time in the world. I mean, who else in the world has 5.2 million light bulbs? What can be a better demonstration of India’s commitment to energy efficiency than this alone.”