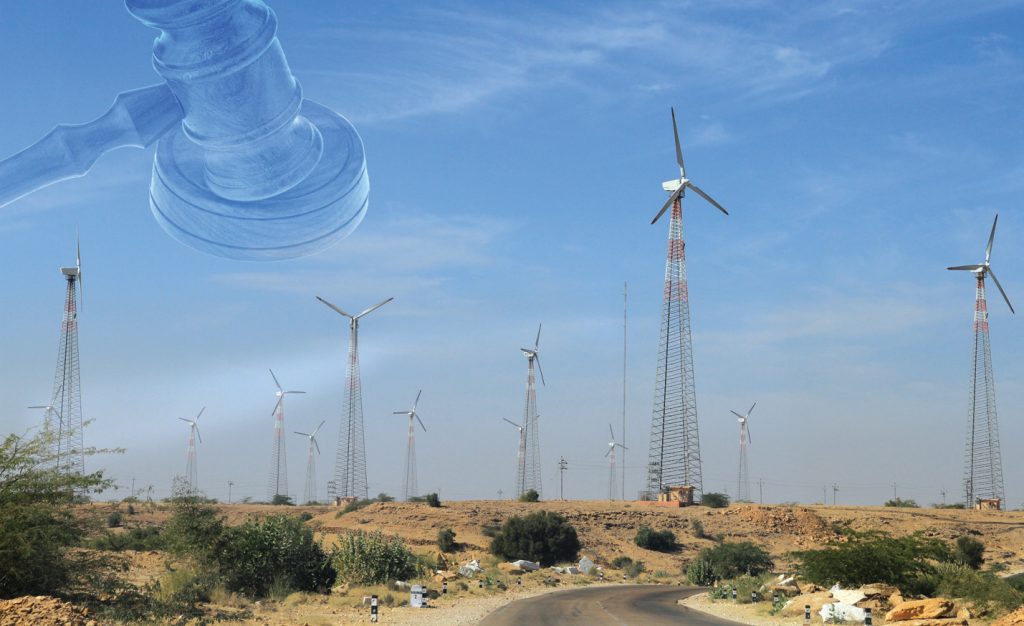 In 2017-18, the wind power segment witnessed a transition in the tariff regime from feed-in tariffs (FiTs) to the competitive bidding route, leading to a temporary slowdown in capacity addition during the year. However, the industry has regained momentum and 10-12 GW of wind power capacity is expected to be developed over the next two to three years. This can be attributed to the recent positive developments in the segment including the waiver of interstate transmission charges for wind power plants commissioned till March 2022, release of guidelines for competitive bidding based on wind project allocation, and launch of policies for wind-solar hybrids and offshore wind power projects.

As of March 2018, the installed wind capacity stood at 34 GW, growing at a compound annual growth rate (CAGR) of 13 per cent since 2013-14. Between 2012-13 and 2016-17, wind capacity addition recorded an increasing trend. However, it witnessed a steep decline in 2017-18. Around 1,766 MW of capacity was added during the year as against 5,503 MW in the previous year. The record capacity addition in 2016-17 was on account of a combination of factors such as phasing out of accelerated depreciation benefits and discontinuation of generation-based incentives with effect from April 1, 2017. Meanwhile, the slowdown in 2017-18 can be attributed to the transition to competitive bidding for project allocation.

The first-ever reverse auction for wind power projects was conducted by the Solar Energy Corporation of India (SECI) for 1,000 MW of capacity in February 2017. The auction recorded a winning tariff of as low as Rs 3.46 per kWh. Since then, seven auctions have been conducted, of out of which four were undertaken by SECI and one each by Tamil Nadu, Gujarat and Maharashtra. A total of 7.5 GW of wind capacity has been tendered in a span of 15 months. The winning tariffs discovered in these auctions range from Rs 2.43 to Rs 3.46 per kWh. The lowest tariff of Rs 2.43 per unit was discovered in the tender issued by Gujarat Urja Vikas Nigam Limited (GUVNL) for 500 MW of wind capacity.

In order to streamline the bidding process for these projects, the Ministry of Power, in December 2017, issued competitive bidding guidelines for solar and wind plants. The guidelines provide a transparent and cost-effective framework for wind power procurement. They are applicable to interstate transmission-based projects with a minimum bidding capacity of 25 MW, of which at least 5 MW is at a single location. Meanwhile, for intra-state projects, the guidelines stipulate the minimum bidding capacity of 50 MW, with at least 10 MW at a single location.

Prior to the introduction of competitive bidding, wind FiTs determined by various state electricity regulators varied from Rs 4 to Rs 6 per kWh, depending on the speed and intensity of wind in a given state. Following a reduction in wind tariffs under the competitive bidding regime, discoms felt that they had been paying very high tariffs for wind power and therefore decided to not sign any further power purchase agreements (PPAs) under the FiT system. In fact, discoms in many states were reluctant to honour the already signed PPAs, which were yet to be approved by the respective state regulatory commissions. 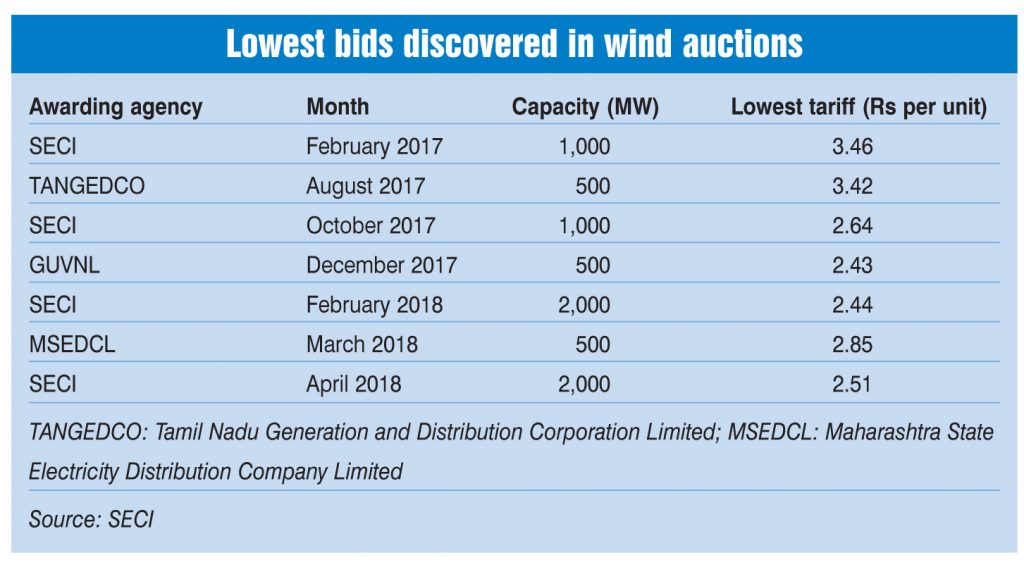 An emerging area for the deployment of wind energy in the country is wind-solar hybrid projects. Power generation from hybrid projects is significantly less variable than generation from stand-alone solar and wind projects. Besides, in these projects, there is optimal utilisation of critical infrastructure such as land and evacuation network, which account for 10-12 per cent of the project cost. Therefore, the Ministry of New and Renewable Energy (MNRE), in May 2018, released the Hybrid Wind-Solar Policy, which provides guidelines for the procurement of power from a hybrid project through the tariff-based bidding process. The guidelines outline the eligibility criteria for the procurement of hybrid renewable energy to meet the renewable purchase obligation (both solar and non-solar) of the obligated entities. They also extend the policy and financial benefits that are currently available for existing wind and solar projects. More recently, SECI has announced its plans to issue a tender for setting up a 2 GW hybrid project with 1 GW each of solar and wind capacity. This is in addition to the 160 MW solar-wind hybrid project tenders already launched by the organisation.

Offshore wind has opened another avenue for wind power development in the country. There is significant offshore wind potential in India, given its vast coastline of over 7,000 km. As per the latest feasibility studies undertaken by the Facilitating Offshore Wind in India consortium, Gujarat and Tamil Nadu together hold an offshore wind potential of around 200 GW (100 GW each) across eight potential development zones. Offshore wind projects offer various advantages over onshore ones such as higher wind speeds and availability of larger area for setting up large projects. However, the cost of setting up offshore wind projects is 25-30 per cent higher than that for onshore projects. Recently, the MNRE has invited global expressions of interest for setting up an offshore wind farm in Gujarat. The farm is proposed to be located 23-40 km seaward from Pipavav port, in the Gulf of Khambhat, where the average wind speed is 8.2 metres per second. Another avenue for augmenting wind power capacity in the country is through repowering of existing wind power projects. In 2016, the MNRE released the policy on the repowering of wind power projects, which lays down the procedure and conditions for repowering wind turbines of 1 MW and below capacity. The repowering projects are eligible for an additional interest rate rebate of 25 basis points on loans from the Indian Renewable Energy Development Agency, as well as other fiscal and financial benefits available for new wind projects. 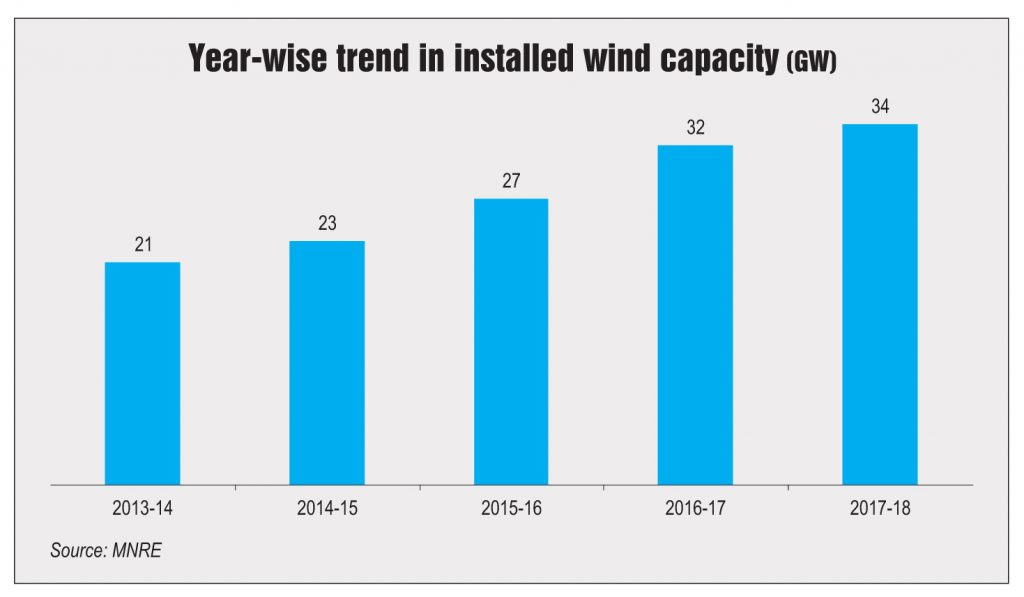 In order to promote large-scale wind power development, a number of challenges need to be addressed. One of the key issues facing the segment is the cancellation/renegotiation of PPAs by the state discoms, which has adversely impacted developers’ confidence in the segment. Besides, developers face delays in obtaining payment from the discoms and land acquisition approvals. To this end, a single-window clearance mechanism for wind projects needs to be implemented effectively.

The government has been making efforts to promote the wind power segment in more than one way. These include waiver of interstate transmission charges for wind projects, introduction of policy guidelines for solar-wind hybrids, and promotion of offshore wind plants. Around 3 GW of wind capacity is expected to be added in 2018-19, a little less than the set targets. Going forward, it is likely to either exceed or meet the annual targets to achieve the 60 GW goal by 2022.