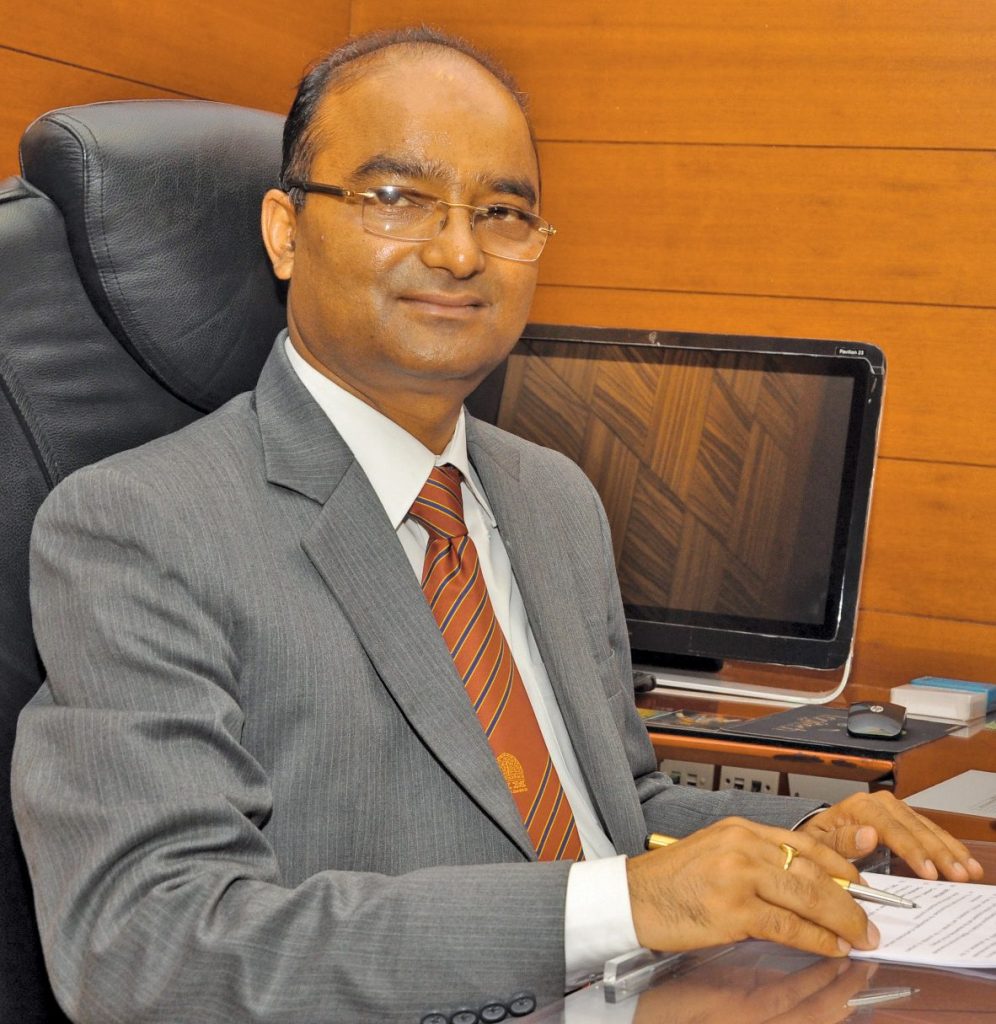 The hydropower segment can benefit from policy and regulatory initiatives such as reducing tariffs, hydro purchase obligations and innovative financing products, believes N.L. Sharma, chairman and managing director, SJVN Limited, one of India’s biggest state-run hydro companies. In an interview with Power Line, Sharma spoke about the state of the sector, SJVN’s growth strategy and the challenges ahead…

How has the hydropower segment’s performance been in the past year or so?

Despite a huge potential of 148 GW, the growth of the hydropower segment has been rather sluggish and only about 44 GW has been exploited so far. As a result, the overall contribution of hydropower to the generation mix has declined from about 50 per cent five decades ago to less than 14 per cent today. The growth in hydro generation has not kept pace with the overall power scenario, especially the thermal power generation segment. There was an 8.5 per cent slack in hydro generation (against the set target) in 2016-17, followed by a marginal revival with a growth of about 3 per cent in 2017-18.  It is important to understand that the hydro segment is complex and poses challenges unique to its nature. About 30-35 per cent of our hydro output comes from large reservoir-based  stations and their functioning is dependent on rainfall. The remaining output is from hydro schemes that are contingent upon snow-fed rivers. So, there is always heavy dependency on weather and unfortunately over the years, weather cycles have been erratic. Besides, hydro generation is highly capital intensive and faces a host of environmental and regulatory challenges.

Having said that, hydro generation is one of the most preferred options to manage the intermittent nature of renewables in view of its quick start-up time. In times to come, renewables are perhaps the only way forward and hydropower will play a key role. Also, hydropower generation does not involve any consumables and being fossil fuel-free, it is inflation-free.

What are the steps needed to accelerate segment growth? What are your views on the proposed hydro policy?

The segment is grappling with a plethora of challenges; however, these issues can be dealt with effectively through socio-political intervention and an appropriate regulatory framework. Simplification of environment and forest clearance procedures is crucial. Regulatory processes need to be expedited and interventions like a single-window clearance system could be devised. There have been major policy interventions such as renewable purchase obligations (RPOs) to boost renewables. The same treatment could be extended to the hydro segment in the form of hydro purchase obligations. A regulatory framework for differentiated peak and off-peak tariffs will further incentivise hydropower. The smart grid concept that could be a reality very soon will make such regulations very effective and easy to implement.

Hydro projects need specialised and innovative financial products like tax-exemption bonds that are focused on the hydro segment. Providing maximum interest subvention during construction (a maximum of seven years) and a three-year post-commercial operation date to all hydro projects will further boost development. Some measures could also be taken to reduce hydro tariffs and promote the financial viability of projects. These include changing or rationalising other tariff parameters such as depreciation, and operations and maintenance expenses; excluding the cost of enabling infrastructure from project cost for the purpose of tariff calculations; and reimbursing the same from the appropriate funds of the concerned entities. If the appropriate commission may increases the useful life of the project from the present 35 years to 40 or 50 years, which is in fact more rational, it would help in reducing tariffs even further. Subsequently, more projects will cross the financial viability ceiling and thus hydropower capacity will increase.

In order to bring down survey and investigation time and cost, there is a lot that the state governments can do in terms of undertaking preliminary work. For example, they can undertake river basin development optimisation studies; prepare a comprehensive catchment area treatment plan; and the necessary infrastructure such as approach roads before project allotment. The state governments could set up empowered committees for land acquisition. Further, river development authorities, with adequate legal powers and representation from the state governments, could be set up. However, it must be ensured that they don’t add to another clearance window.

SJVN endorses the draft hydro policy as it entails several initiatives for the revival of the segment. Initiatives like providing 4 per cent interest subvention during construction; creating a Hydropower Development Fund; long-term lending at affordable interest rates by banks and financial institutions (including the Power Finance Corporation and the Rural Electrification Corporation); and the Central Electricity Regulatory Commission’s guidelines aimed at reducing tariffs, will go a long way in boosting the hydropower segment. As a power sector utility, we welcome the policy.

What have been SJVN Limited’s key business highlights in the past one year?

SJVN has expanded its horizons and has developed into a fully diversified transnational power sector company that is capable of dealing with all types of conventional and non-conventional forms of energy along with power transmission. All three operational projects of the company are delivering excellent performance. We surpassed our generation target and our normative annual plant availability factor target levels, and we received an “excellent” MoU performance rating in 2015-16 for the fifth year in a row. The net profit for 2016-17 showed an almost 10 per cent increase and we paid our shareholders the highest dividend ever of Rs 2.75 per share. Our financials have always been sound and in the past few months our business has achieved some really important milestones. The Cabinet Committee on Economic Affairs has very recently approved the proposal and investment for the 900 MW Arun–3 hydroelectric project (HEP) located in Nepal. Three construction packages of the project have already been awarded. In addition, civil works for the 60 MW Naitwar Mori HEP located in Uttarakhand have been awarded. Our projects in Himachal Pradesh are also expected to start construction very soon. We had already commissioned a 5 MW solar photovoltaic project at Charanka, Gujarat, back in March 2017. Our business has reached a stage where two to three projects will be in the construction phase at the same time; thus, I can say that the company is heading towards unprecedented exponential growth.

What is SJVN’s targeted capacity addition in the next two to three years?

SJVN currently has eight HEPs in its portfolio that are undergoing survey and investigation in India and abroad, with a combined installed capacity of more than 2,250 MW. All these projects will be commissioned progressively in the coming years. We also have three projects – the 900 MW Arun-3 HEP, the 60 MW Naitwar Mori HEP and the 50 MW Sadlawind power project in Gujarat – which are at the construction stage, apart from the 600 MW Kholongchu HEP in Bhutan, being executed in the joint venture (JV) mode. These projects have construction periods varying from 48 months to 60 months. As of now, our focus remains on leveraging our core strength, which is hydropower development, and building capacity and capability for renewables.

What are the opportunities being pursued by the company in overseas markets?

SJVN has made its mark as a transnational hydropower company after winning the Arun–3 HEP through global competitive bidding. For evacuation of power, SJVN is executing a 217 ckt. km, 400 kV transmission system. The 600 MW Kholongchu HEP is being executed in joint venture mode with the Royal Government of Bhutan. We also have another project in Bhutan, the 600 MW Wangchu HEP. This will be executed through the JV route as well, for which the signing of a shareholding agreement is awaited. SJVN is also a JV partner with other Indian power sector utilities as well as the Nepal Electricity Authority for power trade between Nepal and India.

What is your outlook for the power sector and what will be SJVN’s role in it?

Multiple drivers such as industrial expansion and growing per capita incomes are leading to an increase in power demand. This is set to continue in the coming years as India is on its way to becoming a global manufacturing hub. State regulations and schemes such as UDAY and Saubhagya have also contributed significantly to the rise in power demand. Given such a scenario, the demand for electricity is expected to increase at a compound annual growth rate of 7 per cent to 1,894.7 TWh by 2021-22. Grid modernisation is soon going to become a reality.

Overall, in the coming years, major transformations are expected in the power sector. The shift from fossil fuels has already taken place. We, as power sector utilities, must ensure that our people, systems and business processes are preparing themselves for these imminent changes. Recent regulatory reforms like the proposed hydro policy and other state initiatives to boost renewable capacity will surely go a long way in meeting the dual challenge of rising power demand and technological shifts. SJVN is certainly going to leverage these new regulations. As an organisation, we have always believed in innovation and   keeping ourselves abreast of technological shifts and changing environmental scenarios. The times ahead are going to bring tremendous growth opportunities, but they will come along with challenges unique to their nature. We will have to resort to dual-fold innovation – incremental innovation must be displayed in doing what we are doing now, more efficiently and more effectively; at the same time, we must strive for disruptive innovations and become the prime trigger for technological and system advancements. The key is to set one foot firmly in the present and simultaneously endeavour to place the other firmly in the future. This is what will differentiate the power market leaders from the followers.