MGVCL’s transmission and distribution (T&D) losses were over 11 per cent as of March 2017, and are currently 9.8 per cent. MGVCL has a 38 MW rooftop market and the number of such consumers, especially in city areas, is increasing each day. Such consumers have been provided with a net metering facility, which enables them to provide data on power import and export, utilisation, etc. They are also being given connections as early as possible.

Currently, aggregate technical and commercial (AT&C) losses are 12.38 per cent, with the target for 2018-19 set at around 8.5 per cent. However, meeting this target is expected to be a huge challenge for the discom, as areas where losses are still high require police protection, which is currently limited.

Another challenge for the discom in controlling losses is that the discom’s area also includes scattered villages where consumers are prone to illegally tapping the distribution networks. Hence, in these parts, MGVCL has implemented the aerial bunched network for its LT distribution networks. Further, the removal of connections is being undertaken in areas where customers have accumulated arrears. In certain cases, lines are being disconnected so as to prevent malafide use. Apart from these measures, the timely maintenance of distribution transformers is also being done to improve network reliability. 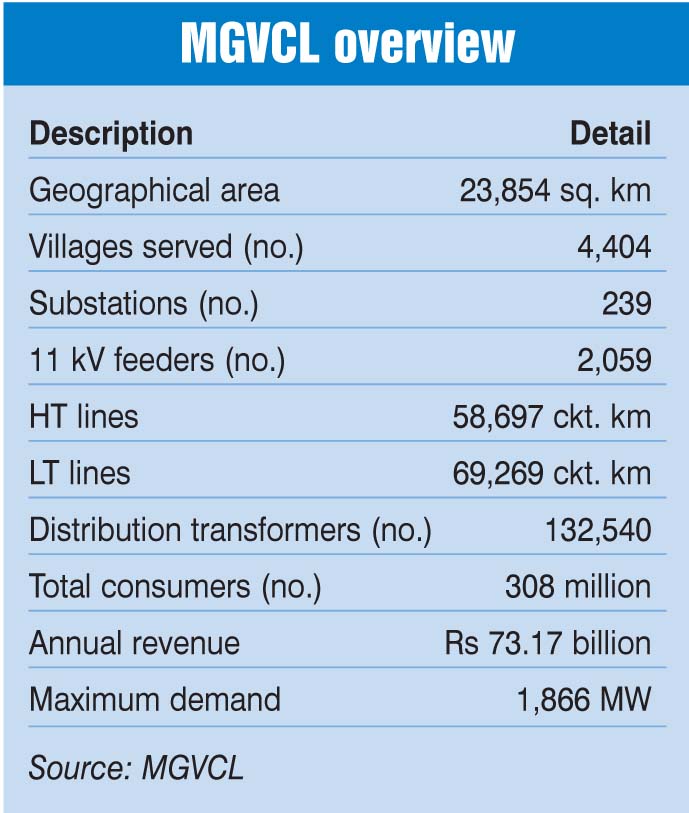 One of the projects currently under way by MGVCL is a dynamic reactive compensation project for improving the voltage profile of the grid. For this, around 574 capacitors of 3×200 kVAR capacity are being installed on 11 kV feeders. So far, 100 capacitor banks have been installed at different locations and the installation of the remaining capacitors is in the pipeline.

Once fully implemented, the project would enable compliance with the grid code. As per the Electricity Grid Code, 2013, distribution licensees are required to maintain a power factor of not less than 0.9 lag. The project would also eliminate manual intervention and all actions for controlling the power factor will be automated. The Gujarat Energy Transmission Corporation is the other identified beneficiary of the project, along with MGVCL.

In the future, MGVCL is also planning to implement a pilot smart gridproject. This would enable enable two-way communications and hence, be capable of monitoring and responding to everything from changes in power plants, customer preferences to even individual appliances. The key features of the envisaged smart grid would be smart meters; integration of solar, wind and other renewable sources; forecasting demand and supply; a self-healing network; demand-side management; real-time balancing; etc.  However, regulatory issues due to the high cost of smart meters (which would impact consumers) and cybersecurity issues are need to be taken care of.

Recently, MGVCL has communicated a demand for 15 million smart meters to Uttar Gujarat Vij Company Limited, a tender for which has already been published.  The installation of approximately 32.6 million smart meter is currently under progress. With this project, the discom expects AT&C losses to decrease to 5 per cent, and the transformer failure rate to reduce to about 8 per cent.

In addition, the inadequacy of reactive power compensation at load points has resulted in the drawal of reactive power from the upstream network, ultimately leading to poor voltage profile at the extra high voltage (EHV) level. Although it is mandatory for consumers to provide capacitors on each agricultural pump load, it is either not provided, or if provided, not maintained by the consumers once it fails. There is no monitoring mechanism with the state utilities to monitor the functioning of these capacitors.

The 11 kV feeders are also long, extending over 50 km in length. As a result, there are low voltage conditions on almost all  long-length agricultural feeders. Low voltage conditions, coupled with a poor power factor, are leading to ampere loading on agricultural feeders crossing the design capacities. Hence, huge investments are required for the reduction of transmission losses (of 4 per cent) while technical losses on the distribution side (12 per cent) can be substantially reduced by the improvement of power factor. 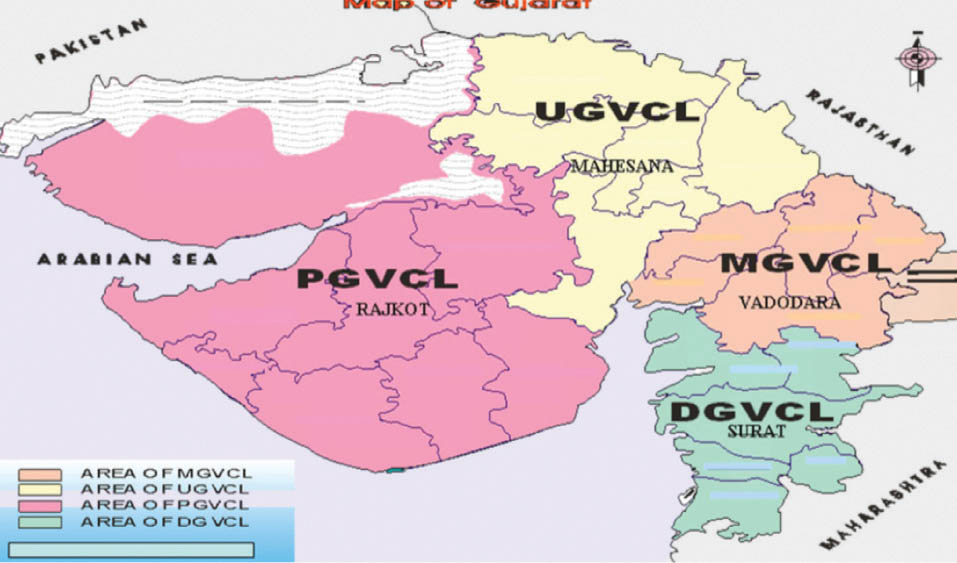 A  Supervisory control and data acquisition upgradation project is currently being implemented at Vadodara by the discom, which is expected to be completed in the next three to four months. The project will enhance grid visibility and create robust distribution automation. The project is being implemented under the Integrated Power Development Scheme for power supply improvement in the city areas.

MGVCL is currently implementing the Suryashakti Kisan Yojana (SKY) as well. For this project, 11 of the discom’s feeders have been included as part of the pilot project under SKY.

Meanwhile, regarding grid modernisation, the discom is looking at a number of other solutions along with including an advanced distribution management system. This would allow higher reliability, improved voltage control and better distribution of resources. Another step required for improving reliability is fault location, isolation and service restoration, where automated circuit switching will identify and isolate faults, and restore power supply automatically. This will also improve customer experience and overall employee safety. Another initiative for grid modernisation is integrated volt-var optimisation, under which capacitors are installed for better power quality.

MGVCL’s strategies and initiatives are evidently expected to support its transition to becoming a modern utility, with more responsive operational systems and customer-centric performance.

Based on inputs from a presentation by T.C. Choksi, Chief Engineer, MGVCL, at Power Line’s recent workshop on Grid Modernisation in Vadodara