Out of the 62 million tonnes of waste generated annually in the country, over 80 per cent is disposed at dumpsites in an unhygienic manner. With the growing urban population, environmental concerns and stressed resources, there is an urgent need to address the issues preventing the effective and efficient disposal of India’s municipal solid waste (MSW). Waste-to-Energy (WtE) technologies provide new and sustainable methods for generating electricity while helping to get rid of MSW.

The process of converting MSW into electricity or gas is possible through technologies such as incineration, biomethanation, etc. Each type of energy generation technology uses different components of MSW such as dry waste, wet waste, food waste or sewage, which acts as a “fuel” for electricity or heat production. One such variety is refuse-derived fuel (RDF), which is typically used in incineration-based WtE plants.

RDF is derived from combustible waste, which is a fraction of solid waste like plastic, wood, pulp or organic waste, and is produced by drying, shredding, dehydrating and compacting solid waste. RDF can be employed as a fuel substitute in boilers of conventional thermal power plants or cement kilns and can be burnt to generate steam and electricity. According to a 2014 report by the task force on WtE, untapped waste could have a potential to generate 440 MW of power in India from 32,890 tonnes per day (TPD) of combustible wastes including RDF.

As per a recent study undertaken by the Indian Council for Research on International Economic Relations, there were only eight RDF production plants operating in the country, with a total capacity to process around 3,330 TPD of waste. Power Line takes a look at the WtE segment with a focus on RDF as an upcoming and clean energy generation technology…

Any RDF-based WtE plant’s output efficiency is linked directly to the degree of waste segregation. Waste with a high calorific value needs to be separated from wet waste, recyclable waste and non-combustible waste to ensure proper incineration and to regulate emissions. Further, due to a high percentage of inerts, it becomes necessary to process the waste to make it suitable for use as fuel. Worldwide, MSW-to-energy generation has been found to be quite successful in areas with high levels of segregation at the source due to a number of factors. Segregation at the source not only increases the heat content of RDF but also reduces labour, additional equipment and the transportation of waste costs. In addition, it allows for faster processing and transport of the waste.

The production of RDF from MSW involves two components – sorting and shredding. Sorting is done to remove recyclable waste such as glass and plastics, iron, aluminium, organic waste, and non-inflammable and high moisture containing waste. The sorting process can be manual or mechanical and is based on the density and/or size of the material. In addition, sorting is done using processes such as particle screening, gravity separation, infrared screening and magnetic separation. The remaining waste, which is high in calorific value, is called RDF and is further crushed and sized suitably for efficient combustion. RDF can then be processed into briquettes, pellets or fluff, as per the requirement of the furnace.

Incineration-based WtE projects require less time for fuel processing and provide a simpler power generation solution, unlike biomethanation. The municipal corporations are, therefore, open towards the adoption of this technology. As of April 2018, there were only 8 RDF-production plants in the country. However, many municipalities have announced plans to set up RDF production and WtE plants, and are in the process of conducting feasibility studies.

WtE projects have gained momentum over the past few years after the announcement of the Swachh Bharat Mission (SBM) and the Smart Cities Mission. Under SBM (urban), the Ministry of Housing and Urban Affairs is offering a grant/viability gap funding equal to 35 per cent of the total project cost for MSW management projects to provide a thrust to the segment. This involves waste collection, segregation, transportation and disposal including energy recovery.

One of the key promoters of WtE has been the national tariff policy, which has mandated discoms to procure 100 per cent of the power produced from all WtE plants at the tariff determined by the appropriate state commission. The Central Electricity Regulatory Commission has issued the terms and conditions for determining power tariffs from renewable energy sources, under which the generic tariff determined for WtE plants using RDF is Rs 7.9 per kWh. Following this, several states have come up with their own tariffs owing to which ULBs are gradually taking interest in WtE generation through RDF.

The Solid Waste Management (SWM) Rules, 2016 have also given a huge impetus to RDF-based power generation. As per the rules, all non-recyclable wastes with a calorific value of 1,500 kCal per kg or more cannot be disposed in landfills but should be used in WtE plants for preparing RDF and can be used for co-generation of electricity and heat in cement or thermal power plants. Moreover, the SWM Rules mandate that pre-process and post-process rejects should be removed from the processing facility on a regular basis and should not be allowed to pile at the site. The capacity building programme on the implementation of SWM Rules, 2016 states that all industrial units using fuel and located within 100 km of a solid waste-based RDF plant shall make arrangements within six months from the date of notification of the rules to replace at least five per cent of their fuel requirement by RDF. 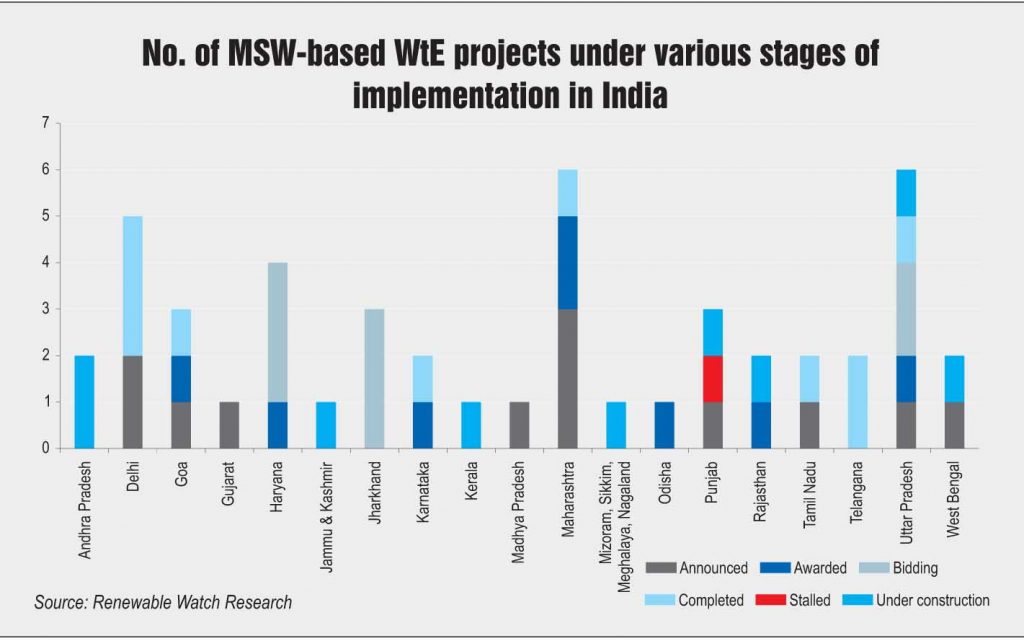 Like several other advanced treatment technologies, RDF plants have also met with initial failures and large-scale adoption of the technology is yet to take-off. Currently, the cost of segregating mixed streams of incoming wastes is very high. In addition, many of the waste processing plants have capacities lower than the waste brought to the plant each day, while a significant number of facilities often operate at capacities lower than the design capacity. This has led to waste accumulation in urban centres, creating problems for local residents and resulting in backlash and protests from them. Emission concerns and hygiene are among the common issues that are raised against the setting up of WtE plants. The opposition to the waste management project in Noida’s (Uttar Pradesh) Sector 123 is the latest example where people have protested against a sanitary landfill site due to its proximity to residential areas, open dumping practices and the absence of an established waste segregation or processing plant.

As per realistic estimates, the municipal waste generated currently in the country has a potential to support 88 power plants of 5 MW each based on incineration, gasification or pyrolysis technologies. According to industry estimates, by 2020-21, about 580,080 TPD of waste generated can be converted into RDF, which can be used as a substitute for coal and lignite to fire industrial boilers. The number of WtE power plants in the country is estimated to increase to 215 by 2031 and 556 by 2050, generating at least 2,780 MW of power. As of May 31, 2018, there are around 48 MSW-based WtE projects under various stages of implementation in India and an increasing number of municipalities are inviting bids to set up waste processing and RDF-to-energy power plants. The recent trends, therefore, indicate that there is a large scope for the growth of the WtE segment.