The woes of Uttarakhand’s hydropower sector do not seem to end. The High Court of Uttarakhand has recently imposed a stay on the construction of all hydropower plants in the state, owing to improper waste disposal practices by developers. This is in line with the notification of the Ministry of Environment, Forests and Climate Change (MoEFCC) released in December 2012, prohibiting the development of hydroelectric projects (HEPs) in the Bhagirathi eco-sensitive zone, and the Supreme Court’s blanket ban on HEP construction following the flash floods in June 2013. The order will impact an estimated 1,490 MW of HEPs (above 25 MW) that are under construction in the state, as of June 2018. The current development comes as a major setback to the state government, which is striving to revive Uttarakhand’s hydropower sector.

The high court passed an order on June 11, 2018, in response to a public interest litigation filed by the Himadri Jan Kalyan Sansthan, which alleged that that the debris from the HEPs was being dumped in the rivers to reduce transportation costs, thereby obstructing their flow and damaging the ecology. The bench noted that the waste was not being disposed of at the sites identified by the MoEFCC and the Uttarakhand Environment Protection and Pollution Control Board (UEPPCB). “The need of the hour is sustainable development. The companies involved in HEP construction cannot be permitted to use the rivers as dumping sites. The dumping sites are to be specifically provided for, and muck and excavated material can only be stacked/stored away from the river banks,” it stated.

The court has ordered the authorities to ensure that at least 15 per cent of water stored in dams is released downstream into rivers. It has directed the MoEFCC and the UEPPCB to identify suitable muck disposal sites 500 metres away from river banks within three weeks from the date of order. The district magistrates across the state of Uttarakhand have been directed to ensure that no debris is dumped into the rivers by any HEP developer or other construction companies. Further, the environment and forest clearances for existing and upcoming projects must be subject to the provision of muck disposal sites, and necessary actions must be taken against offenders. 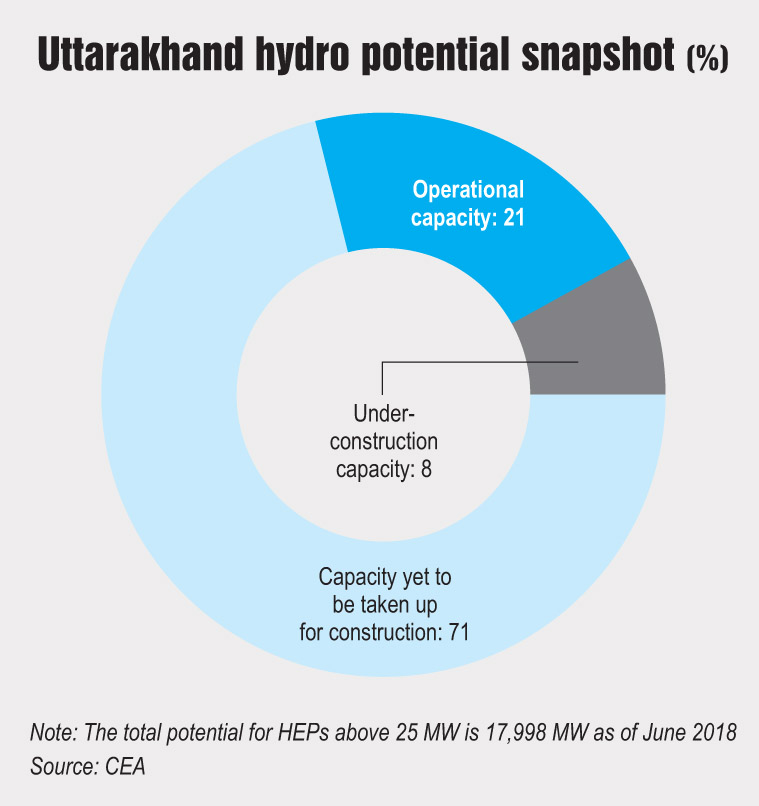 In recent months, the Uttarakhand government has been actively seeking the central government’s intervention to boost hydropower generation in the state. The state is specifically seeking clearances for 10 small-hydro projects (SHPs) aggregating 82.5 MW located in the Bhagirathi eco-sensitive zone. The projects are stuck since the MoEFCC’s notification in December 2012, as per which a 100 km stretch of the Bhagirathi river from Gaumukh to Uttarkashi covering an area of 4,179.59 square km was declared eco-sensitive. Thus, only HEPs up to 2 MW can be built in the region. The state government is seeking a relaxation to this provision for building projects up to 25 MW. The 10 projects being pushed by the state government were approved prior to the MoEFCC’s notification. Most of these are being developed by the Uttarakhand Renewable Energy Development Agency and Uttarakhand Jal Vidyut Nigam Limited.

According to the state government,  investments of around Rs 410 billion are stuck due to the stalled HEPs in Uttarakhand. Following the disastrous flash flood in the state in 2013, the expert committee appointed by the Supreme Court recommended scrapping 23 hydropower projects in the Alaknanda and Bhagirathi river basins. The scrapped HEPs include 14 large hydropower projects aggregating 2,731 MW and eight SHPs aggregating 123.6 MW.

In November 2017, the state government sought support from the MoP, the MoEFCC and the Ministry of Water Resources, River Development & Ganga Rejuvenation, requesting them to submit a joint affidavit before the Supreme Court for clearance of 33 power projects proposed in the Ganga river basin in Uttarakhand. However, no development on this front has been reported so far.

Hydropower development in Uttarakhand has been facing strong opposition from environmentalists for a long time now. This is bound to impact the state’s overall socio-economic development besides increasing power purchase bills. The state government is making efforts to revive the sector. That said, unabated HEP development is not the solution and the violation of rules by project promoters, such as debris disposal into rivers, is only going to widen the rift between developers and environmentalists besides causing irreparable harm to the ecology. The need of the hour is sustainable development while balancing the interests of developers and protecting the environment.