Set up in April 2000, Andhra Pradesh Southern Power Distribution Company Limited (APSPDCL) is one of the two state discoms of Andhra Pradesh. With a customer base of over 11 million spread across eight districts, it is amongst the better performing discoms in India, with aggregate technical and commercial (AT&C) loss levels consistently below 15 per cent for the past six to seven years. As of March 2018, the discom reported a significantly low AT&C loss of 10.99 per cent (as per the Ujwal Discom Assurance Yojana [UDAY] dashboard), even surpassing its target of 11.09 per cent for the year.

Besides network addition and capacity augmentation, a slew of customer-centric initiatives have been implemented by the discom in recent years such as spot billing, centralised billing systems, shift to smart meters,  mobile apps for consumers, digital payment gateways, etc., which have improved the discom’s billing and collection efficiency and are improving the state’s power supply. “We are supplying 24×7 electricity to all consumers except agricultural consumers,” says MM Nayak, CMD, APSPDCL. 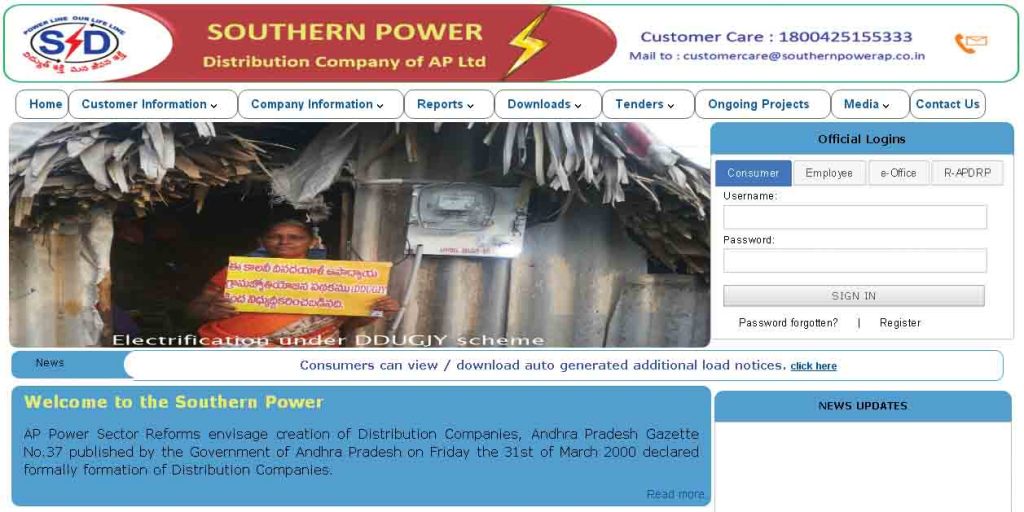 APSPDCL currently serves a consumer base of over 11.37 million. Initially, the discom was formed to serve six districts – Krishna, Guntur, Prakasam, Nellore, Chittoor and Kadapa. However, after the bifurcation of the erstwhile Andhra Pradesh into the two new states of Andhra Pradesh and Telangana in June 2014, Anantapur and Kurnool districts were added to APSPDCL’s purview, taking the total area served by the discom to 118,119 square km.

A number of practices have been adopted by APSPDCL to reduce technical and commercial losses. For reducing technical losses, the utility has augmented the number of power transformers and DTs, besides maintaining 11 kV feeders at an optimum level as well as proper earthing and load balancing. It has also reduced power interruptions and breakdowns by using covered conductors and underground cables. Further, capacitors have been installed at the consumer’s end. It has identified high-loss feeders and appointed nodal officers to fix them.

The discom has achieved billing and collection efficiency through the use of 5,100 spot billing machines and 5 million Infrared Data Association port meters, which, in turn, has helped reduce commercial losses. The utility also carries out periodic pole-to-pole inspections to check for fraudulent cases. Further, it has replaced all electromechanical meters with electronic, digital and automatic meter reading (AMR) meters. AMR meters have been installed for around 6,087 consumers.

APSPDCL has adopted various IT applications to make the distribution system more flexible and transparent like SAP and a centralised billing system (CBS). The billing activities of 11 million consumers are carried out through the CBS, which is integrated to third-party payment gateways.

The discom has also launched a mobile application for various customer-centric services like paying electricity bills and viewing the consumption/payment history for a 12-month period. Further, it has implemented various digital payment initiatives. Recently, the Bharat Interface for Money (BHIM) app and the Bharat QR mode of digital payment initiatives have been made available to APSPDCL’s consumers for making online bill payments. APSPDCL has also opened the Bharath Bill Payment System for its consumers, which provides instant payment confirmation. Notably, around 67 per cent of the total collection by the discom was received online as of September 2017.

To curb fraudulent activities, APSPDCL has started using the monitoring and tracking system (MATS), a web-based application to capture information related to the theft of energy and to calculate the assessment amount. The system also generates notices like theft complaints, first information report, etc.

The utility has also undertaken real-time feeder monitoring through AMR. Another application, DT tracking system, which is an IT-driven, GPRS-based tracking module, has been developed and implemented to enforce the Andhra Pradesh Electricity Regulatory Commission-specified standard operating procedure for adhering to the timelines for replacing failed DTs. This application captures photographs of the failed DT, the replaced DT and the vehicle transported along with the co-ordinates of the DT structure, and sends it to the server through GPRS.

APSPDCL has implemented the Restructured Accelerated Power Development and Reforms Programme (R-APDRP) Part A (IT) initiative in 46 towns, out of which supervisory control and data acquisition (SCADA) is currently in progress in three towns. Further, as a part of the government’s ease-of-doing business initiative, APSPDCL has come up with a single-desk portal for registering industrial applications wherein consumers can register an application and make payments online through the portal itself.

Meanwhile, under the Integrated Power Development Scheme, regular information on outage management is being provided by the discom through the URJA MITRA app. APSPDCL has provided data for 7,734 feeders (at the 11 kV level) and about 7.5 million consumers to be uploaded on the URJA MITRA app. Also, under UDAY, the target for smart metering has been fixed at 1.35 million in the 200-500 MWh consumer category and 0.34 million in the above 500 MWh category.

APSPDCL has initiated a smart meter pilot project, under which 580 meters are being installed in Tirupati town. Work has already begun and a vendor has been appointed by the discom.

Another recent initiative being implemented is that of grid-connected rooftop solar of 5 MW capacity for LT domestic consumers in Tirupati and Vijayawada. APSPDCL has already commissioned 16,824 (or about 62.63 MW worth) solar agricultural pump sets until June 2018. The company is also in the process of testing internet of things (IoT) technology to improve asset performance through pilot projects. Further, to facilitate the adoption of electric vehicles (EVs), APSPCL has identified various locations in Amaravati, Vijayawada, Guntur, Tirupati and Tirumala for the setting up of EV charging stations. “We are already geared up to contribute to the EV adoption in Andhra Pradesh by proactively planning our projects to support new developments,” notes Nayak.

Issues, challenges and the way forward

While a number of initiatives are being undertaken by the utility, certain issues and challenges persist. For example, under the DT tracking system, a key issue has been the delay in replacement of failed DTs. On the metering front, meters of different makes have been posing problems for the discom as each one comes with a different set of specifications. Linking data communication cable is also a challenge.

Meanwhile, the rising costs of generation are also an obstacle for the discom. The PLF of thermal power plants has decreased from around 80 per cent to 70 per cent in the past four years for AP Genco’s plants. Another factor is the decrease in quality of coal on an average. “These factors along with many others contribute to a rise in costs from these plants which ultimately the end consumer has to bear,” says Nayak. Apart from these, another drawback the discom faces is retaining HT consumers, due to falling power exchange prices.

APSPDCL’s  operational performance is a result of its technology deployment and digitalisation initiatives. Going forward, the initiatives such as smart metering, SCADA and real time feeder monitoring proposed by the discom will ensure that it is able to deliver quality round-the-clock power to its customers.