Hydropower has turned uncompetitive in the past few years, primarily due to a lack of policy support and inherent challenges involved in hydroelectric project (HEP) construction. Inaccessible project locations, delays in environmental clearances, land acquisition and rehabilitation issues, and natural calamities result in significant cost and time overruns in HEPs, leading to high tariffs and virtually no buyers for power. As a result, nearly 21 HEPs with over 6,000 MW of capacity are stalled, while work on 45 projects aggregating 25,000 MW has not yet started, despite the Central Electricity Authority’s (CEA) concurrence.

Of the total 148 GW of hydropower potential, only about 30 per cent has been harnessed so far. Hydropower capacity addition has fallen way behind thermal and renewable. As a result, the country’s hydro-thermal mix has deteriorated over the years, going from 27:73 in 2007-08 to 16:84 at present, which is far below the optimum level of 40:60. However, the steep increase in variable renewable energy generation capacity in recent years necessitates grid balancing, which can be achieved by increasing the share of hydropower capacity. Taking cognisance of this, policymakers have been discussing a revival package for the hydropower sector. In the recent conference in Shimla, Himachal Pradesh, the power ministers announced that a new hydro policy (pending with the cabinet at present) will be launched soon. The proposed policy would have provisions to ease financing to HEPs, scrap free power sale to states and promote offtake through a hydro purchase obligation. In light of these developments, Power Line presents the key trends in the hydropower segment.

The installed hydropower capacity has increased from 38,990 MW in 2011-12 to 45,293 MW in 2017-18 – recording a compound annual growth rate of 2.5 per cent. The installed capacity includes nine pumped storage plants (PSPs) aggregating 4,786 MW, of which only five PSPs totalling 2,600 MW are presently working in the pumping mode.

When compared to thermal and renewable energy, the growth in hydro has been extremely slow. While private sector participation has catapulted capacity addition in thermal generation, renewables have benefited from favourable government policies. As a result, the share of hydropower in the total installed capacity declined from 19.5 per cent in 2011-12 to 13 per cent in 2017-18, while that of thermal has remained the same at around 66-67 per cent and that of renewables has increased to 20 per cent from 12 per cent.

In terms of annual capacity addition, hydropower has consistently failed to meet targets. The annual capacity addition ranged from 500 MW to 1,650 MW in the past five years, which is much lower than thermal or renewables. In 2017-18, only about 795 MW of hydro capacity was added, against a target of 1,305 MW. In contrast, about 8,705 MW of thermal and 11,787 MW of renewable capacity was added during 2017-18.

HEPs are capital intensive in nature and have long gestation periods. In addition to material and financing costs, the site and terrain of the project, size and design of the project and estimated duration of the project (which affects interest costs during construction) also affect overall costs. Further, natural calamities such as flash floods or landslides are common in hilly regions, which can further aggravate capital costs arising from damage to civil works/existing infrastructure. The average capital cost of 41 under-construction HEPs (as listed by the CEA in its Quarterly Progress Report, March 2017) ranges from Rs 65 million per MW to Rs 120 million per MW.

The tariff of HEPs is determined on the basis of a cost-plus approach by the appropriate commissions, as they are exempt from tariff-based competitive bidding until August 15, 2022 as per the Tariff Policy, 2016. In recent years, hydropower tariffs have increased owing to higher capital costs. Amongst HEPs whose tariff is determined by the Central Electricity Regulatory Commission (CERC), the average tariff is estimated to have increased from Rs 2.98 per kWh in 2013-14 to Rs 3.72 per kWh in 2016-17. However, there have been many outliers. For instance, NHPC’s Nimmo Bazgo HEP in Jammu & Kashmir has a tariff of Rs 9.31 per kWh for 2017-18, the Chutak HEP has a tariff of Rs 8.27 per kWh and the Teesta Low Dam project’s (stage III) tariff  stood at Rs 6.20 per kWh. Meanwhile, the tariff for other operational HEPs of NHPC ranges from Rs 1.98 to Rs 5.57 per kWh for 2017-18.

The MoP proposed to introduce a hydropower policy in 2017, but it is yet to be notified. The draft policy proposal has reportedly been recently revised. The new proposal is expected to benefit 33 HEPs aggregating 7,893 MW, while the earlier draft covered 40 projects totalling 11,639 MW. Under the proposed policy, MoP plans to set up a hydropower development fund (HPDF) to provide capital support in the form of interest subvention. There is also a proposal to bring all HEPs, irrespective of size, under the ambit of renewable energy, in order to revive interest in the sector by providing subsidies, tax benefits and other incentives to developers. Further, capital subsidy is expected to be provided to public sector HEPs through an escrow account to ensure the repayment of bank loans. In addition, to promote power offtake from HEPs, discoms would get funds from the central government for signing hydro power purchase agreements (PPAs) for at least five years. 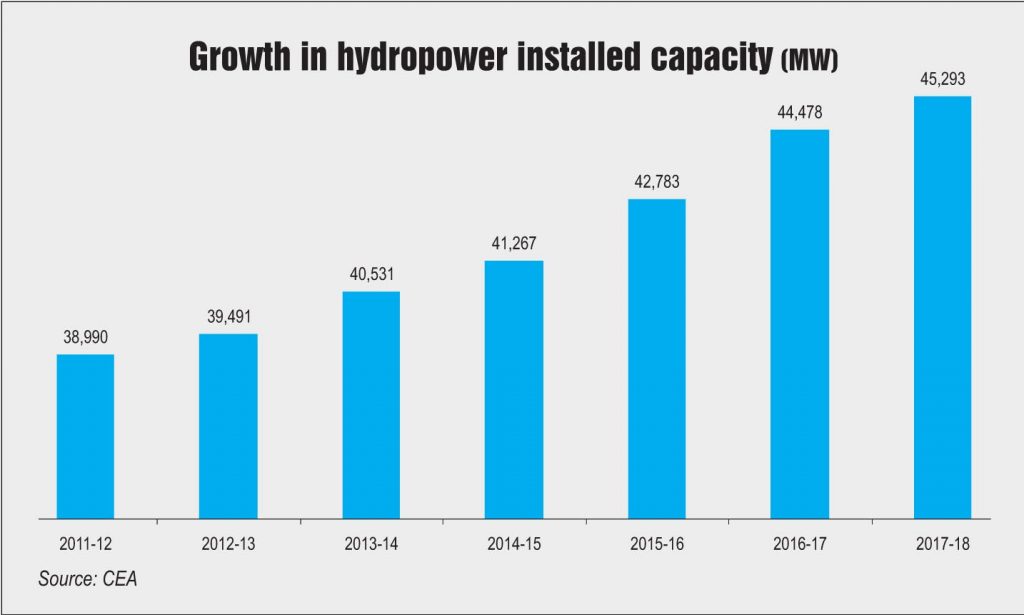 India has engaged with Nepal and Bhutan for cross-border trade of hydropower for decades. As India has become more self-sufficient in power, its power import from Bhutan has declined from 5,290 MUs in 2007-08 to 486 MUs in 2017-18. However, now with the aim of creating a regional electricity market in South Asia and the release of the MoP’s cross-border trading guidelines in 2016, hydropower trading with the neighbouring countries is expected to increase. Several bilateral agreements have been signed in this context and Indian developers are assisting in hydropower development in Nepal and Bhutan. Around 10 bilateral projects with a combined capacity of 10 GW are being developed in Bhutan, which has a potential for 30 GW, by 2025.

Among the significant cross-border projects currently under way are SJVN Limited’s 900 MW Arun III HEP in Nepal and the 600 MW Kholongchhu HEP in Bhutan (in joint venture mode with Bhutan’s Druk Green Power). Further, a consortium comprising the GMR Group and the Italian-Thai Development Project Company is developing the 300 MW Upper Karnali project and the 600 MW Upper Marsyangadi HEP in Nepal.