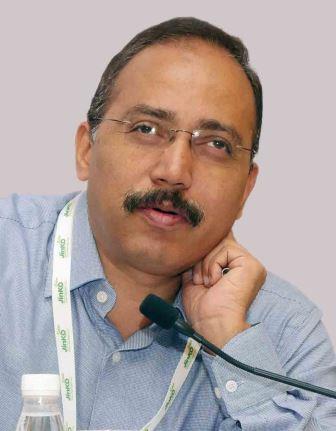 “Tariffs are expected to reduce further”

The year 2018 has been a positive one for the solar power segment, with the installed capacity achieving a milestone of 22 GW. Tendering activity has been at an all-time high, with about 30 GW of solar capacity tendered by the Solar Energy Corporation of India (SECI) and other state-level agencies in the first half of the year. At the 11th annual Solar Power in India conference organised by Power Line, Jatindra Nath Swain, managing director, SECI, spoke about the planned solar trajectory, tariff trends, the key challenges and the way forward. Excerpts…

SECI was established in 2011 as an implementation arm of the Ministry of New and Renewable Energy (MNRE) to work towards the National Solar Mission. SECI’s work actually began in 2015 with an increase in the solar power target from 20 GW to 100 GW by 2022. A bundling scheme was then introduced under which more expensive solar power was to be bundled with cheaper thermal power and sold to the discoms. This was followed by the viability gap funding (VGF) scheme, under which a fixed tariff was set and developers were asked to bid for any VGF that was required to make the targeted tariff operative. However, by the beginning of 2017, the VGF scheme lost its relevance, since the tariffs for most of the bids were way below the targeted tariff levels.

Low solar tariffs began with the Rewa project and then went on to become a trendsetter for the Bhadla project. The declining cost of solar equipment, primarily of solar modules due to high market expectations, led to a fall in tariffs. It was also partly driven by greater transparency in bids. Other factors like de-risking of solar projects in the form of early power purchase agreements (PPAs) and payment security mechanisms also contributed to lower tariffs.

This trend was seen in the second bid for the Bhadla project as well, despite confusion regarding the safeguard or anti-dumping duties. The entire confusion led to many tenders being postponed, out of which a few are now finally being auctioned, including SECI’s 2 GW tender. The recently concluded bids for solar parks saw slightly higher tariffs of around Rs 2.72 per unit as in the case of NTPC’s Anantapur and Rs 2.82 per unit in SECI’s Pavagada solar parks. The Uttar Pradesh solar park bids saw higher tariffs mainly due to issues of accessibility, terrain and lower solar insolation. However, going forward, solar tariffs are expected to follow a downward trend provided no major policy or regulatory changes take place.

SECI has extended the project completion timeline to 21 months for regular projects and 24 months for larger projects in non-solar park areas to address the difficulties faced by developers in aggregating land, getting connectivity and obtaining approvals. Tariffs are expected to reduce further once the uncertainty in project completion is cleared.

The ministry has set a trajectory for installing 30 GW of ground-mounted solar both in 2018-19 and 2019-20 so that the target of 100 GW can be reached by 2022, with a project completion time of 18-24 months. Out of the 30 GW per year, SECI has been mandated to deliver about 18 GW while NTPC will cover 6-10 GW and some of the capacity will be bid out by various states. The remaining capacity will come through schemes that are still in the pipeline, like KUSUM (Kisan Urja Suraksha evam Utthaan Mahabhiyan) or the central public sector undertakings scheme, with an average of 3-4 GW scheduled to be tendered out every year.

As far as participation is concerned, the group of developers that keep bidding in SECI’s tenders are expected to stay. SECI now intends to include an upper limit of 50-60 per cent of the total bid capacity, depending on the way the transmission has to be led, keeping in mind the limits or parameters laid down by connectivity. The upper cap is kept to ensure more participation, instead of just one or two parties. However, it will be driven by the MNRE’s directive in the future. SECI has also received enquiries from a few new parties, mostly from abroad, which may like to participate in the bids. Some manufacturers have also come forward either directly or in collaboration with developers with whom they would like to participate in future tenders.

There are two major constraints to be considered in the solar project space – land and connectivity. There is significant transmission potential and unused capacity of the central transmission utility and bids are mostly called for the available substation capacity. However, recently, Rajasthan, western Uttar Pradesh and Gujarat have become more popular because interstate transmission charges have been waived and solar insolation is considered to be better in these areas. Normally, setting up a new transmission network takes 24-36 months. However, SECI has been requesting the power ministry to shorten the implementation time of laying the transmission network.

Aggregation of land in some states is a challenge, primarily because of the land ceiling acts. The main objective of these acts, promulgated in 1961, was to ensure that land was available for agriculture to a larger chunk of the working population. Most of the state acts are similar, since they all followed from the central act.

Since most of the solar projects are situated on dry unirrigated land, the limits of the ceiling vary from 50 acres to 60 acres for a single entity. Solar projects usually exceed this limit, thus needing a ceiling exemption, which is quite challenging to obtain in some states like Karnataka and Maharashtra. The entire process is cumbersome and difficult. It starts with the developer providing a list of landholdings that are to be acquired above the ceiling limit. Since land records are less than perfect, there is often confusion about the identity of the owner or a change in litigation, which sends the whole proposal back for verification.

Apart from land and connectivity, there is a third constraint of demand. Energy demand might not be enough for installing 100 GW of solar. So far, low tariffs have led to a good response from the states and most of SECI’s tender capacities have been booked. However, this may change in the future when greater capacities are offered by SECI and NTPC, while demand remains the same.

Lower tariffs will mitigate the issue of lack of demand to some extent only. However, there needs to be a marketing initiative in the form of giving firm power, even though it has been a sellers’ market so far. This may be in the form of trying to bundle it with battery storage in order to provide peak power to consumers and improve the marketability of the product.

The MNRE’s official statistics for rooftop solar installation indicate that 1 GW has been installed, while industry sources claim this figure to be 2 GW. An explanation for this could be that some large industrial and commercial installations do not get reported to the MNRE since they do not take any subsidy.

The MNRE is in the process of revamping the rooftop solar implementation plan from 40 GW to 10-15 GW in the next two to three years. This is attributed to issues like ignorance of the distribution companies about the impact of solar installations and limited sanctions for rooftop projects. Other issues include the possibility of too many players in the market. Customers also have some apprehensions regarding performance issues over a period of 20-25 years. This is mainly a problem with the small rooftop sector, since the larger sector is more inclined towards doing proper due diligence.

SECI expects that when people see more rooftop projects being set up in their neighbourhood, the demand for solar rooftops down the line may pick up. Some discoms, like the one in Kerala, are taking the initiative to conduct bids for rooftop solar projects, while others are expected to follow. SECI will continue to participate in the rooftop segment, more specifically in larger rooftops. While some programmes are currently up and running, any new initiatives will depend on the MNRE’s upcoming policies.