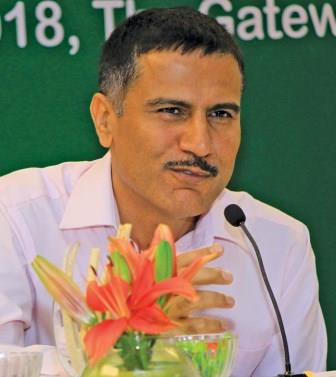 Driven by a conducive policy framework, Gujarat’s renewable energy sector has shown remarkable growth, increasing by almost 6 GW in the last decade or so, bringing the total share of renewables in the state’s installed capacity to 27 per cent. With the state planning to increase the share of renewables to 40 per cent by 2030, a strong and modern grid is imperative. At a recent workshop on “Grid Modernisation in Gujarat” held by Power Line in association with Schneider Electric India in Vadodara, Pankaj Joshi, managing director, Gujarat Urja Vikas Nigam Limited (GUVNL), shared his views on the state’s plans and priorities…

Gujarat’s power sector has witnessed significant developments since the unbundling of the Gujarat Electricity Board in 2005. Today, we have one holding company, GUVNL and six subsidiaries, of which four are in distribution, one in generation and one in transmission. Our journey started with an accumulated loss of Rs 80 billion in 2005. Last year, we generated a surplus of about Rs 5.5 billion. Our six subsidiaries have been generating surpluses consistently for the past 10 years.

Gujarat is a power-surplus state, with an installed capacity of around 27,000 MW. Of this, the installed capacity from conventional sources is around 19,500 MW, while renewables contribute to around 7,500 MW, which includes 5,500 MW of wind power and 1,700 MW of solar power. Across states, Gujarat comes second in terms of installed wind capacity and sixth in terms of installed solar capacity. In the past 10 years, around 16,000 MW of capacity was added in the state, which included around 10,000 MW from conventional sources and around 6,000 MW from renewables.

Gujarat was the first state in the country to develop a state-of-the-art solar park (at Charanka in northern Gujarat).  This park has a potential of 850 MW, against which 700 MW of capacity has already been made operational. The state is developing two more solar parks, one at Radhanesda with a capacity of 750 MW and the other at Harshad of nearly 500 MW.

During 2017-18, the state tied up 1,000 MW of capacity through competitive bidding. Power purchase agreements (PPAs) were signed for 500 MW of wind power at a price range of Rs 2.43 to

Rs 2.45 per unit. The Rs 2.43 per unit bid, which we received for wind-based projects, is in fact the lowest in the country.

Another 500 MW of solar capacity has been tied up at Rs 2.65 to Rs 2.67 per unit through reverse auctions. To recall, in 2010, the state had paid a feed-in tariff of almost Rs 15 per unit to the capacity allocated by the government to solar developers. We expect tariffs to come down further in the short and medium term.

On June 23, 2018, the state’s chief minister launched a new scheme, Surya Shakti Kisan Yojana, wherein farmers can generate electricity using solar panels and sell the surplus power generated to the grid. Under the first phase of the scheme, grid-connected solar panels will be provided to over 12,000 farmers and will cover 137 feeders in 33 districts of the state. The scheme would provide farmers with 12 hours of power supply for agricultural pumps during the day. Moreover, farmers can sell the surplus power to discoms and earn significant amounts from such sales. The scheme has been devised in a way that farmers get their investment back (around 5 per cent of the total project cost) within 8-18 months. Based on the success of the pilot, the scheme is likely to be extended to cover the remaining 7,000 agricultural consumers, covering 1.45 million farmers.

The state is currently catering to around 17 million consumers, of which 14.5 million are catered to by state-owned discoms and the remaining 2.5 million are catered to by private discoms. We have already achieved 100 per cent village electrification in 2007-08. Further, in 2013-14, we also achieved 100 per cent household electrification. The state’s focus is now on electrification of hamlets, which are in scattered pockets and habitations.  We are committed to providing quality and reliable power to all our consumers.

The aggregate technical and commercial (AT&C) losses have come down to around 12-13 per cent at present, against the Ujwal Discom Assurance Yojana’s trajectory of around 14.5 per cent. In urban areas like Vadodara city, AT&C losses have come down to less than 5 per cent. The average cost to the consumer in Gujarat is around Rs 6.02 per unit, while the average revenue realisation per unit is around Rs 6.10. Therefore, we generate a surplus of 7-8 paise per unit.  Gujarat discoms are perhaps amongst the few discoms in the country to generate such a surplus.

Renewable energy is the future for Gujarat. The state’s vision is to have 40 per cent capacity from renewable sources by the year 2030, which is equivalent to around 23,000 MW of renewable energy. We aim to add 1,000 MW of wind power and 2,000 MW of solar power every year through competitive bidding.

A conducive regulatory framework is in place for the deployment of wind, solar, mini-hydel, biomass and wind-solar hybrid capacities. The state is also taking steps in the area of developing offshore wind energy. India’s first offshore wind farm project is coming up in the Gulf of Khambhat in Gujarat. This project is being supported by the European Union as well as the Ministry of New and Renewable Energy, the National Institute of Wind Energy and the state government of Gujarat. Expressions of interest for around 1,000 MW of capacity have already been invited. Offshore wind farms have certain advantages over conventional wind plants, including the huge availability of land, higher wind speed (20 per cent more), lower turbulence and more consistent wind availability.

Old and inefficient generation plants are also being phased out and new capacities based on efficient supercritical technologies are being planned. In the past two years we have phased out 1,320 MW of conventional capacity.  The state has also undertaken strategic initiatives for utilising coal at pithead power stations, through rationalisation of coal linkages and through steps taken under the government’s flexible utilisation of coal scheme. On the transmission side, we are ensuring the necessary investments to meet the network expansion and upgradation requirement. In the past five years, we  have incurred a capex of around Rs 130 billion. We plan to infuse Rs 54.5 billion of capex in the next two years.

On the distribution side, initiatives are being taken for transmission and distribution (T&D) loss reduction, including administrative measures covering theft and pilferage of electricity. The state is installing underground cabling, automated infrastructure for energy auditing and digital surveillance for theft detection and prevention.  T&D losses in the state have been brought down to less than 18 per cent in 2017-18 from 38 per cent in 2001.

On the generation front, a major challenge is the lack of assured supply of fuel for achieving economical generation costs. Thermal power constitutes a significant proportion of the state’s installed capacity; however, the state does not have any coal deposits. Also, the landed price of coal after freight and taxes comes to almost two and a half to three times higher than the pithead coal prices. The state has no gas feed, limited lignite deposits as well as limited hydro potential. Land acquisition is another major challenge.

On the transmission front, cost overruns and right-of-way issues have led to delays in infrastructure deployment.

On the distribution front, the average cost of supply to discoms has been increasing, primarily on account of an increase in conventional fuel prices and rising T&D costs. In addition, high cross-subsidisation in tariffs is leading to the migration of a considerable number of open access consumers. Further, in Gujarat we have accorded must-run status to renewable resources and hence, renewable energy integration and real-time generation management to balance infirm generation is a huge challenge. Going forward, the availability of energy storage technologies on a commercial basis and advanced software for forecasting renewable generation would play a vital role in addressing these challenges.

Gujarat’s power demand is increasing at a rate of 6-7 per cent. Hence, huge investments are being made in the generation, transmission and distribution segments. The key lies in improving efficiency so that consumers do not have to pay anything extra for the investments proposed in the short, medium or long term.

The state has been proactive in adopting grid modernisation technologies, which can provide solutions for system-level challenges such as transient stability and network congestion for reliable and secure grid operations. Further, measures such as the mapping of assets for real- time data integration, predictive maintenance, replacement of obsolete technology, adoption of advanced technologies like digital substations, gas-insulated switchgear and hybrid switchgear, substation automation and dynamic line rating are also being implemented.

In short, while Gujarat’s power sector has witnessed a remarkable growth over the past several years, the various initiatives and schemes currently under way are expected to significantly improve operational efficiency and ensure reliable and quality power to all consumers.