Energy efficiency has assumed greater importance in the country following the ratification of the Paris agreement, wherein India committed to reducing the emission intensity of its gross domestic product by 33-35 per cent by 2030 from the 2005 levels (as per the nationally determined contributions). This requires a shift to a low-carbon-growth strategy, which can be achieved by promoting energy efficiency in industrial processes including thermal power generation.

The central government has undertaken several initiatives to promote energy efficiency across industrial sectors – the hallmark being the Perform, Achieve and Trade (PAT) scheme. The scheme’s first cycle yielded impressive results in terms of energy savings – industrial units exceeded the energy savings target by 30 per cent by saving 8.67 million tonnes of oil equivalent (mtoe) of energy. The scheme has also helped create a market-based system to undertake energy efficiency projects through the trading of energy saving certificates (ESCerts). It is now being implemented on a rolling cycle basis with new designated consumers (DCs) being added every year.  Power Line takes stock of the PAT scheme, ESCert trading and other energy efficiency measures for the power sector… 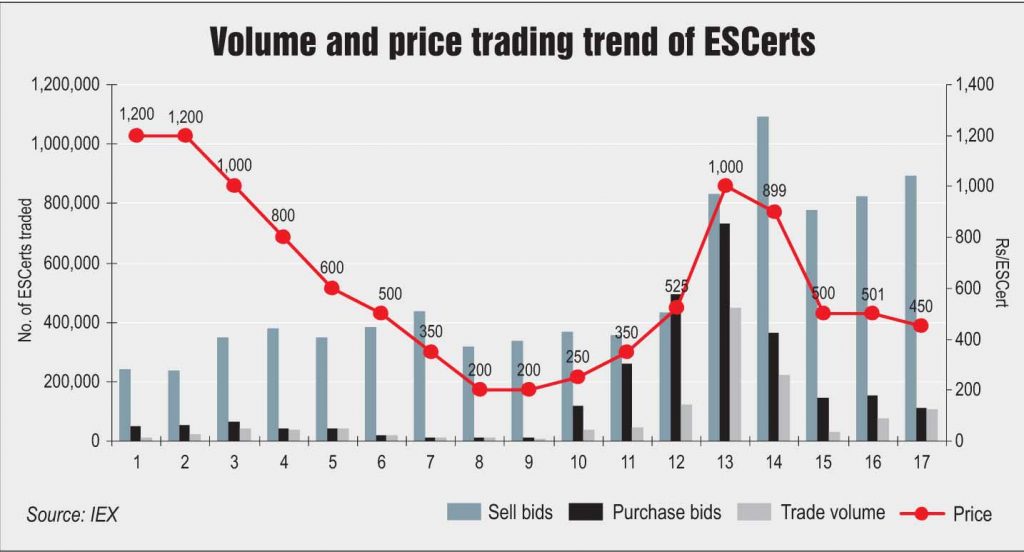 The PAT scheme was launched by the Bureau of Energy Efficiency (BEE) in March 2012 under the aegis of the National Mission for Enhanced Energy Efficiency. The scheme essentially aims to accelerate investments in energy efficiency projects by industrial units referred to as DCs under PAT. Under the scheme, which is divided into different phases or cycles, specific energy consumption (SEC) targets are defined for each DC and incentives/disincentives are granted to DCs exceeding/not meeting their targets.

Under PAT Cycle I (2012-15), about 478 DCs were covered from eight energy-intensive sectors – aluminium, cement, chlor-alkali, fertiliser, iron and steel, paper and pulp, thermal power and textiles, accounting for 33 per cent of India’s primary energy consumption.

At the end of the cycle, 427 DCs across sectors cumulatively managed to save 8.67 mtoe of energy under PAT I vis-à-vis the target of 6.69 mtoe. This also resulted in an avoided generation of about 5,635 MW, leading to monetary savings of Rs 376.85 billion and Rs 95 billion due to the reduction in energy consumption. In addition, 31 million tonnes (mt) of carbon dioxide emissions were avoided, which is 1.9 per cent of the country’s total carbon dioxide emission.

All sectors overachieved their respective energy saving targets except thermal power, which achieved 3.06 mtoe vis-à-vis a target of 3.21 mtoe. However, the sector contributed to about 35 per cent of the cumulative achievement, the maximum among sectors. Some of the measures taken by TPPs included the installation of LED lamps and variable frequency drives, implementation of stage reduction in pumps, use of washed coal, dynamic coal balancing, intelligent sootblowing systems, waste heat recovery systems and vapour absorption machines to reduce energy consumption. 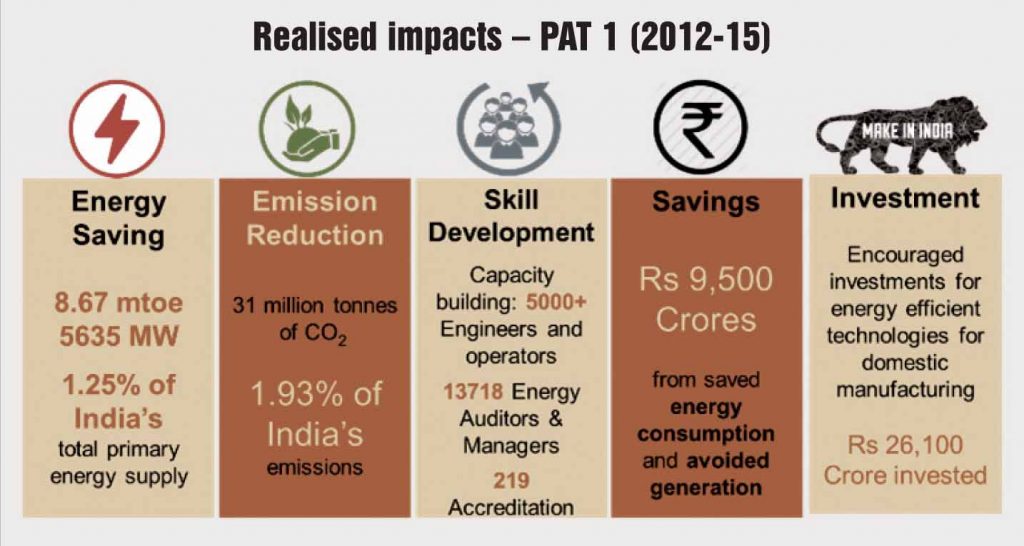 ESCerts are awarded to DCs that overachieve the SEC target prescribed under PAT. These ESCerts, each of which is equivalent to a tonne of oil equivalent, can be purchased by underperforming DCs in order to comply with the energy efficiency norms under PAT. The various regulations and procedures for trading ESCerts have been notified by the Central Electricity Regulatory Commission, and the Power System Operation Corporation  cater to the registration of eligible entities. DCs can also bank the ESCerts for use in the next PAT cycle.

Following the completion of PAT  Cycle I, the BEE issued 3.85 million ESCerts to 306 DCs for overachieving their targets, while 110 DCs were directed to purchase 1.45 million ESCerts for not achieving their targets, resulting in a huge demand-supply mismatch of ESCerts in the market. As per the World Resources Institute, the mismatch occurred on account of lower energy efficiency targets being fixed in the first cycle. It is also possible that the changes in baselines and targets that were carried out due to the normalisation to rectify data gaps for a few industries led to a huge surplus of ESCerts.

As a result, the opening price of ESCerts when trading began in September 2017 at the Indian Energy Exchange (IEX) was discovered at Rs 1,200 per ESCert, significantly lower than the industry’s expectations. An amendment dated March 31, 2016 to the Energy Conservation Rules, 2016 had listed the value of per metric tonne of oil equivalent (toe) as Rs 10,968 for 2014-15. This is also the penalty price for 1 toe, but the details and timelines for penalties on defaulters are yet to be notified. In subsequent weeks, as more DCs were registered to the trading platform, the price of ESCerts declined to reach a low of Rs 200 per ESCert by November 21, 2017. The prices recovered in the subsequent weeks and ended at Rs 450 per ESCert on the last day of trading on January 16, 2018. Overall, only 1.29 million ESCerts were traded in 17 sessions as against the demand for 1.45 million ESCerts.

The total value of ESCerts traded so far comes to around Rs 998 million. In contrast, the cumulative investment made by DCs in energy efficiency projects stood at over Rs 260 billion in PAT Cycle I. These figures indicate that DCs which did not invest in energy efficiency projects and did not meet the targets were able to comply with PAT’s norms by just buying low-cost ESCerts at the end of the cycle. It is, therefore, important to notify floor and ceiling prices under the PAT regulations.

PAT Cycle II and ahead

PAT II commenced in April 2016 and will continue until March 2019. In addition to the eight sectors covered under PAT I, three new sectors – railways, discoms and refineries – have been covered in this cycle. Further, additional DCs from the existing sectors have also been included, taking the total number of DCs to 621. In the TPP sector, 22 additional DCs have been included. The energy saving target in PAT II is 8.87 mtoe. 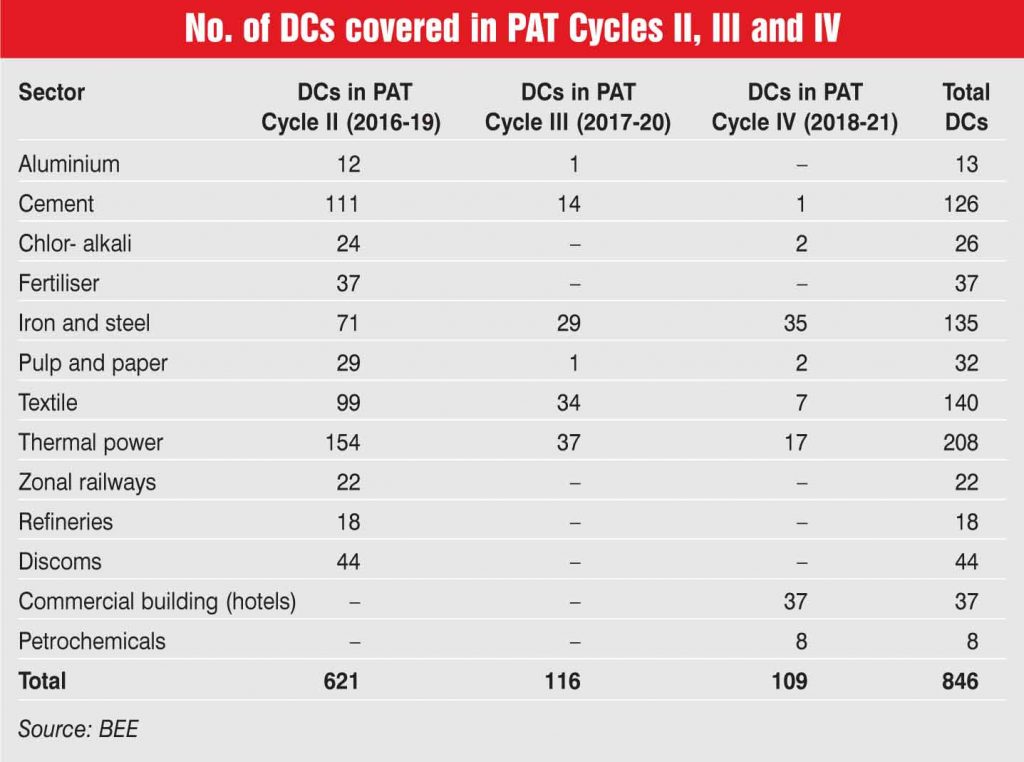 Other energy efficiency initiatives for TPPs

According to the Central Electricity Authority (CEA) estimates, the average efficiency of TPPs in India is only around 34 per cent, one of the lowest globally. While the PAT scheme is one of the key initiatives driving energy efficiency improvements in the power sector, significant priority is being given to other policy initiatives as well to drive efficiency in India’s TPP segment.

One of these is the mandatory retirement of inefficient coal-fired power plants, and the promotion of supercritical and clean coal technologies. The CEA identified 25-year-old (as on March 2016), coal-based power plants aggregating about 10,000 MW, which could be retired and replaced with new supercritical units. Some of the issues associated with these plants are high heat rate, high auxiliary power consumption and low plant load factor. The operating station heat rate (SHR) of old and inefficient units (reheat type) ranges from 2,500 kCal per kWh to 3,500 kCal per kWh against the design SHR of 2,275 kCal per kWh to 2,370 kCal per kWh, which results in reduced generation of electricity per tonne of coal. In contrast, supercritical units have a design SHR of about 2,150 kCal per kWh which results in greater electricity generation per tonne of coal as well as lower emissions.

Following the CEA’s study, central and state utilities have retired about 6,075 MW of old and inefficient coal-based units between September 2015 and March 2018. In addition, over 796 MW of private sector/gas-based/generators diesel sets have also been retired during this period. Further, over 4,116 MW of coal-based units are expected to be retired during 2018-19.

Besides, under the MoP’s renovation and modernisation (R&M) programme for TPPs, energy efficiency improvements are also being undertaken. Several multilateral institutions including KfW and the World Bank have funded pilot projects for energy efficiency improvements in TPPs as part of the programme. For instance, the World Bank has financed the Coal-fired Generation Rehabilitation Project India for demonstrating energy efficiency R&M at coal fired generating units through the rehabilitation of 420 MW of capacity across West Bengal (210 MW unit 5 of the Bandel TPP) and Maharashtra (210 MW unit 6 of the Koradi TPP).

Similarly, an MoU has been signed between India and Japan on the India-Japan Cooperation for Project on Efficiency & Environment Improvement for Sustainable, Stable and Low Carbon Supply of Electricity project. Under the programme, feasibility studies for efficiency improvement have been conducted by the Japan Coal Energy Centre for several plants including Dadri, Singrauli, Durgapur and Wanakbori, among others. Other than these initiatives, the shift to supercritical and ultra-supercritical technologies with higher steam parameters is being encouraged through initiatives such as automatic transfer of coal linkages to supercritical units, which is further expected to improve the efficiency in the thermal power segment and reduce emissions.

Energy efficiency improvement is a continuous process and government support in terms of clear policy and regulatory guidelines can help accelerate these improvements. While the PAT scheme has been instrumental in achieving energy savings across industries, the CEA’s phasing out of old and inefficient units as well as energy efficiency R&M schemes are helping in inducing efficiency in the TPP sector.

With the completion of PAT I, the BEE will apply the lessons learnt in upcoming cycles. Consequently, timelines for comprehensive monitoring, reporting and verification have been extended for future cycles. Focus is also being laid on the quality of the audit verification reports submitted by the auditors. There have been changes in the target and baseline setting methodology. For ESCert trading, the next step is to explore the expansion of its market base by integrating it with other schemes of energy efficiency, through which ESCerts can become an instrument to reward energy savings.