Electrical machines that consume electrical energy and convert it into mechanical energy are widely known as electric motors. The conversion process involves interaction between the magnetic fields set up in the windings of the stator and rotor.

The demand for electric motors in India has experienced a steady rise. Strict power consumption standards and urgency in the reduction of greenhouse gas (GHG) emissions are the major causes for the growth in industrial production and the expansion of the electric motor market. According to data published by the Indian Electrical and Electronics Manufacturers’ Association (IEEMA), the domestic motors industry grew by a significant 13 per cent during the period April 2017-January 2018. In terms of the domestic market size, the motors (and alternating current generators) industry was worth Rs 69 billion in 2016-17.

In recent years, with manufacturers and customers shifting their focus to energy efficient motors (EEMs), the government too is taking significant steps towards facilitating this change. It launched the National Motor Replacement Programme (NMRP) in March 2018, under which it would work with industries to replace all inefficient motors with energy efficient IE3 motors. Moreover, certain key government initiatives such as 100 per cent electrification of vehicles is anticipated to complement the growth of this market in the coming years.

A look at the key trends in the electric motor market, energy efficiency initiatives and policy developments…

The main types of electric motors and their classifications are as follows:

The AC motor segment captured the majority of the revenue share in 2016 and is projected to dominate in the next few years. Among voltage levels, low voltage motors made up the highest revenue share in 2016. However, with growing usage in the industrial segment, medium voltage motors are projected to exhibit the highest growth in the coming years.

The industrial segment recorded a revenue share of over 50 per cent in the electric motor market in 2016. Further, the growing adoption of EVs is likely to display the highest growth for electric motors for this segment during 2017-23. 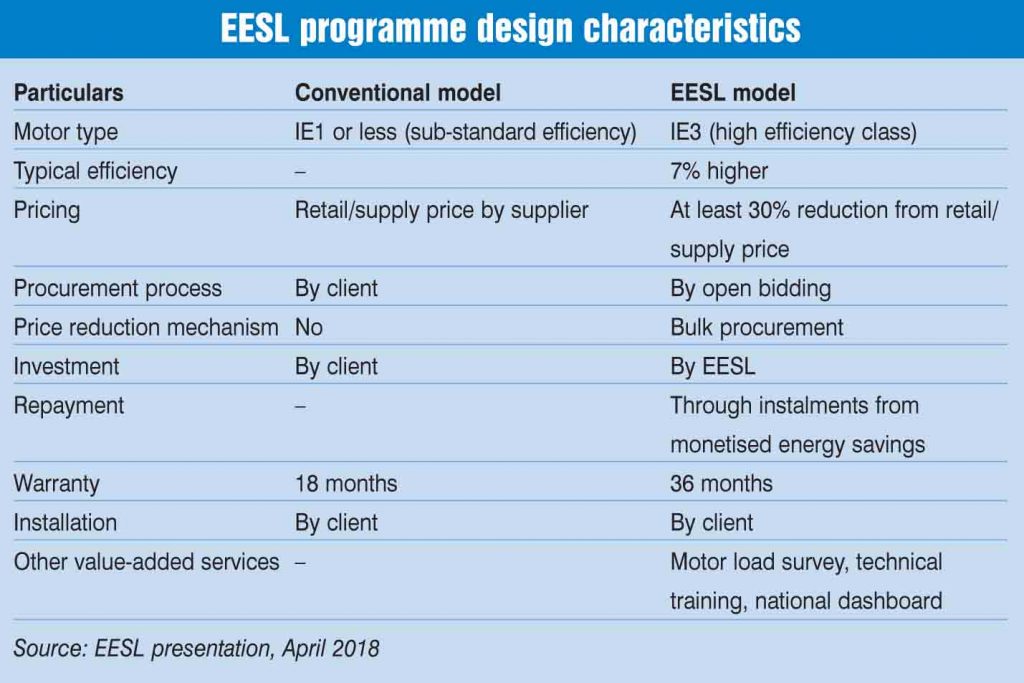 Industrial motor manufacturers have observed a substantial growth in the use of these motors in the oil and gas industry. Electric motors are further used in industries like pulp and paper, chemicals, metals and mining, and to generate power. Owing to the large-scale production in China and other Southeast Asian countries, the largest share of the market belongs to the Asia-Pacific region.

The relevant international and Indian standards define four efficiency classes for low voltage motors ranging from IE1 (least efficient) to IE4 (most efficient). Of these, IE1 motors have a market share of over 50 per cent (April 2017-January 2018), because of their standard efficiency of approximately 77.2 per cent. For IE2 motors, the market is growing at a rate of around 60 per cent due to their high efficiency of 82.8 per cent. Meanwhile, the maximum market share (around 25 per cent) among medium voltage motors is held by 105 kW to 1.5 kW motors.

According to independent market research estimates, the electric motor market is projected to grow at a CAGR of over 6 per cent during 2017-23. Rising awareness of energy conservation coupled with growing industrial infrastructure is driving the growth of this market.

Energy Efficiency Services Limited (EESL) is planning to replicate its success in the LED space in the commercial sector by creating a market for low-cost, energy efficient motors under the national motor replacement program.

“A large chunk of energy is accounted by the industry” says S.P. Garnaik, national programme manager (CGM), EESL. Of the total energy consumption, about 30-34 per cent  goes to the industrial sector, which is a substantial amount. Of that, about 70 per cent is electrical energy consumption. Most of this electricity consumption is due to the use of motor-driven systems. Now, we can address the efficiency issues in the entire system or at the sub-assembly level, which is at the motor level.”

Addressing the entire system has larger opportunities, though it is more complex and requires many technological interventions. So, EESL has decided to tackle the component level. Using a combination of economies of scale and design efficiencies, EESL has so far been able to create motors in the capacity range of 1.1 kW to 22 kW, which are 30 per cent cheaper and result in lower electricity usage.

Under the NMRP, EESL will conduct motor load surveys in micro, small and medium enterprises (MSMEs), identify the motors that can be replaced, procure IE3 motors in bulk and deliver them to the MSMEs for installation. In order to incentivise MSMEs to participate in the programme, EESL will also offer an extended warranty of three to four years on IE3 motors (against the 18-month warranty offered by motor manufacturers).

Apart from the price benefit, one of the other levers to create demand is the fact that the Department of Industrial Policy and Promotion has issued a quality assurance guidance that says that manufacturers will have to supply a minimum energy performance standard adhering to the IE2 level. The new regulations came into force in October 2017, and require industrial users to move to IE2 or higher efficiency motors.

The EESL motors are of the IE3 level, which can save around 20 per cent of electricity compared with the current industry standard, depending on the application. In order to establish the energy savings levels from IE3 motors, EESL tested 50 IE3 motors under actual field conditions in MSME clusters such as Surat, Jamnagar, etc. A few IE3 motors were also tested at the Mahindra & Mahindra plant. From these tests, EESL obtained a bandwidth of energy savings through the use of IE3 motors – from 5 per cent to 20 per cent. Thus, EESL is undertaking the programme based on “deemed savings” (not on the basis of theoretical energy savings but by means of actual energy savings established through pilots).

Currently, around 99 per cent of the motors being used are IE1 or non-IE. Phase I of the nation wide programme would seek to replace 120,000 motors of 1.1-22 kW, which would save 175 million units of electricity. In the second phase, 200,000 motors would be replaced, including those of capacity higher than 22 kW.

As per an EESL presentation in April 2018, so far, the board approval has been obtained for an investment of Rs 2,200 million and bidding of 120,000 motors has been completed. Crompton Greaves, Siemens and Bharat Bijlee are the selected vendors. The confirmed clients include Mahindra, Tata Motors, Shree Cement, Nahar Group, and Surat Textile Cluster. 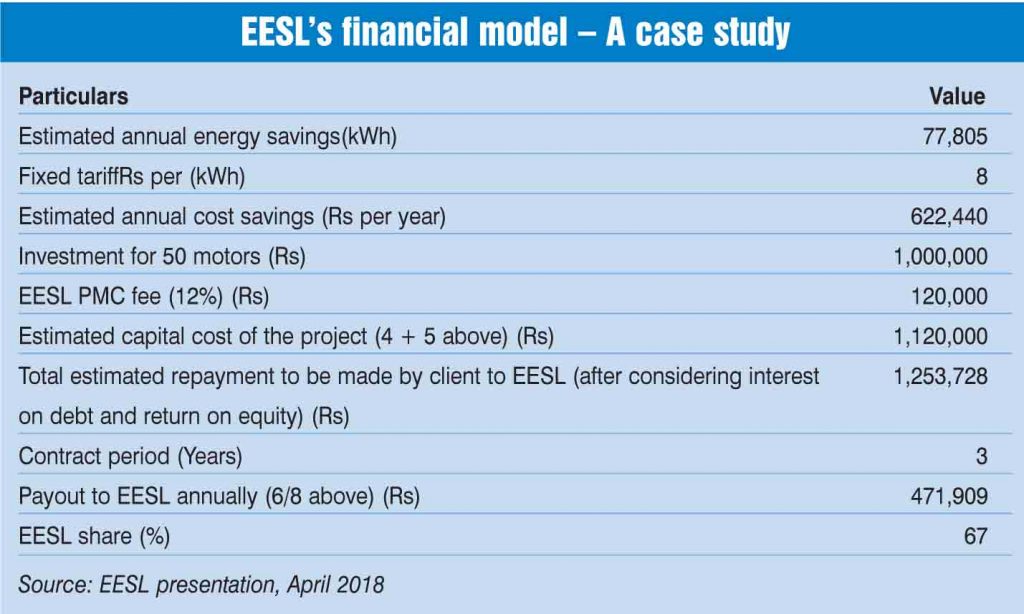 Overall, there is a replacement potential of about 11 million motors in the country, which works out to about 15 billion units of electricity being saved, leading to 6,000 MW of capacity reduction.

According to Sanjeev Arora, vice-president of ABB India’s motors and generators business unit, part of the robotics and motions division, “Motor users could save even more energy by replacing the low efficiency motors that are already in use. Making any product in India takes 30-60 per cent more energy than in countries where manufacturing has achieved high levels of energy efficiency. Now the spotlight has turned on the industrial sector and low voltage motors. These are so widely used that they are often called the ‘workhorses of industry’.”

The shift to EEMs will have a very positive impact on the industry and the country. Industry consumes 40 per cent of the total energy produced, with motors consuming roughly 65 per cent of this share. Therefore, the new regulations will produce large energy savings over time, as higher efficiency motors are installed.

However, the industry could take this opportunity to go beyond regulatory requirements and replace the existing installed base of low efficiency motors with IE2 versions. If companies choose to do this, India could annually save close to 9,000 GWh of energy and an incredible Rs 40 billion in energy bills, which is roughly about one-third of the energy used in India. This could help India reach its goal of 35 per cent reduction in carbon dioxide emissions from the 2005 levels by 2030, under the United Nations Paris Agreement.

Before the new regulations were introduced, acceptance of IE2 and higher efficiency motors in the market was not very encouraging. However, the Indian government’s backing for IE2 efficiency is seen as the missing link that will help the industry to overcome its inertia. Minimum motor efficiency standards have already been successfully put in place by countries like Brazil, Australia, China and Saudi Arabia. The European Union and the US have taken things further with IE3 for even higher efficiency levels.

An important positive step would be for motor manufacturers, as well as original equipment manufacturers that package electric motors, to communicate the benefits of higher efficiency to industrial motor users. Some OEM segments such as compressors have proactively adopted IE3 motors, making energy efficiency one of their competitive advantages.

As per ABB, the government has put a framework in place for the industry to move towards a low-carbon future. It could push the agenda further by requiring its own agencies and state-owned enterprises to use only IE3-rated motors. At the same time, it could encourage SME motor manufacturers to shift to producing IE2 as well as IE3 motors as standard, with the goal of maintaining a healthy equilibrium of supply and demand. The government could also promote the use of materials required for EEMs, such as low-loss electrical steel.

While the advantages of EEMs are well established, there are a number of challenges that are hampering their uptake. Lack of access to capital and higher initial costs of EEMs is the key amongst them. EEMs lower electricity consumption significantly, which, in turn, leads to reduced electricity bills, and offer almost constant efficiency between 65 and 100 per cent load ranges. They are also more tolerant to thermal and electrical stresses, thus reducing downtime, all with an attractively low payback period.

Despite the steps taken by the government and manufacturers, ultimately it is up to the industry to take on the challenge and replace older motors with energy efficient products – a move that would bring energy savings and international acceptance of their operations.