The coal-based power generation segment continues to be the backbone of the Indian power sector. With over 196 GW of installed capacity, it occupies the largest share in the total generation mix. While its share in the installed capacity has reduced (from 60 per cent in 2014 to 57 per cent at present) owing to rapid renewable capacity additions, the segment remains crucial for the power sector from the point of view of grid stability and reliable power supply.

That said, the coal-based power segment has been facing headwinds over the past few years due to falling plant load factors (PLFs), lack of power purchase agreements (PPAs) and fuel supply issues. A major cause for concern is the build-up of stressed assets, which has mainly affected independent power producers (IPPs). The Reserve Bank of India’s (RBI) circular dated February 12, 2018, for the resolution of stressed assets by banks is expected to push as large as 60 GW of conventional generation plants into the non-performing asset (NPA) category in a major setback to the sector.

Meanwhile, the gas-based power generation segment has been languishing with shortfall in domestic gas supply, the rollback of subsidy for liquefied natural gas (LNG) imports and lack of clarity on the future availability of domestic gas.

To address some of the segment’s issues and concerns, the government launched some key schemes and initiatives during the past year. These include the procurement of aggregate power from non-PPA plants, rationalisation of linkages for IPPs and coal linkage auctions under the Scheme for Harnessing and Allocating Koyala Transparently in India (SHAKTI).

Power Line takes a look at the key trends in the thermal power generation segment, recent developments and outlook for the segment…

As of May 31, 2018, the installed coal generation capacity stood at 196.96 GW, accounting for around 57 per cent of the total installed capacity as against 60 per cent in March 2014. The declining share of coal-based capacity can be attributed to the growing renewable energy capacity in the country. Between 2013-14 and 2017-18, the coal-based capacity recorded a compound annual growth rate (CAGR) of 7.94 per cent, while renewable energy capacity grew by 23.72 per cent. In 2017-18, around 5.01 GW of coal-based capacity was added , as against 15 GW in 2013-14. Capacity addition in the segment has been declining since 2016-17, prior to which it was increasing on a year-on-year basis.

As of March 2018, the private sector occupied the highest share (38 per cent) in the installed coal-based capacity, followed by the state and central sectors at 33 per cent and 29 per cent respectively. Over the years, the sector-wise share in the installed capacity has changed significantly. In March 2014, the state sector held the highest share of 37 per cent, followed by the central (32 per cent) and private sectors (31 per cent). 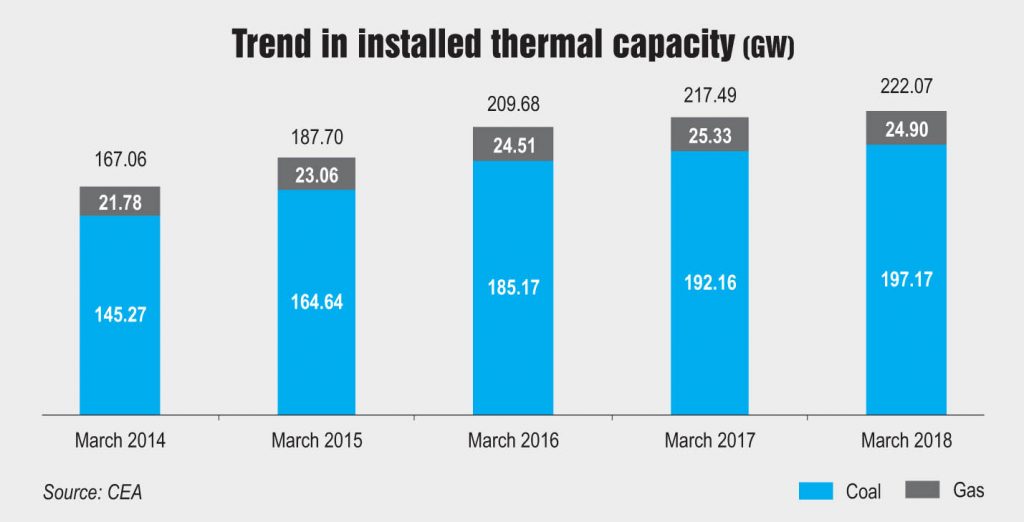 Meanwhile, coal-based power plants recorded an average PLF of 60.5 per cent in 2017-18, an increase of around 1 per cent from the previous year. Segment-wise, the central sector recorded the highest PLF at 72.4 per cent, followed by the state and private sectors at 57.2 per cent and 55.3 per cent respectively. Between 2013-14 and 2016-17, the PLF of coal-based power plants has decreased from 65.5 per cent to 59.6 per cent. While earlier the decline in PLFs was attributed to coal availability issues, more recently, poor power offtake by discoms and growing renewable energy capacity have been deemed responsible for the decline.

The thermal power generation segment is reeling from mounting stressed assets. A report on energy by the Parliamentary Standing Committee notes that there are as many as 34 thermal projects with an aggregate capacity of over 40 GW currently under financial stress. Further, the RBI’s circular for the early identification of stressed assets and their resolution met with opposition in the power sector as the failure of banks to agree on a resolution plan threats to push about 60-70 GW of power projects into the category of NPAs.

Despite appeals from developers for special dispensation for the power sector, the RBI has refused to extend any sector-specific relief. The developers claim that the RBI circular is unfair for them, as their debt servicing capabilities are directly linked to coal availability and payments from power distribution companies. The Ministry of Power (MoP) and private power firms have demanded that stressed power projects not be categorised as stressed in 90 days, and the deadline of 180 days to resolve a bad loan (after which the liquidation process is immediately triggered) be extended to 270 days.

A number of models and schemes for the revival of stressed assets are under deliberation. Some of these are the Scheme of Asset Management and Debt Change Structure (Samadhan) model, under which unsustainable debt would be converted into equity to be held by the lender who could then put it out for developers; and the Power Asset Warehousing and Revitalisation (Pariwartan) scheme for formation of an asset management company that would seek funds from the National Infrastructure Investment Fund to run projects and service the debt and warehousing model. Meanwhile, the Power Finance Corporation has initiated resolution proceedings against defaulting power projects.

Low power offtake by discoms has been one of the primary reasons for the build-up of stressed assets in the power sector. Taking cognisance of the same, the government has launched a pilot scheme for the procurement of 2,500 MW of power from generators with projects without PPAs for a period of three years. Under the scheme, the tariff will be fixed for three years without escalation. In the auction, seven companies, RKM PowerGen (550 MW), Jaypee Nigrie Thermal (100 MW), IL&FS Energy Limited (550 MW), MB Power (175 MW), SKS Chattisgarh Power (300 MW), Jindal India Thermal Power Limited (125 MW) and Athen Jhabua Power (100 MW), have submitted bids for an aggregate capacity of 1,900 MW matching the L1 bid of Rs 4.24 per unit.

Another key initiative to ensure adequate coal availability and efficient coal utilisation by the power sector has been the introduction of fuel linkage auction under SHAKTI by Coal India Limited (CIL). In the first-ever auction, carried out in September 2017, CIL allocated long-term coal linkages of 27.8 million tonnes (mt) to 10 private power plants with an aggregate capacity of 9,044 MW. Apart from this, the coal ministry has released the methodology for the rationalisation of coal linkages for IPPs. The IPPs can now procure coal from a company other than the one with which it has signed a contract by transferring the existing coal linkages to their nearest mines. The methodology for rationalisation of linkages was first introduced for central and state sector plants.

The issuance of a clarification by the government on investments incurred for emission control equipment by thermal power plants (TPPs) is another major policy development. In June 2018, in a letter addressed to the Central Electricity Regulatory Commission, the MoP stated that the environment ministry’s notification requiring compliance by TPPs with the environmental norms issued in December 2015 is a change in law event. Many developers have sought relief from regulatory commissions before going ahead with such large-scale investments in emission control technologies. With greater clarity, TPP owners can raise financing for such investments as the tariff impact of these investments can be passed on via modifications to the existing PPAs.

In addition, the MoP has issued draft amendments to the Tariff Policy, 2016, which has significant implications for the thermal power segment. As per the amendments, any change in domestic duties, levies, charges, surcharges, cess and taxes after the award of bids that changes the project cost would be treated as change in law event and allowed as pass-through, subject to approval by the appropriate commission. On the other hand, the amendments proposed to exempt power plants of state and central public sector units from mandatory tariff-based competitive bidding, which if approved would distort the competitive landscape of the power generation segment.

In recent years, ensuring adequate coal availability for the power plant has become the top priority of the government and policymakers. Despite this, coal-based plants often face shortage in coal availability. The coal stock available at power plants as of June 30, 2018 was sufficient to last 10 days, but it reduced to as low as six days in November 2017. This shortage in availability was attributed to the lack of proper planning and logistics. However, coordinated efforts of the railway and coal ministries have helped improve coal availability significantly.

In the gas-based power generation segment, developers had witnessed some relief on the back of an e-auction scheme for supplying regasified-LNG to stranded and underutilised projects, which were provided with subsidy support. The scheme, which was operational for two years, was rolled back in 2016-17 and is not likely to be resumed. Also, the government has refused to grant priority to gas-based plants for the allocation of fuel from one of Oil and Natural Gas Corporation’s deepwater gas fields at the Krishna-Godavari basin, which is ready for commercial production and has invited bids from prospective buyers.

As per the revised National Electricity Plan (NEP) for generation released by the Central Electricity Authority (CEA), no new coal-based generation capacity is required up to 2027 and the plants already under construction would be sufficient to meet the upcoming power demand. This is based on the electricity demand projections as per the 19th Electric Power Survey. The NEP notes that during 2017-22, coal-based capacity addition ranging from 6,445 MW (based on the CAGR of 6.18 per cent in electricity demand) to 19,700 MW (based on the CAGR of 7.18 per cent) would be required to meet the electricity demand. However, 47,855 MW of coal-based projects are currently under different stages of construction and are likely to yield benefits during 2017-22. The PLF of the thermal plants would depend on renewable and hydro capacity addition and the retirement of old thermal plants.

The NEP notes that for the period 2022-27, the excess coal-based capacity available by March 2022 would help meet the increase in demand, resulting in better utilisation of plants. According to the plan, the additional capacity required for 2022-27 should preferably come from flexible sources of generation to meet the peaking, balancing and ramping requirements of the grid.  However, if this additional capacity comes from coal-based plants, the PLF of coal-based power stations will be 61-62 per cent by 2026-27.

In the gas-based power generation segment, owing to the prevailing shortage of natural gas in the country, no additional gas-based plant has been planned for the period 2017-22, except the plants that are under construction or ready for commissioning. However, if the availability of natural gas improves, the gas-based capacity may increase as it helps in efficiently balancing the grid and reducing emissions.

To conclude, the thermal power generation segment is currently under the weather. That said, once power demand picks up with the realisation of huge latent demand and faster economic growth, the health of the distribution segment improves and the stressed assets are revived, the segment will deliver the desired performance.