The roll-out of smart meters across the country is one of the most significant technological upgrade exercises in the energy sector. By transitioning from electronic meters to smart meters, the government is aiming to give a fillip to the ailing distribution utilities. Smart meters can help them to not only improve meter data collection but also optimise the information obtained by the smart meters and convert that data into business decisions.

The installation of smart metering infrastructure allows a utility to monitor the quality of power across substations and accordingly plan to improve the power quality in identified areas, thereby improving customer satisfaction and ensuring the timely payment of bills. It also enables discoms to monitor aggregate technical and commercial (AT&C) losses on a real-time basis. The government aims to bring down AT&C losses to 15 per cent by the end of 2019 from the current level of around 19 per cent.

Further, since smart meters can monitor energy usage in intervals of an hour or less, it allows utilities to implement dynamic tariff models and charge more for  the electricity used during peak hours. Such pricing strategies have the potential to increase the efficiency of the entire price chain by serving as an avenue for managing electricity demand and supply balance. Moreover, given the anticipated increase in electric vehicles, smart metering infrastructure can help flatten the overall demand by shifting load from daytime peak periods to night-time low-demand periods.

Initiatives and the progress so far

Metering is one of the principal objectives of all government initiatives related to the power distribution segment. Aimed at providing 24×7 power supply in urban areas, the IPDS envisages metering of distribution transformers, feeders and consumers in urban areas, as well as the installation of smart meters with supervisory control and data acquisition systems. About 248,000 smart meters have been sanctioned under the scheme. The DDUGJY aims at strengthening the distribution infrastructure in rural areas, including metering of distribution transformers, feeders and consumers.

UDAY, launched in 2015, has made feeder and distribution transformer metering compulsory, in order to improve the operational efficiency of discoms. It has also mandated the deployment of smart meters for all consumers with a consumption of more than 200 units per month. Saubhagya aims to connect all the remaining unconnected households by end-2019. Under the scheme, all connections are to be metered. No connections will be released without a meter.

Around 156,970 smart meters have been sanctioned under the IPDS and are currently in the procurement phase. Further, under the IPDS, funds of Rs 7,500 million have been sanctioned recently for the procurement of more than 3.7 million smart meters by discoms to be installed under UDAY. As of June 30, 2018, only 3 per cent of smart meters have been installed for consumers with a consumption of more than 500 kWh under the UDAY scheme. Meanwhile, for consumers with consumption above 200 kWh and up to 500 kWh, the progress in smart metering has been only 1 per cent.

Apart from UDAY and the IPDS, the government has set up the National Smart Grid Mission (NSGM), which is mandated to plan and monitor programmes related to smart grids, including smart metering. Under the NSGM, two projects, one in Maharashtra and the other in Chandigarh, are being implemented with plans to install smart meters for over 300,000 consumers. Several pilot projects (including the establishment of knowledge centres) implementing various functionalities through smart meters are also being executed.

Energy Efficiency Services Limited (EESL) is assisting in the implementation of smart metering through the Smart Meter National Programme (SMNP). To this end, in July 2017, EESL launched a mega tender to procure 5 million smart meters on behalf of the Uttar Pradesh and Haryana utilities for implementing smart grid projects in these states. The roll-out is proposed to be undertaken under the build-own-operate-transfer model, wherein EESL will undertake all the capital and operational expenditure with zero upfront investment from the state utilities.

Under this model, EESL will recover the investment through payments on a per-meter, per-month basis. EESL will claim payment from discoms on the basis of the actual cost incurred for smart metering components, operations and maintenance expenses during the project period, interest cost on project financing and return on equity. Procurement will be undertaken through two separate tenders for suppliers and system integrators in order to ensure competitive prices and utilise the relevant expertise. In addition, multiple meter suppliers will be contracted to speed up deliveries, reduce vendor lock-in and improve system interoperability. 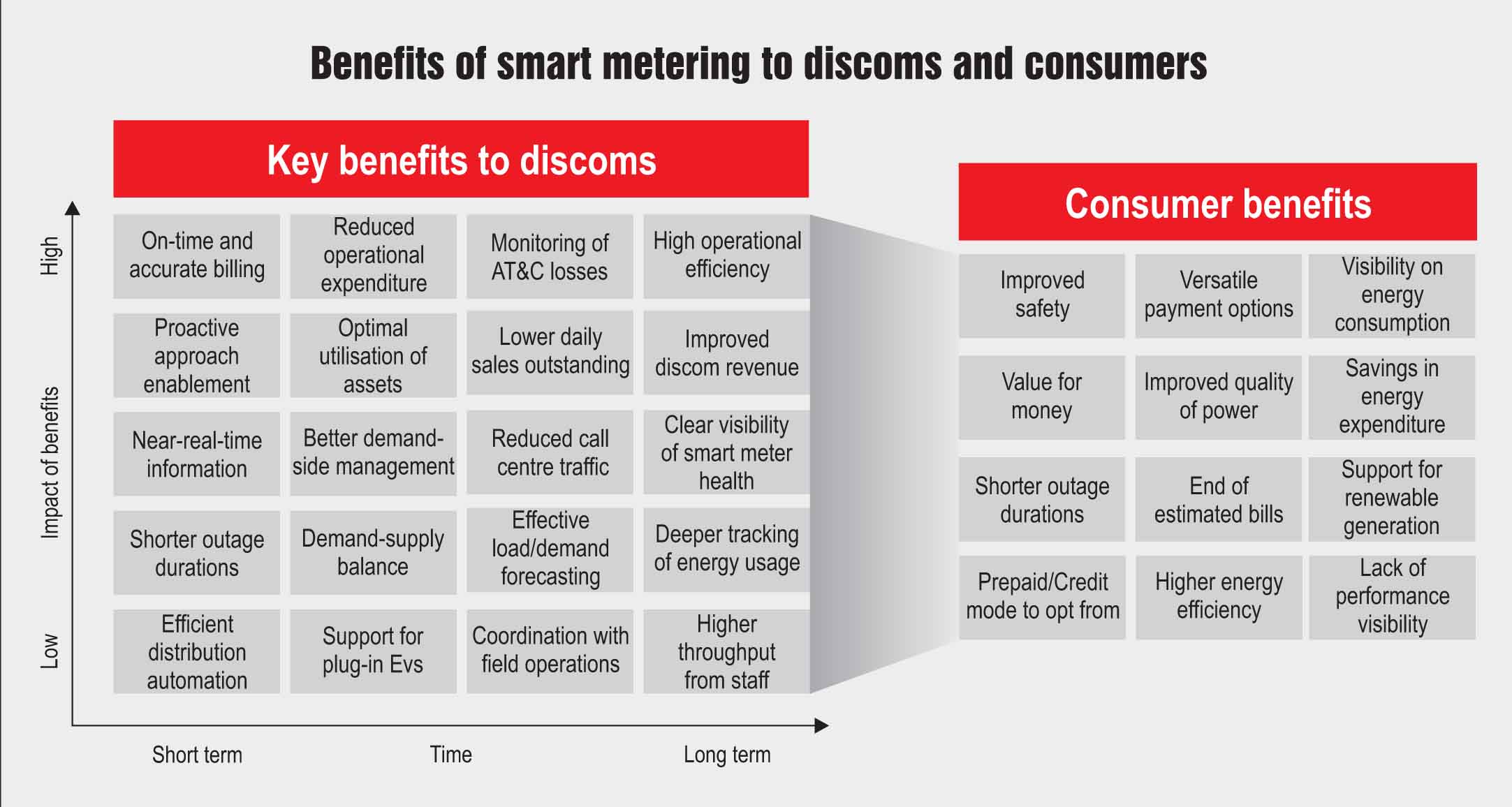 In order to achieve 100 per cent metering and large-scale roll-out of smart meters and prepaid meters, market readiness is essential. Estimates suggest that the industry capacity for metering is around 50 million per annum, including a smart metering capacity of 25 million per annum. But it is not just manufacturing capacity that needs to be scaled up; deployment capacity also needs to be enhanced. Given that the business environment for metering is changing, new types of players and models are required. Interoperability, especially in the case of smart meters, is also an important factor to be considered. The readiness of all stakeholders (market as well as utilities) for a new arrangement and investment is key.