The central government has launched a plethora of schemes for the power sector since 2014, with special focus on the distribution segment. Besides the flagship Ujwal Discom Assurance Yojana (UDAY), the twin programmes for distribution system strengthening and improving electricity access are the Integrated Power Development Scheme (IPDS) and the Deendayal Upadhyaya Gram Jyoti Yojana. The latter has now been subsumed under the ambitious Pradhan Mantri Sahaj Bijli Har Ghar Yojana (Saubhagya). While IPDS stresses on strengthening distribution networks and introducing IT applications in urban areas, DDUGJY and Saubhagya focus on strengthening rural distribution and household electrification respectively. Power Line presents an update on the progress of these schemes…

IPDS was approved by the central government in November 2014, with a total outlay of Rs 326.12 billion and a budgetary support of Rs 253.54 billion.

System strengthening works are being carried out in 3,036 towns and entail the augmentation of substation capacity and distribution line length, laying of underground and aerial bunched cables, installation of distribution transformers, etc. Projects worth Rs 276 billion have been approved, and of the total approved grant of Rs 172.8 billion, over 36 per cent has been released so far.

Meanwhile, IT Phase-II works are under way in 1,931 towns, which were not covered in the erstwhile R-APDRP scheme. Projects worth Rs 9.85 billion have been approved, for which a grant of Rs 6.2 billion will be provided. The disbursement of grant has, however, been small at just about 3 per cent of the total. The works entail supply of hardware in towns to access R-APDRP applications, provision of modems for remote meter reading, GPS-based GIS survey of assets, preparation of feeder/town-wise AT&C loss database, upgradation of data centres, etc.

ERP implementation work is also progressing at a tardy pace in most states. Of the approved project cost of Rs 6.4 billion, over 4 billion will be provided as grant from the central government. However, no funds have been disbursed so far. Similarly, in the case of smart metering, no grant has been released so far of the approved value of Rs 5 billion for projects worth Rs 8.34 billion.

Launched along with the IPDS in December 2014, DDUGJY targets electrification of all villages, and strengthening of sub-transmission and distribution (T&D) infrastructure in rural areas. Under DDUGJY, projects worth Rs 425.65 billion have been sanctioned so far and about 22 per cent of the sanctioned cost has been disbursed to the states.

Of the total sanctioned project cost, the maximum share of over 47.5 per cent is for system strengthening while 35 per cent is for feeder separation. The rest is for metering, village electrification, and the Sansad Adarsh Gram Yojana. The overall physical achievement of new projects under the scheme stood at 28 per cent as of June 2018 (according to Rural Electrification Corporation’s latest available review planning and monitoring presentation).

Under the scheme, 100 per cent electrification of villages across the country was achieved on April 28, 2018, with the electrification of Leisang village in Manipur. Only 1,305 villages that are either uninhabited or under grazing land remain unelectrified. 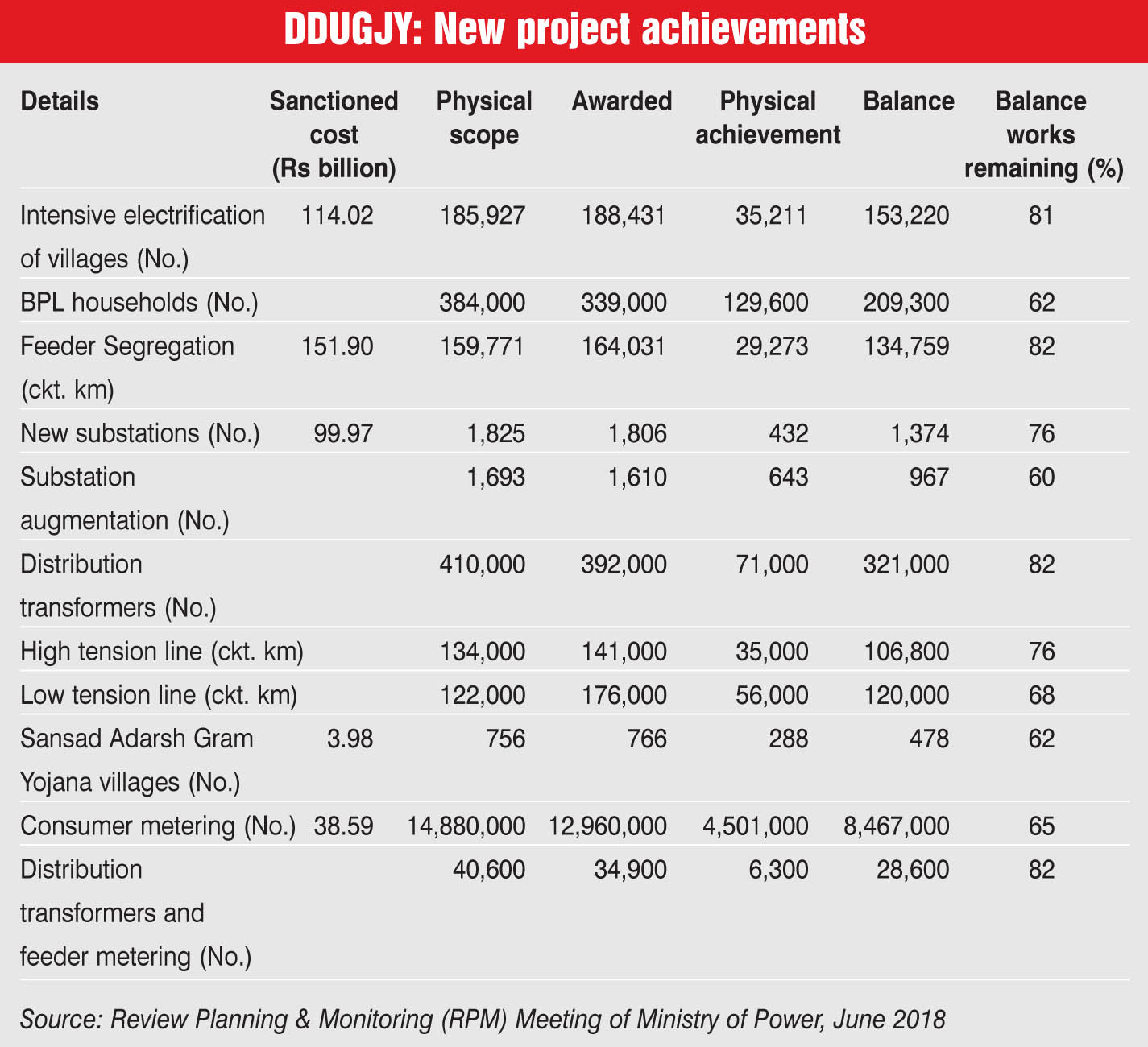 Saubhagya, launched in September 2017, has set an ambitious target of 100 per cent household electrification by March 2019. It entails a total outlay of Rs 163.2 billion, including a gross budgetary support of Rs 123.2 billion. Of the total 34.9 million households, about 33.6 per cent (11.7 million) have been electrified since October 2017. In order to expedite the implementation of the scheme and incentivise discoms, the MoP is planning a reward of Rs 500 million for state utility employees and a grant of Rs 500 million for discoms that would meet the household electrification target at the earliest.

Although the MoP is working hard to push the scheme’s timely completion, ground reports indicate that various challenges may delay the targeted deadline. For instance, in Uttar Pradesh, the state with one of the highest numbers of unelectrified households at 12.6 million, only 16.7 per cent have been electrified so far. As per Uttar Pradesh Power Corporation Limited, a large number of people are simply refusing to take free electricity connections. These include consumers that already get electricity illegally or apprehend post-connection billing issues. Based on regular feedback from the field, the utility believes that 40 per cent of the unelectrified households may not be ready to opt for electricity connections under the Saubhagya scheme despite their best efforts. 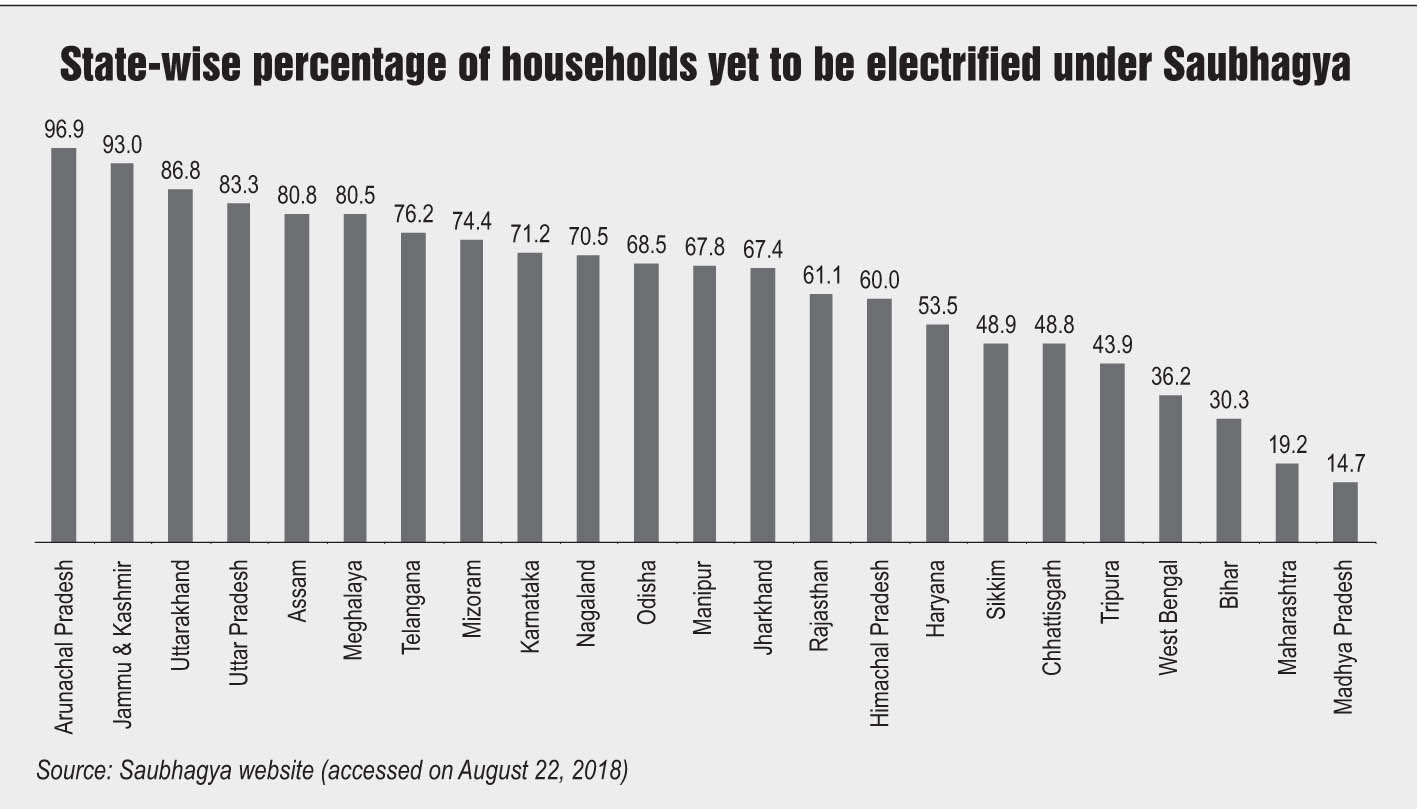 The various government schemes are surely a positive for the distribution segment, but tackling on-ground challenges and ensuring timely completion are key to realising the benefits under these schemes. Disbursement under the schemes is also fairly low, indicating the slow-paced progress of implementation. However, given the mammoth scope of works and the aggressive envisaged targets, some delays are well anticipated. That said, the central government and state discoms need to jointly work to address these issues in order to realise the dream of 24×7 power supply.