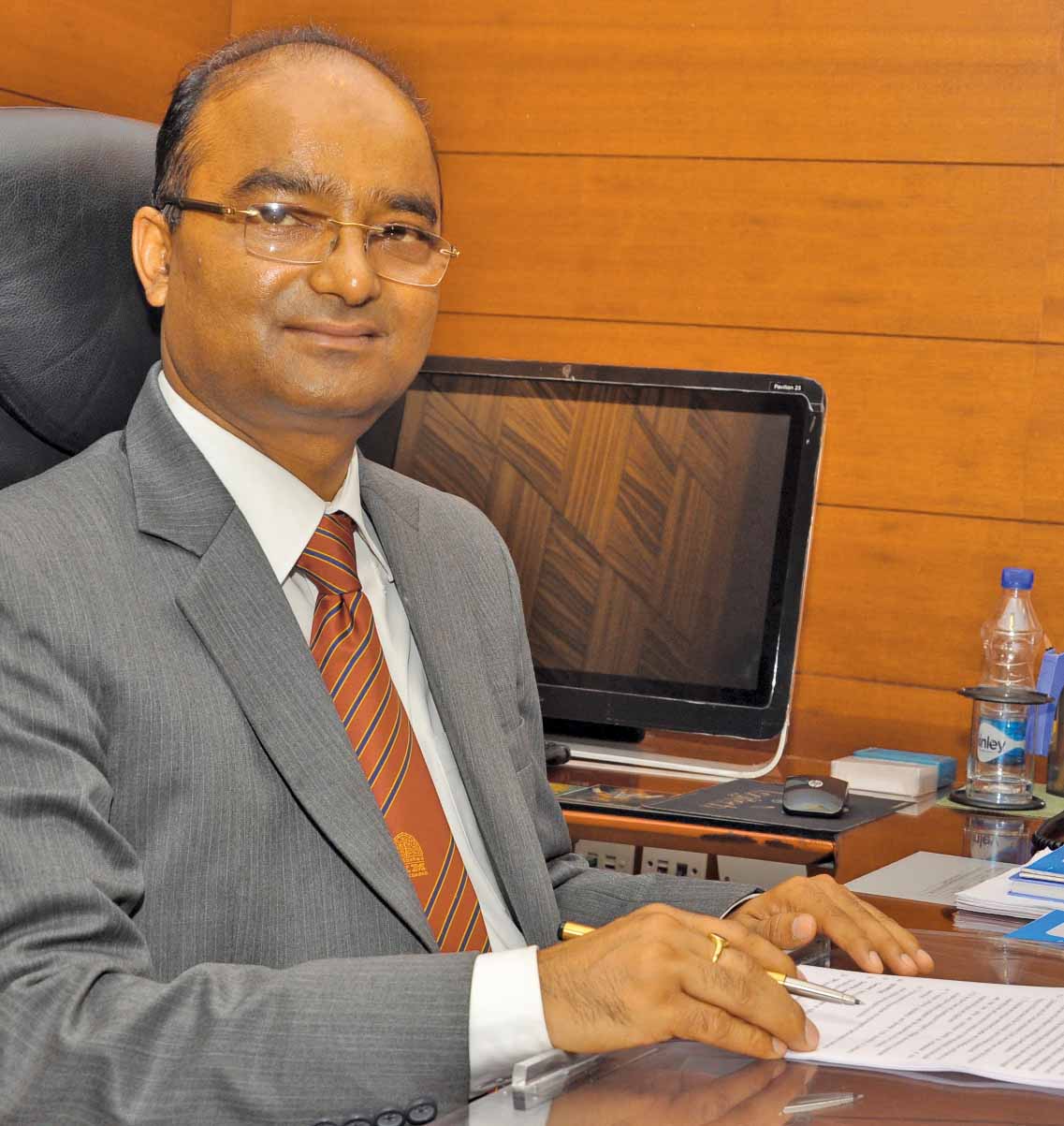 N.L. Sharma, CMD, SJVN Limited, knows hydro is languishing but that doesn’t stop him from being optimistic…

N.L. Sharma, chairman and managing director (CMD) of SJVN Limited, is disappointed that growth has been worse than sluggish, with only 44 GW coming onstream so far. He is dismayed that hydropower currently contributes to just 14 per cent of the country’s energy mix, compared to 50 per cent five decades ago.

“Growth in hydropower generation has not kept pace with the overall growth in power generation, and even less with thermal power. But it is important to understand that within the complex Indian power system, which is the third largest power system in the world, the hydropower segment is even more complex and poses challenges unique to its nature,” says Sharma.

For instance, the snow-fed rivers in the north and Northeast have tremendous potential. However, the unpredictable geology and precarious seismology are some of the challenges that increase project gestation periods – and consequently, costs and tariffs.

By contrast, thermal projects have much shorter gestation periods, which was one of the major reasons why most hydropower projects had been stalled in the past. As a hydropower developer, SJVN is also highly dependent on natural precipitation patterns.

“About 30-35 per cent of our hydropower output comes from large reservoir-based hydropower stations, and their functioning is highly dependent on the amount of rainfall. The remainder comes from hydropower schemes that are contingent on snow-fed rivers. So there always remains a heavy dependency on weather, and unfortunately over the years, weather cycles have been rather erratic. Apart from that, hydropower generation is a highly capital-intensive mode of power generation and there are some environmental and regulatory challenges as well,” Sharma explains.

Having said that, he is quick to point out that the advantage of hydropower is its quick start-up time, which helps in managing the intermittent nature of renewable energy. According to him, renewable energy is the only way forward and hence, hydro is a crucial resource.

In terms of the company’s goals, Sharma says SJVN has always aspired to be a nationally and internationally acclaimed company in the affordable and sustainable power space. Its prime focus is developing its projects (all of which are at various stages of construction) and delivering results ahead of schedule. It is also focusing on expediting other projects, such as those at the survey and investigation stage, which suffer for want of statutory clearances.

Hydropower has always been its core competence. “We have vast experience and technical expertise in working in the difficult Himalayan terrain. We are keen to explore the unharnessed hydro potential of the hill states of the north and Northeast,” says Sharma. Additionally, SJVN is diversifying into wind and solar energy as well as power transmission.

Sharma started his career with the Himachal Pradesh Administrative Service (HAS) in 1989 and thereafter worked in various capacities, such as assistant commissioner, subdivisional magistrate, deputy secretary to the chief minister, and director of small savings up to 2000. His first assignment in the HAS turned out to be a real test of nerves. That was the period of the Mandal agitation, in the early 1990s. There was widespread violence, the army had to be called in, and Sharma was forced to take charge of law and order amidst the unrest. “I was accountable for the safety and security of so many citizens. I had to take some very bold measures but in the end, my administration was highly appreciated,” he recounts.

Following this he was posted as secretary with the Himachal Pradesh State Electricity Board, which marked the beginning of his long engagement with the power sector. There too, he was thrown into the deep end almost at once. As secretary, he had to manage over 25,000 people and over 40 unions. “Now, when I look back, I realise that these kinds of extraordinary situations empowered me to handle any kind of adversity,” says Sharma.

In 2008, Sharma joined SJVN as executive director in the HR department. He went on to become director, personnel, in 2011 and then CMD  in December 2017.

Asked to describe his management style, Sharma  says, “Given the complex Indian business context, management maturity, I feel, is more relevant than management technique or style. By the former, I mean being nimble-footed in adapting to diverse situations.” It also calls for flexibility in dealing with a diverse workforce. SJVN, for instance, has a fairly heterogeneous workforce, with baby boomers and millennials working in tandem, along with direct recruits and people on deputation from the state government. Given this eclectic employee mix, a one-size-fits-all management style cannot possibly work.

Sharma believes in driving business excellence through people, and puts people at the heart of any system, process or procedure. “I feel that the prime function of the top leadership is setting the direction, or business strategy as some people call it, for realising the organisation’s vision. The direction is actually a roadmap for realising the vision,” he says. “I have always believed that my people are capable of achieving organisational goals, but their capabilities must be steered in the right direction.”

He is also aware of the need to give his staff ample space and opportunities to contribute to business outcomes, allowing them to showcase their capabilities. After all, success can only thrive in an enabling work environment.

In another interesting point, Sharma describes the management as being, in a way, the “custodian” of a company’s culture. He lists five key drivers in creating an enabling work environment, especially in the PSU context.

The first driver is transparent and accountable internal systems. The second is systems that create a sense of mission so that employees can see the alignment in their individual and professional growth with the growth of the organisation as a whole – SJVN uses a balanced “Score Card” here as a tool.

The third driver is empowering employees through periodic communication from the top management (especially the CMD) so that unlike many CPSUs, the CMD or directors are not perceived as  “the invisible hand” but rather as leaders steering the organisation towards its future, whilst constantly in touch with their people.

The fourth and the fifth drivers, “perhaps the most important ones” according to Sharma, are building capability through training and development and fostering innovation.

On future trends in the power sector, Sharma says that electric cars and smart grids are only two of the many exciting developments that lie ahead. Overall, he expects major transformations to occur. A shift from fossil fuels is already taking place. Recent regulatory changes mean that efforts to boost renewable capacity will continue energetically, which he says  SJVN will certainly leverage.  Apart from anything else, it has always been an organisation driven by learning and a belief in  constant innovation to keep itself abreast of technological shifts and changing environmental scenarios.

Yet, Sharma adds, innovation alone will not suffice. “We will have to resort to dual-fold innovation. Incremental innovation must be displayed in doing what we are doing now more efficiently and more effectively; at the same time, we also have to strive for disruptive innovations that trigger major technological and system advancements. So ambidexterity will differentiate the power market leaders from the followers.”

If Sharma sounds like a tough cookie, it’s because his childhood put iron in his character. He remembers travelling on foot for more than 30 km through hilly terrain just to attend school. There were no luxuries or comforts. Yet one thing was in abundance – his determination to achieve something in life.

“I feel that when one is committed to one’s goal, some favourable circumstances emerge even in the most adverse of conditions. For me, support emerged in the form of my elder brother, who tutored me to consolidate aspects that would otherwise have remained lacking. English was one such aspect that my government school did not properly address. I was also very fortunate to have found mentors during my school and university years,” he recalls.

These mentors, who were teachers at school and college, recognised his academic excellence and took it upon themselves to coach him. “They were visionary teachers who went way beyond their duty in helping to shape the nation’s future. We hear of ‘catch them young’ now, in connection with India’s skill development programme, or in the context of China’s initiative to churn out excellent sportspersons. But my mentors were practising the ‘catch them young’ philosophy back then!”