Access to finance continues to be a bone of contention for the renewable/decentralised energy sector in India. Institutions’ lendable resources are limited at any given point of time, and there is always a trade-off between how much time and effort can be put in, and what kind of top line and bottom line the new enterprises would generate. Given this sort of business dynamics, it is possible that the sectors that rightly deserve bank credit may get excluded. This was precisely the motivation behind the institution of priority sector lending (PSL) norms by the Reserve Bank of India (RBI) in 1974, which also included renewable energy in its ambit in 2015.

But despite PSL’s proposed role in filling an essential gap in energy access provision to communities, last-mile energy enterprises and organisations often find it difficult to raise capital for their own operations and expansion. Other funds and credit lines have been created in recent times for renewable energy projects and enterprise financing. However, the use of these funds for providing decentralised energy solutions and energy entrepreneurship has been limited. As per the Clean Energy Access Network (CLEAN), an all-India representative organisation launched in 2014 with a clear mandate to support, unify and facilitate the decentralised energy sector in India (with USAID as one of its many international and national partners), based on estimates from previous studies, the debt mismatch for the sector on an annual basis in India could be as high as $64 million, while the equity gap ranges from $26 million to $127 million per annum.

In the past, the objective of PSL was to ensure that the vulnerable sections of society got access to credit, and that there was adequate flow of resources to segments of the economy with higher employment potential to alleviate poverty. Thus, sectors such as agriculture, and micro and small enterprises were included as the priority sectors. But the national priorities have changed in the past four decades as India has moved up to the middle-income-level status.

In 2015, the RBI reviewed the PSL guidelines and given the increased emphasis on renewable energy in India, it accorded “PSL status” to this sector. This allowed banks to provide loans up to Rs 150 million to borrowers for solar, biomass, wind and micro-hydel power generation, as well as renewable energy-based public utilities like street lighting systems and remote village electrification. For individual households, the loan limit was set at Rs 1 million per borrower.

A look at how PSL has evolved for the renewable energy segment, its impact so far, and the key issues and challenges…

The initial PSL target for banks was to raise credit to the priority sectors up to around 33 per cent by 1979. As of today, the target set by the RBI for lending to the redefined priority sector is 40 per cent of the adjusted net bank credit or the credit equivalent of the off-balance sheet exposure, whichever is higher, for all scheduled commercial banks uniformly. All foreign banks have been brought on par with domestic banks and the same target/sub-targets have been made applicable to them. Banks are also required to meet the sub-targets such as 18 per cent for agriculture, 7.5 per cent for micro enterprises and 10 per cent for the weaker sections.

PSL certificates (PSLCs) were introduced in April 2016 and could be purchased at a market-determined fee on an electronic platform. These are tradable certificates issued against priority sector loans of banks so as to enable them to achieve their specified target and sub-targets for PSL through the purchase of these instruments in the event of a shortfall, and at the same time incentivise the banks with surplus to lend more to these sectors. This would allow the most efficient lender to provide access to the poor, while finding a way for banks to fulfil their norms at a lower cost.

RBI’s Working Group, which reviewed the PSL guidelines in 2015, observed that it was imperative to look at the credit delivery mechanism to ensure that the credit reaches the intended beneficiaries, and misuse in the form of availing of credit from multiple institutions does not take place. Therefore, to be eligible for “PSL status”, any borrowal account, including that of individual members of self-help groups or joint liability groups (SHGs or JLGs), should be reported to one of the credit bureaus, which should set up an information sharing system.

Currently, PSL compliance is monitored on the last day of March each year. The working group recommended that more frequent monitoring of PSL compliance by banks be done (quarterly). The need for more stringent measures such as the imposition of monetary penalties could be considered after a period of three years (in around 2018-19), based on the banks’ achievement of targets.

The new norms were a boon for private sector banks, which could now raise infrastructure bonds, that are exempt from PSL, but still use the money for renewable energy lending. Indian banks could now offer loans to rural end users to fund the installations of solar systems, and that too at concessional rates. The Ministry of Finance (MoF) has advised banks to “encourage” home loans or home improvement loan applicants to install solar systems and include the equipment cost in the home loan.

The move is part of an overall push to renewable energy and banks have been “requested” to offer a 1 per cent interest concession for such projects to propagate the use of green technology. This is in addition to the suggestions for a new fund raising and lending model, where state-run lenders such as the State Bank of India and the Punjab National Bank (PNB), through their overseas branches, were expected to borrow from multilateral agencies such as the World Bank and provide rupee loans to borrowers through their branch network in the country.

Recently, PNB and the Ministry of New and Renewable Energy (MNRE), with support from the Asian Development Bank, are working towards removing identified barriers to the large-scale adoption of PV rooftop systems by enhancing the institutional capacity of discoms and other RTS stakeholders, while Rural Electrification Corporation has been identified to implement a renewable energy financing facility within the scope of the Indo-German Financial Cooperation. 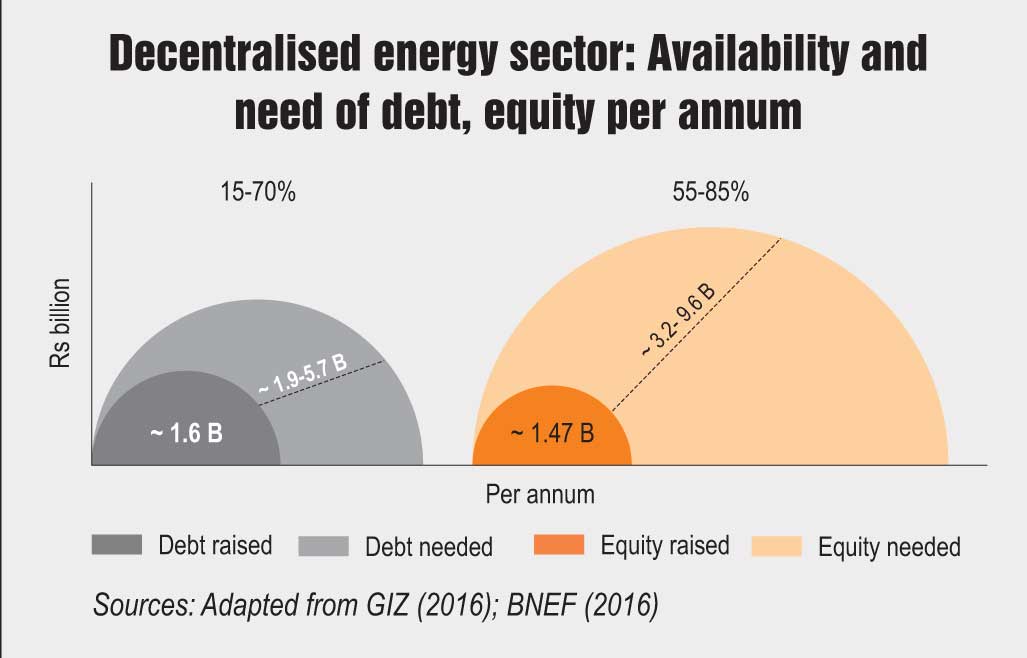 For the renewable energy sector, this was a good start. But to make a meaningful difference, it has been suggested that the PSL amount for renewable energy be increased, perhaps to Rs 5 billion. Until then, India continues to raise capital for renewable energy projects in the country from foreign institutions – including from the US, Japan, France and Germany.

There are others who feel that since 40 per cent is a big number and the ticket size of such loans is small with scattered customers, banks are required to divert a large part of their resources in meeting the PSL target, which is not always feasible.

Banks are also facing issues related to increasing non-performing assets (NPAs), high overdues and political priorities. Solutions to accelerate PSL for renewable energy include providing direct subsidy to the banks for financing the weaker sections so that losses and NPAs of the banks are reduced; local NGOs providing assistance for identification of lower-income beneficiaries; creating a separate segment of banking operations, “Banking for Weaker Sections”; reducing and subsidising interest rates; and creating financial awareness for the weaker sections with more involvement of educational institutions.

Industry experts also remark that loans to the solar off-grid sector were part of the PSL targets during the period 2015-17, but did not really translate into higher solar off-grid lending by banks at the ground level. Specific schemes launched by the MNRE for solar financing through the National Bank for Agriculture and Rural Development (NABARD) helped much more in achieving the objective.

Local enterprises such as SELCO Solar Private Limited, established in 1995 to provide sustainable energy solutions and services to under served households and businesses in rural areas, work with state-level banks to push PSL. Although this helps, it is not a mandatory requirement for solar lending to succeed. A sustainable ecosystem consisting of potential end-users, a technical partner, a reliable NGO or a banking correspondent, and a trusted entrepreneur, is required to facilitate energy access. In addition, this needs to filter down to the micro or village level.

As per SELCO Solar, there are other initiatives that need to be taken to push lending for decentralised energy in the rural areas:

The reasons mentioned above, particularly the risk perception and lack of confidence in promoters that lack significant credit history or do not have collateral, in turn, affect interest rates, collateral requirements and other conditions linked to debt.

In conclusion, the RBI annual reports do not indicate the amount of lending to the renewable energy sector. Thus, there is a need for greater understanding of the data collection process on PSL lending and the current challenges around recording renewable energy-specific credit flow. Based on this understanding, the impacts of PSL on the renewable/decentralised energy sector need to be assessed, while a sub-target for this sector within PSL could be explored.