As the 180-day deadline for the resolution of high-value non-performing assets (NPAs) of around Rs 20 billion and above comes to a close end-August 2018, there is heightened anxiety among industry stakeholders.

The Allahabad High Court, which is currently hearing the case where power producers are contesting the Reserve Bank of India’s (RBI) February circular mandating a one-day default trigger for the resolution of stressed assets, is expected to deliver its verdict shortly before the deadline expires and would determine whether a relief or exemption is possible.

In the run-up to the final hearings made in the case, a new report by the Parliamentary Standing Committee on Energy was tabled earlier this month, which strongly criticised the new RBI norms and stated that these have forced the electricity sector towards NPAs. This is a major leg up for the sector. “Under the new guidelines, the definition of default has been revised with far-reaching consequences. The committee notes that the new RBI guidelines will only deepen the crisis of the electricity sector as its leitmotif is distinct, peculiar and sector-specific, without any generic underpinning with other sectors of the economy,” stated the 37th report of the committee.

The committee also suggested that a new framework be put in place for resolving the crisis. In line with the report’s recommendations, a high-powered committee, headed by the cabinet secretary and including representatives from the ministries of railways, finance, power and coal, and lenders with major exposure, has now been set up by the centre to look into the issues that have contributed to the stress in the sector. This has brought some relief for the industry.

“The Parliamentary Standing Committee’s comments are appropriate and accept that the problem of stressed assets is not the fault of the developers but is due to problems beyond their control, including regulatory delays, challenges in land acquisition and green clearances and difficulties in dealing with financially weak state distribution companies, which buy all the power generated by the plants,” says Ashok Khurana, director general, Association of Power Producers.

Agrees Amit Kapur, partner, J. Sagar Associates, “As highlighted in the report, the causes of stress in the power sector are either external (issues like fuel availability and pricing; land acquisition, resettlement and rehabilitation and costs; environmental clearances, etc.) or structural (regulatory lag in implementing change in law and tariff resets; high cross-subsidy surcharge and additional surcharge barriers; perpetuating of regulatory assets; failure to give carrying costs, etc.). Neither of these causes is getting addressed for now. Hopefully, the high-powered committee set up with the approval of the prime minister will address these issues meaningfully.”

For now, RBI, the country’s apex bank, is holding its ground and declining the need for an extension, and bankers are trying to finalise deals for sell-offs to prevent assets from going into liquidation. Resolution outside the bankruptcy court would fetch the banks better value, say analysts.

With major uncertainty looming over the sector, which has some Rs 1,740 billion worth of NPAs, Power Line takes stock of the stressed assets situation…

Findings of the Parliamentary panel report

To recall, the Parliamentary Standing Committee on Energy had examined issues relating to 34 stressed power projects identified by the Department of Financial Services. For these projects, chances of insolvency proceedings being invoked had been raised after the RBI’s February circular. These included almost 24.4 GW of commissioned projects and 15.7 GW of upcoming projects.

The committee notes that the outcomes of the RBI’s revised framework with respect to the electricity sector have been very disappointing, with major lenders to independent power producers displaying significant accretion to NPAs (bad loans) and their slippages exceeding Rs 1.8 trillion in the fourth quarter of financial year 2018 (January-March 2018). Meanwhile, slippages of six major lenders have exceeded Rs 610 billion.

The report also says that the lenders’ actions for resolving stressed assets in the electricity sector have glaring limitations such as sub-optimal bid outcomes, a small buyer universe and a weak commercial framework. The report states that for a power project in Chhattisgarh, an offer of only Rs 25 billion has been made against a debt of Rs 83 billion, that is, a haircut of about 70 per cent would have to be taken. Further, a power plant in Jharkhand received a bid of only Rs 350 million per MW. One of the stressed plants has been restructured but it is still in stress because the promoters cannot solve the systemic issues. The committee states that forced sale under the NCLT would lead to a big sacrifice of public money without any benefit to the economy or to the electricity sector.

The committee has also appreciated the Ministry of Power for its efforts to address the issue in a holistic manner and says that the Pariwartan and the Samadhan schemes intended to resolve the issue are noteworthy. “The committee feels that both the schemes intend to resolve the issue of stressed assets and deserve objective and careful attention of the government with a positive mindset.”

The Rural Electrification Corporation (REC) had formulated the Pariwartan scheme as a multi-track approach that focuses on recovery, value enhancement and quick disposal of stressed assets, wherein an asset warehouse may be established to protect value and revitalise assets. However, REC deposed that to facilitate the implementation of the Pariwartan scheme, the asset reconstruction company (ARC) regulations would need amendments. Meanwhile, under the State Bank of India’s (SBI) Samadhan scheme, the bank will appoint two rating agencies (Crisil and India Ratings), which will assign ratings and find out what will be the sustainable and the unsustainable debt. While the unsustainable debt would be converted to equity, investors would take 51 per cent equity stake in the project along with the sustainable debt.

As for the current status of the stressed assets, according to the findings of the committee, as on May 31, 2018, out of 34 identified stressed cases, seven have reportedly been resolved after allocation of coal under the SHAKTI scheme (see Table).

Of the remaining, negotiations are reportedly on by lenders to finalise their resolution with bidders. As per news reports, Adani Power is reportedly the highest bidder for the KSK Mahanadi plant in Chhattisgarh, at a deal value of Rs 102.5 billion. KSK Mahanadi Power is promoted by KSK Energy Ventures and has a debt of Rs 185.51 billion.

The deal for Jaiprakash Associates’ Prayagraj Powergen project is also likely to be finalised soon as the project has received viable offers from bidders. According to recent news reports, Resurgent Power (26 per cent owned by Tata Power) and JSW Energy are currently vying for the 1,980 MW project and have offered bids of Rs 60 billion each. The project has a 25-year power purchase agreement with the five discoms in Uttar Pradesh.

For Avantha Power’s 600 MW Jhabua project in Madhya Pradesh, which has a debt of Rs 43 billion, negotiations are currently on. The plant, which has been operational since May 2016, was put on the block by Axis Bank in May 2018. Reportedly, Worlds Window, which is backed by Exim Industries, has put in the highest bid for the project so far.

For Coastal Energen’s 1,200 MW project in Tamil Nadu, which was put on the block by banks led by SBI, Edelweiss ARC is reportedly the only bidder. It has offered Rs 31 billion for the project. Another project that was put on the block by SBI earlier was SKS Power Generation’s 1,200 MW thermal project in Chhattisgarh. Lenders are close to finalising a buyer for this project, which has an overall exposure of Rs 48.92 billion. The 1,440 MW RKM Powergen project is so far the only project in which the debt will be restructured with the existing promoters and the resolution plan is likely to be finalised soon.

According to industry watchers, the bids placed for these projects indicate that the banks are willing to take a haircut of up to 50-60 per cent on loans.

Meanwhile, on the outlook for reviving these stressed assets, Dr P.V. Ramesh, chairman and managing director, REC, had stated to the committee, “For projects that are less than 50 per cent complete, there is no hope of their being revived unless the promoter does something outside the formal structure that exists today. Projects of 16,000 MW perhaps have no scope but to go to the NCLT and be liquidated for whatever their value is or find an alternate use.” 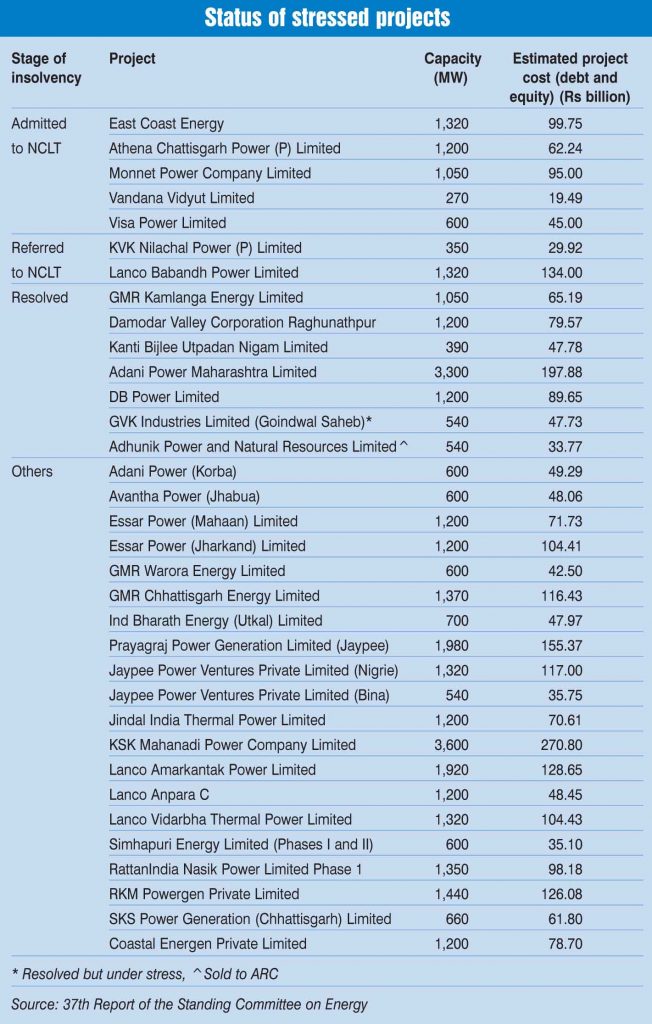 The sector’s hopes have been lifted with the setting up of the high-powered committee. According to a power ministry statement, “The committee will look into the various issues with a view to resolving them and maximising the efficiency of investment. This includes the changes required to be made in the fuel allocation policy, the regulatory framework, mechanisms to facilitate the sale of power, ensure timely payments…changes required in the provisioning norms/Insolvency and Bankruptcy Code, Asset Restructuring Company Regulations and any other measures proposed for the revival of stressed assets so as to avoid such investments becoming NPAs.”

Reportedly, the committee’s internal discussions have begun. It is awaiting the Allahabad High Court’s judgment on the issue. Meanwhile, RBI has supported the centre’s proposal to set up an ARC backed by REC.

Meanwhile, power producers have sought the power ministry’s intervention in helping clear discom dues. “We have asked the power ministry to intervene and ensure that dues worth almost Rs 340 billion-Rs 350 billion that are owed to private developers on the basis of power sold and regulatory assets are cleared by the states expeditiously so that around 13 GW of assets can return to normalcy in the next four to five years,” says Khurana.

Ultimately, the broad consensus among industry watchers is that more steps would be needed to address sector-specific issues rather than simply tackling the immediate crisis. How the NPA action will unfold in the coming few days will be a keenly watched industry trend.