Telangana’s power sector has come a long way from facing an energy deficit of 6.2 per cent in 2014-15 to becoming power sufficient. The task of meeting the rising energy demand of the newly carved state was under taken by Telangana State Power Generation Corporation Limited (TSGENCO), which was incorporated in 2014 post the bifurcation of Andhra Pradesh. The power demand in Telangana has been growing consistently since its formation. In 2017-18, the peak demand in the state grew at a compound annual growth rate (CAGR) of 9.3 per cent to 10,298 MW, as against 7,884 MW in 2014-15. The per capita power consumption of the state is estimated at over 1,500 kWh, higher than the national average of 1,149 kWh for 2017-18. TSGENCO has played a major role in helping the state distribution companies to meet the growing demand through consistent capacity addition. To meet the future growth in demand, the utility has planned capacity additions of 5,110 MW, which will enable the state to become power surplus by 2022-23.

The Kothagudem TPS-Stage VII was commissioned most recently, in July 2018, at an estimated cost of Rs 57 billion. This is the state’s first supercritical technology project for which the engineering, procurement and construction contract has been executed by Bharat Heavy Electricals Limited (BHEL). Notably, the project was completed in a period of 40 months as against the stipulated timeline of 48 months. Meanwhile, TSGENCO’s hydropower stations include the 900 MW Srisailam Left Bank, 815.6 MW Nagarjuna Sagar, 234 MW Priyadarshini  Jurala, 240 MW Lower Jurala, 90 MW Pulichinthala, 60 MW Nagarjuna Sagar Left Canal, 36 MW Pochampad,  and four small and mini hydel projects with an aggregate capacity of 36.16 MW. The Lower Jurala hydroelectric project (HEP) and 3×30 MW units of the Pulichinthala HEP were commissioned by the utility post the bifurcation with APGENCO. It is also set to commission the last 30 MW unit of the 120 MW Pulichinthala HEP by September 2018. The unit was initially scheduled to be commissioned in October 2017, however, the commissioning was intentionally delayed to ensure adequate availability of water for generation from the plant.

The Nagarjuna Sagar and Srisailam Left Bank hydropower stations are pumped storage projects that are equipped with reversible-type pump-turbine motor generating units. In a significant development in August 2018, TSGENCO put into operation the reverse pumping facility at the Nagarjuna Sagar hydel station for the first time, which has enabled the pumping of about 70 million units of water back to the reservoir till now. The flexibility provided by the reverse pumping system at both the pumped storage projects has helped facilitate grid management and allowed the utility to meet peak demand requirements.

In terms of operational performance, TSGENCO registered a decline in the plant load factor (PLF) of its thermal power plants from 80.3 per cent in 2014-15 to 74.7 per cent in 2017-18. However, the PLF of TSGENCO’s thermal plants is significantly higher than the all-India average PLF of 60.7 per cent for coal-based power plants. The genco is amongst the top performing utilities in terms of PLF. 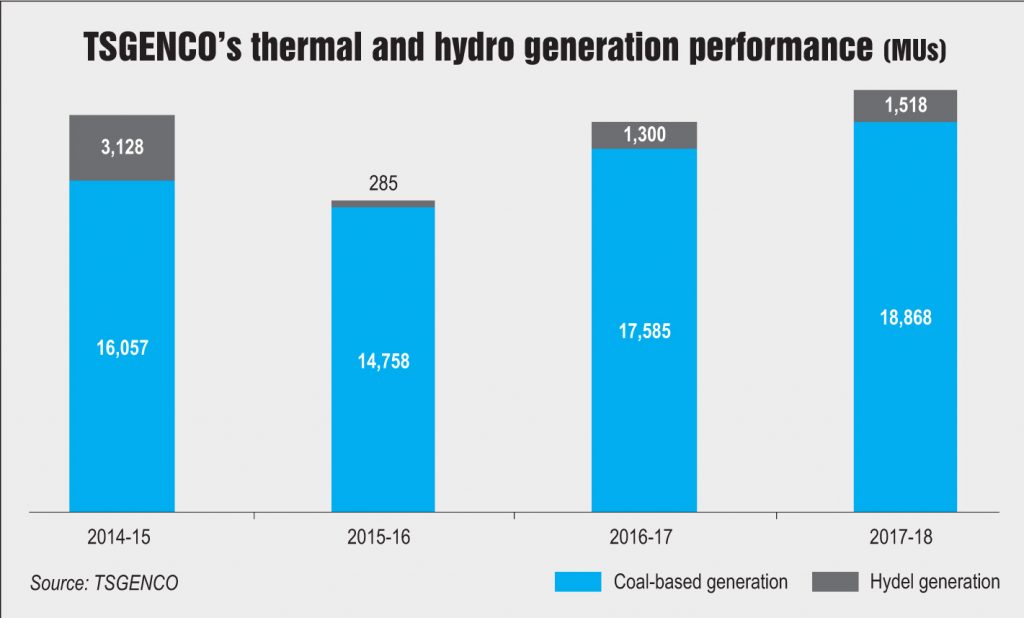 Going forward, TSGENCO has plans for significant thermal capacity addition. Nearly 5,080 MW of power projects are proposed to be set up by TSGENCO by 2022, at a total investment of nearly Rs 350 billion. The two flagship projects that are in the pipeline are the 1,080 MW Bhadradri thermal power project (TPP) and the 4,000 MW Yadradri TPP, both of which will be executed by BHEL. The Bhadradri TPP involves the construction of four units of 270 MW each at an investment of Rs 50.44 billion, while the Yadradri TPP entails the setting up of five units of 800 MW each at Rs 299.65 billion.

The Bhadradri plant recently received approval from the Ministry of Environment, Forest and Climate Change, which was long pending due to an order from the National Green Tribunal. While all the units were initially expected to be commissioned by 2018, the delay in obtaining the clearance has pushed the commissioning date to September 2019. Meanwhile, the Yadradri TPP, which is based on supercritical technology and is the first ultra mega power plant to be taken up by a state utility, achieved its financial closure in September 2017. In view of the additional upcoming capacity, TSGENCO has decided to retire eight generating units totalling 720 MW at its existing Kothagudem TPS by March 2019, since they have exceeded their useful life. Besides new projects, TSGENCO is expected to incur capex in retrofitting its existing projects with emission control equipment in order to comply with the environmental regulations. Recently, the utility awarded an order worth Rs 10 billion to BHEL to supply flue gas desulphurisation systems for the recently commissioned Kothagudem TPS-Stage VII and the upcoming Bhadradri TPP. In order to ensure coal supply for the projects, the genco has also signed an MoU with Singareni Collieries Company Limited to ensure the supply of coal to both the plants.

While the utility plans for significant capacity addition, it has an extremely small renewable energy footprint with an installed solar capacity of only 1 MW, despite the vast solar potential that the state offers (the state has an average solar insolation of nearly 5.5 kWh per square metre for over 300 sunshine days). TSGENCO can expanding its renewable energy portfolio by tapping into this segment. Further, with regard to the projects in the pipeline, the utility needs to ensure timely completion in order to avoid cost overruns. In the past, TSGENCO has faced delays in project execution on account of land acquisition, inundation due to heavy rains and floods, stoppage of work by villagers, non-provision of inputs by contractor, etc.

In addition, given the recent announcement by the Ministry of Power regarding shortage of domestic coal in the coming years, the genco needs to ensure that firm fuel supply agreements are in place for its upcoming projects. Lastly, given the significant quantum of planned upcoming capacity, and the current trend of declining PLFs and stranded thermal assets in the sector, the utility may be compelled to explore options to effectively manage its surplus power in the future.