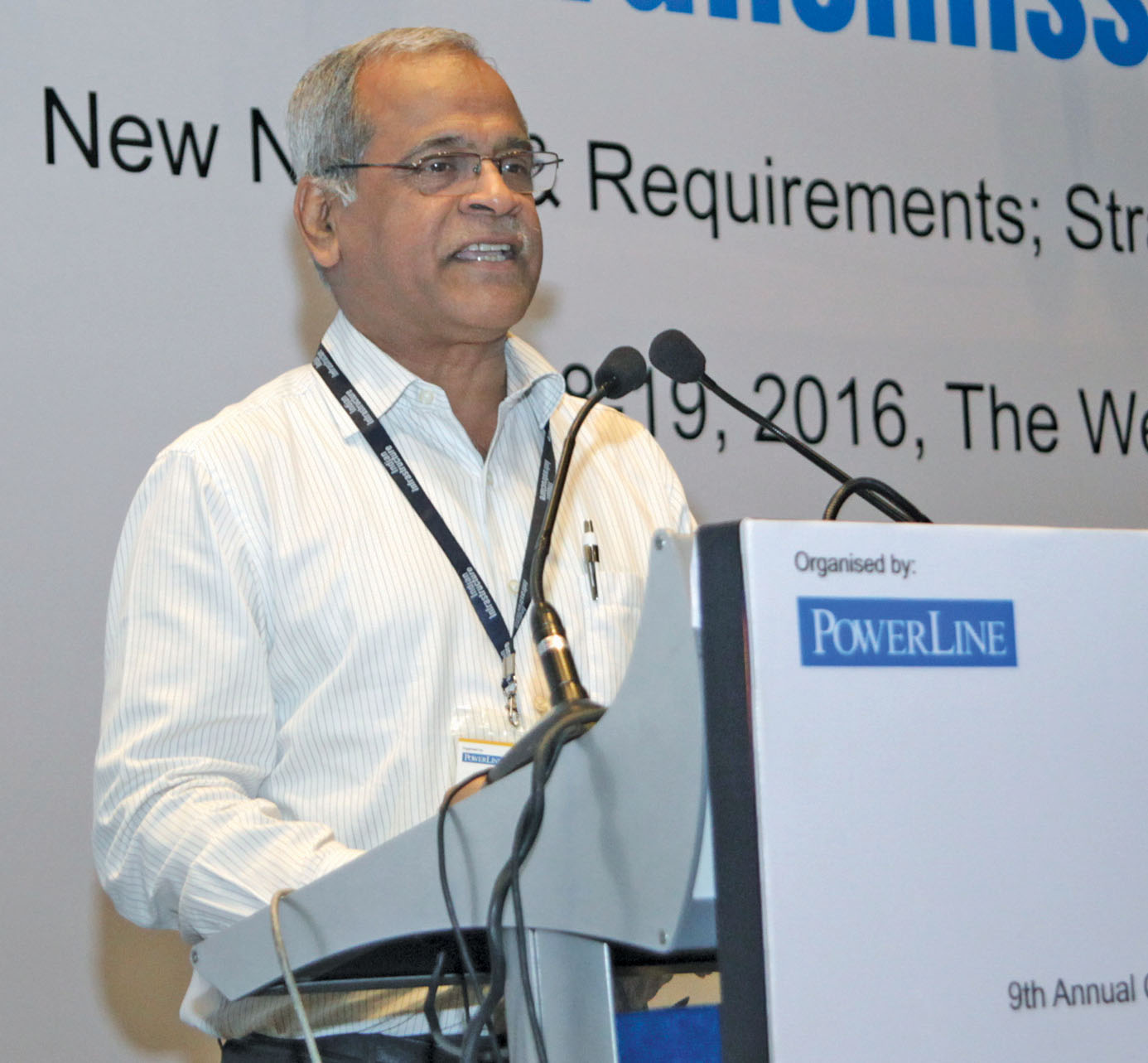 The role of power transmission has evolved considerably over the years, from helping evacuate power generation, it is now becoming a competitor to generation, says S.K. Soonee, adviser and former chief executive officer, Power System Operation Corporation Limited (POSOCO). He adds that with initiatives such as fast response ancillary services and a switch to the 5-minute scheduling, despatch and settlement mechanism, the grid is ready to experience significant changes and that, in the future, transmission would need to be seen as a market enabler. Excerpts from his remarks at a recent Power Line conference…

Transmission is the least understood segment in the power sector. Transmission is hardware; it is wires, towers, conductors, substations and transformers. But it is much beyond that too. Besides hardware, there are some soft and institutional aspects that are usually not talked about and valued much. But, now the time has come to start talking about them. Some of these things are renewables and market.

While we know that the hidden hand of the market can do miracles, beyond a point, it cannot do certain things. For example, planning cannot be left to the market. As far as transmission is concerned, it needs to be planned, and planned seriously. Transmission has become a competitor to generation. Now, the states have the option to choose between adding generation capacity or building up transmission capacity. Planners and policymakers need to see transmission in this perspective – as a risk mitigator, as an insurance. Transmission is a least regretted investment. Normally, transmission investment should not go wrong. If planners thought that power would flow from south to west, but it started flowing from west to south, the transmission is somehow still utilised. But we would need to introspect that what was thought and what is being utilised are completely different.

It has been almost five years since we have a single grid in the country – one nation, one grid and one frequency. Now we have one price too. It is an economist’s delight, a market designer’s dream to have one price for the whole country that too, discovered every 15 minutes by 5,000 participants through double-sided bidding. Transmission has enabled this.

The transmission infrastructure the country has built today is noteworthy. We have a million EHV towers. Further, we have 12 HVDC towers. Very few countries have such an HVDC network. Moreover, all HVDC towers are being controlled from a central place. These HVDCs with remote control facilities are going to facilitate the integration of the large amount of renewable energy.

Yes, we have built such an infrastructure, but it now has to be paid for. Things such as free transmission for certain users are not good for the sector. Of course, policymakers have their own thought process behind it, but this is how we get into trouble gradually. As a market designer, I am concerned about where the money will come from, who will subsidise, how will it work, etc., particularly when renewables are increasing and are going to reach 175 GW. We must think of what can happen.

On the recovery side, gone are the days when one had to pay for every used line. Power is being traded between Jammu & Kashmir and Kanyakumari, literally and physically. Nobody knows whose line is being used to what extent. Now, the transmission system is considered a common carrier and you only know your entry charges and exit charges. It’s a dream how such a design has finally converged.

Further, we all know that transmission evacuates generation and meets the load. But now transmission is to be seen as an enabler for minimising the cost of power. The ultimate objective should be that everyone should have access to the power market and be able to manage their portfolio properly. To minimise costs, only efficient plants should run and inefficient plants should to be shut down. So, what should the planners do? Planners need to analyse that if the all-India market provides cheaper power, can it be drawn and the costly units be shut down. In another scenario, where prices could be very high in the market and the state has a lot of temporary surplus, can it sell it to the market? So, the planners need to assess the transmission capability, import as well as export. This is where the general network access concept comes in. To this end, a discussion paper and draft regulations have already been prepared. It is a very big-ticket reform, which will change the way transmission is perceived.

On the market side, ancillary services have been working for over two years now. The word ancillary has a connotation of being auxiliary, an add-on service, not something that is required. Now, owing to its applications, it is called essential reliability service. Under this, the system operator mops up all the left-over fragmented power supply and puts it into service. With these services, operators are able to offer around 2 GW – up or down – anytime. According to me, cross-border auxiliaries should also be considered. Therefore, the system should be scalable and pluggable. Gradually, the ambit of the ancillary should be expanded to include private plants as well. It should also be done at the intrastate level also. For this, we need a perfect accounting settlement system. The SAMAST (Scheduling, Accounting, Metering Settlement of Transaction) report deals with issues like who will pay to whom, for what, while keeping in view the satisfaction of every stakeholder. Around 20 states are already moving in that direction. Another product, fast response ancillary services (FRAS), is being worked on.

Another important development is the system moving to 5-minute scheduling, despatch and settlement, from 15 minutes. While 15 minutes is good, it is not good enough. Moving to 5 minutes will help in better pricing and more cost effective scheduling of plants. It appears difficult, but it is very doable with the technology available today. A pilot project has been undertaken at the Dadri thermal power station for testing automatic generation control (AGC) systems. Gradually, we will have all other plants also adopting AGC.

A missing link in the power sector was communication. No smart grid technology is good if you do not have a good line of communication between the substation and the control centre. Everything has to be streamlined, whether it is synchrophasors or any other technology. So, regulators have come out with regulations on communication.

Regarding the future, I strongly feel that we must have regulations for how the transmission of tomorrow should be planned. It should not only be technical but have more to do with sharing, governance, systems and processes. Secondly, the planner as a faculty has to develop. This has emerged as one of the side effects of unbundling. Earlier, when the utility was vertically integrated, experts from different areas and segments used to undertake planning as a whole, it was integrated resource planning. Now, generation, transmission, distribution and trading are all done by different entities. So, who does the planning for the state? Hence, there is a need for a planner, one that has with no conflict of interests.

Meanwhile, cross-border transmission is gaining a lot of traction. While it took us almost a decade of shuttling between Dhaka and Delhi to have the first interconnection come up in 2013 (500 MW HVDC), it got overloaded and now the second HVDC is under testing and another one is under construction. There are transmission connections with Nepal, Bhutan and Myanmar too. Cross-border transmission is not simple; it has many more governance issues than those involved in building transmission in our country. However, a lot of work is happening to this end and I look forward to having a SAARC grid in a couple of years.

Storage is a good technology and we should understand every aspect of it. However, wait and watch is my opinion. If it is costly, we should allow the cost to come down. Do not overload the utilities for fancy things as they are already heavily burdened. If storage is needed for getting ready for electric vehicles (EVs), it should be done at the distribution level. EVs will not impact transmission in the grid much. But it will have a lot of issues for distribution. So we should allow all distributed sources to come up rather than utility-scale. I am concerned about whether we can afford large-scale storage. We should first harness the latent capability of available plants before we invest further in storage. Further, there is no doubt about the technological excellence of the 1,200 kV voltage level. But do we need to invest massively in 1,200 kV infrastructure in India? We should be capable of doing it, but not do it just because we are technologically good for it. We must keep the end consumer in mind.