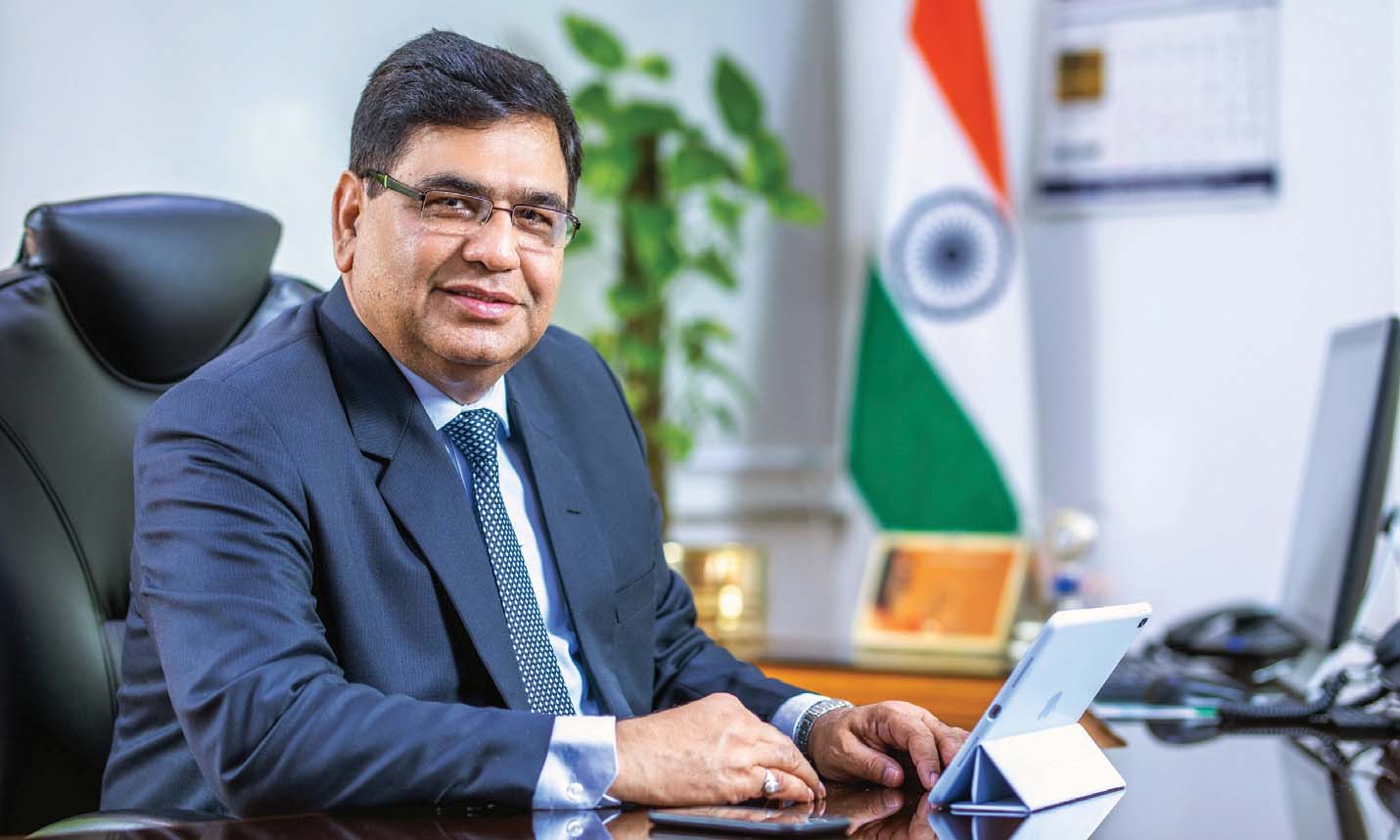 Bharat Heavy Electricals Limited (BHEL), the country’s largest power generation equipment maker, has recorded an impressive performance in the past year. The company’s order inflows rose by 74 per cent in 2017-18 over the previous year, taking its cumulative order book to Rs 1,180 billion, the highest in five years. In line with the changing dynamics of the power sector, the company is actively focusing on areas such as solar, electric vehicles (EVs), transportation and defence. In an exclusive interview with Power Line, Atul Sobti, chairman and managing director (CMD), BHEL, shares his views on the power sector’s performance, and the company’s achievements and future growth strategy…

What is your perspective on the current state of the power sector? What have been the major positive developments over the past year?

Things are looking up in the power sector. The resolution of the stressed power assets is in sight. The trend of declining plant load factors has been arrested. As per the recently released Load Generation Balance Report, the Central Electricity Authority expects the base power demand to increase more than 10 per cent year on year, which is higher than the GDP growth forecast for 2018-19 and signals demand revival. Spot prices on the power exchange are also moving upwards. Over the past five to six years, the interstate transmission capacity has witnessed robust additions. The Ujwal Discom Assurance Yojana has seen a good start as discom losses have reduced by almost 40 per cent. Also, the average revenue realised-average cost of supply gap of discoms has reduced significantly. So, overall, various initiatives taken by the government have started fetching results. Better days for the sector are visible in the near future.

What have been the green shoots for equipment providers in the power sector?

As per the National Electricity Plan, the country will require an additional thermal power generation capacity of 46 GW and around 48 GW of capacity will go for replacement during 2017-27. So, almost 100 GW of new capacities will come onstream in the next 10 years. As various issues of the sector are being gradually resolved, we will see a resurgent and steady demand for equipment in the coming years. We are already noticing increased activity among customers. In the short term, demand for emission control equipment and systems, replacement of old subcritical thermal sets, large-scale ordering in the solar segment, development of nuclear power projects and demand from neighbouring countries will create opportunities for integrated manufacturers like BHEL.

How has been the ordering activity in the emission control equipment market in the past one year? What are the key concerns of equipment providers?

Ordering in this segment is picking up. NTPC Limited alone has tendered for stand-alone flue gas desulphurisation (FGD) packages for projects aggregating 30 GW. Central and state utilities have commenced ordering for boiler and electrostatic precipitator modification and emission control equipment. We have developed comprehensive capabilities of engineering, integration and execution in association with global technology leaders. So far, we have garnered around 20 GW of FGD and 9 GW of selective catalytic reduction packages. This makes us a very competitive player in the market.

What have been the key achievements of BHEL’s power business over the past year?

Resilience is the biggest achievement of our power business, in fact of the whole company. In recent years, we have swiftly integrated with the new realities of the external economic and business environment and regained growth. As a result, in a shrunken and highly competitive Indian power market, we were able to reinforce our leadership position by securing all orders for thermal power projects during 2017-18. Total orders won during 2017-18 were worth Rs 409.32 billion, 74 per cent higher than those in 2016-17. We won the 2,400 MW (3×800 MW) Patratu power project, the largest ever power sector order in the country awarded on an international competitive bidding basis. We also won an order for the supply of four steam generators for the 1,400 MW (2×700 MWe) Gorakhpur-Haryana nuclear power project. With this, we have over Rs 1,180 billion worth of orders in hand, the highest in the past five years.

What are some of the technologies expected to play a key role in the power sector? What is the status of the research and development (R&D) project based on advanced ultra supercritical technology under implementation?

Scalable and high efficiency low emission technologies for utilising indigenously and abundantly available coal are very important for our future. So, the government has mandated BHEL, NTPC and the Indira Gandhi Centre for Atomic Research to develop advanced ultra supercritical technology for thermal power plants. This will lead to a quantum jump in the efficiency levels of thermal power plants to 46 per cent. In the R&D project, significant progress has been achieved in systems engineering, overall plant layout engineering, design of major equipment, material technology and manufacturing of key components. In addition, digitalisation, energy storage and power systems with grid balancing and peaking capabilities, like pumped storage, will play a pivotal role in the ongoing energy transition.

What are some of the major power sector projects that BHEL is implementing at present in India and overseas?

Currently, we are executing more than 25,000 MW of power projects in the thermal, hydro and nuclear segments for the domestic market. Some of the major ones are Yadadri, Bhadradri, Patratu, North Karanpura, Gadarwara, Udangudi, Uppur, Ennore, North Chennai, Panki, Bhusawal, Parbati, Vishnugad, Palamaru Rangareddy, Kakrapara and Rawatbhata. Overseas, we are executing 21 projects aggregating 5,000 MW across 13 countries. Some of these are at Maitree in Bangladesh, Arun in Nepal, Mangdechhu and Punatsangchhu in Bhutan, and Sendou in Senegal.

What are the key growth areas for the company going forward? What are BHEL’s plans in the EV segment?

Our long-term goals and targets are strongly supported by the increase in the share of business from “non-coal” areas to 50 per cent from the current level of 30 per cent. In the solar business, we are venturing into new areas such as floating solar photovoltaic plants, solar tracking systems, etc. We have designed and developed state-of-the-art insulated-gate bipolar transistor-based three-phase drive propulsion equipment for India’s first ever air-conditioned AC-EMU train for the Mumbai suburban application. This AC-EMU has been successfully running passenger service since December 2017. This has opened up a new stream of opportunities for us in the transportation business, having already received orders for 12 more rakes. The company is building strengths to leverage emerging opportunities in urban transportation including metros and high speed trains. Efforts are under  way for the expansion of defence and aerospace portfolios as well.

To harness the growth opportunities in the water business, the company is strengthening its existing business models and adopting new ones. Its entry into the municipal segment, in sewage treatment plants, is the first step in this direction. For growth in its transmission products and systems business, the company is focusing on improving its engineering, procurement and construction and enhancing its technology capabilities. Further, an “energy storage solutions group” has been created to leverage business related to grid-level energy storage as well as solutions for EVs. In the EV segment, BHEL is building its in-house development capability, while at the same time exploring transfer of technology to establish BHEL as an end-to-end integrated e-mobility solutions provider. Recently, BHEL supplied the DC-001 fast charger, which has been installed in Udyog Bhavan. In-house developed motors, propulsion systems and high capacity battery chargers are undergoing testing at the Automotive Research Association of India. Overall, the thrust on diversification resulted in an upsurge of order inflows in 2018-19, with the industry business recording the highest level of order booking in 2018-19 during the last six years.

What is your outlook on the future of the industry in the long term?

India is the fastest growing major economy in the world. Supported by the demographic dividend, technology developments and economic reforms, it is envisaged to become a $5 trillion economy by 2025 and $10 trillion by 2030 from the present $2.6 trillion. Massive investments are slated in railways, ports, urban infrastructure, environmental solutions, and core industries like cement, coal, steel and petrochemicals in the coming years to fuel India’s growth aspirations. So, the industry will have humongous opportunities in the energy and infrastructure sectors, particularly in the areas of clean energy, energy storage, e-mobility, emission control equipment, urban transport and infrastructure development, among others.