Indian coal has a high ash content of 35-45 per cent, and its combustion causes significant air pollution. The practice of surface mining or open cut mining for coal extraction in India contributes to the high ash content as this technology has limitations with regard to the separation of impurities from coal. Due to this, a significant amount of ash is transported along with coal over long distances, resulting in high transportation costs. In some cases, the quality of coal also deteriorates with deeper excavation being carried out inside a mine. Owing to the high ash content in run-of-the-mine (RoM) coal, its disposal and handling also become challenging. Further, higher maintenance and capital costs increase the per unit cost of the coal. In light of these challenges due to poor coal quality, there is a need to adopt coal washing. Coal washing is a process of refining or cleaning coal undertaken in a coal washery or a coal preparation plant. 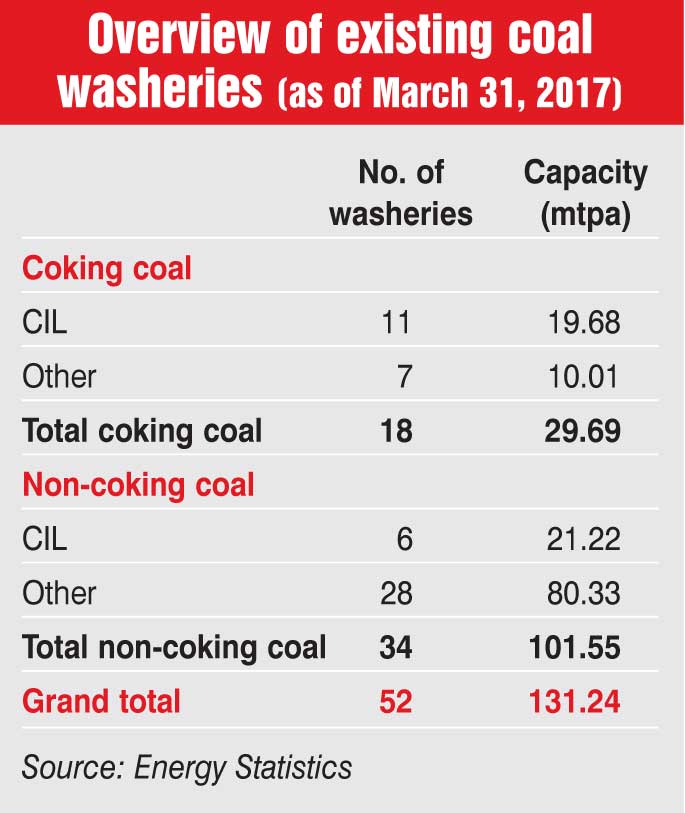 In terms of ownership, of the 52 washeries, 17 are owned by Coal India Limited (CIL) and the remaining 35 are owned by the private sector and PSUs. In the non-coking coal segment, CIL operates six washeries aggregating 21.22 mtpa and private players operate 28 washeries aggregating 80.33 mtpa. In 2017-18, two coal washeries were commissioned by Bharat Coking Coal Limited (BCCL) – Dahibari (1.6 mtpa) and Patherdih (5 mtpa).

Policies and regulations for coal washing

In 1997, the then Ministry of Environment and Forests mandated that all power plants located at a distance of 1,000 km and beyond from the pitheads or located in urban areas, and environmentally sensitive and critically polluted areas, irrespective of their distance (except pithead stations), will use beneficiated coal with an ash percentage less than 34 per cent from June 1, 2001.

Further, any stand-alone thermal power plant (TPP) or captive TPP of 100 MW and above capacity located beyond 500 km from the pithead will use raw coal or blended coal or beneficiated coal with an ash content less than 34 per cent and a gross calorific value not less than 4,000 kCal on an daily average basis from January 1, 2014.

Any stand-alone TPP, or captive TPP of 100 MW and above installed capacity beyond 1,000 km, located between 750 km and 1,000 km and located between 500 km and 749 km from the pithead will use raw coal or blended coal or beneficiated coal with an ash content less than 34 per cent on a quarterly average basis with effect from January 1, 2015 and June 5, 2016 respectively. 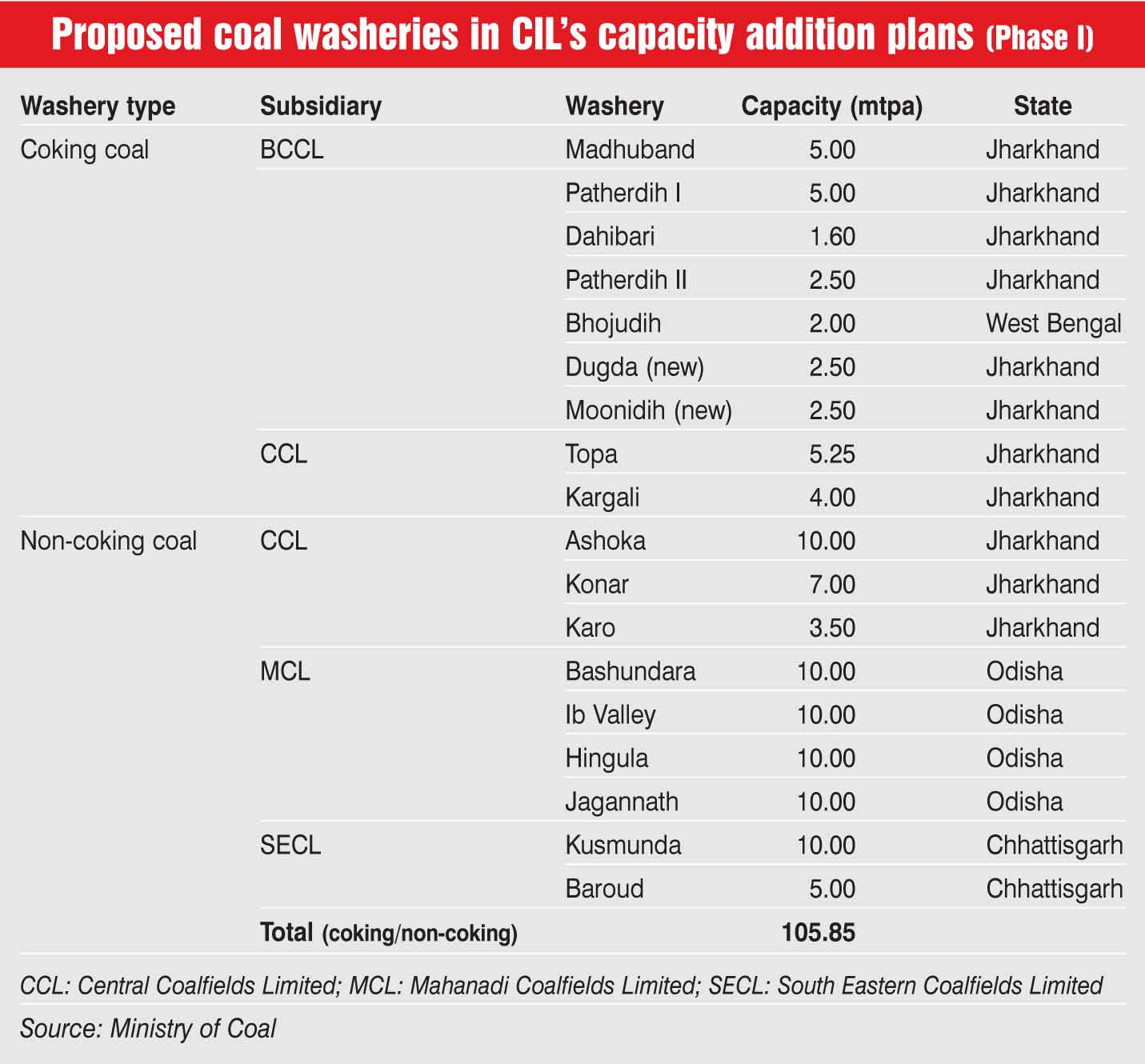 Unlike in countries such as Australia, the US and South Africa, coal washing is not an integral part of coal mining in India. India has been slower than other countries in adopting coal beneficiation for thermal power generation. The reasons cited for the slow uptake include the lack of stringent emission standards and the misleading perception that coal beneficiation adds to the cost of electricity generation.

In India all the coal produced is not subject to beneficiation/washing. The output of the washed coal is directly proportional to the quality of the raw coal received from the mines. However, the quality of the raw coal received at the washery does not correspond to the quality the coal company commits to the consumer. Further, a reduction in the quantity of washed coal results in lower output. This decline, both in qualitative and quantitative terms, is compelling consumers to go for washed coal. 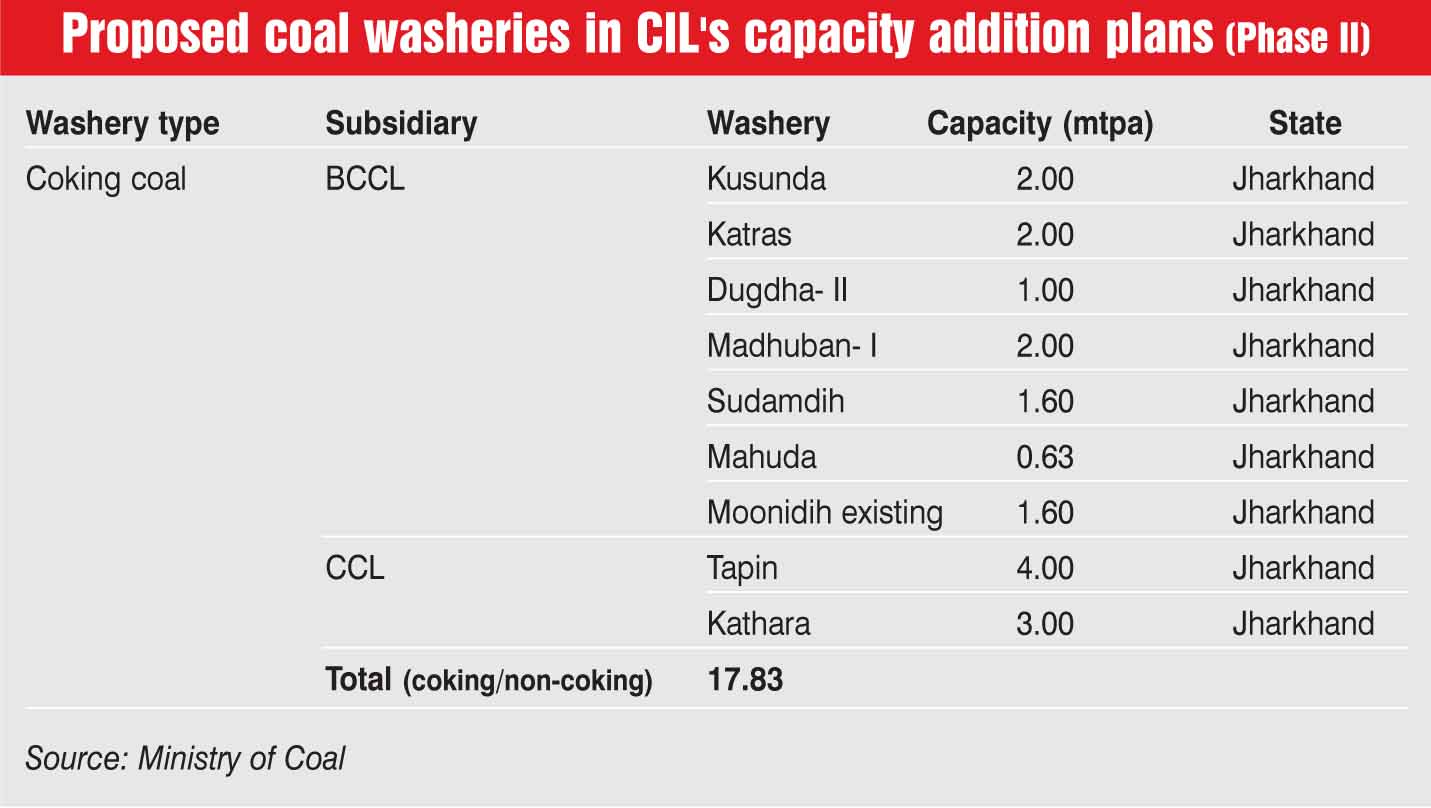 Washed coal offers several benefits such as making the unloading easier in coal handling plants, improving the mill performance in power plants and saving on the cost of ash handling plants. It further eliminates the challenge of coal reject disposal. However, despite these advantages and the huge market opportunity for coal washeries, the industry faces low capacity utilisation and the challenge of setting up new washeries. In this regard, various steps are being taken by CIL. It plans to enhance the washing capacity of coal washeries and introduce technology advancements in coal washing. There is also a need to explore the possibility of coal washing by consumers.

The measures will not only help meet CIL’s commitment towards emission reduction but may also prove economical as it will help reduce coal import, thereby saving valuable foreign exchange. These steps will give a boost to the coal washing industry and improve coal quality across the country.